The final weekend of Season 2 has come to an end and we now know the final three competitors moving on to the Global Finals at BlizzCon.  After the initial 7-week Round Robin stage, the top 4 players from each group advanced to this weekend's playoff portion.  The 24 Grandmasters competed in three 8 man tournaments to crown a winner from each region.  They move on to join the three winners from Season 1 and two winners from China's Gold Series to complete the field for the Global Finals where we'll crown the 2019 Hearthstone World Champion!

The VODs of all the weekend's match-ups can be found over at the PlayHearthstone Twitch Channel.

The weekend got underway with two Team Genji teammates squaring off. Nalguidan was able to handily defeat Monsanto, 2-0. The tables turned in the next match-up however, and Nalguidan took a loss to the Group A leader, Eddie, 2-0. With the win, Eddie punched his ticket to the semifinals. We then saw Monsanto's second chance at advancing fall short once again as he lost a tightly contested series to Fr0zen, 2-1. Needing just one more series to advance, Fr0zen and Nalguidan squared off with Nalguidan winning another tight one, 2-1.

Group B saw bloodyface get off to a quick start, defeating Purple 2-0. He moved on to meet the leader of Group B, justsaiyan, and again easily defeated him 2-0. Bloodyface quickly advanced to the semis. Representing Tempo Storm, Purple needed back-to-back wins to advance to the semifinals. His opponents were former Tempo Storm members, justsaiyan and muzzy. In two hard fought match-ups, Purple was able to take each series 2-1 to move on.

The first semifinal matchup saw Eddie and Purple trade the first two games, each scoring a win with their Druid decks. With the series tied 1-1 the players queued into a Shaman mirror, which Purple was able to pull out to take the lead in the match. Having his Warlock deck banned, Purple still had his Combo Priest available -- widely considered the best deck in the game. He queued into Eddie's Hunter and took the win to move into the finals.

The remaining semifinal match saw both bloodyface and Nalguidan shield their Priest decks, and they immediately moved into a mirror match in game 1. Bloodyface won the Priest battle and then took a commanding lead as he won game 2 with his Highlander Hunter over Nalguidan's Druid. Not to be out matched, Nalguidan fought back in game 3 and took a win with his own Hunter deck. In the end, Nalguidan's comeback wasn't meant to be as bloodyface scored a win with his Druid to take the series.

A proper way to kick off the Season 2 Grand Final -- Purple and bloodyface started the series with a Combo Priest Mirror. An unanswered Lightwarden allowed Purple to get an easy turn 4 victory as bloodyface conceded with lethal damage staring him in the face.

Leading the series 1-0, Purple moved on to his Zoo Warlock deck while bloodyface stuck with the Priest. With bloodyface not drawing any of his combo pieces, Purple was easily able to take the board and never looked back. His early Sea Giant carried him to another early landslide victory. Purple was dominantly ahead, just one win from BlizzCon.

Game 3 brought us Purple's Quest Druid versus bloodyface's Highlander Hunter. Keeping this series consistent, this games was yet another beat down. But, this time it was bloodyface who couldn't be answered. His Hunter deck curved perfectly and Purple had no answers. Bloodyface was able to score lethal damage before the Druid could even take a turn with it's completed quest.

The players queued into a Druid mirror for game 4. The game remained close through much of the early game as both players moved towards completing their quests. However, the second portion of the game was dominated by bloodyface. After dropping an early Nourish he moved into a huge Kun the Forgotten King turn. Purple instantly conceded and the series was tied 2-2.

We moved to a game number 5 to determine who moved to the Global Finals. Purple had his Druid deck remaining, facing off against bloodyface's Combo Priest. It took only six turns and 2 hits from an 18-attack Northshire Cleric for bloodyface to win via reverse sweep and claim his spot at Blizzcon 2019!

Friday saw Group A's action in Europe, with SilverName getting 2 convincing wins in the first 2 matches to secure his place in the Semis. Pavel then beat Bunnyhoppor, eliminating him before falling himself to Hunterace, who also made the Semi Finals.

Saturday saw Group B's action, where Kolento was defeated by Casie who then lost to Jarla in the Winner's bracket, leaving Jarla to move on to the Semis. Kolento then lost again, to Thijs, exiting the tournament. In the group B Loser's bracket Casie beat Thijs to secure his spot in the Semis.

In the Semis SilverName and Casie first battled in a Priest mirror match and then a Druid mirror match, both of which Casie won. SilverName then used his Druid to beat Casie's N'zoth Warrior, before Casie finally punched his ticket to the Europe Grand Finals with his warrior against SilverName's Priest.

In the other Semi Final it was Hunterace up against Jarla in a match up of regular season no. 1 seeds. Their first game was a Paladin mirror match, where Jarla was forced into taking a 1 in 3 gamble to either win or lose. His Holy Wrath did not pick Shirvallah, the Tiger however and Hunterace won on the next turn. Jarla evened up the series in the next game by winning with his Paladin. That lead to game 3 where Hunterace won with his Priest deck, before a final Shaman mirror match in which Hunterace was victorious too. He made it to the Grand Finals with a chance to make it to Blizzcon to defend his title.

The first game in the Europe Grand Final, with a spot at Blizzcon on the line, was over before you could blink. Hunterace played a slow Druid deck against Casie's Priest deck and got hit with a 10/10 and then a 20/10, the turn after completing his Quest.

The second game did not go Hunterace's way either. Casie started quick again with Quest Shaman against the slow Druid deck and on top of a big board, managed to Evolve his Mogu Fleshshaper into a Ragnaros the Firelord, against a clear board, leading to 8 damage to Hunterace's face, who almost immediately conceded.

In the last game things didn't go Hunterace's way again, to the point where he put his head on his desk for a good 20 seconds, even when his turn had already started. He did fight on bravely against impossible odds till fatigue, but Casie's N'Zoth Warrior deck easily won in the end and Casie is going to make his way to Blizzcon in a few weeks!

In the Asia Pacific Group A, Tyler got off to a great start, winning 2 tight games to move to the Semis. His opponent in the opening match, glory, then went up against Alutemu and lost again, moving Alutemu to the Loser's Bracket against Che0nsu. In a tight game che0nsu had to turn it around, but did and won the match to move on to the Semis.

In group B DawN pulled off the same trick as Tyler had, winning twice early to secure his place in the Semis. Surrender, who had lost the opening match to DawN, then convincingly beat Shaxy to move to a Loser's Bracket match up against tom60229, but he was no match for the regular season no. 1. We will still see Surrender at Blizzcon however due to his win last season.

In the first Semi Final for Asia-Pacific Tyler couldn't get it done with his Shaman deck in the first game, against tom's Paladin, but did win the second one in a Shaman mirror match. With the match tied tom60229 played the better games and won the last 2 games with Shaman and Warlock.

The other Semi Final between DawN and che0nsu came down to the wire in this best of 5. After a thrilling series the match came down to the match up between DawN's Control Warrior and che0nsu's Holy Wrath Paladin. With an aggressive start, where DawN even played an Omega Devastator as a vanilla 4/5, just to increase pressure. It worked after a fashion, because he got che0nsu down to 7 health, but then didn't draw anything to really continue putting on the pressure (something Warrior decks are not meant for in the first place) and che0nsu didn't panic and started working his way back in. In the end che0nsu's clutch Emperor Thaurissan, that had discounted pretty much all of his combo pieces, meant that DawN's 48 health and armor combined couldn't withstand the 50 damage from 2x Holy Wrath that che0nsu pumped into him, sending che0nsu to the Grand Finals.

The Asia-Pacific Grand Finals opened up with tom60229's Holy Wrath Paladin against che0nsu's Highlander Hunter, which che0nsu won decisively with pressure from the start. It was followed up by a Shaman mirror match, where tom turned a good start by che0nsu around and even used Plague of Murlocs on his own full board to improve it's quality for the lethal boardstate the game ended with.

After equalizing the series the next game was tom with his Warlock deck against che0nsu's Holy Wrath Paladin. Tom turned a spawned Flamewaker into helping get exact lethal. Che0nsu, on the brink of elimination, brought his Quest Shaman out against tom's Holy Wrath Paladin, and was leading the game from the start, though it did take long for it to turn into a game win.

So in the end things came down to a Holy Wrath Paladin mirror match. It was a game with many twists and turns, where che0nsu took a shot of 1 in 3 to win the game, but failed and tom60229 turned some smart plays into a win by 1 fatigue damage to che0nsu. Tom is moving to Blizzcon to potentially be the first 2 time World Champion!

Tom never played his Priest deck so we didn't get to see it and it's not uploaded on the official website.

The Global Finals will be held at BlizzCon 2019 in November. The 8 players who have qualified for their chance to become Hearthstone's next World Champion are: PNC, bloodyface, Fenomeno, Casie, Surrender, tom60229, VKLiooon, & Leaoh. 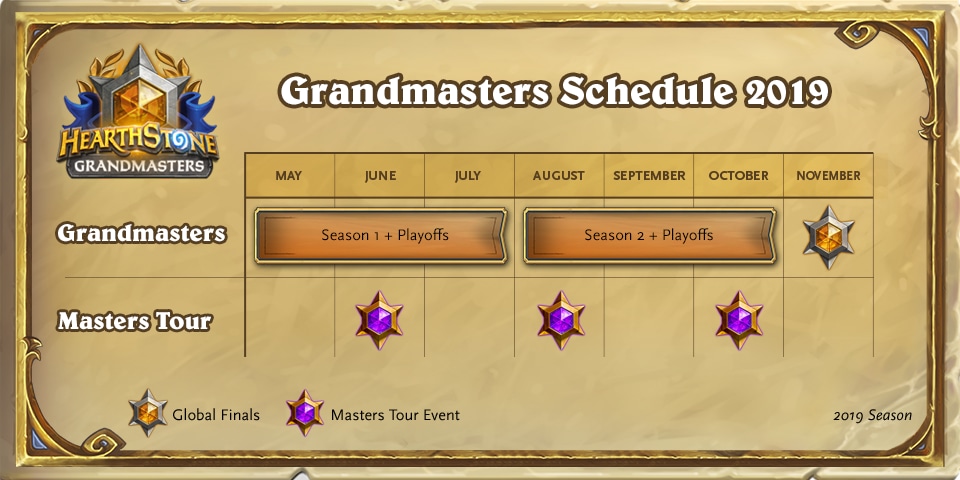 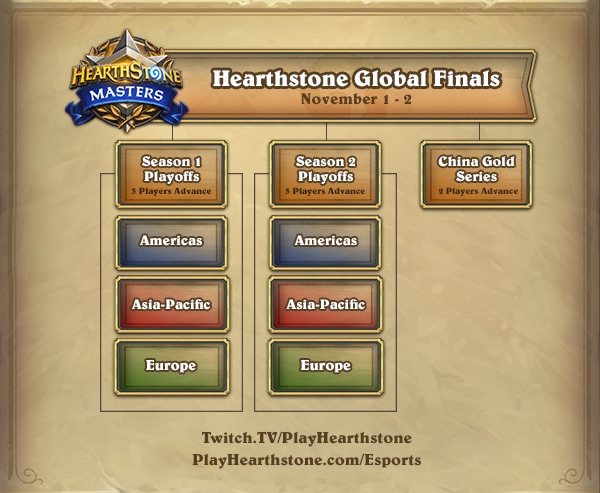