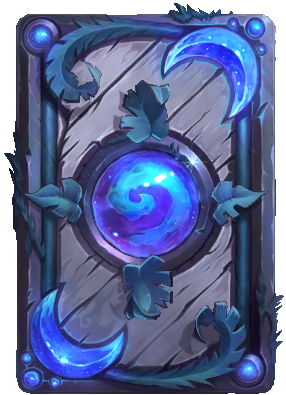 The People Who Are Solving it.

First of all, none of this would have been possible without the awesome community at the WoW Secret Finding discord. They put their resources together, made Google sheets and discussed plans to solve all this.

You can join their community and help out with this secret and many others, right here: discord.gg/wowsecrets or find them on their twitter account, over here: https://twitter.com/secretfinding

What do we know?

There are 2 Achievement steps tied to this, and each step will likely be a Puzzle to solve. 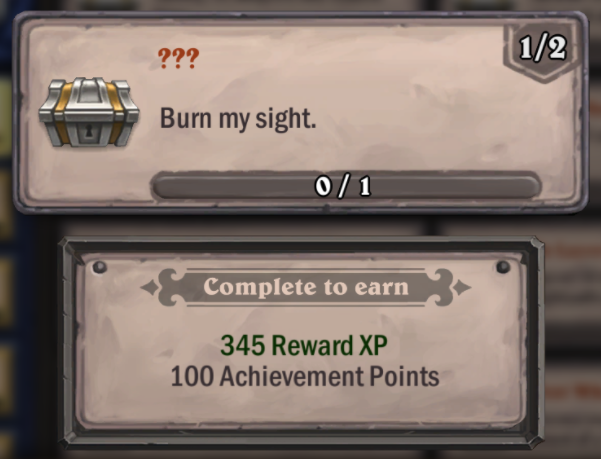 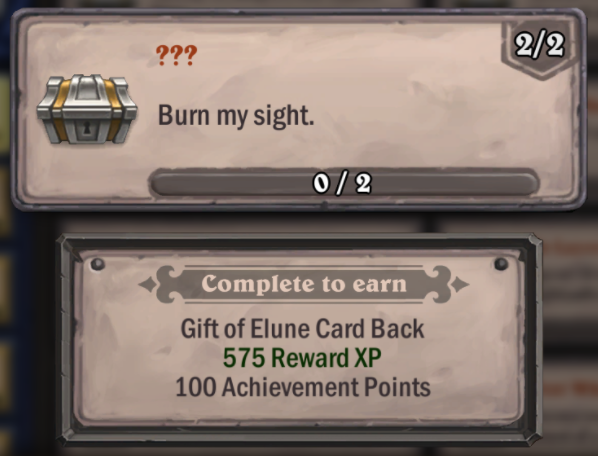 The start of puzzle 1 was figured out fairly swiftly based on clues on the achievement: Burn My Sight. The rest of the solution was first done by user Windjammer and the map displayed below was made by user Jay8Kay. 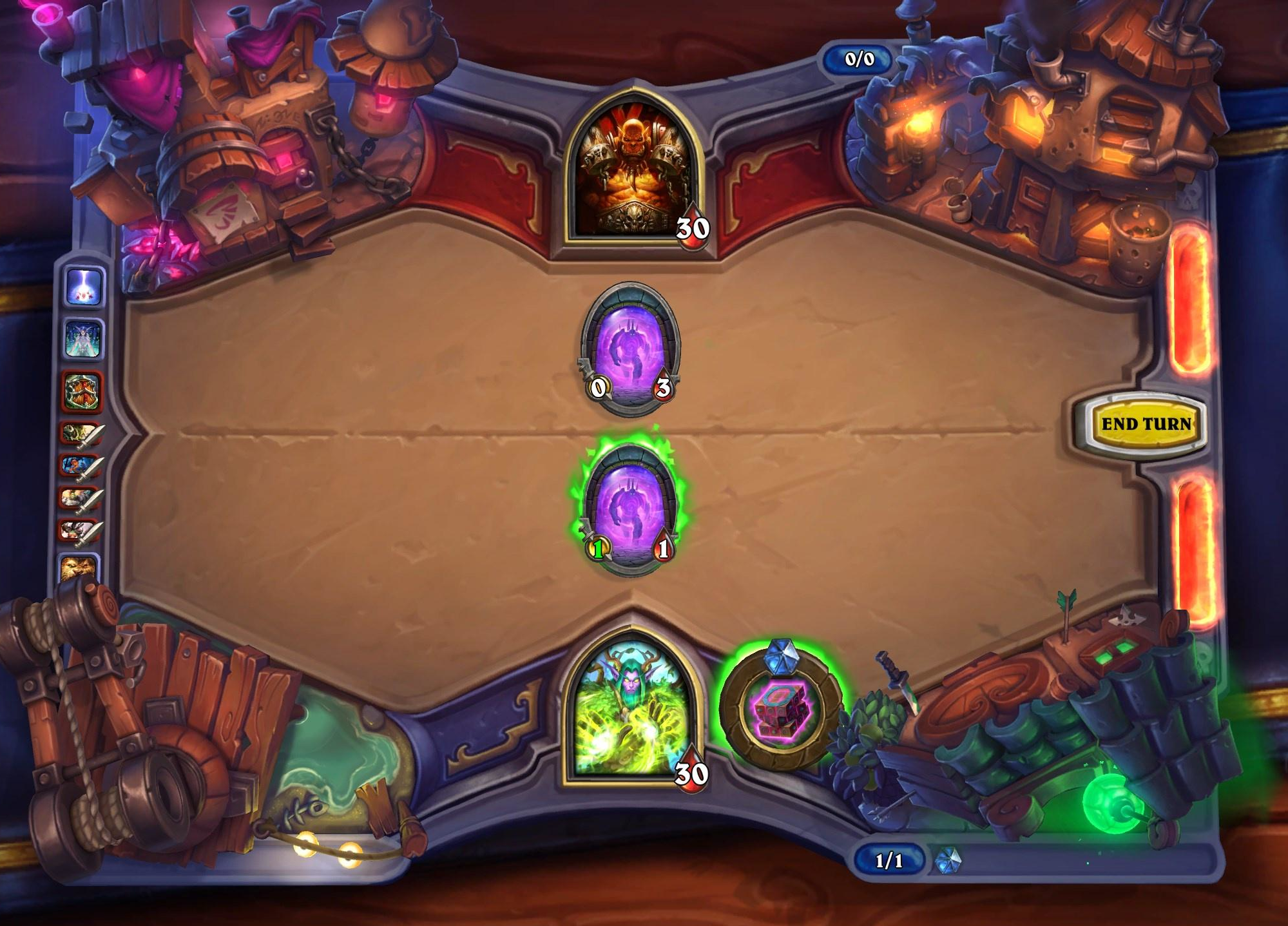 From this point you need to hit specific portals with your active minion and occasionally switch sides to do that by using the "Hero Power" button. Just follow the red line on the map and use the hero power to turn the puzzle to hit the correct portals when applicable. The goal is to get every portal to 1 health at some point during the journey through it all. The solution is as follows:

If you would rather have a written out solution.

You can try the solution posted in this pastebin here. The solution was not tested by us personally but it was confirmed to work on the Secret Finding Discord!

The start of Puzzle 2 was hinted at when you complete Puzzle 1, which ends with Ysera the Dreamer getting hit with Lunar Eclipse. You do NOT have to complete that step in 1 turn. You can play Ysera one turn and Lunar the next. Just make sure Ysera survives, obviously.

The puzzle you are faced with will look something like the following image: 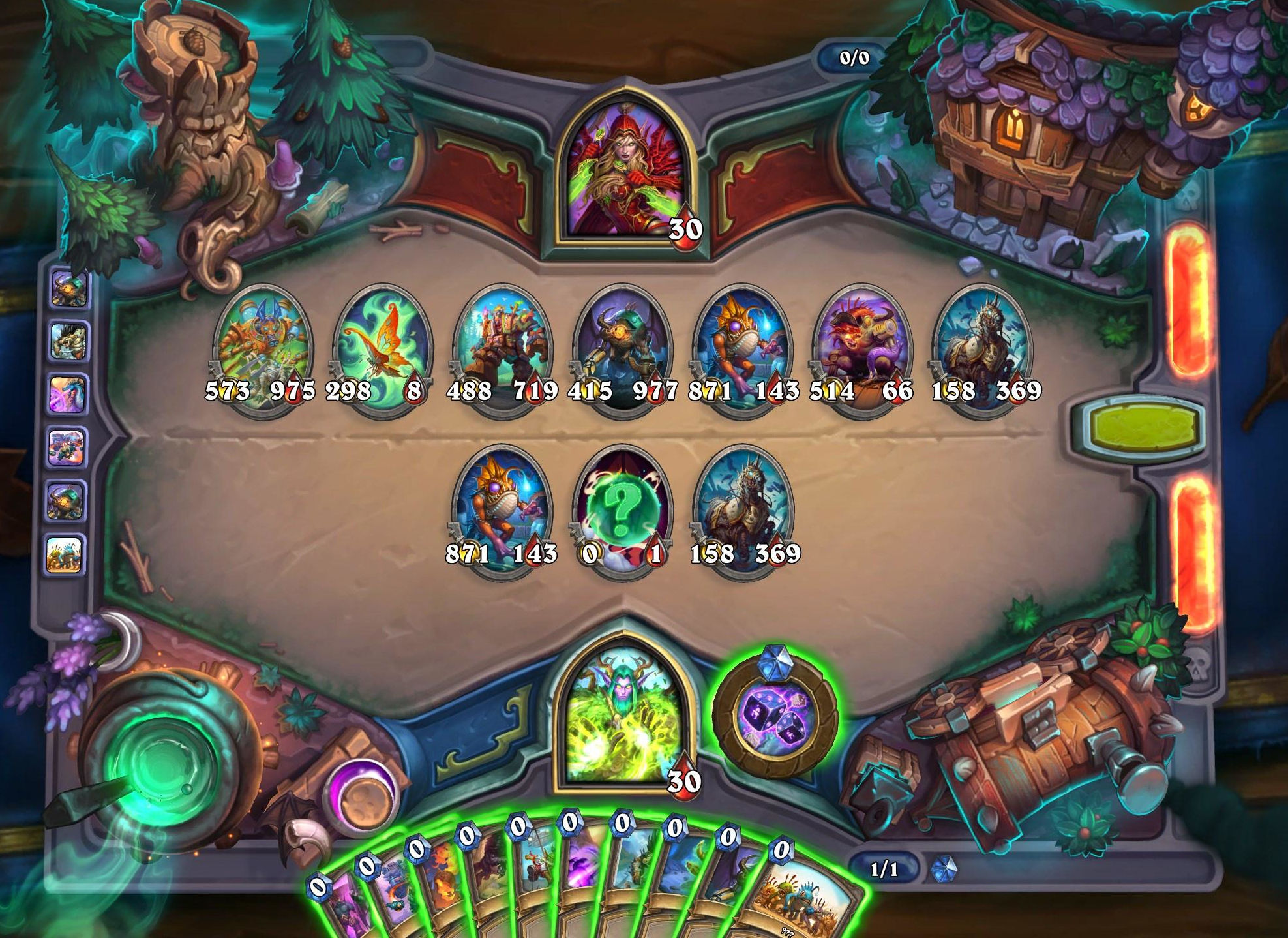 What you have here is a board full of different Tribal minions. Everyone's board will look different! What they all have in common is that there are 2 Tribal Minions flanking a Minion with ? on it at the player's side of the board. You will also notice you have a hand full of cards related to Tribes. Every Tribe it's own designated card. These are Twinspell cards so they do not move in your hand when you use them.

The Tribe cards all correspond to a NUMBER, in the same order as they are in your hand, going left to right from 1 through 9 and 0 at the end as the last card. To write it out:

The Solution to Phase 1

The goal in Phase 1 is to use the cards you have to input numbers on the ? Minion on your side of the board, by "buffing" it. These need to be specific numbers though or the puzzle will reset and all the minions, except the ? will change. Make sure to follow the following strictly or you will have to do it over again from the top. 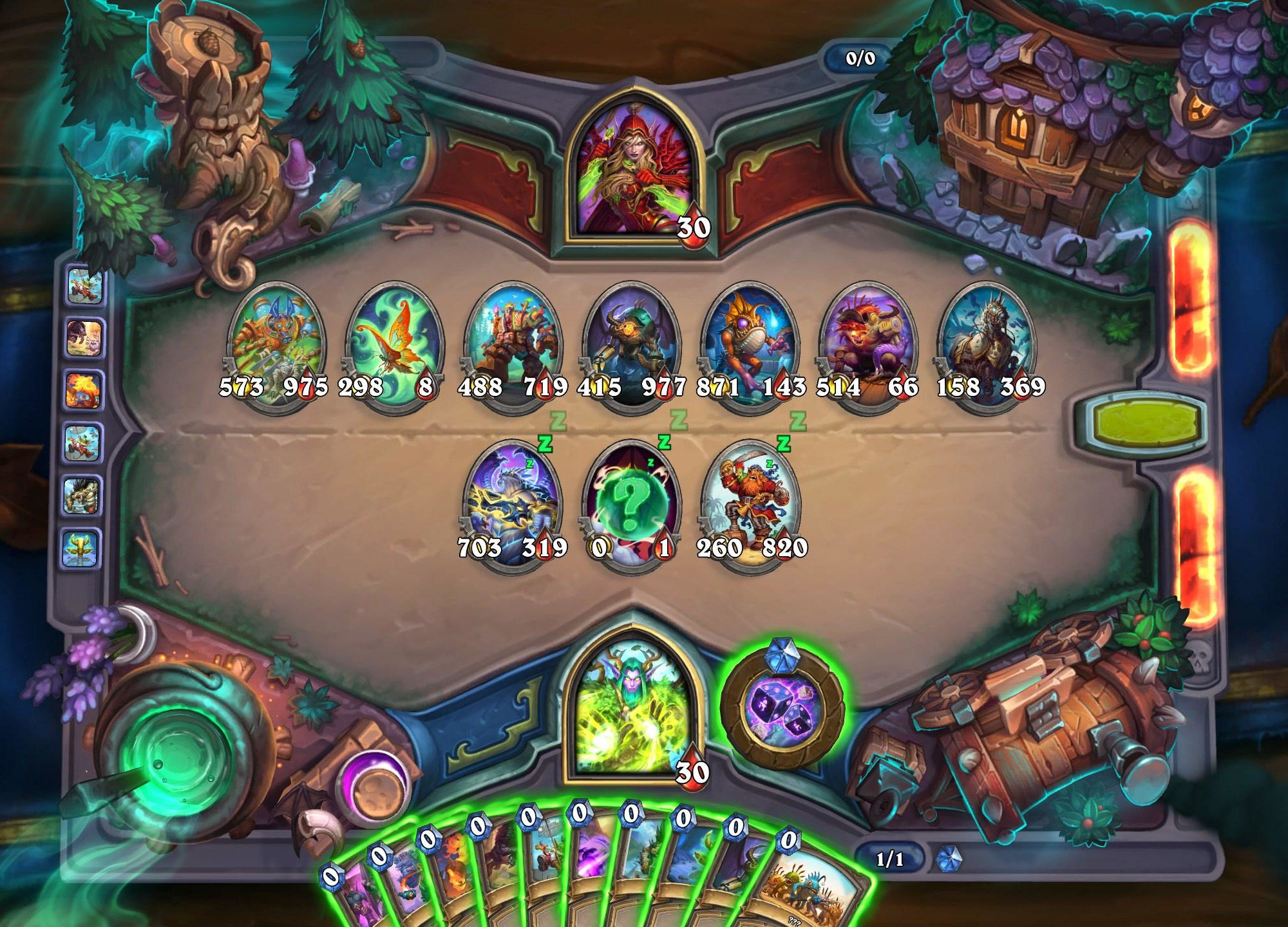 the Solution to the Second Phase

Fortunately you have now done the hard part. You should understand how the puzzle works and all that is left is to use the same method as above to input numbers, with the added benefit of not having to do math to get the numbers, because we simply have a list. As you might guess it was not supposed to be all this easy, but some clever, dubious people figured out a way to get information they weren't supposed to have.

All that's left is to claim the prize. Go to your Achievement section and find the achievement and click it. You will then get the pop up with the card back and some hard earned Reward track xp. 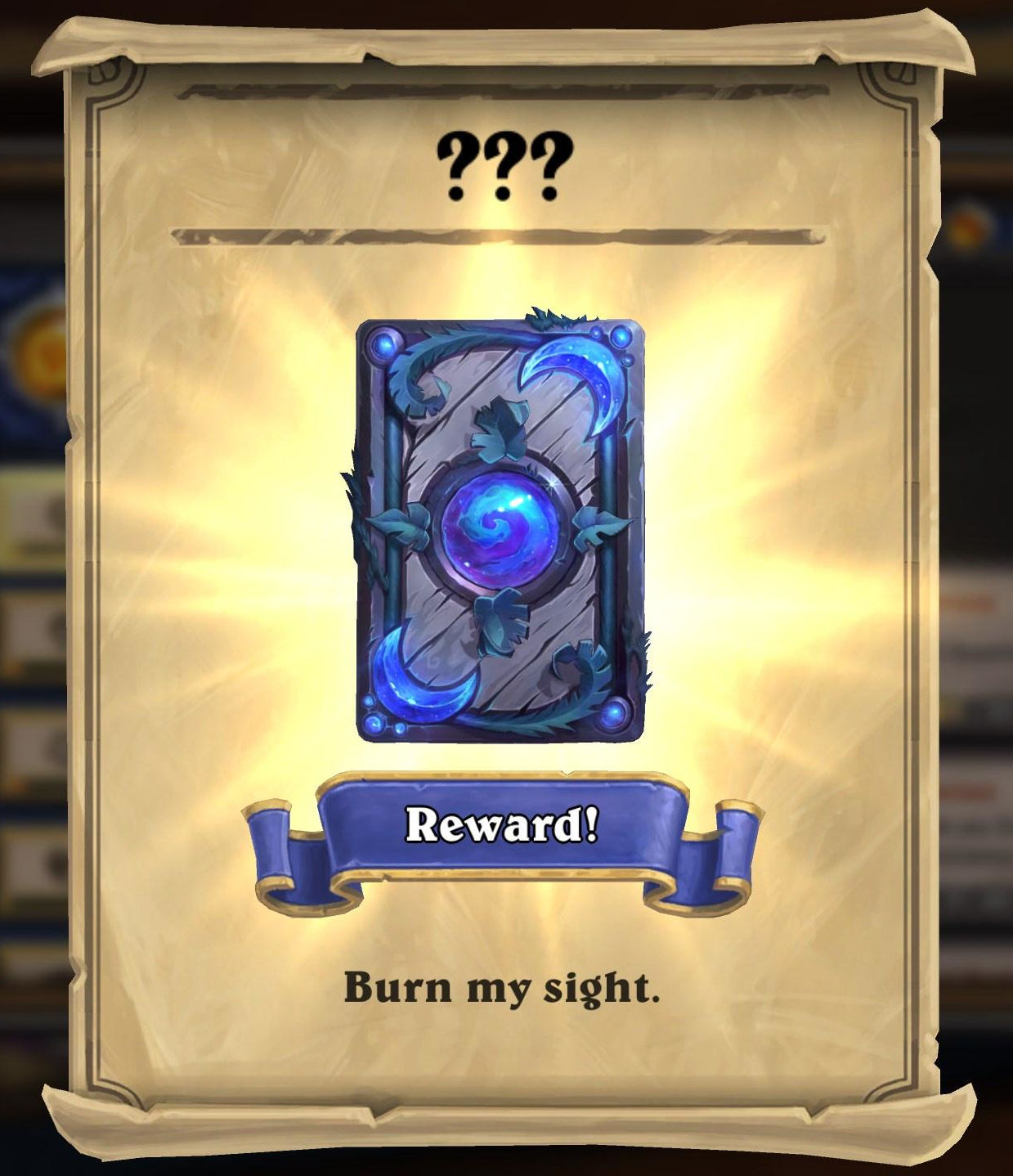 Thanks to Celestalon and the Hearthstone team for making the Puzzles and the Secretfinding community on Discord for helping to find the solutions to all this. We hope you have enjoyed these solutions and will see you next time there is a cool Mysterie!