I'm still tinkering with this, but it's a lot of fun at low ranks for now. This deck revolves around abusing Candle Breath in the early game and either out-tempo your opponent mid-game or out-value them in the mid-to-late game. Much midgame healing comes from Khartut Defender and Zilliax.

Sometimes in the midgame, say turn 6+, you can play things like Candle Breath + Mountain Giant with 8 or less cards in hand. So even if you havent' drawn a giant yet, you could risk the three draws (if you have a dragon) to pray for a giant.

It can be a really powerful deck, I think, but it requires much thinking ahead and knowing what you're up against to pick the right options from your discover cards. It also helps to make sure that you always have at least one dragon in hand as an activator. This also makes picking one late game dragon in the early game an OK choice, even if you can't play it, since its sole function then is being an activator for the rest.

There are other fringe surprise plays and combos, like Bloodsail Flybooter and however many of the pirates you can get + a randomly discovered Cannon Barrage. The deck is quite slow, but there is a lot of value and strategies to play with. Really fun if you like discover and value plays :)

Early game is just focused on survival and/or growing your hand using cards that either replace themselves or add more cards to your hand. The dream in every game per turn, is: 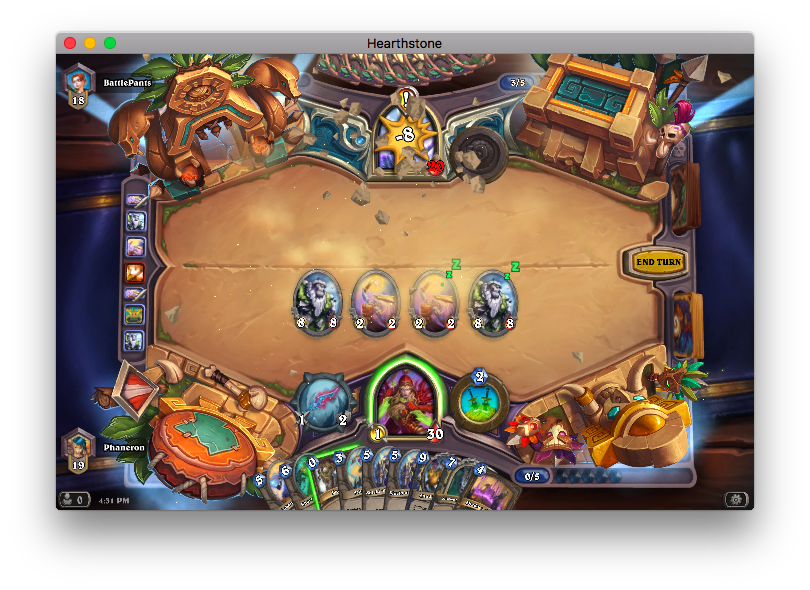 Against zoo it should look like this (for this run I subbed 2 x Hench-Clan Thug for 2  flybooters): 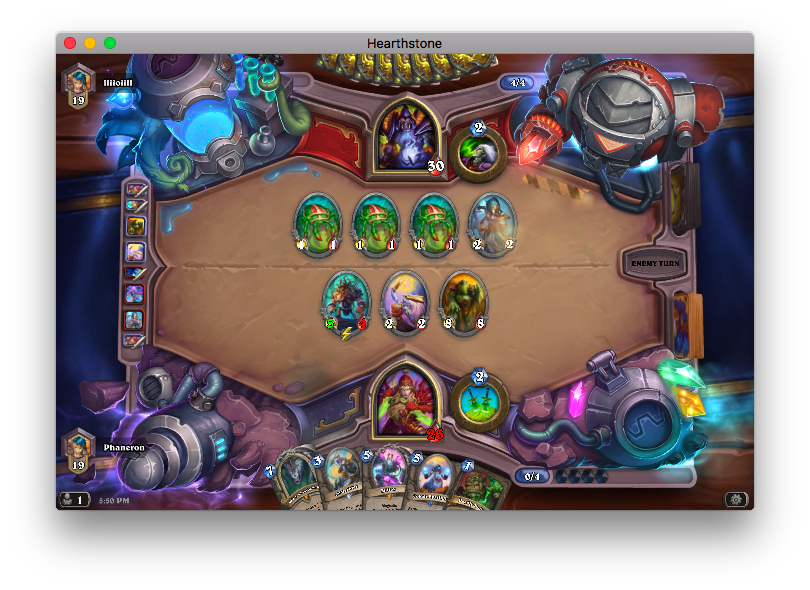 When it comes to lackeys, consider saving any Titanic Lackey you get, it can be crucial in taunting your giants or bigger dragons. Note that Draconic Lackey can also give you dragons, so the sources of dragons are not just limited to Dragon's Hoard. They can also help you out with board control, finding spells, etc.

Alexstrasza for example can be used to push face once you get a big board or heal yourself up in case of emergency. She can also be taunted on the same turn with Titanic Lackey or evolved with Witchy Lackey. Cobalt Spellkin is here to keep your hand filled mid-game. It also pulls you Dragon's Hoard on a regular basis.

This is really the coolest card of this deck, enabling many magical non-rogue effects if you're lucky :) Sometimes you get 3-4 in total with additions from Cobalt Spellkin for even more value.

You got an insane amount of choice, but I usually try to stick to dragons for synergy or pick one of these categories, depending on matchup. Just keep in mind that perhaps 1/6 or so are dragons, 2/6 value and 3/6 situational. To give you an idea of the potential:

Tempo/buff: Stargazer Luna, Princess Talanji (got more free minions clogging your hand?), Cenarius, Gonk, the Raptor (with a weapon equipped you can get immediate value), Houndmaster Shaw, Vereesa Windrunner (gives you a weapon and works great with burn spells like Sinister Strike), Dragonbane (really nice if he sticks or if you can combo him on turn 7 for removal or face dmg), The Glass Knight.

Very late game/singleton deck requirement: Dinotamer Brann, Sir Finley of the Sands, Reno the relicolgist, Elise the Enlightened (can be used to create nice burst combo if you have like Vereesa Windrunner's weapon and a bunch of Sinister Strikes late game. Very, very rare, but extremely fun situation :)).

Special mentions, since they can impact the game in a unique/OP way:

Valdris Felgorge is an amazing tempo card that can make your giants cost 0 mana, once you hit 7 mana and have less than 6 cards, but you hit fatigue real fast. Sometimes you can compensate this with a Togwaggle's Scheme from Cobalt Spellkin.

Dark Pharaoh Tekahn (amazing when you're Galakrond and can pump out a 4/4 lackey every turn), becomes very hard to deal with every turn.

Dragonrider Talritha this can quickly get out of hand if you also happen to have gotten a Necrium Vial from Firetree Witchdoctor. Otherwise she's just a regular value card.

Zilliax is replaceable by any heal, taunt, removal or a dragon like Evasive Wyrm or Dragonmaw Scorcher, depending on what you see. You could also drop 1 Shield of Galakrond for one of those cheap dragons, since it's not crucial to get Galakrond to 4 draws.

Alexstrasza is a card I wouldn't replace, since she can be used both offensive and defensive, but if you don't have her, just put in one of the aforementioned dragons, perhaps de Evasive Drakonid would be the best defensive option.

Waxadred seems like a nice inclusion and anti-fatigue card, but sadly I don't have him. Could drop a Shield of Galakrond for him.

I've been considering putting in Heistbaron Togwaggle (though he would also merit including EVIL Miscreant and more Galakrond cards), instead of a Khartut Defender. Would be better against control decks perhaps, since it can give a lot of tempo.

Flick Skyshiv can be amazing, but the 6-slot is already very occupied. If you're seeing less aggro and more control, maybe you can drop a Khartut Defender for him.