My name is Zananananan (https://twitter.com/Zanananan), a competitive player for SFD-Gaming (http://www.sfd-gaming.com/). You can also follow me on Twitch for High Level Gameplay (https://www.twitch.tv/zanananan), I'll start streaming soon. I just made Twitter a few hours ago, I'll also be more active there in the future.

I offer coachings for 20,00 €/hour. If you are interested, please leave me a message on Hearthpwn.

I'm Florian 'Zananananan' M. and I'm a German Hearthstone player. I've been playing Hearthstone for almost 2 years now. During my early days I was a huge fan of Zoo. I've been playing tons of Zoo on ladder and in tournaments and it's been doing very well for me. This deck is probably easy to learn but I believe that it is one of the hardest decks to play perfectly in the game.

I can already see the comments "Ohh just a boring Zoo, nothing new". I was the guy who built a similar deck to this immediately after Malchezaar's Imp came out, I hit Legend on the second day of the season with it. This is just an updated version adapted to the current meta. 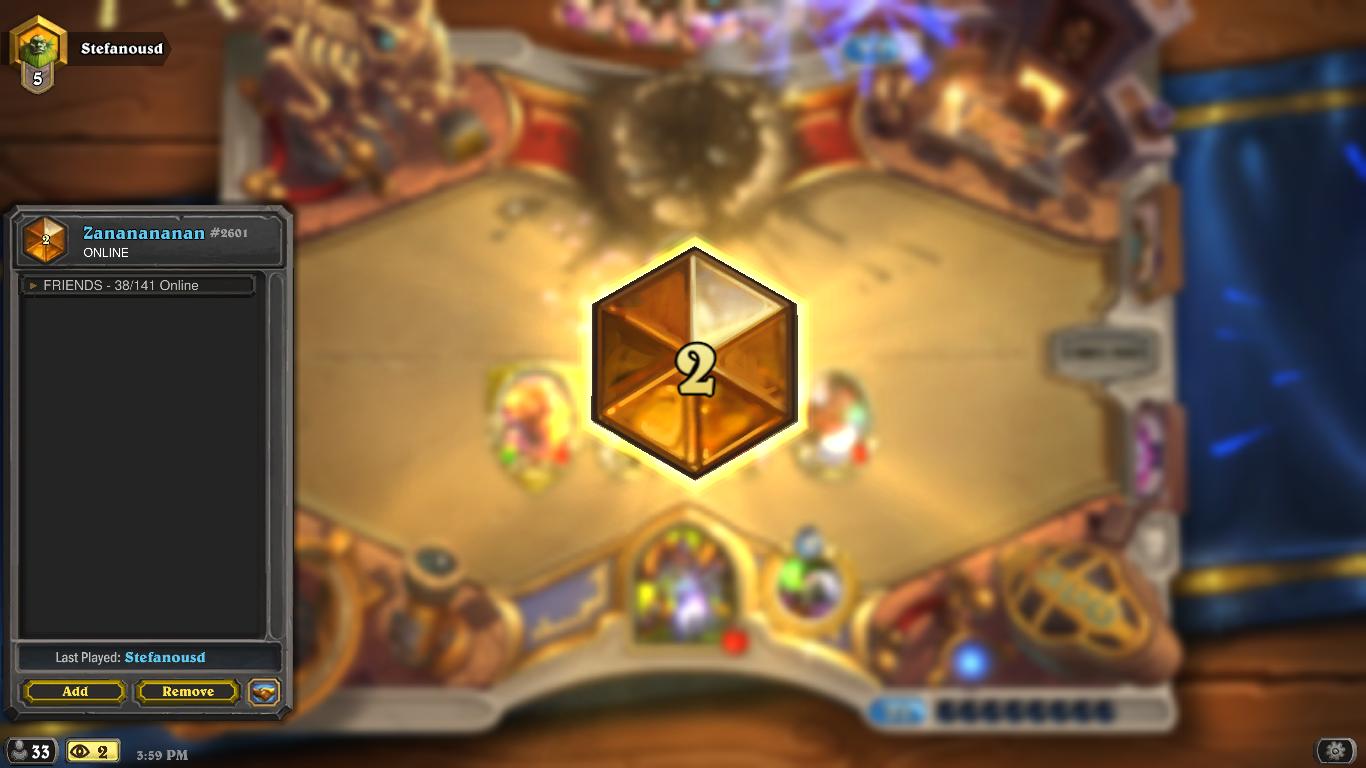 Classic Zoolock is a strategy that revolves around taking the board early, using minions and buffs to trade favorably with higher-value minions. It also relies on high-impact/swing turns (such as a free Silverware Golem or extra card draw from Malchezaar's Imp).

The key is to realize when you have to go all in and when you can afford to play around AOE.

Most of the time it doesn't matter, but it can still win or lose you some games. You always want to maximize the efficiency of Dire Wolf Alpha.

favored - Darkshire Councilman is fine if you have a 1 drop. Don't keep Voidwalker if you are going first. I keep it when I'm going second because they might play Living Roots on turn 1.

favored - Keep Imp Gang Boss if you a 1 drop. I don't like playing Voidwalker on turn 1 if they have the coin. You still have to play it if you don't have something else. They can coin out Huge Toad. Keep Dire Wolf Alpha if you have Possessed Villager. Keep Houndmaster and Unleash the Hounds in mind.

even - Imp Gang Boss is a good keep if you have a 1 drop. Explosive Trap is the most annoying one. Sometimes you can wait until you get Defender of Argus to get your minions above 2 health. You can play around Snipe by playingPossessed Villager first. Unleash the Hounds in mind.

favored - Keep Imp Gang Boss with a 1 drop, it's good against the Flamewaker. You don't have to play around Flamestrike, most lists aren't running it.

heavily unfavored - Try to find an explosive start. You have to go all in on him having no AOE. You tech Crazed Alchemist, you can kill Doomsayer with it.

even - Play a bit around Consecration. Darkshire Councilman again if you have 1 drop. Be careful about Doomsayer.

even - Darkshire Councilman is good but it's better to bait for Shadow Word: Pain before playing it. Keep Excavated Evil in mind.

even - Keep Darkshire Councilman or Imp Gang Boss if you have a 1 drop. Avoid playing a 2 health minion on turn 2 if he has the coin (SI:7 Agent).

slightly unfavored - Imp Gang Boss or Darkshire Councilman if you have a 1 drop. Beware Maelstrom Portal and Lightning Storm. Soulfire is strong against his Totem Golem or Azure Drake.

even - Imp Gang Boss is insane in this matchup. Keep Dire Wolf Alpha if you have Possessed Villager, you can kill Flame Imp or Dark Peddler. You always want to clear his board, he can't use Abusive Sergeant, Power Overwhelming or Defender of Argus this way.

slightly favored - Keep Darkshire Councilman. Don't play around AOE if you can't afford it, they only have 1 Demonwrath and 1 Hellfire for early game.

even - I don't like Voidwalker or Malchezaar's Imp on turn 1  because of Alexstrasza's Champion. Soulfire is good against Frothing Berserker, Fierce Monkey and Blackwing Corruptor.

slightly favored - Imp Gang Boss is awesome if you have a 1 drop. Defender of Argus is key in mid game.

Why aren't you running other discard cards like Succubus or Tiny Knight of Evil?

I wanted to make the deck as consistent as possible.

I don't think you need it. Soulfire is good enough.

Is Abusive Sergeant good enough after the nerf?

Yes, you can still trade favorable with it. But you shouldn't play him for tempo anymore.

The idea of came from Thijs, he played it on BlizzCon. Demonfire is just a great card when you are behind on board. You can kill something like a Sorcerer's Apprentice behind Mirror Image. It's also insane if you can buff a Malchezaar's Imp or Imp Gang Boss with it.

I went back to my old version which I released immediately after Karazhan came out with 2x Dire Wolf Alpha. It has been performing just a little bit better for me. But Demonfire is still a playable.