Hi, I'm Nam Ogel, self-proclaimed deck architect who is always looking to develop fun and creative decks that are also competitive on the ranked ladder.

Today I bring you my new deck, Minions Overwhelming!

One of my favorite decks to play in the pre-Standard format was aggressive Egg Token Druid decks, like those popularized by J4CKIECHAN. With the introduction of the Standard format, we lost the card draw power of Jeeves, and the deck-type appeared to be dead....until today!

This deck is purely focused on quickly building an overwhelming board that your opponent can't deal with, drawing enough cards to keep the pressure going, and finishing your opponent with Savage Roar.

*Disclaimer = The success of this deck is meta-dependent. This deck can be hard-countered by decks with lots of board clears or lots of taunt minions. But right now few of those types of decks are being played, and decks without taunts and board clears just get crushed!

Innervate = A key card to out-tempo your opponent early

Sir Finley Mrrgglton = first priority is the warlock hero power, second is a tie between Paladin and Shaman (to help build your board), and third is Hunter (if you are close to finishing your opponent)

Stonetusk Boar = a cheap charge minion to give you extra burst with your Savage Roar turn, but is also a beast to use with Mark of Y'Shaarj.

Soul of the Forest = one of your few sources of board clear insurance. I tried including more than one copy, but that created too many clunky hand situations. This card is a great value if you have at least 3 minions on the board, and if you can use it with 4+ minions, it is almost always gg!

Cult Master = While he can be an excellent source of card draw, I found him to be too situational, and often you couldn't afford to sacrifice your minions just to draw more cards.

Dragon Egg = we don't have the activators for him in this deck, like Abusive Sergeant or Mark of the Wild, so he just becomes a minion that your opponent ignores.

Defender of Argus = You will almost never be outpaced for aggressive tempo with this deck, so there is no need for taunts. He is just too expensive and situational for our fast deck-cycling strategy.

Addled Grizzly = Now you would think, if there was ever a deck where this card would fit, it would be something that looked like this. I tried him, but the card is just too slow and under-powered.

The ideal mulligan isn't as simple as filling out your mana curve. A good way to think about it is that you want to throw back cards that are useful in top-deck situations, like charge minions and cards that will help you draw more cards.

First priority = Innervate = Always keep this, as it is the best way to guarantee that you get board control in the first few turns, and it is often a useless card to top deck in the late game.

keep Mounted Raptor if you have your starting turns covered.

I welcome feedback, and don't forget to up-vote if you like the deck!

Druid = Favored matchup. If it is a Yogg or Maly Druid that gets lucky enough to draw all of its cheap removal spells early, then you might be in trouble. Otherwise, Druid just does not have the cheap board clears to deal with multiple minions with more than 1 health, and big taunts like Ancient of War aren’t being played right now.

Hunter = Slightly favored matchup. Make efficient trades when you can. Try to avoid leaving a high health Houndmaster target on your opponent’s board.

Mage = Unfavored matchup. A tempo mage’s main defense against this deck is Flamewaker. Target and get rid of any Flamewakers immediately, or it will easily dismantle your board.

Paladin = I honestly can’t speak much to Paladin matchups, as Paladins are so rare on the ranked ladder right now.

Priest = I have beaten Priests, but they are by far your worst matchup. The only way to play Priest competitively on ladder now is with 4+ board clears, so I would recommend keeping Soul of the Forest to play on turn 4. Lucky for us, everyone knows that Priest is currently the worst class, so you see very few of them.

Rogue = Favored matchup. Rogue’s removal spells typically can’t keep up with the growth of your board, and most don’t play board clears or taunts. If you can establish a board early, the game should be yours.

Shaman = Slightly unfavored matchup. Shaman has some of the best low-cost board clears right now with Maelstrom Portal and Lightning Storm. Plus, every Shaman runs Thing from Below, and many run Feral Spirit. However, this matchup is far from an auto-loss, as Shamans typically play around your deck very poorly. They will not keep board clears in their mulligan against Druid, and they will ignore your small early turn minions.

Warlock = Even matchup. Zoo decks don’t run board clears, but they can come close to keeping up with you on the board. Make favorable trades when you can.

Warrior = Worst Warrior matchup is the new Fierce Monkey and The Curator version of Dragon Warrior. Otherwise, the matchup should be in your favor, as Ravaging Ghoul and Brawl typically aren’t enough to stop you. If you already have board advantage with 4 or 5 minions, hold back on throwing down more to limit their value from Brawl. 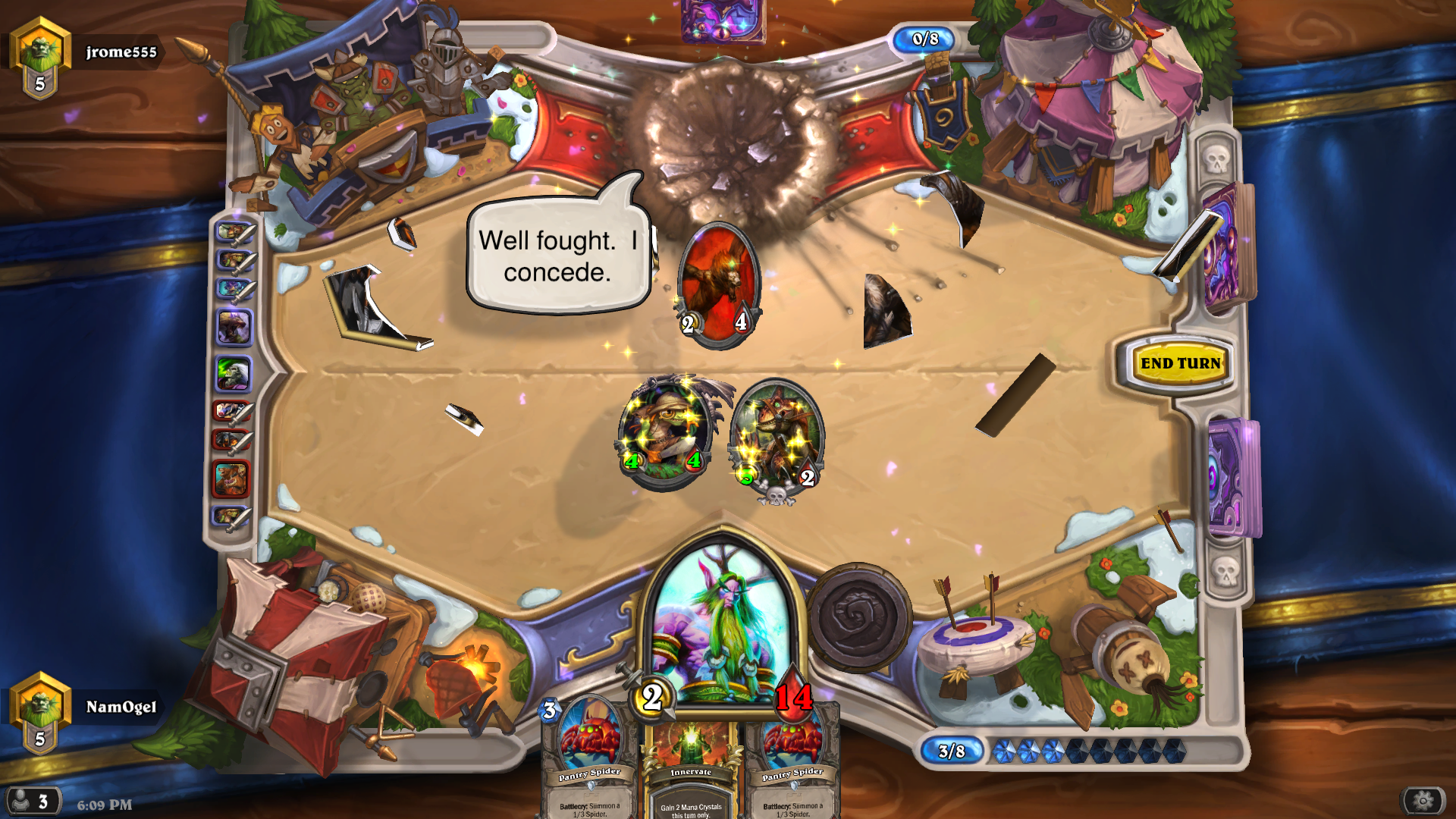 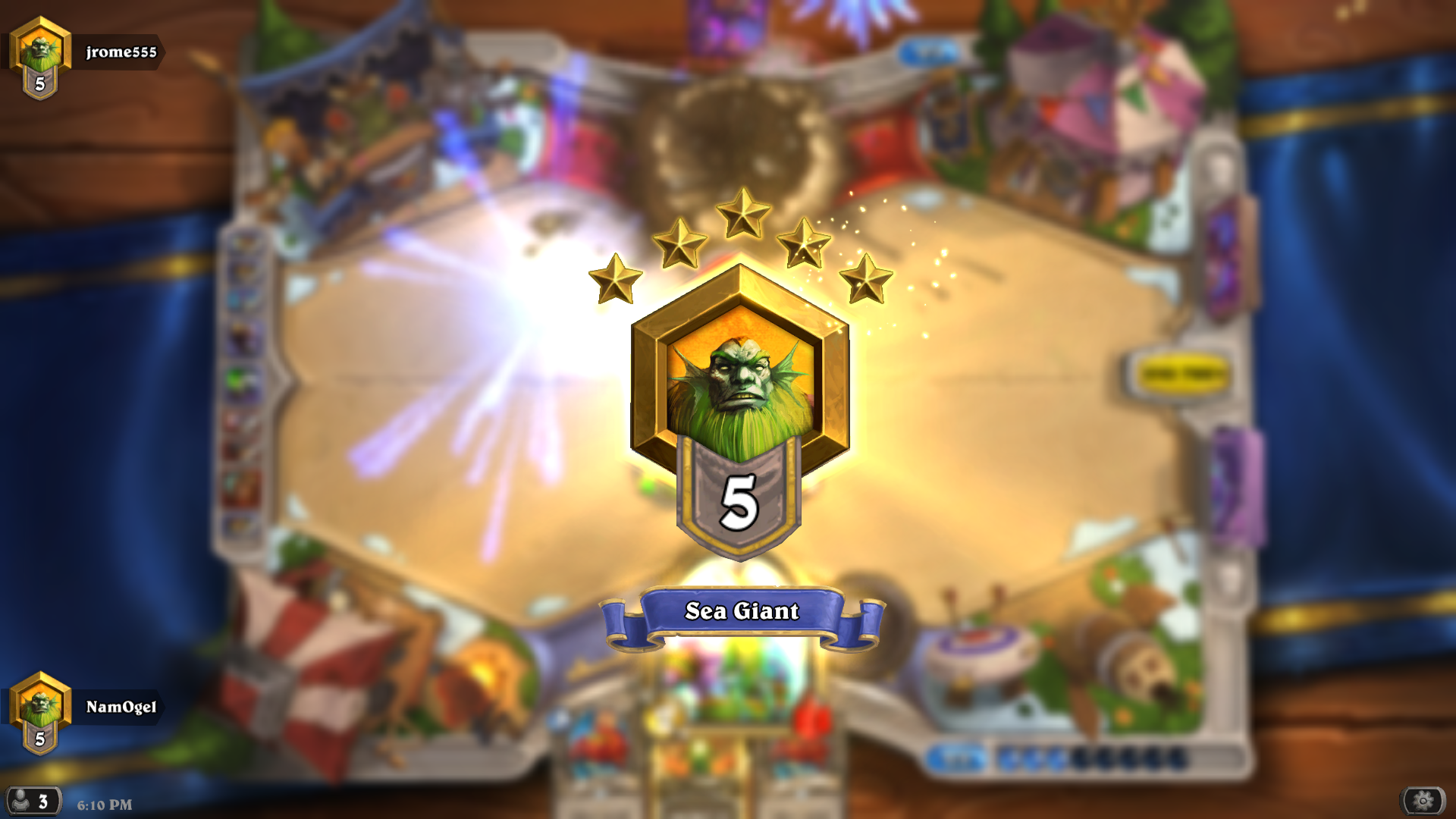