Hi!
boltzmann a.k.a Bl4ckGh0st here with a refined archetype of an older deck.
After I got tired of the meta decks these days, I came up with an idea. There were sucessful lists of Big Shaman in Asia but they ran too much of useless cards. Also some list run Torrent which is really bad in my opinion, and Walking Fountain just worked better. In addition to that, double Vivid Spores is often really dead.

I present to you this beautie.

MAY: I went 28-6 to Legend rank from high Platinum (now 34-8 in legend), decktracker is broken on my laptop and I played some matches on my mobile, sorry.

JUNE SEASON UPDATE: Deck still kinda OP, tried different variations, I run Lich King instead of the weapon, since I need more value in my matchups. Deck still works. If you have trouble beating Demon Hunters, just add Lightning Storm. People are complaining about Muckmorphers but I think the card is really good. Tried a list without it and it kinda felt worse into every matchup, since you actually lose without some value on your board.
I also tried Windfury shenanigans and that was pretty fun. You don't even need it but I could beat Raza Priest with it. Now at Diamond 3, I have played chill for 2 hours, not even tryharding with still overwhelming WR.

UPDATE: I have been having a serious success with the deck. I run Sylvanas Windrunner, The Lich King and Lightning Storm, which really stops the aggro. I removed The Fist of Ra-den but definitely was a cool card here.

UPDATE 2: Hit legend again and played through dumpster legend with 79% WR Sylvanas felt too weak against aggro. I actually kept queuing into many mirrors, so I added Hex. If you face aggro exclusively, you might want to add only 1 Torrent (two are really not good, as I said). As some lists suggest 2x Vivid Spores, you NEVER run the card EVER. It is so bad. 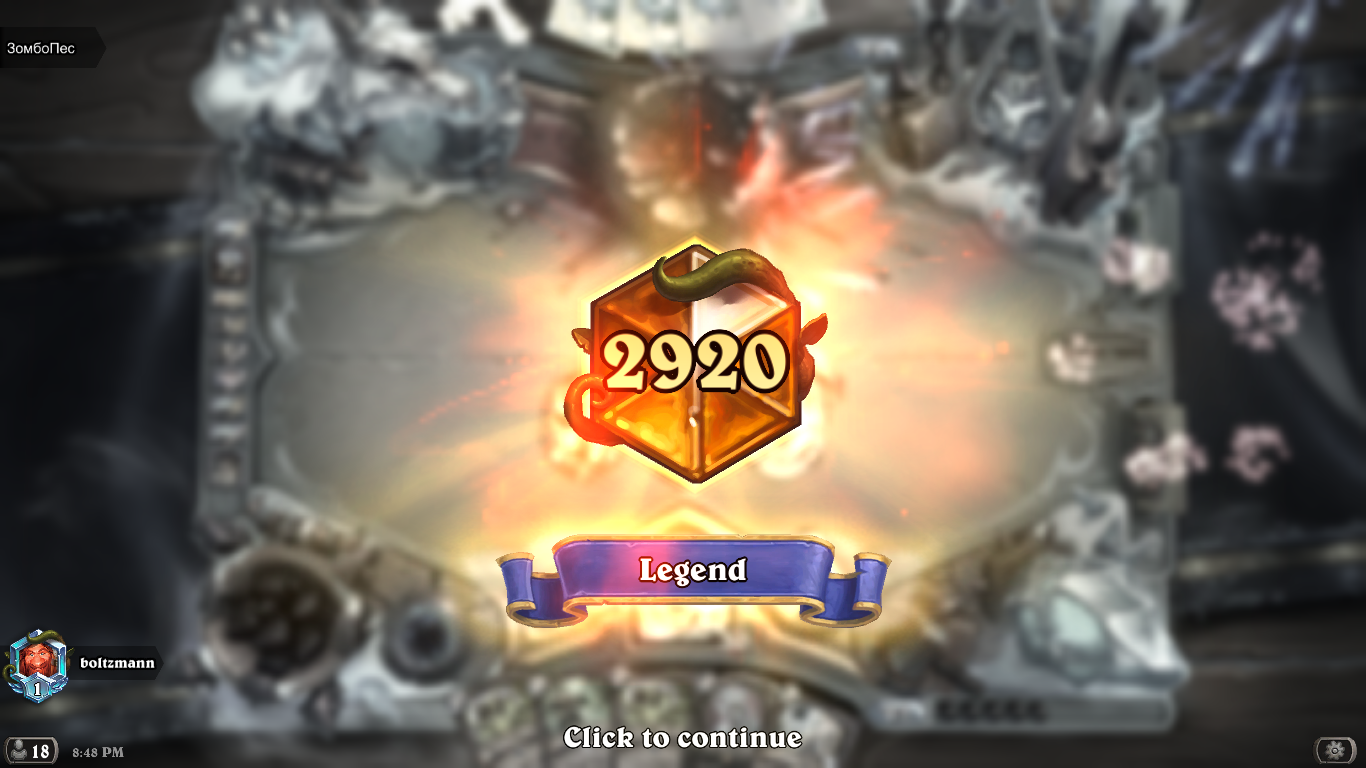 Basically you play a control deck with cheat cards - Ancestor's Call, Muckmorpher, Eureka!. You preserve deathrattles and activate them multiple times with Reincarnate, then you have the board, go face and win :)

This deck is good into aggro, you just need a good amount of healing. I actually won against every single Secret Mage.

Also the deck is really good against Quest Mage.

Control is a bit harder but when you bait out the clears, it works well against Jade Druid or Odd Warrior.

Video Spotlight (big thanks to Kadakk!)

Keep most of the time: Ancestor's Call (core card - kept always, AC in my text), Far Sight (cheating out your other cards + draw), Healing Rain (good stabilizator against aggros), Devolve (best against anything)

Rarely/never keep:  Ancestral Spirit (only on coin and with AC), a big minion without a good reason (knowing you will certainly cheat it on an exact turn)

You want to draw into your other cards.

Demon Hunter
Odd DH is kinda concerning, keep Lightning Storm Devolve, Hagatha's Scheme and some form of healing and you should do okay. When Hench-Clan Thug goes online, destroy it with Serpentshrine Portal asap. Force them to clear Scrapyard Colossus with the weapons. If they use silence, just use Ancestral Spirit + Reincarnate.

Regular DH is EZ, Maelstrom Portal should help you.

Druid
Met a few Jades. This is tough but if you are not hasty, you can keep up. Try to get Colossus of the Moon on the board and feed him with the Reincarnates and deathrattles. They waste their Poison Seeds and lose. Execute the Ancestor's Call combo and try to get their Kael'thas Sunstrider out of the hand.  Then Devolve or Fountain that minion.

Aggro Druid is okay. Keep any of the AoE and try to find healing. After turn 5 they lose if they don't kill you.

Hunter
Keep your AoE, you never know which Hunter deck it is. Played against one Reno Hunter and one Face Hunter.

Mage
I harvested Secret Mages with this deck so much. Keep heals and test for Counterspell often with Maelstrom Portal. They cannot remove any of your minions. Once Scrapyard Colossus gets on the board, it's game over for them.

One Quest Mage, as I can remember, generated 3 Polymorphs but I still won because of Colossus of the Moon stickyness.

For Odd Paladin keep Maelstrom Portal and other removals. This is an easy one.

Priest
Big Priest will be an interesting game for you. Always keep Devolve and don't remove anything without it. Use AC wisely not to cheat out their big minions. Good luck with this one, and make yourself a tea when playing this match. Try to neutralize their minions with Hex and Devolve them.

Raza Priest is one of the toughest matches but I beat 4 out of 6 I have met. Just don't overextend and try to Muck the Colossus and Reincarnate it. Usually is enough. Play Vivid Spores before their Shadowreaper Anduin and you should be okay. Be careful when they have played Kazakus.

Rogue
Did not play against any but I'd say keep AoE and Devolve, in case of both Odd Rogue or Deathrattle Rogue.

Mill Rogue is a problem, since you are a slow turtle, dump your cards to get handspace.

Shaman
Big mirror is always keeping Devolve with AC, try to mess with their board and use his AC to get your deathrattles/Reincarnates online asap. Also keep your Hex.

Even Shaman is a keep for Devolve and Hagatha's Scheme. Kill totems with the 3-cost spell.

Against Reno Shaman look for Far Sight and play around Hex. Usually they clear some part of the board and run out of steam. Don't underestimate Mind Control Tech.

Discolock is a bit dangerous for you, so try to heal fast and clear their board often. It's an aggro, you are favoured if you heal.

Cubelock is EZ with Devolve but really unwinnable without it, try not to be hasty and AC really carefully not to cheat out their Mal'Ganis. Plague of Flames is really a concern if you did not preserve deathrattles by Ancestral Spirit

Warrior
For Odd Warrior you should hold onto some of your minions, just to protect them from AoE. Lich King can give you some value.

Pirate Warrior is a hardest aggro match for you, don't be afraid to clear three or even two minions with Maelstrom Portal. Keep the Serpentshrine Portal for Ship's Cannons and Southsea Captain. Survive and win. This one was a bit hard for me to learn, so maybe practice a bit with a friend before laddering.

Three essentials you have to keep in mind:

Other tips
- Sometimes you don't have to go with AC or Muckmorpher on curve, better is to wait two turns and then play it with the Ancestral Spirit/Reincarnate.
- Don't be afraid to coin out an AoE, as it's more important than cheating out the minions early.
- Walking Fountain from Muckmorpher is underrated, almost always heals you for 8. So don't be sad when it happens, you want that against aggro.
- In bizare situations, Far Sight can save you. Try to play it on curve to draw a 1 mana AC, 3 mana Eureka! or a cheaper minion.

Other cards I tried

- Kel'Thuzad - does okay but it's unreliable in this meta, you always want to cheat out the Taunt, sticky or heal. Or the Y'Shaarj who summons one of those.
- Ancestral Knowledge - keeps you from getting the combo done. Most of the time you draw big minions and burn something + overload yourself.
- Witch's Brew - possibly okay as a last resort heal but you don't want to draw this with your Far Sight. You also have the Healing Rain which does on average better for 3 mana.

- Sylvanas Windrunner - Was a card in a previous version. Started to feel awkward into aggro, so I found her slot a tech slot.

- Hex - great for mirror and against Paladins
- Plague of Murlocs - good against Warlock, Big Priest etc. but messes your board, you can run it instead of one Devolve

-Healing Wave - good healing for your face, but since Muckmorpher is in the deck, think about it carefully

Elemental Destruction - great vs Discolock and Demon Hunter. Overloads you a bunch though.

Hope you'll have as much fun as I had. Comment down below for any questions about deck, card choices etc. and don't forget to upvote if you liked the deck or the guide.