A Call to Arms: The Resurgence of Aggro Paladin

No Murlocs, No Problem

Murlocs infested Paladin way back when Blizzard introduced Anyfin Can Happen to the class with the League of Explorers expansion. Since then, the creatures have been a feature of most decks, giving Tirion Fordring and Ragnaros, Lightlord a powerful first line of defense. Newer cards like Gentle Megasaur, Rockpool Hunter, and Finja, the Flying Star have compounded their dominance, inspiring the now common and competitive Murloc Paladin archetype. These cards have helped Paladin forge an identity many associate with Murlocs more than even Tirion.

Without Shielded Minibot and Muster for Battle, Murloc packages in Paladin have of late been more necessity than preference. Kobolds and Catacombs changed that with one card: Call to Arms. It is one of a few new cards that showcase the power of the Recruit mechanic. While Possessed Lackey has given Warlock a way around spending nine mana on Voidlord — an insane tempo swing and death knell for aggro decks without a Spellbreaker tech — Call to Arms works around the typical card-draw shortcomings of aggressive Paladin decks. Instead of drawing three cards over three turns and slowly mounting an attack, the card draws three minions, puts them in play, and triggers powerful Charge and knife-juggling effects. It is insanely powerful — single-handedly making Murloc-less aggro Paladin decks viable again. 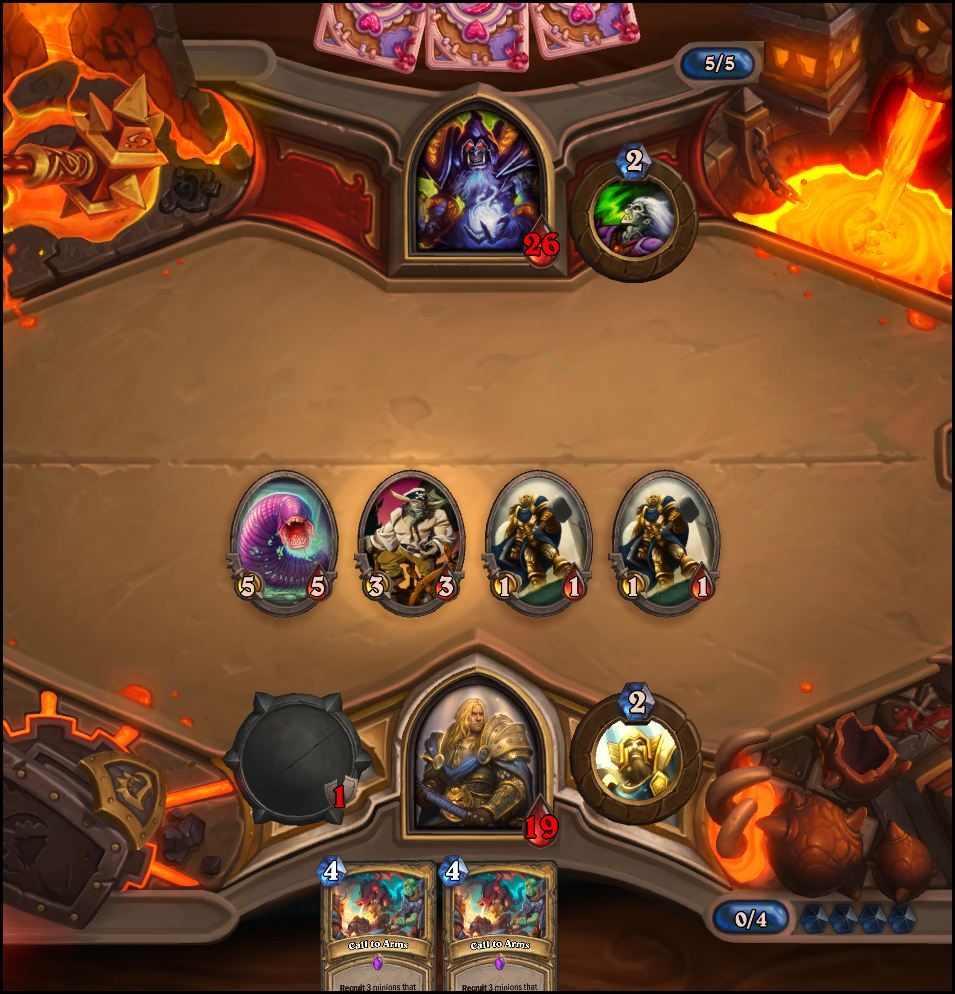 Unlike the archetypes Blizzard introduced with Kobolds and Catacombs, like Big Spell Mage and Spell Hunter, Aggro Paladin isn’t anything new. Various iterations have ebbed and flowed throughout Hearthstone history, but without reliable card draw mechanics — two copies of Divine Favor aren't exactly consistent — the archetype hasn’t been able to compete. This month, however, pro players Control and Cocosasa achieved top legend ranks in both the Wild and Standard formats with Aggro Paladin lists.

Put this Apple on their Head!

The strategy is straightforward — with a few things to keep in mind to optimize performance, of course. In general, we want to dominate the board early with Lost in the Jungle, Righteous Protector, and the pirates; use our weapons to maintain control; and use Call to Arms to either snowball our lead or refill after a board clear. Optimal play requires careful consideration of many things. The odds of recruiting Southsea Deckhand or Knife Juggler with Call to Arms, trading with Knife Juggler on board before summoning minions, going face instead of trading to set up lethal — all are important to ponder when choosing a line of play. The deck is powerful enough to steal wins without considering these things, but thoughtful players will improve their winrate and their rank if they do. Mulligan for Lost in the Jungle and a weapon always; consider keeping Call to Arms with The Coin.

Control and Cocosasa’s lists have proven powerful, but Drygulch Jailor has been a controversial inclusion. On one hand, in matches that go late, it can enable powerful swing turns with one-mana Silver Hand Recruits and Sunkeeper Tarim. It also provides tokens to trigger Knife Juggler’s effect. On the other, played on curve from the hand it’s way slower than we want, and with the right timing it can make Divine Favor much worse — an opinion Control expressed on Twitch. If you agree, Corridor Creeper makes a perfectly fine substitution.

The meta is currently overrun with minions begging to be silenced, so Spellbreaker might not be a bad tech choice if you find yourself being halted again and again by Possessed Lackey and Voidlord. Spellbreaker can also get your minions past Tar Creeper, unfreeze your biggest minion to apply surprise damage, and against Dragon Priest the silence effect can enable amazing trades with Twilight Drake. Seems good to us. But the potential for value will always depend on what sort of opponents you happen to frequently match. Take note and adjust accordingly.

As the meta continues to shift, Aggro Paladin seems to be digging in its heels. It’s worth noting that just after the expansion dropped, a more midrange-geared Silver Hand Recruit Paladin found success with token synergies: for example Level Up! with the hero power, Lost in the Jungle, and Vinecleaver. But Aggro Paladin pushes lethal damage more aggressively and so appeals to players racing against a turn-six Voidlord or Dragonfire Potion. The midrange variant still deserves an honorable mention in case things change. Until then, Call to Arms and Val'anyr have asserted the Aggro Paladin archetype into the top tier of both the Standard and Wild ladders.