Hi, it's me again :) it's not normal if I don't climb legend with a deck that's a bit different from the meta. But this deck isn't just DIFFERENT, it's EXTREMELY GOOD. The potential for N'zoth to break the meta is as great as when Even Shaman when I first discovered it. The deck might be less good when people start figuring out how to play against it though, so beware of that. 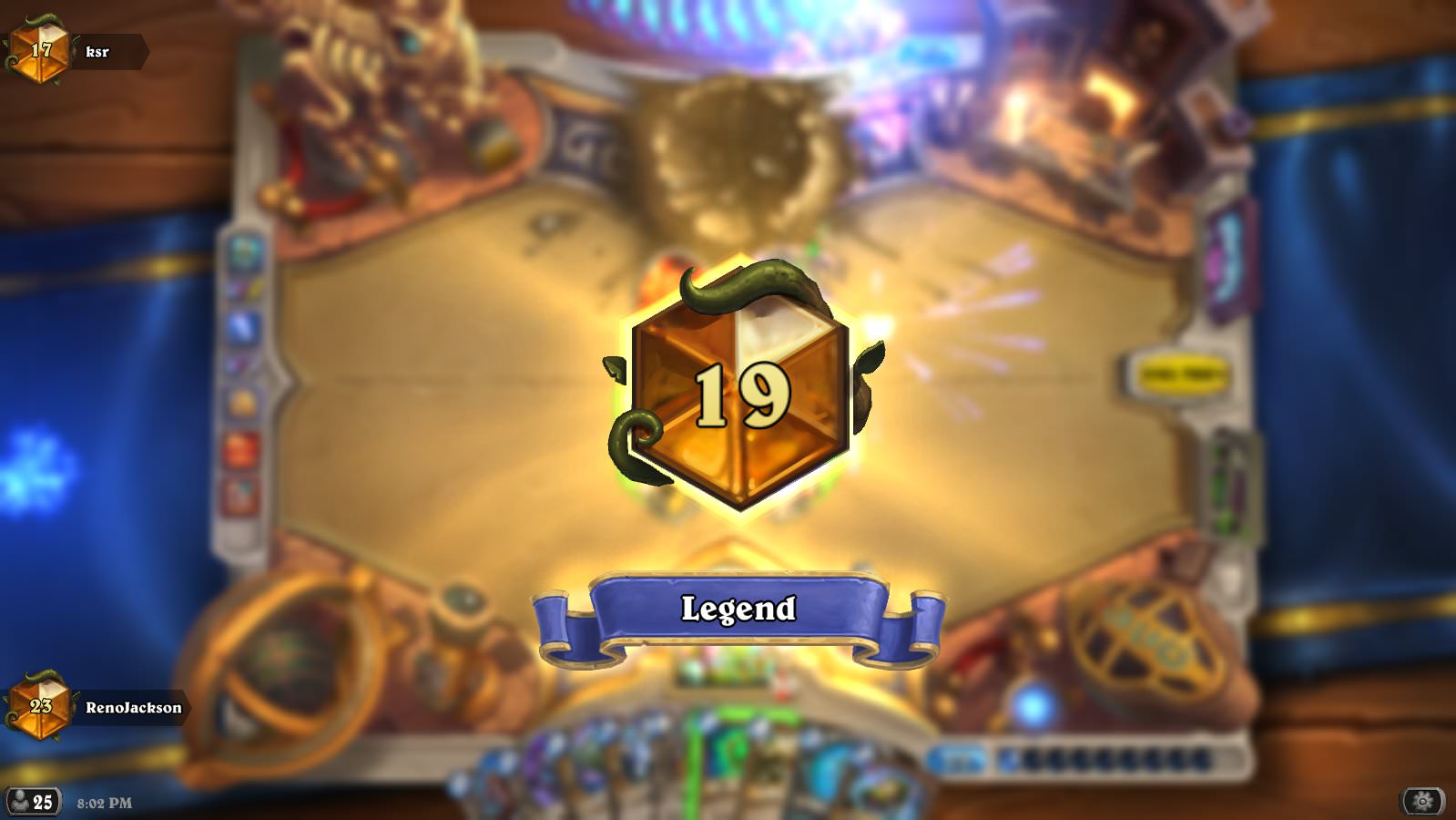 What is N'zoth Druid?

N'zoth Druid is as close to a Grindy Control deck that it can get. No Druid combo shenanigans, just pure, obnoxious, nearly unlimited value from N'zoth, Hadronox, Malorne, Lich King, Floop (as your second N'zoth or Hadronox) and Baleful (as your third N'zoth, Hadronox or your second Malorne). Protect yourself early game with taunts, stalls and removals before dropping the near unbeatable late game bombs. This deck is undoubtedly the strongest late game deck, value surpassing the most greedy of Big Priest if you play it right, while it's early game is as solid as any other slow Druid out there. It has enough refills to keep Kingsbane Rogue busy, and enough Deathlords to snatch wins off of combo decks.

If the deck is that strong, how could it go undetected for so long?

Because it wasn't this strong before. What put this deck over the top is, of course, Juicy Psychmelon. Like a substance that glues everything together, it gave the deck incredible consistency in that you always guarantee to have a N'zoth or Hadronox down as soon as turn 9 if you want to.

Malorne: The best 7 drop to be drawn from Juicy Psychmelon, the best 7 drop to be slotted in this deck. This card single-handedly win every single Control matchup if it's not Transformed (Silence usually doesn't work because you'll get him back from N'zoth). Otherwise a good offensive force. I have this card won me games where I got my Floop and N'zoth ratted, which leaves me with almost no value left other than this and a single Hadronox proc. If you don't have him, swap for Chillmaw or Bog Creeper.

Poison Seeds: One card that's really good in conjunction with other stall tools in the deck. This card shuts down big drops from Renolock, Evenlock, Even Shaman and Big Priest, and fills their board with crap 2/2s that can't get through Spreading Plague or to be cleared immediately or next turn with Starfall.

Starfall: Better than Swipe in this deck because it clears a Seeds board very cleanly. Also good vs Paladin and Shaman boards, and the 5 damage option comes in handy in a clutch (kill a medium threat, kill your own Deathlord, Sylvanas).

Deathlord: Another crazy good fatigue card. You'll get many many of Deathlords back, them alone pull you 4 to 5 cards ahead on fatigue. Also a good early taunt and a good combo disruptor.

Flobbidinous Floop: The absolute value machine. Need an extra Hadronox? Got 'em. An extra N'zoth? No problem. A 4 mana Sylvanas, a 4 mana Deathlord that can be killed by your own Spellstone? This card is wayyyy too good, it's almost in the same league as Juicy Psychmelon.

Lich King: Your taunt pool from Hadronox usually suck without this absolute unit. A huge bulky taunt with occasional value is never bad.

Spreading Plague: Isn't it bad with Hadronox, one might ask. Yes and no. It makes your Hadronox a bit weaker overall, but it doesn't matter too much when you can revive like 3 Hadronoxes. It's always a sticky board to buff Branching Paths on anyway. Against Control, you try your best to not play it, and it's too good against Aggro to not include.

Branching Paths: It's armour, it's draw, it's burst. Need I say more?

Baleful Banker: Incredible value card when played with Floop. Play a Hadronox from Floop and shuffle it back, play a N'zoth and shuffle it back. But normally I just shuffle Malorne back in Control matchups, that's more than enough. If you want to go for the ultimate greed play, Baleful a N'zoth or something, then transform your Floop into Baleful to Baleful that Baleful. Much easier to use than Carnivorous Cube.

Nourish: You fill your curve with taunts, not ramp. Ramp too fast and you don't have enough taunts to pull back to life from N'zoth/Hadronox. The reason Wild Growth is played in this deck is because we usually skip turn 2 anyway, but we rarely skip turn 5.

Mulch: Good as an activator for Sylvanas and Hadronox if your Naturalize get Geisted. Some sort of a meta call really.

Loatheb: Good card to seal the game after you made a huge sticky board, but limited application in other situations.

Carnivorous Cube: A clunky Baleful Banker that eats up a N'zoth revive spot and doesn't help with fatigue count.

Dirty Rat: A more proactive Deathlord that deals with combo pieces on hand well. If you see many combo, find a spot for it.

Don't be afraid of a full hand while dropping Lich King on curve. Sustaining your curve is much better than worrying about a burnt card.

Against some decks you can just drop a Hadronox turn 9 without worrying too much, for example, against Druids.

Sometimes it's wise to drop a Deathlord into your opponents 8/8 if you have removals like Seeds or stall like Plague to deal with whatever drops from it afterwards. You'll save 8 health that way.

Maximize value. You want to play Hadronox first, Naturalize it, then bring it back with N'zoth. The control deck will have to clear the board twice, that's crazy hard. But then they will have to clear it for the 4th and 5th time, with the second N'zoth from Floop. Your alternate gameplan in case N'zoth gets ratted is to Floop Hadronox, and/or Baleful Banker Malorne. You will get many, many Malornes from N'zoth that it's impossible to lose the late game. And if you're afraid of burst, just tank up whenever you can. Keep in mind lethal opportunities with Branching Path.

You have the same armour gain, the same removals, but the one thing you have that they don't is Deathlord. Don't be afraid to Naturalize, Poison Seeds or Spellstone your own Deathlord if you have answer to whatever pops out. Play your big dudes like Hadro and N'zoth early to avoid them getting stolen.

N'zoth is way better at early pressure since they drop stuffs on curve. The only way for Jade to win is to make big Jade REALLY quick and outtempo you, therefore keeping Naturalize and Seeds will help you deal with that. You will generally dominate the midgame since the jade has absolutely no way to deal with multiple big boards. You win this matchup the way Renolock usually win this.

The only way for the Reno Priest to realistically win against you is Raza on 5 into Anduin on 8. Otherwise just tank the HELL UP, while you still gonna need to contest the board to minimize their chip damage. Luckily, N'zoth Druid can do both. Keeping cards like Applebaum will help you deal with board, while you shouldn't play a Deathlord too early if not under pressure because a Pain can mean they might have a strong enough chippy board. Deathlord is good to potentially pull out a Spawn or Velen, so try playing it, killing it with Seeds or Naturalize, and kill the combo piece if it drops out.

Secret Hunter usually runs out of gas if you can shut down their early game. Jasper Spellstones deals very well with their early game cards, while putting a Deathlord and not triggering any secrets can keep them in check for turns (except if they play that Hunter's Mark Candleshot bs, but if they play that they're usually Spell Hunter, and they usually pull Barnes or nothing. If they pull Y'shaarj, you have 4 cards that can deal with it immediately). If possible, save Spellstone for Cloaked Huntress. Don't lose too much HP, and don't worry if Rexxar comes into play. Druids were never that scared of Rexxar. Even if he had a poisonous board clear, just kill it and refill your board. You have many tries.

Rogues hate Taunts. They either have to go tall to smash the taunt (harder to deal with but harder for them to do) or go wide to wait for buffs (easier to deal with). Save your Spellstones for Hench-Clan Thug, and be patience with your Spreading Plagues. Spreading into a board full of 3/3s won't do any good, you'd rather take some extra damage, Poison Seeds them or something, or bait out Fungalmancer before Seeding. Take some early damage, stall with Deathlords so they drop out more small stuffs, then Spreading Plague and star armouring back up. Eventually you will get to your big walls of taunts and unlike Shamans, Rogues have absolutely no way to get through them.

The gameplan is the same as Odd Rogue, but there are key considerations. If they have like 5 1/1s on turn 4 and you are at reasonable health, just Seeds them into 2/2s. They can't buff them up and will likely have to fill their board into a Plague, which will buy you another 2 turns, because again, the Seeds won't die and they don't have many cards to buff them up. Also it potentially gives you the chance to Starfall his whole board away while still keeping some of your Scarabs up, which would probably mean game over by then.

The gameplan is the same, except that Mech Hunter can make a big minion really quickly so keeping Naturalize will help with that.

If you can survive through turn 7, you will generally win. That means no Barnes turn 4 into BS (you can still deal with a Barnes turn 4 though), no Ragnaros Shadow Essence turn 6 (or Y'shaarj), and it will be smooth sailing. Obsidian Statues or even Lich King aren't all that threatening, and the Priest has no way to clear multiple Hadronox board without losing a ton of resource (Doom Pact) or giving us a ton of resource (Psychic Scream). We eventually win from attrition. Yes! Attrition against a Big Priest! This deck has some crazy value. A value Poison Seeds will stall the game for pretty long, and don't be afraid of burning one Naturalize to burn his cards and gets you another turn.

Mulligan everything away for these two if you know it's Exodia Mage. You have two outs: Pulling an Antonidas/Emperor out with Deathlord, or milling them with Naturalize. If it works, it works. If it doesn't, tech in Dirty Rat.

It's winnable. Rogues can clear the board as many as 3 times (2 Vanishes, 1 Blade Flurry) and they are not that ahead in fatigue even with Lab Recruiter because of Malorne. This matchup is easier for people who don't know what they're up against because they're more likely to use Vanishes inefficiently. You need to maximize the number of boards you can make: 1 Hadronox, 1 N'zoth, another N'zoth from Floop and another one from Baleful Banker,  that is potentially 7 sticky boards. You can also pressure early with your taunts and his cycle minions can drop from Deathlords (Oracle and Minstrel). It's okay to throw away one of your Naturalize just to get rid of these Oracles, or you can keep both Naturalize until he's in fatigue, you can deal an extra 15 damage. That, plus Branching Paths on your board at anytime you can, might seal you the game.

Devolve is a HUGE problem card. It gives him the liberty to push for lethal anytime you like. But you will need to play out as if he doesn't have Devolve. Remember that he has many 7 to 8 health minions, so you might want to keep Branching Path to upgrade your Spellstone to 6 damage, then kill his board on turn 6 with Starfall on all minions and the Spellstone on the 6 health Sea Giant. Naturalize needs to be kept to deal with his big board.

Want to see how the deck works? Request me to play it on my stream!