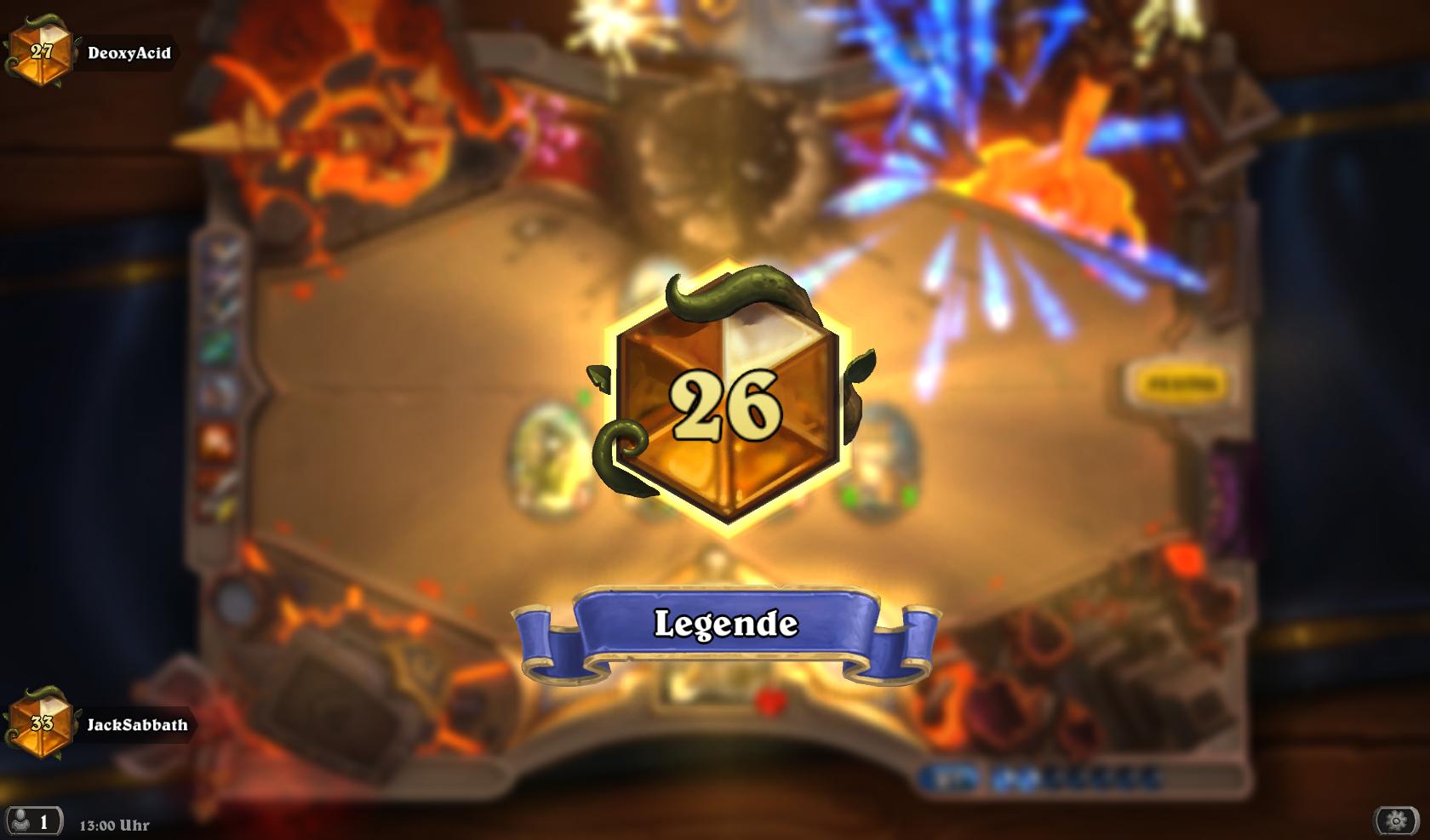 Face hunter is a good allround aggro deck that can beat any other deck in the format. The reason to play this deck over pirates is, that hunter has a hero ability that actually supports our game plan. That allows you to go for a lower mana curve without running out of action, what ultimately means that this deck is less draw dependant and more constant. Other decks loose, because they draw too many expensive cards in their opener. That almost never happens with this deck and you don't allow your opponent to have a bad draw.

Alleycat - A very solid opener that enables strong followups via [card]Dire Wolf Alpha[/card], [card]Crackling Razormaw[/card] or Glaivezooka. Controlling the board early usually means, that you can overall do more damage, because your minions can connect more often with the opponents face.

Crackling Razormaw - Very good body and an awesome effect. Usually you want to keep it in hand until you can play it with it's battlecry, which is possible in most games due to Cat Trick. But playing it on turn two is usually better than just heropowering.

Mad Scientist - Best card in the deck. He has a decent body, provides as well tempo and card advantage. It is important to know, that if your opponent uses and spell to kill his and if he draws out a Cat Trick, then the Cat Trick will immediately trigger. Try to play Mad Scientist on the turn before your opponent can AoE your board away is a nice insurrance.

Cat Trick - As said, it's main purpose is to punish your opponent for playing a sweeper. The 4/2 cat is a great followup, since you can buff it with Houndmaster and Crackling Razormaw.

Snake Trap - In most matchups you're hoping for Cat Trick from your Mad Scientist. Yet, in matchups like pirates, token druid or aggro paladin you're actually happier to get a Snake Trap, since it has a most board impact and almost always leaves you with a beast on the board, which enabled Houndmaster, which makes it the best comeback mechanic trap. The synergies with Dire Wolf Alpha are obvious.

Dire Wolf Alpha - A great support card that helps you to make better trades and and provides pretty good pressure. Dire Wolf Alpha with two1/1  kittens is a good board on turn two that doesn't get punished to badly by Potion of Madness.

Glaivezooka - Best weapon in the game since the War axe nerf. It provides early board control and increases the pressure. It's important to think about WHEN to play it, to control which minions gets the buff. Southsea Deckhand into Glaivezooka provides a surprisingly strong board for cheap mana. Yet, quite often you run your Patches the Pirate into an opposing minion to garantuee the buff of the Deckhand.

Golakka Crawler - Quite many aggro decks run a few pirates and Golakka Crawler is a great way to punish them for that. In pirate matchups you want to keep it until you can eat a pirate with at least 3 toughness.

Quick Shot - Usually just a board control tool, but also a good finisher. It's important, that you don't play it for no reason. If you have two spare mana on turn four, then it's most likely better to use your hero power, since you can always play Quick Shot later, while you can't use your hero power twice on later turns.

Bearshark - Great card in this priest meta, since they really struggle to remove it.. especially if you buff it.

Eaglehorn Bow - Solid weapon for controlling the board. Try to keep it's charge if you have a secret up. One of this is enough in this deck, because drawing too many weapons is terrible and Glaivezooka is better because it provides board control earlier.

Unleash the Hounds - A decent comeback mechanic or finisher. Yet, only one copy is needed because it isn't the best card in many matchups. Try to keep it in hand until you reach the maximum value out of it. In control matchups, that means that you often play it together with Leeroy Jenkins to get two extra hounds out of the deal.

Houndmaster - Most the time you get the buff, and then this card is just busted. Yet, if you want to cut a card from this card this is one candidate, because double Houndmaster is sometimes too clunky.

Leeroy Jenkins - Finisher. If you have lethal on different way, always use Leeroy for extra style points.

Cards, that didn't make it into the deck

More 1-drops minions - Usually not needed, because you don't want to draw too many of them.

Tracking - Good card, but it doesn't synergize too well with the deck, since you don't want to hit Patches the Pirate or any secret with it (that weakens your Mad Scientist. Also, you hope to play curve and the one mana that Tracking needs DOES make a difference. The chance to find a certain card that you want right now is also not too high.

Freezing Trap - Doesn't support your plan to kill the opponent. And it's easy to play around.

Explosive Trap - It's very hard to control WHEN the trap enters the field, since most the time it jumps out of your deck via Mad Scientist, meaning that you rarely get much value. Yet, it's worth it to bluff Explosive Trap. Quite often your opponent doesn't attack you out of fear and gives you more time with it.

Bear Trap/Venomstrike Trap - Just do less than Snake Trap. You don't want to play too many traps, since you want a Cat Trick from your Mad Scientist most of the time.

Ironbeak Owl/Spellbreaker - The idea is clear. But these cards are very situational and a Houndmaster usually also allows you to power through big taunts.

Haunted Creeper/Kindly Grandmother - These cards are horrible against priest, especially against Potion of Madness and don't apply much pressure on themselves. If the meta shifts, they should be included. But right now these cards rarely shine. Kindly Grandmother would most likely the better one of these two, since it applies more pressure and since the spawned minion is also a beast, which can be buffed and is therefore a better followup after a sweeper.

Patches the Pirate - Take out the other pirates and add two Fire Flys and a Fiery Bat.

Leeroy Jenkins - Either Unleash the Hounds or Spiked Hogrider or Ironbeak Owl. All of them are much weaker than Leeroy.

Cat Trick - There is no replacement unfortunately. Sorry :-/

Usually you want to keep ONE 1-drop (except for Patches) and a two drop (Mad Scientist or Glaivezooka). If you have a 1-Drops, then you can also keep Dire Wolf Alpha and Crackling Razormaw. You NEVER keep Patches, Kill Command and Quick Shot.

You also keep Bearshark and on the draw also Animal Companion. Sometimes you can kill him before he can play Reno. You should go for it. Try to play around Potion of Madness: It's fine if he uses it to kill two kittens or to deny your secret from Mad Scientist, so you can create a board that baits it. But it's backbreaking if he runs two of your 2-drops into each other.

You always keep Glaivezooka. This matchup is usually very good and hard to loose. If he plays tempo mage, then try to kill his minions before you play yours. Just running your minions into his allows him to generate tempo.

Always keep Golakka Crawler, Crackling Razormaw, Snake Trap and put Dire Wolf Alpha away. Also, keep Animal Companion, if you also have something cheaper. Against pirates, you should play as much for the board as possible. The one who wins the board wins most likely the match.

Keep Unleash the Hounds. Against Murlocs you're actually favored, but token Paladin is a difficult matchup. Try to kill his recruits before he can mass buff them. Try to push as much combat damage to his face as possible before he can play Spikeridged Steed.

Update: I actually scheduled writing the rest of this guide on saturday morning. But today I read about the mechanic changes in HS, which mean that a Cat Trick won't trigger right away, when it get's pulled out by a dying Mad Scientist. This means that this deck looses a big part of it's core mechanic and I don't consider it competitive anymore. I therefore won't write the rest of the guide, because the deck would have to be reengineered first (which I don't want to do).