Give it a try and don't be afraid to share your experience! :)

THE WEBLORD IS BACK

After TGT came out i tried to make this deck a thing again and here it is now. The weblord has become more powerful then ever in my opinion. With TGT there also came a bunch of Battlecry cards which want to be challenged. Espespially the Mysterious Challenger makes a lot of trouble to other decks. This deck has developed to a ANTI AGGRO deck with nice control lategame, so match ups have changed compared to the deck version before:

Things i get asked often:

Weblord can give you insane Tempo, as they delay the play of things like: Houndmaster, Aldor, Quartermaster, Fire Elemental, Doomguard, Void Terror, Taskmaster, Azur Drake, Twilight Drake, Owl, Abusive, Argus, Loatheb or Dr. Boom (and many more). Played on the right turns it gives you a huge advantage. And buffed up with velen's Chosen it is a big thread for the opponent and he needs to deal with it (love to bate an execute from the opponent because you're lategame is insane) EDIT: with TGT release the most threatening battlecry Mysterious Challenger became a thing. So Play weblord before turn 6 to shut him down.

ofc you have to keep in mind that your own (threw harrison because of meta changes) is also a battlecry --> as a result you have to pay attention espescially against warriors or Paladins or Rogues, when to play ( or even to sacrifice) the Weblord to get value out of Harrison. Same with Cabal

2) What are good replacements for Sneed's Old Shredder and Ysera?

You can try with Kel'Thuzad and Dr. Boom

3) What is the general mulligan?

Just go for your early game minions. Always keep against weapon classes. Against aggro try to go for Deathlord and sometimes also keep Velen's Chosen if you have an early minion to buff.

THANKS to xTony and Kristophesaurus who did these two videos to this deck:

Thanks to everyone who upvoted this: WE DID IT REDDIT... we are on the starting page of hearthpwn ! 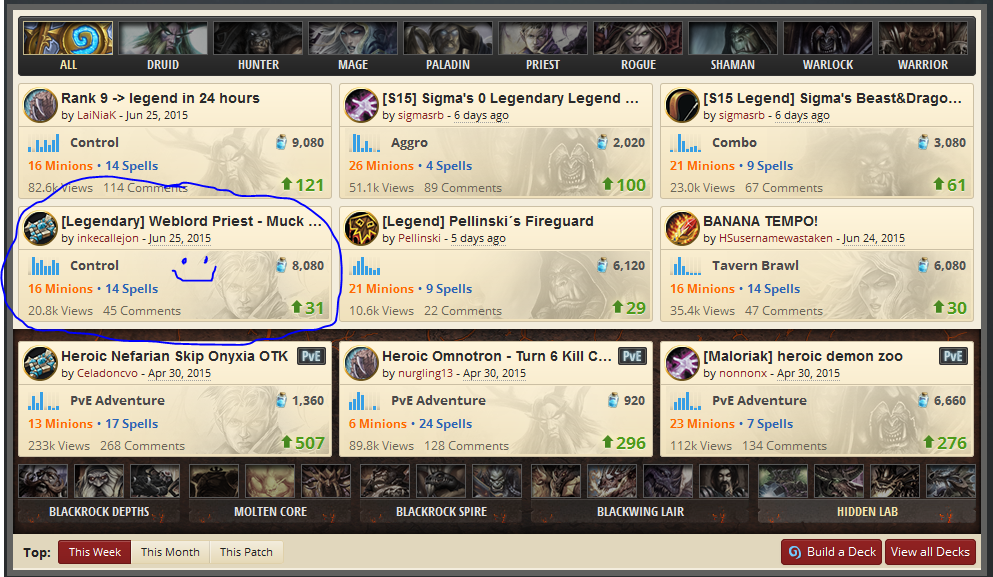