first of all thank you for the positive feedback and the comments. I'm a bit surprised that the deck has reached such a high amount of views, because I had just uploaded it in order to show it to some friends.

So a little bit about me: I'm a 22 years old student from Germany just playing the game casually. I made it to legend one time before. Normally I only play to Rank 5 and get bored very fast after that cause of the metagame. Hopefully Standard will change that.

I think you can compare the deck to an older combo Renolock so it will be played quite similar. Use your resources wisely. Prepare for playing from behind in the early and maybe midgame when your opening is really slow. Try to take over board during the midgame and recover with Reno. Then pressure your opponent and finish him off with 1 or maybe 2 C'Thuns.

When C'Thun wasn't enough you have the Jaraxxus for the lategame.

Wanted to update the deck and add a few cards from the latest adventure to it but unfortunately I think there are no cards that would fit in this deck very well. So I just updated it to the list I'm playing right now.

Small Mulligan Guide: (I'm writing a complete one when the meta stabilized a bit)

Generally go for some early game.  Always keep the Doomsayer, it can give you some tempo in the early stages of the game even against control decks. But keeping Reno/Hellfire against shaman or a cheap aoe against warlock in case of it's zoo can't be wrong. You can look up complete Mulligan guides from older Renolocks. It's almost identical in this deck.

I don't have BRM what can I do?

Replace Imp Gang Boss with Mind Control Tech or Harvest Golem and try Spreading Madness or Tentacle of N'Zoth as a replacement for Demonwrath. Emperor Thaurissan is a very good card and I recommend getting the first wing of BRM as soon as possible. In the meantime you can try The Black Knight if he's not already in your list.

Obviously you don't play him when you expect a 20/20 C'Thun on an empty board in the next round but you can use him to pressure the C'Thun decks early or as a recovery after a C'Thun when Reno was already used. In any other control matchup like N'Zoth Priest/Pala Jaraxxus works fantastic.

Why no Usher of Souls?

I played a lot with that card and I was a big defender of it, but I have to admit that it's straight up not good in this deck. The body for tempo gets removed easily and the C'Thun buffing effects is more or less unnecessary.

The list didn't feature Doomcaller for a long time and I wasn't really happy to cut it. I put him back in to give him a second chance and it turns out that he isn't as bad in many matchups as I thought before. A proactive threat in the lategame even without the double C'Thun prevented a passed turn many times. And killing your opponent with the second C'Thun just feels great. When you don't like it feel free to run a list without it.

Is it possible to cut Acidic Swamp Ooze from the deck?

Of course it is possible and it's a good cut when you don't face any weapon classes. But I highly recommend not doing this. Even when you're matched against a weapon class in only 1 out of 5 games, a destroyed Gorehowl, Doomhammer, Ashbringer or a big Rogue weapon can win you the game. The 3/2 body in the early against non-weapon classes isn't that bad either.

Recent changes: (small explanation why I made this change below)

When you're facing a lot of taunts on the ladder use The Black Knight instead of BGH:

I wouldn't recommend this change but when Doomsayer doesn't work for you pick one of the cards below:

When you feel like the deck features too many 3 drops now, I recommend this change:

Updated the decklist. Talked about the thoughts on specific cards in the FAQ. The Power Overwhelming was great with Sylvanas Windrunner and Shadowflame but it was too reactive in many cases. I put Earthen Ring Farseer back in for a small additional heal and some early game.

Just a small Highlight from one of the games: (the po was from the peddler) 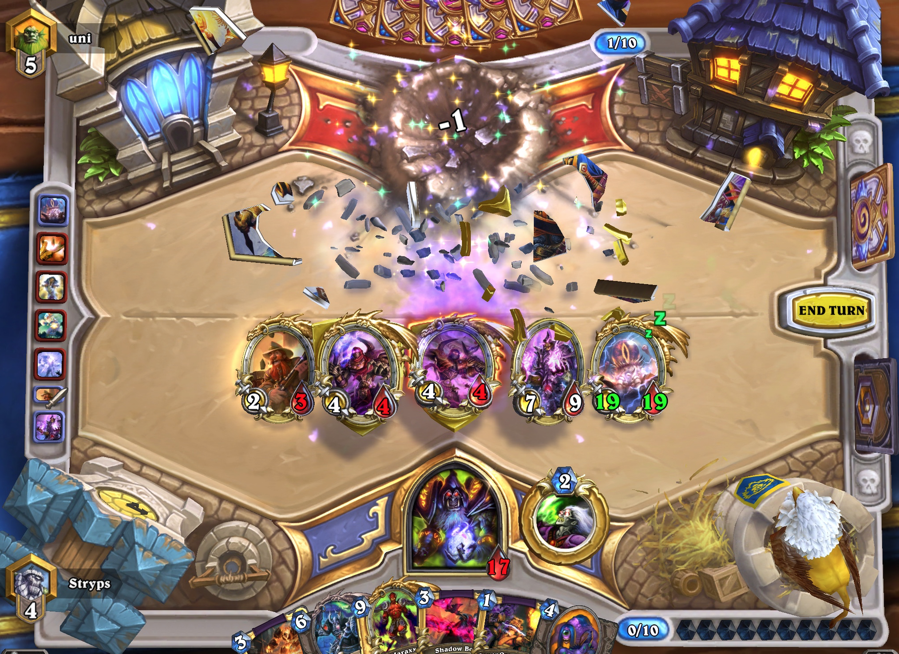