The deck is built around multiplying Dreadsteed with Baron Rivendare, using cards such as Sacrificial Pact, Mortal Coil and Hellfire on your Dreadsteeds to trigger the Deathrattle multiple times before your Baron Rivendare dies.

The deck has a lot of taunts, board clears, and healing, so it is pretty durable and can find the combo pieces reliably. It is pretty consistent and can reliably win against most currently popular decks. The games are often pretty long and go to fatigue, though.

Your objective is to stay alive and find your combo pieces:

When you have found Baron Rivendare and Dreadsteed you will usually already have multiple cards in your hand that will activate the combo, so really you're only looking for those two cards.

Tip: Don't be afraid to use your Mortal Coils offensively.

Early game you should try to slow down the game however you can using the large amount of board clears, taunts, and healing at your disposal. Use your hero power as much as you possibly can. The 40 points of healing (and the health gain from Lord Jaraxxus) will make up for the health lost and your AOE cards will deal with their board.

Once you have found Baron Rivendare and Dreadsteed you will usually already have multiple cards in your hand that will activate the combo and summon you an army of immortal Dreadsteeds to slowly whittle down your opponent. The steeds will get consistent value and win you the game as long as you don't get bursted down.

If you lose Baron Rivendare before you get your steeds on the board, you have lost your main win condition and will probably lose the game. You could play Kel'Thuzad to have a second way to multiply Dreadsteeds, but I have found that to be not necessary.

The combo will generally happen when you have about 12 cards left. After your steeds are on the board you should stop tapping if fatigue seems likely, unless you need more cards.

Sacrificial Pact is what makes this deck what it is. It makes sure you don't die immediately after you play your combo and survive long enough to get value out of your Dreadsteeds.

Since it also works on enemy minions, it gives you a significant advantage over any deck that runs demons. Killing a Doomguard, Imp Gang Boss or instantly winning the game against Lord Jaraxxus with a 0 mana spell and healing for 5 is absurd value and a great feeling.

Doomsayer  is a great card for stalling the game. It stops early game aggression from getting out of control and prevents your opponent from playing minions for a turn. After turn 3 your opponent can probably kill it if you play it without a taunt, but even then it is great at helping you make it to late game since 7 damage is quite a lot. Voidwalker+Doomsayer will clear most early boards, getting you 1 turn further into the late game, where this deck really starts to shine. This is the most important card to have against an aggro paladin as minions with divine shield are very hard to efficiently clear with this deck. 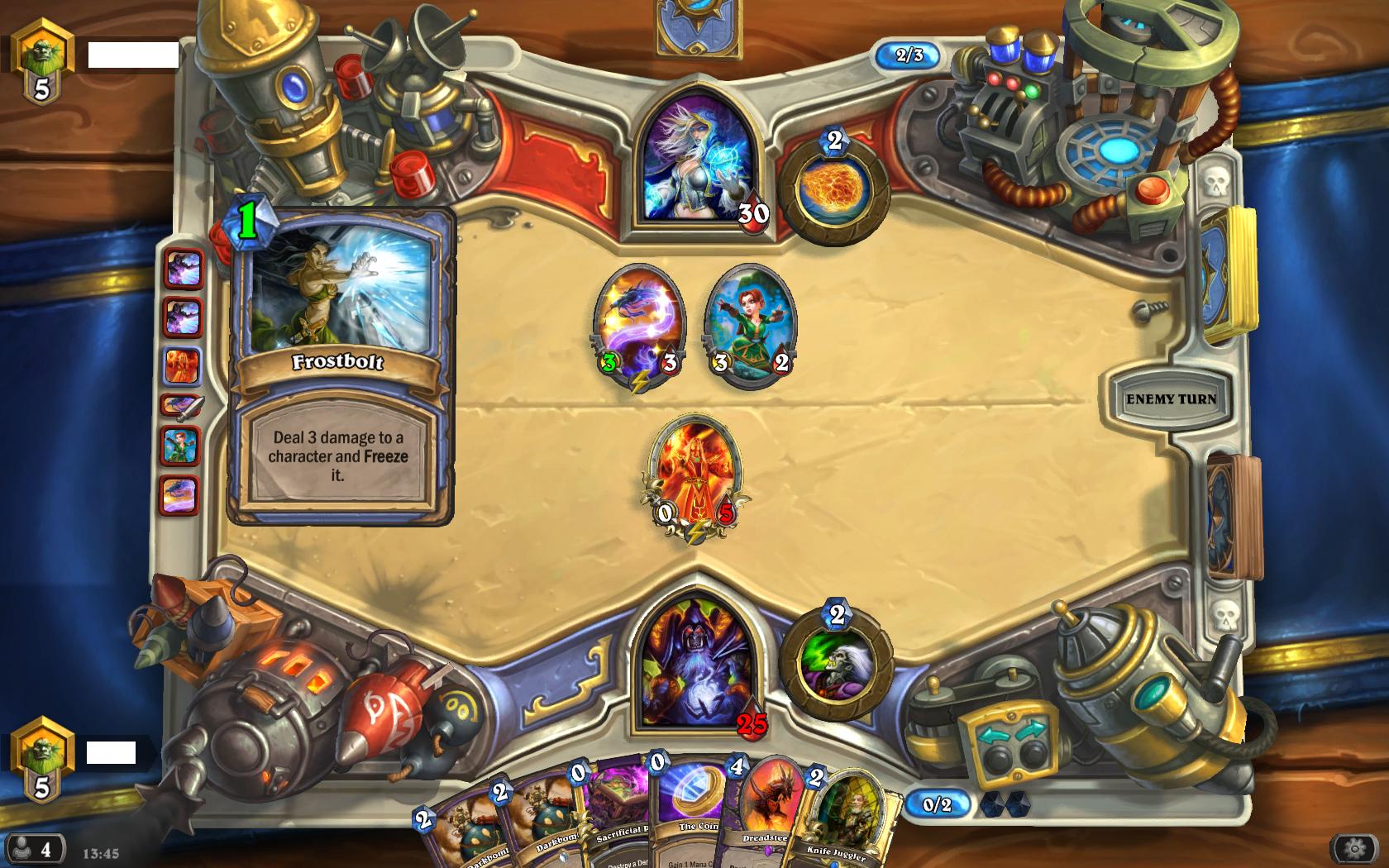 The Knife Juggler can do a lot of damage when you kill off your steeds and they respawn. After you have unleashed the first barrage of knives, your opponent will most likely want to kill it, making this card effectively have a soft taunt. Against slower control decks you should not play it on turn 2 as the knives will be more valueable than a 3/2 body. Against aggro it should be played whenever you can as you dont want to lose too much life before you can use your board clears. 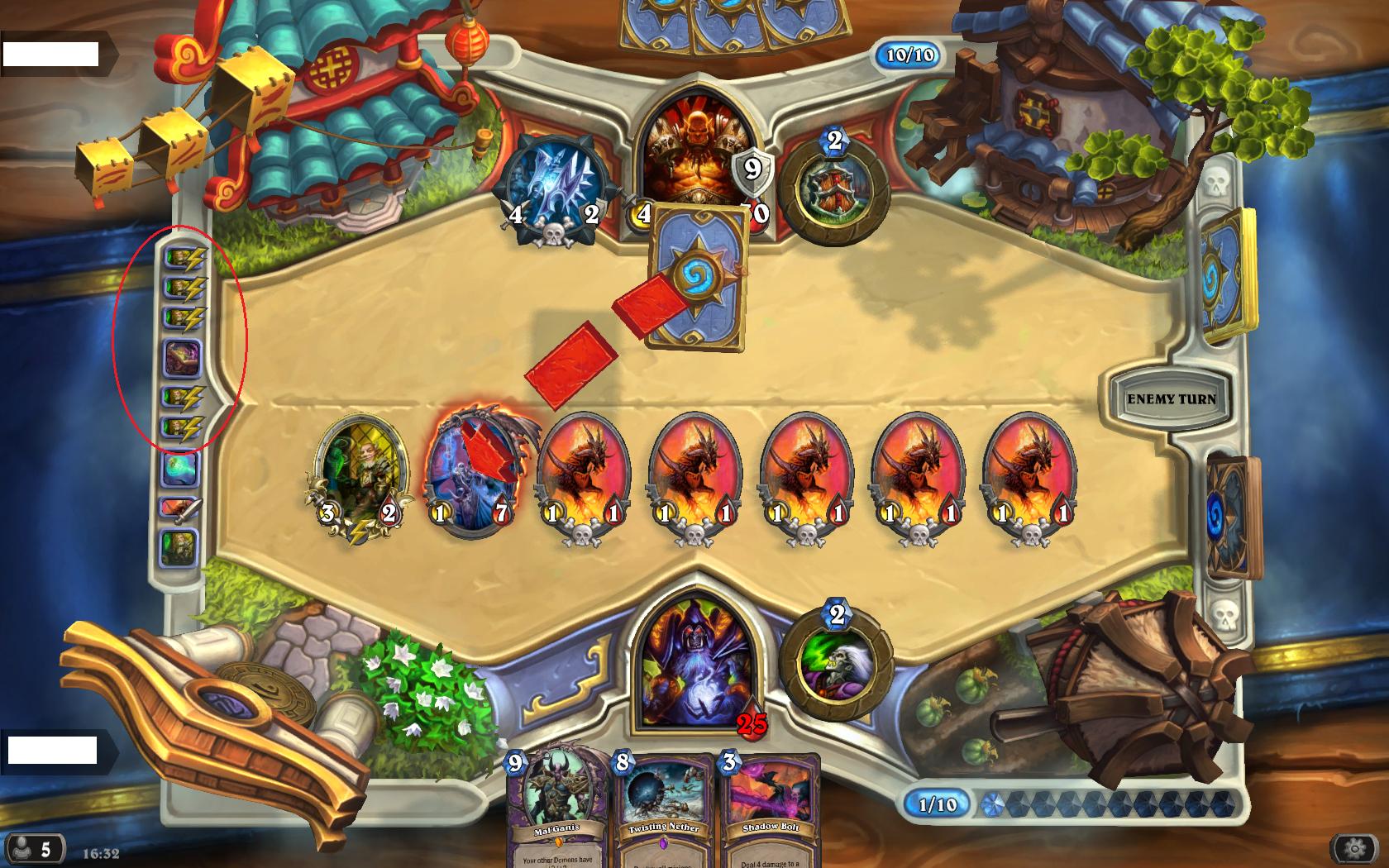 Mal'Ganis is your game finisher and should only be used when you can guarantee buffing your steeds or when you need it to survive. Once your board is full of steeds, it can act as a finisher similar to Force of Nature and Savage Roar, capable of dealing 18 damage in a single turn. After turn 10, it can be played together with Voidwalker for an emergency wall, in case you are struggling to survive. 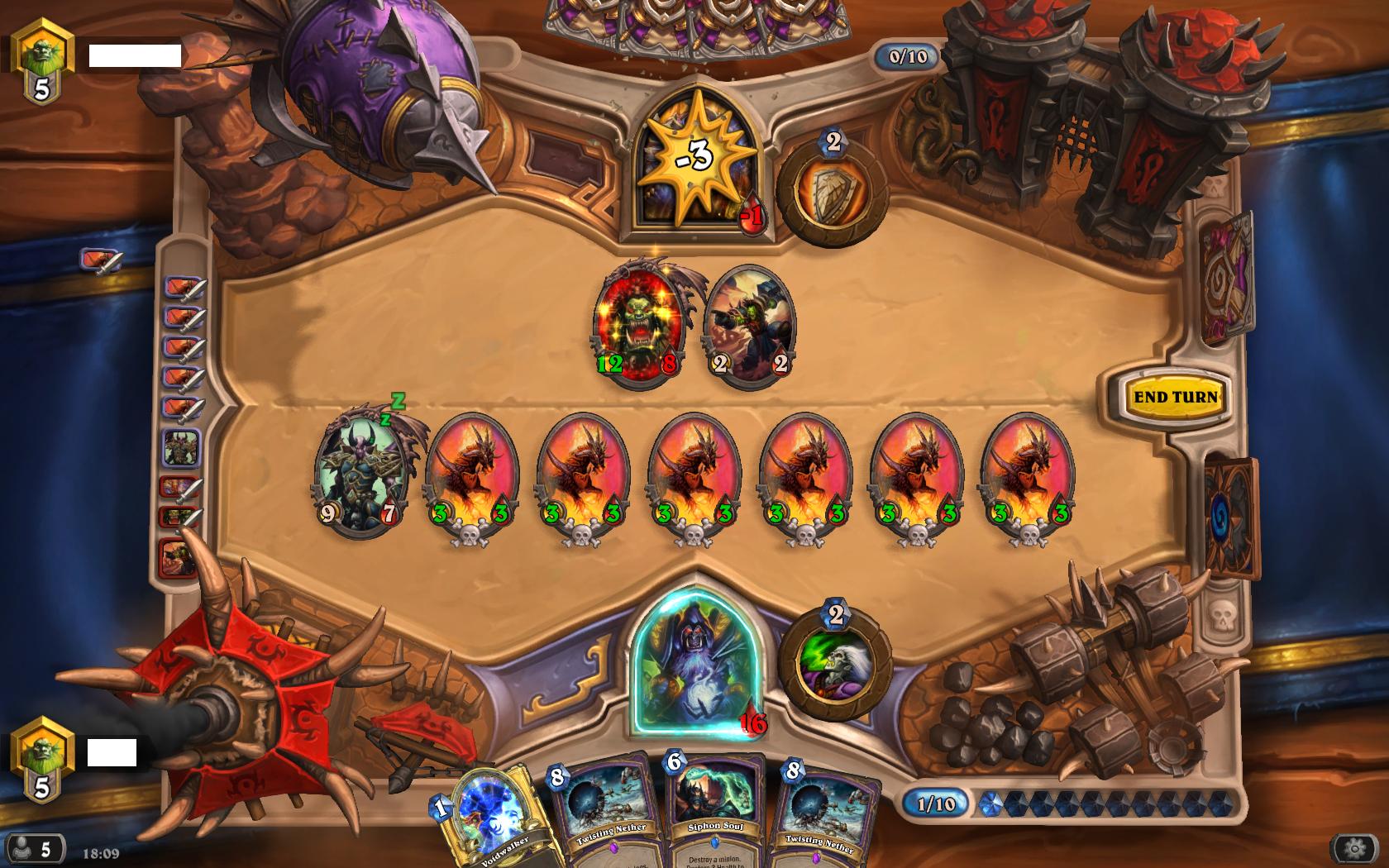 Having too many Dreadsteeds is more often than not a bad thing. A smart opponent will try to take advantage of your full board and use it against you. I found 5 steeds to be ideal, but 6 is also fine (and sometimes better). After you get your steeds on the board you should generally try to get rid of Baron Rivendare as soon as possible to make room for your other minions. 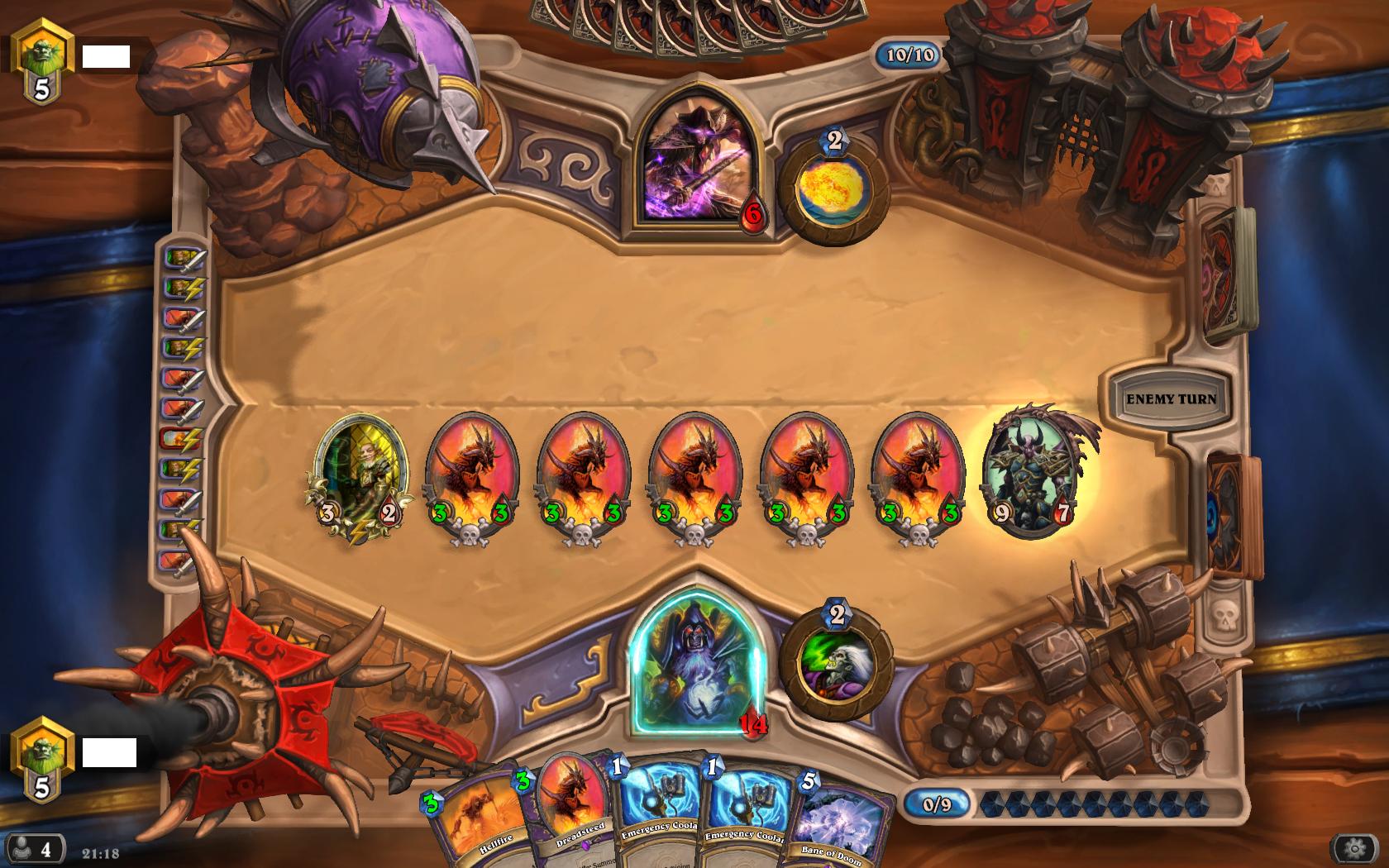 UPDATE: I almost fell to rank 7 when testing various versions of this deck because I was facing too many fast decks and often couldn't keep up with their early aggression. I tweaked the deck to have a much better early game and quickly climbed back to rank 5 with only one loss.

Power Overwhelming is a great card, but it requires you to have a minion already on board and can often be a dead card in your hand, especially against aggro decks. I put in two Voidwalkers to help this deck better survive against early game agression. Even if they don't trade 1-for-1, they put minions into range of Mortal Coil, Darkbomb, Shadow Bolt and Hellfire so you can clear them up much easier later.

While Voidcaller can be amazing it often falls short as you don't really need to get your Dreadsteed on the board early and this deck doesn't run other demons except for Voidwalker(not great value) and Mal'Ganis. Pulling a Mal'Ganis can be really helpful sometimes, but most of the time it just eats an Execute, Hex, or summons a Big Game Hunter for your opponent and you don't want that to happen.

Unstable Ghoul is an excellent card in this deck. It helps fend off early aggression and can be played together with Hellfire or Doomsayer to make a board clear much more likely. It will also help you multiply your steeds if you can set it up.

Lord Jaraxxus gives you another win condition and will single-handedly win you the game against slower decks that don't have much reach like priest.

I often felt like I would want to have another card instead of Bane of Doom. Sure, it feels great when you get a Mal'Ganis or Doomguard, but it doesn't happen all that often for this card to be worth it in my opinion. The 2 damage is just not enough for 5 mana and if you get a 2-drop you have probably just lost the game if you're playing against a faster deck.

In a control meta, Emperor Thaurissan would be an amazing card in this deck, but against faster decks you can't really afford to play it unless something went horribly wrong for your opponent. The cost reduction helps a lot, but is not really necessary to get your combos off. If the meta slows down, I would definitely put this card back in though.

Doomsayer is an amazing card in this deck. He will either greatly slow down your opponents early game, soak 7 damage, or eat a silence which would have been used on your taunts or Dreadsteeds. Playing Doomsayer with a taunt minion makes it much more likely to stay alive and clear the board. Voidwalker+Doomsayer will clear most early boards and prevent your opponent from playing minions for a turn, getting you 1 turn further into the late game, where this deck really starts to shine.