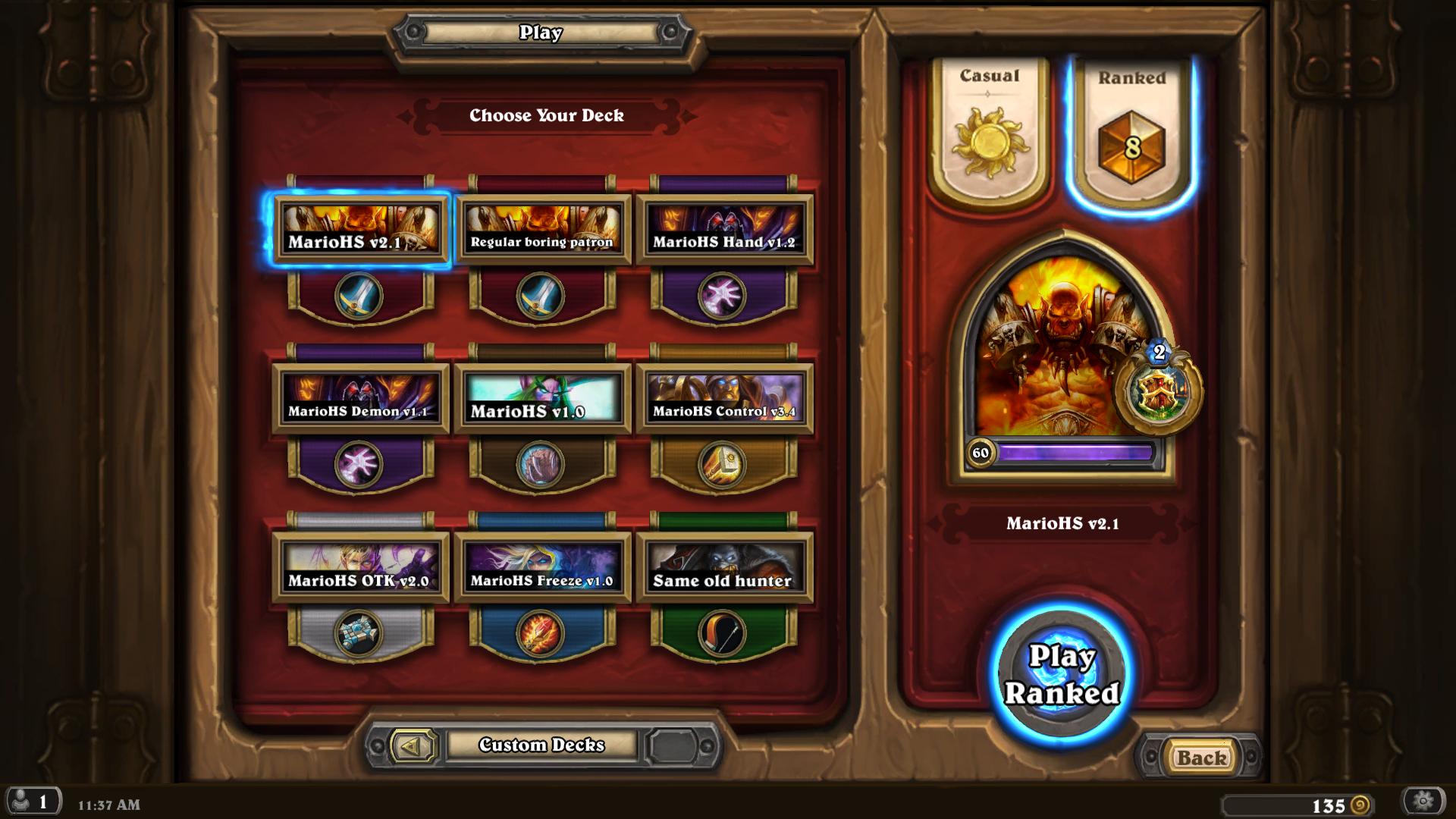 First day of the season:

EDIT: Cards changed: -1 Shield block, -1 Emperor Thaurissan / +2 Frothing berserkers: Frothing berserkers add a turn 3 to the warrior now that the acolytes are gone. It improves the winrate against aggro by a huge margin, as it forces removal or gets value trades early on. Emperor thaurissan although good, is not good enough against the meta I am facing now: a lot more aggro than before. Shield block is great but there are already many ways to get armor.

A lot of people have been asking: I do stream occasionally: twitch.tv/mariohs_pro

FULL GUIDE: The Begginer guide (a simplified one) is completed. A Full Guide which will allow you to master this deck and Control Warrior in General, teaching you all the skills and the mindset, as well as teach you how to tweak the deck against different metas and throughout the history of hearthstoneis under development.

Thank you All (mostly) for your support.

I sometimes stream if you guys are interested: twitch.tv/MarioHS_pro

Also I'd like to let you all know a very good hearthstone Free tournament website: StriveWire. Multiple tournaments per day with prize pool!

Begginer Guide (A short-version. The Full guide is under development):

PS: If you like reading control warrior guides, please check this one, made by one of my students: http://www.hearthpwn.com/decks/374559-legend-spiders-control-warrior-deck-w-guide

Introduction: For all of you who don't know, I am MarioHS, a competitive Hearthstone player for Team SecondWind. I sometimes stream and I also coach hearthstone. If you are interested in coaching click here. I love helping people so I decided to start making Hearthstone guides. I usually end up in top 100-200 legend every season, having been rank 1 and 2 a couple times. Do not hesitate to contact me through twitch or hearthpwn if you have any doubts or tips in how to improve my guides.

First of all I think it is worth to start this guide from the basics of control warrior. As I usually point out in my coaching lessons, if we think of control warrior as a Warrior who has resources, everything gets simpler.

Every card you own can be thought as resources. You should always spend your resources wisely and conserviatively. Having said this, you should start spending the resources you already committed to rather than the ones you haven't. We will talk more about this later on. Warriors are a class which have way more resources than others, so it's important to take advantage of that. We will discuss priorities when deciding which resources you should use and when.

You are not the only one with resources and that is important to understand. Other classes have them to and it is very important to keep track of these. The general strategy of a control warrior is to use the resources in such an efficient way that you will starve of opponent resource-wise and then start playing your big threats.

Priorities regarding your resources:

As discussed earlier, the priority you assign to each resource matters. This section will be broken into 3 different subsections, according to the different possible stages of a game:

(from the the highest priority to the least)

Situational: Revenge, this card should only be used in the early game if there is a threat of a board you cannot control (For example, the enemy board being full with 1/1 recruits just before the paladin enters turn 5 (quartermaster).

Weapons are the best removal for the early game because they can kill pretty much any minion in the intire game with 1 or 2 swings.

Shield Slam should always be used before Execute, because the later you are in the game the more chances you have to get an activator for Execute. Shield Slam is a bit more difficult to make work because you don't always have enough armor.

In the midgame, it starts to get tricky as the priority can't be calculated by card importance but by availability. This means you have to take into account a couple different things when calculating which resources you should use. I will try to explain this better:

NOTE: You should never try to get Death's Bite if you already have Fiery War Axe, or vice-versa.

If you already have one card from the mulligan cards, it is recommended to keep it, because you might not get a better one and this way it is safer.

Replacements (in order of best to worst):

Here you will be presented with examples of how to tune your deck towards the meta. The examples are in order of importance and efficiency. The examples are to be used as such: If the first change doesn't work, you should try it along with the second one.

Hope you have enjoyed the introductory guide.