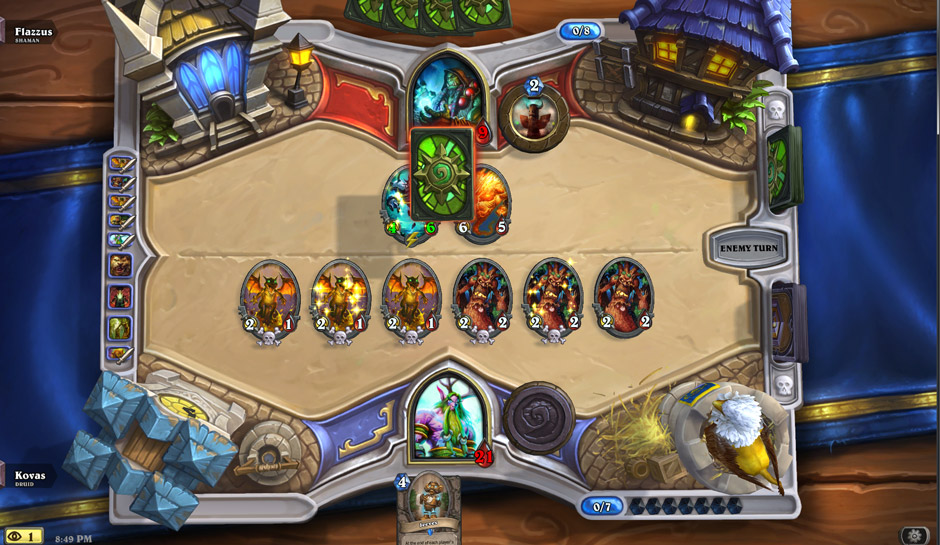 Been playing around with a new build for this using Sea Giant and Clockwork Giant that has been working great!!  Still not a Tier 1 deck by any means, but it feels much more competitive while retaining all the fun/surprise factor.  Game play is still basically the same, except you have 4 8/8 dudes to drop early on, similar to hand-lock, but in reverse :)

This is a really fun to play temp deck that's had some decent success for me when I happen to play ladder.  It's pure tempo and card draw.  Soul of the Forest actually works really well.  Give it a shot and let me know if you think of any improvements.

Goal of the deck is to drop as many hard to kill minions as possible, then around turn 4 begin the buffing via Power of the Wild and Soul of the Forest.  I like to drop Coldlight as soon as possible to increase the odds of the combos going off.  Between Coldlight and Naturalize, the opponent almost never draws cards off of Jeeves.  Save the Naturalize for annoying blockers, otherwise just keep going for face and you'll quickly outpace anything.

Latest Update:  Current build is 27 wins - 8 losses - Streamlined it into a fun-house of minions.  Seems to be working for me from Rank 14->9.  Give it a try! :D  Remember, drop your hand and keep digging until you get the combos going.

Thanks to asdir for taking the time to put together a guide on how to play the deck. (pasting below) I haven't had the time myself to play in a while, but am definitely looking forward to seeing what the next expansion will add...

So courtesy of asdir here's the deck guide:

Generally, you want to be able to play minions on curve for at least 3 turns; the more minions, the better. Since Eggro Forest is an aggressive deck, mulligans are not dependent on match-ups. Having said that, against face hunter it might be wortwhile to run a higher risk to fetch at least one egg, ideally the nerubian (makes mad scientist/explosive trap unplayable early on).

Do not keep: Jeeves, Soul of the Forest, Power of the Wild, Savage Roar, Naturalize; all are exclusively useful for plays in the mid- and later game (Power of the Wild might have rare exceptions)

Always keep: The eggs (do not keep doubles unless you have Power of the Wild also); 1 drops and 2 drops so that you are sure to play a minion in both first turns.

Conditional keeps: Abusive Sergeant (as cheap egg-activator), Innervate (if you have a chance to play a first turn 2/4, you might want to take it)

Changes for coin: If you start second, you have the ability to adjust the curve. The Abusive Sergeant should definitely be kept, since the coin makes sure that playing him does not mess up your curve, even if he's not played as activator and just as normal buff. Sometimes coin also opens up the possibility for a possible turn 2 or 3 Power of the Wild.

Card draw: Every card that has the word "draw" on it is part of one big combo (for want of a better term). Those four different cards in the deck include draws for your opponent. But since they come in such a big mass, the individual negative impact of each one of them is diminished; in the case of Jeeves often eradicated even. The card draw will give your opponent more choice, but the benefit of each addtional choice becomes smaller with each card drawn, since he (unlike you) likely cannot play all of them at the same time. And even the drawback of an isolated Coldlight Oracle is small here since you will usually be quicker in playing the drawn cards than your opponent (firstly, because in the early game it matters that your opponent likely drew more costly cards than you and, secondly, because your cards do not very much depend on the board state, as long as you have any minions [see Buffs], while the opponent's drawn cards might).

Buffs: This is the part of the deck that creates the value on which it carries the win home. The stickiness of the creatures together with their high numbers courtesy of the card draw mechanics creates board states which are necessary for the universal buffs (Power of the Wild, Savage Roar, Soul of the Forest) to get consistent and high value. To some degree this extends to Dire Wolf Alpha, which with skilled placement serves more than just the minions on either side. In the case of Soul of the Forest, the buff mechanic of the deck is even self-perpetuating. Your opponent will find himself in situations in which the most powerful weapon against Eggro Forest, i.e. mass removal like holy nova, consecration or hellfire, becomes utterly impotent. And that makes your victory just that much sweeter.

Posted a video of a few games with this build.  The warrior match up at 12:55 was particularly fun :)