Deep down, we all know that the ultimate question to life is whether who’s going to win in this epic battle: An army of legendaries with a total stats of 1000/1000 on turn 6, or one unstable boi? It turns out that it has already been answered all along. Here it is: 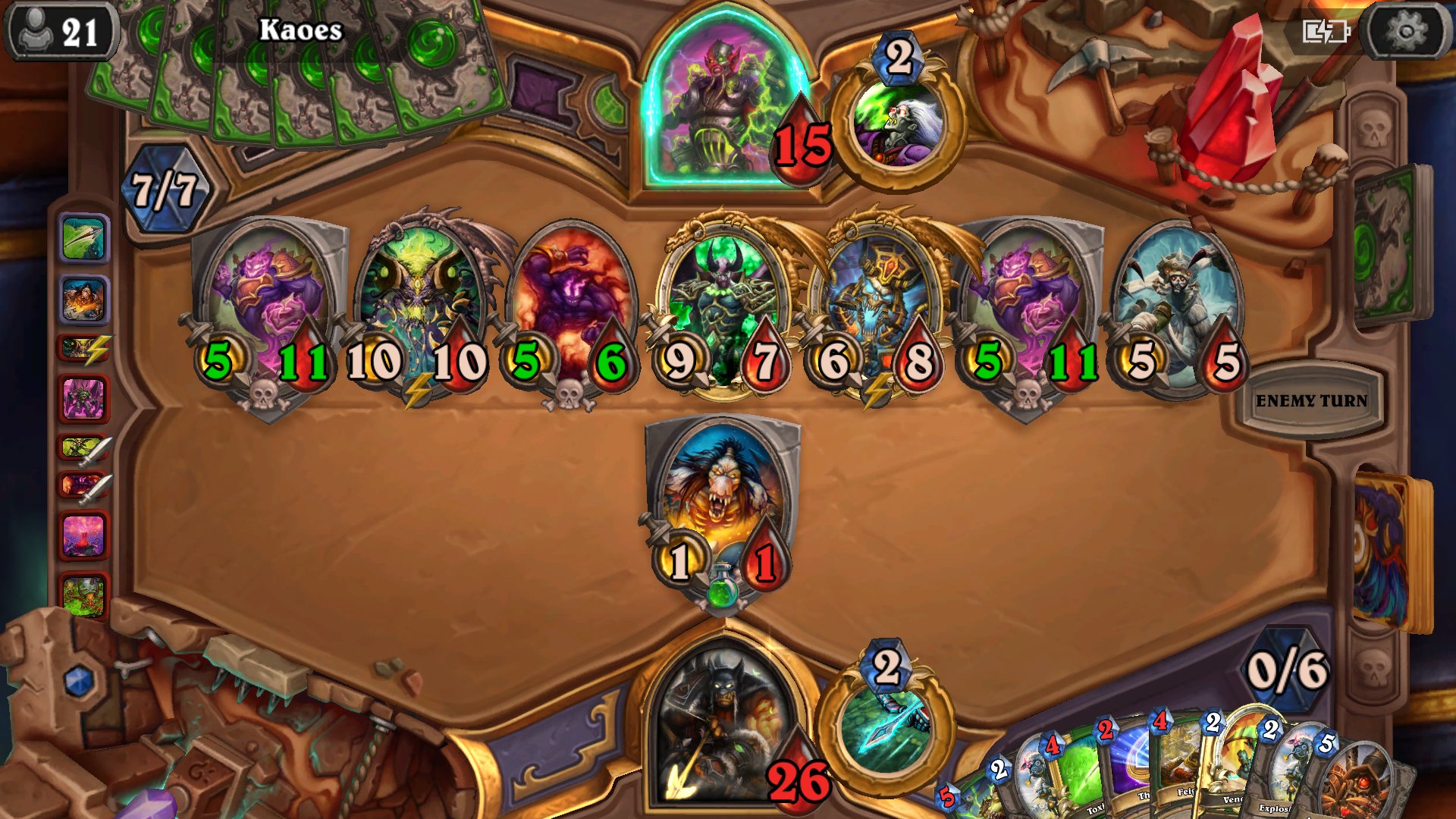 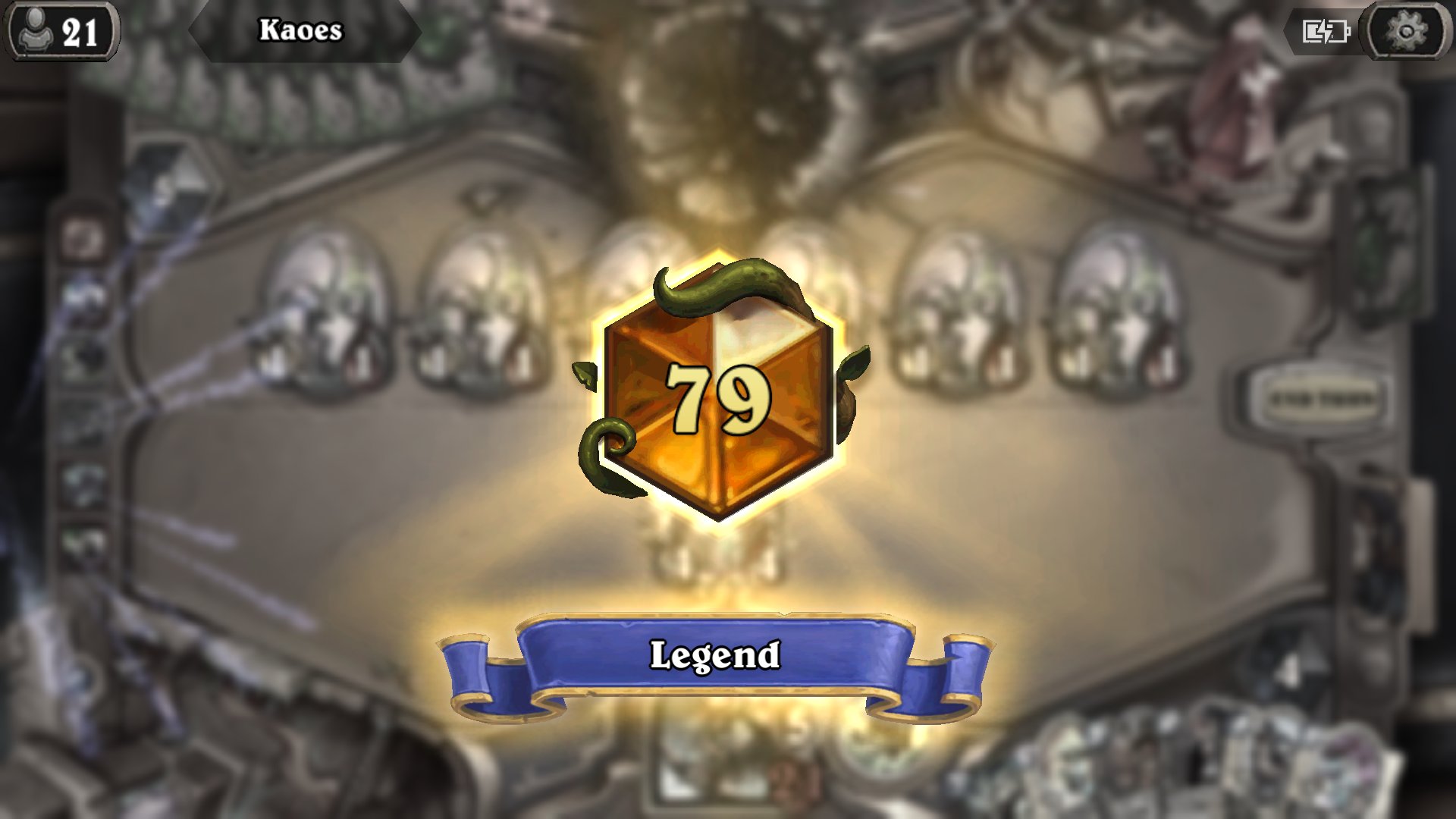 Also, it turns out that Control Hunter isn’t a meme at all! I played this version of Control Hunter from 250 to rank 79 legend, with a winrate of 35-21 (63%) over 56 games! I’m not claiming it’s tier 1 or anything, but surely it’s a legend viable deck, maybe somewhere around Tier 3 even. This is a really good thing for Hunter as a class, because apart from Mech Hunter, Rexxar hasn’t been treated very nicely for the past couple expansions.

More screenshots of this deck in action: 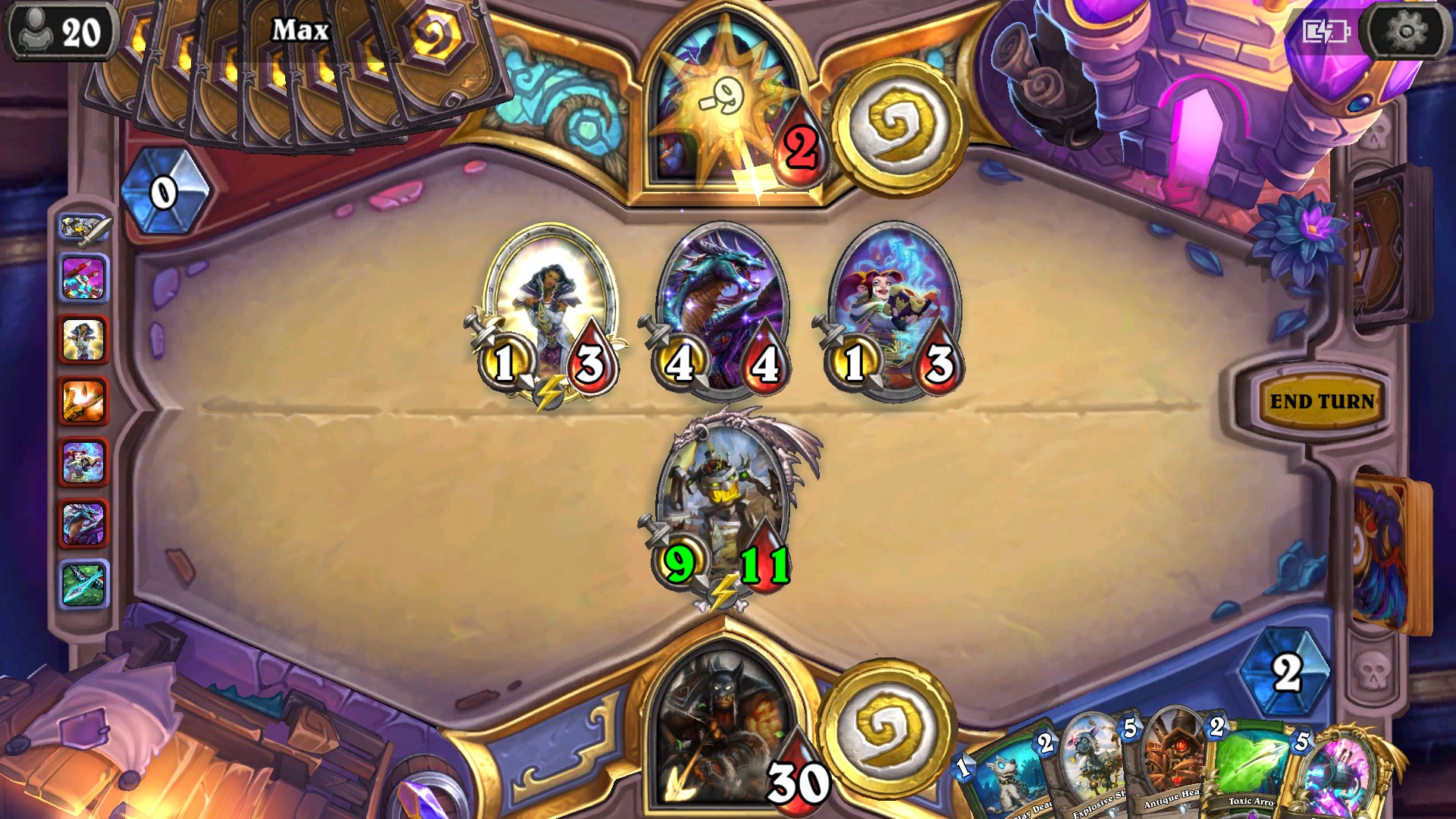 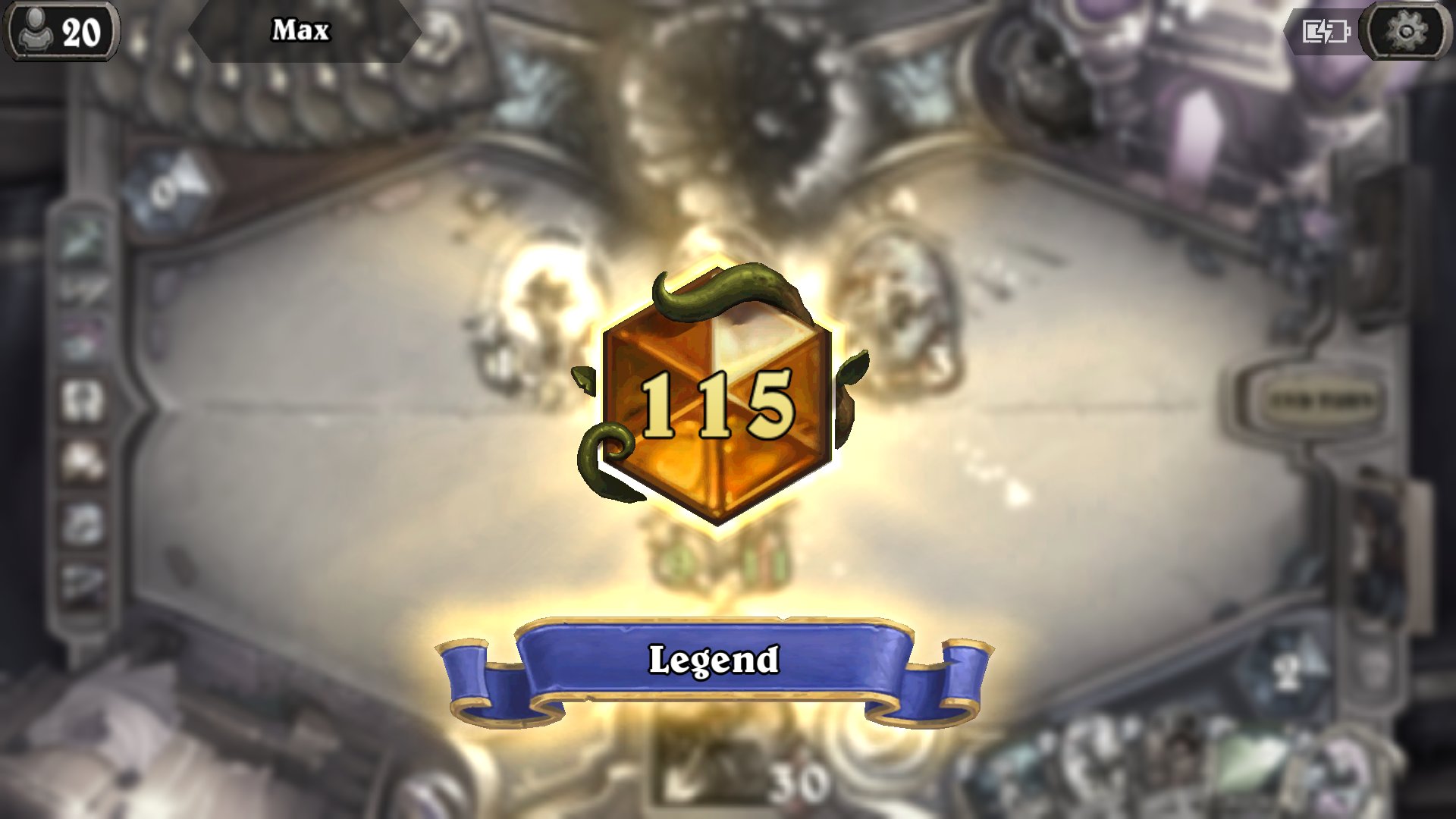 I had tons of other instances where my Sylvanas just stole all of Big Priest’s minions, or I got three or more legendaries from Sneed’s Old Shredder, but I forgot to screenshot them all!

So how does this deck work? The deck is highly synergistic (as with most deck that strive to succeed in Wild), so you need to be aware of every combo in it to extract the most value. I’ll explain all the card choices and the general gameplan in the section below.

Explosive Sheep: This card is a crazy anti-aggro tool. It deals 2 damage by itself, deals 4 damage for only 3 to 4 mana with Play Dead and Feign Death, and nuke the whole board when you pre-emptively play it then play Venomizer on it (or trigger with Play Dead). If you still feel short in clears, you can discover them again with Nine Lives to give you the 5th, 6th, 7th and 8th board clear!

Unstable Ghoul: Another source of AOE. Although it only deals damage for 1, that’s oftentimes enough for Paladin, and the taunt obviously help (with Sheep, sometimes you can only trigger it the following turn). The main reason it’s included in this deck is the synergy with Toxic Arrow – it’s a nuke on EVERYTHING that doesn’t have Divine Shield. I got someone tried to report me for apparently ‘exploiting a bug’ after his board got wiped running into the Ghoul; it was hilarious. Ghoul + Arrow is a great answer to Big Priest board, Darkest Hour board, or any big board for that matter. Any decks that doesn’t run silence or Devolve will just have to give up their board.

Ursatron: Really, really strong inclusion for the Control package. We don’t run too many Mechs, so there is a high chance you’ll get what you want with Ursatron. Although it dilutes your Deathrattle pool for Nine Lives a little bit, it’ ABSOLUTELY ESSENTIAL for cycling purposes – you don’t have many cycle cards in Control Hunter, so you have to make the best use of them. I prefer it over Tracking, because Tracking both gets me into fatigue way earlier, and risk me ditching some cards I really need, but not immediately. Also, it’s a Mech, so it has synergy with Zilliax and Venomizer, and it has 3 health, so you can play Toxic Arrow on it.

Venomizer: One of the cards that ensured Control Hunter isn’t a garbage meme deck. Its synergy with Sheep and Missile Launcher is absolutely crazy. If Ghoul is a one-turn board wipe, Venomizer + Missile Launcher is a continuing wipe for as long as it lives. It can answer most board thrown at it, and gives Darkest Hour and Big Priest quite a tough time. Remember to play Launcher before Venomizer so you have a bigger body after Silence and Devolve.

Missile Launcher: Apart from the synergy with Venomizer, it also has synergy with Toxic Arrow (Poisonous) and Zilliax (Lifesteal). Or you can just use it as a board wipe for one every turn. Very flexible card.

Sylvanas Windrunner: One of the most powerful deathrattles in the deck. This minion allows you to just use your opponent’s minion to finish them off for you. And it’s not fun for them if you get a second, then a third one from Nine Lives!

Sneed’s Old Shredder: One of the ways to win the late game. It’s a mech, so it has synergy with other Mechs, and it has deathrattle so you can abuse it with Play Dead and Nine Lives. A crucial card for you to win the long game if it comes to that.

Zilliax: Just a really strong utility mech. Remember, if you magnetize Zilliax on an Explosive Sheep, the boardclear will also heal you afterwards.

Antique Healbot: So you might think… this deck sucks! It will just fold to damage, no matter how many board clear it has! That’s where Healbot comes in. It’s a great stabilizing tool that can be magnetized and can be fetched from Ursatron.

Play Dead/Feign Death: I think there’s no need to explain what these two do in this deck.

Nine Lives: The MVP, the card that enabled all of these shannenigans. It’s board clear, it’s a Mind Control, it’s extra legendaries, it’s a draw, it’s anything you need! The card just pack so much value and tempo for 2 mana, it might be impossible to play any slow Hunter without it.

Deathstalker Rexxar: You must be crazy if you think you can cut Rexxar from slow Hunter deck. Apart from its flexibility, there are some matchups that you absolutely need some sort of value – for example, against deck that never run out of resources like Odd Paladin. You can only clear the board that many time, so you need a counter pressure strategy as soon as you’re comfortable, and Rexxar does just that.

Stitched Tracker/Master’s Call: The thing about highly synergistic deck is that you might need specific pieces for specific situations, and these tutors do just that. Tracker also gets you a copy of the minion, so it’s extra value.

Dirty Rat: I love Rat in this deck. It’s a combo disruptor, it’s great versus aggro and it can just pull some value your opponent was trying to hold directly into a poisonous clear.

Basically, you try to Control the early game by clearing your opponent’s board repeatedly (if they’re aggro) or dig for your answers in particular matchups with Ursatron, Stitched Tracker and Master’s Call. As with almost every other Control decks, this deck’s gameplan varies with each particular matchup, and I’ll get to it soon in the section underneath.

Your win-condition is from getting cards like Explosive Sheep to repeatedly clear in the early game – Stitched Tracker helps with this because it almost never fails in fetching one of the early cards (or it can be used to fetch for Antique Healbot once you stabilize). If you hit the right card sequence, most aggro matchups are a breeze – they just don’t have anything left and you can start healing back up and solidify your board position. Dirty Rat helps pull out either very small tokens, or Quartermaster, either way it’s really good. Odd Paladin is tougher since they can keep generating resource indefinitely; but in both matchups, try to get the foothold of the board as soon as you can and counter-pressure them. Aggro is really bad at handling counter-pressure.

Kingsbane Rogue is weapon based; therefore it’s much harder to win. Don’t be afraid to coin out Dirty Rat, you really need to snipe the 3/1 weapon retriever in this matchup. You can still win by clearing the board, playing taunts after taunts, and generally chip him down low before he can pressure you, I’ve won several times like that. Just throw down all your Sheeps and stuff, they don’t have many minions, so you really need to minimize minion damage and try to get on board early. Try to not break your own Zilliax Divine Shield, so it will take 2 hits from him to kill it with his Kingsbane – both heals you for a taunt and deal at least 6 damage to him.

Aggro Mage is burn based. You can win this matchup by absolutely exhaust his minion pressure, then heal up with Healbot or Zilliax (Zilliaxes, if you get more from Stitched Tracker). There’s nothing he can do without a board and when you can heal up every turn.

Midrange decks are very bad matchups for this deck – since our early cards are really good at clearing small tokens, but not very good at dealing with big minions; also, our Dirty Rats are bad. So you have to try setting up Poisonous clear and get the most value out of them as possible. If your opponent knows what they’re doing, they will just play one or two threats per turn – although that’s very hard for you to deal with, it gives you time to draw into Rexxar and Missile Poisonous for a commanding late game. Sneed’s value comes pretty handy in the late game too, he can get you a giant board out of nowhere to prepare for counter pressure.

Slow Warlocks just CANNOT defend against you. Whether you have Sylvanas, Poisonous Missile Launcher, Sneed’s or Rexxar, they will 100% succumb in the long game. That’s why they have to rely on their main gameplan, and you have game against both of them – Poisonous clears for Darkest Hour and Dirty Rats for Mecha’thun. Against Mecha’thun, you can discover up to 4 Rats if needed. Against Darkest Hour, you can use your Missile Launcher and Explosive Sheeps to clear his token if he just play them out because he can’t do a pepega Bloodbloom turn.

This matchup is very very favoured for you if you can get a Rexxar or Sneed’s down early. Sneed’s + Nine Lives, Play Dead and Feign Death represent crazy, crazy instant value, while Rexxar is slower, but unlimited value. Odd Warrior might be able to deal with one, but not both at the same time.

We’re favourable, but not by much. However many times we can clear the board, that many times they can make another one. That’s why it very much depends on RNG – whether they have Barnes, whether they play things like Ragnaros to pressure us, whether they get Y’shaarj down turn 6, how early can we trigger Sylvanas, how many Sylvanas can we get… Sylvie is the MVP in this matchup – if she does what she does, you’re very much favoured to win.

This is the EXACT gameplan you need to follow against Jade Druid: Pressure them as soon as you can to force them to use as many board clears and removals as they can – Poisonous clear their medium sized Jades – steal their big Jades with Sylvanas or make a big board with Sneeds – kill him before he kills you. If you don’t follow this gameplan, you have almost no chance against Jade. But if you know what you’re doing, the matchup is absolutely winnable.

It’s pretty similar to Odd Warrior, apart from the fact you will need to draw Rat somewhere along the line if you’re starting to lose control of the board and need to snipe their Prophet Velen to play around suddenly dying.

That’s probably it. If there’s any question, just comment below and I’ll be answering. Happy climbing!