Thanks so much for the support! I hope you have fun with this deck! And if you do, please show it by dropping a like :P.

Will update the stats as i play more 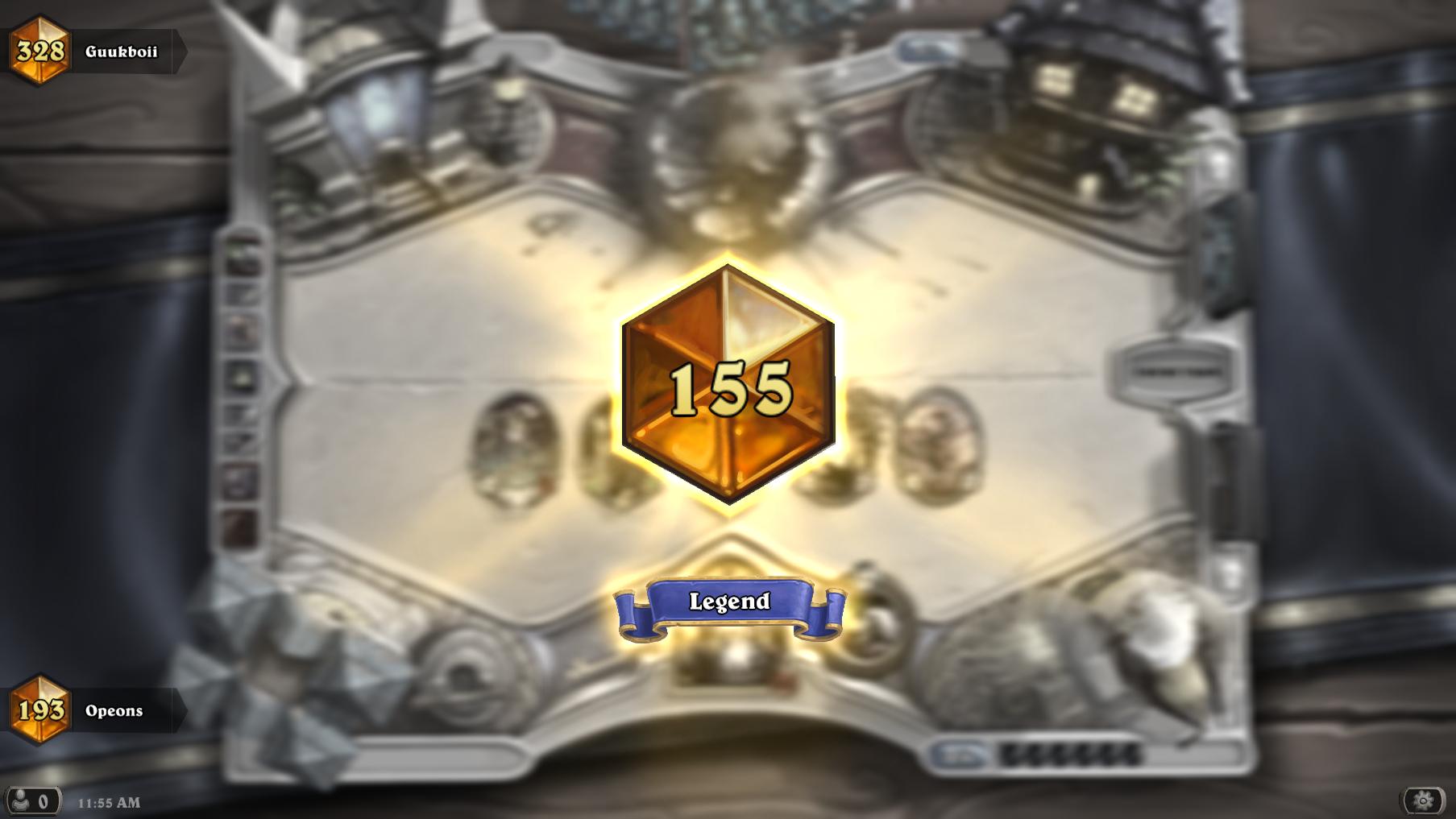 So, as you can see this deck has some of the key cards that are in zoo: Void Walker, Flame Imp, Undertaker etc. But unlike zoo it contains great late game like: Molten Giant, Sylvanas Windrunner, Dread Infernal and Lord Jaraxxus. The idea is to start strong, (maybe not as strong as zoo but good enough) and still have big cards to swing the game around.

Per example: This rogue here thought it was a good idea to use both his saps on a flame imp and a haunted creeper, so what happened was: 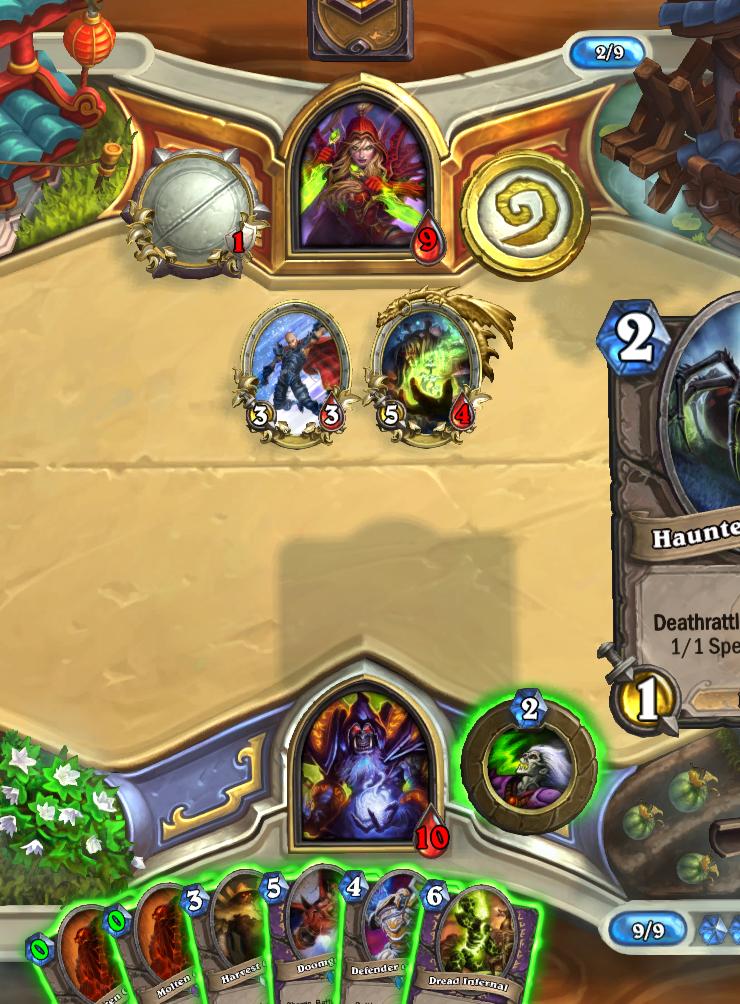 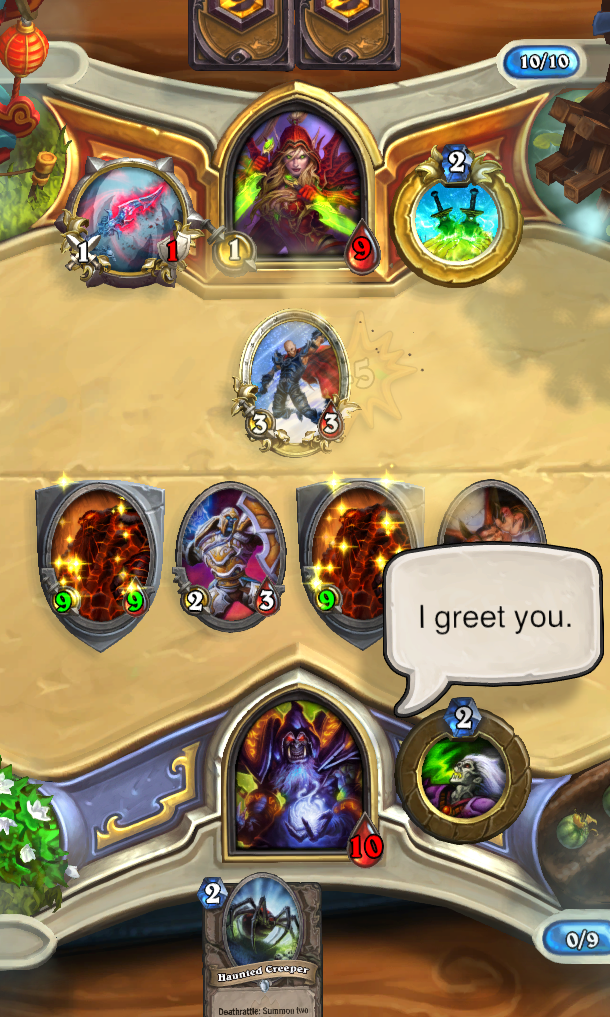 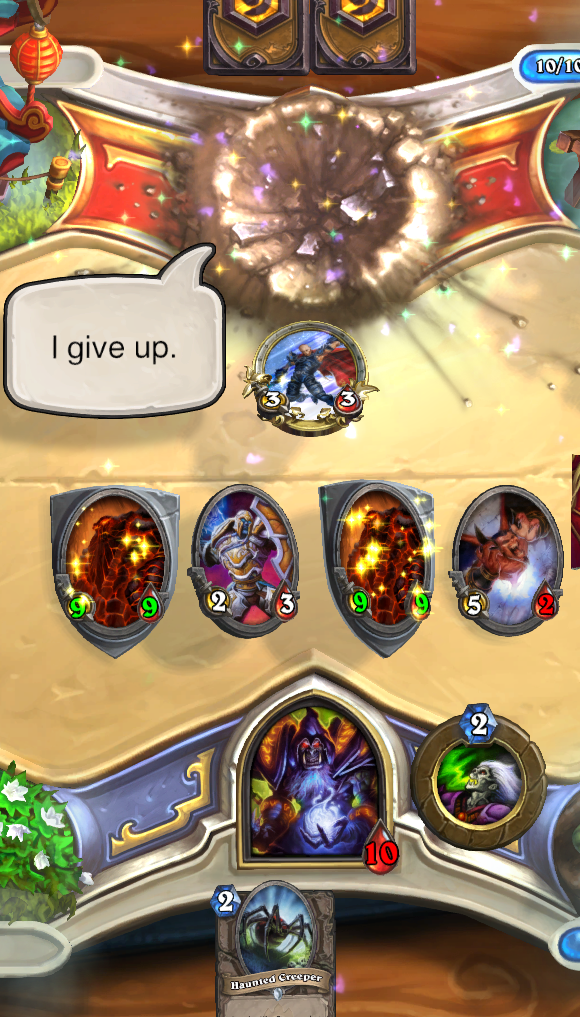 I've had these reactions multiple times and it's just amazing. But all that aside, let's continue with the deck talk.

The only board clear in the deck is Shadowflame, and i dont think more is needed since you usually use your minions to trade efficiently. Shadowflame over hellfire because you have some great targets to shadowflame: Voidcaller, Molten Giant, Sylvanas Windrunner and Jaraxxus's hero power of course. Since the opponent in the beginning usually thinks this deck is zoo, they usually use their hard removal like Shield Slam on your smaller minions, so your late game cards are safer. And with the 10 deathrattles in this deck we of course run Undertaker. Loatheb is in here to protect the board from aoe, and it's just a solid 5/5.

Guide for the hardest matchups. (Still being worked on)

So, a lot of people have been struggling against hunter and that's understandable cause warlock does well against warlock in general. I always play this matchup very defensively in the early game and try to kill them as fast as possible a bit later. Example: The hunter starts strong (as usually) and you react with cards like haunted creeper, zombie chow and ironbeak owl . You always try to make efficient trades and clear the board as much as possible, Sledge belcher is a great way to stall.  Once you get the turns 6-10 you fight back and become aggresive. You need to pressure with cards like molten giant, illadin stormrage and doomguard (I sometimes even play this by itself when I still have cards in hand cause hunter has a hard time dealing with it.) Once you have your board developt you play loatheb and seal the win. This won't always go smoothly of course, sometimes you just have to play defensive to survive. In that case try surviving until jaraxxus since hunter usually plays their kill commands when they have the chance so if they think they have the win cause you are at 2 hp, YOU FACE JARAXXUS

Another tough matchup, your early game can get destroyed by Fiery War Axe and late game can be removed efficiently by a card like Execute. So your main objective is to make them waste their removal early and let your bigger cards not die as easily. The warrior's late game will beat you, so  try to end the game as quickly as possible. Voidcaller is also an important card since warrior doesn't run (many) silences, so i will most of the time get huge value.

Sylvanas Windrunner --> Shadowflame, most of the time it clears board, and whatever big card survives gets stolen ( watch out for Sledge Beldger and other deatrattle cards)

Voidcaller--->Shadowflame, your voidcaller used as aoe, and then it summons (usually) a great demon. (always play your less good demons first if you can before killing the Voidcaller off)

Flame Imp--> Molten Giant: you often miss this play, but it sometimes can be really good to use up all of your mana.

kill Haunted Creeper when playing Knife Juggler: Amazing against the low health early game of  aggro decks, it just gets you so much tempo when your Knife Juggler does well.

And of course Undertaker will become bigger with every deathrattle minion that gets played.

Power Overwhelming --> Shadowflame : Even the littelest of creatures can become a big AoE clear.

Changes made on decklist:

I removed 1 Soulfire because you just have to much valueable cards to discard, unlike zoo where you can sometimes even trick the effect by having an empty hand. And handlock, where you have such a big hand that you can miss some things like an Ancient Watcher.

Added 1 Power Overwhelming, was suggested in the comments a couple of times and still has the same burst potential as Soulfire but works well with Shadowflame and Voidcaller.

Since I found myself hating the Zombie Chow in the control matchups, especially warrior. I cut it for Siphon Soul, wich is just solid removal. Note:  When you are playing against alot of aggro you can undo this change, since siphon often will not be that good and chow will be awesome.

I came to the conclusion that there's just too much aggro to justifie running the Siphon Soul It often became a card in my hand that never got used. So i changed it with 1 Ironbeak Owl because the deck needed silence.

Since Dread Infernal usually was a card that didn't do so much, i replaced it with illadin stormrage. It's just a more solid 6 drop and it's still a demon, so it can be summoned by Voidcaller.

As suggested in the comments Void Terror was added instead of 1 juggler. Juggler didn't get enough value and Void Terrortriggers deathrattles and combo's with Power Overwhelming

Another Juggler was deleted for 1 Nerubian egg, Just a solid deathratlle card, I think even though this deck only has 4 activators that should be enough to hatch 1.

Added 2 zombie chow instead of 2 Voidwalker,after a lot of comments saying Voidwalker was not good enough I finally made this change. Zombie Chow is another deathrattle to make the Undertaker even stronger and is better in the early game then Voidwalker most of the time. It also won't bother your Voidcaller from spawning somthing great. The only problem is that in the late game situations it will often just give your opponent health back.

Okay, this is what i thought I should tell about the deck. Please leave stuff you want to now in the comments so i can add answers to those questions in here.