Tempo Mage Asserts Itself in the Post-Nerf Meta

One of Hearthstone’s perennial archetypes, Tempo Mage is back and commanding respect in the post-nerf meta.

The Highlander Priest archetype crumbled when Blizzard nerfed Raza the Chained with the recent patch, allowing Cubelock to flourish for a short while. Control Warlock countered it initially, but Tempo Mage is hands-down the most popular counter, not to mention one of the most popular decks on the Standard ladder.

We’ll look at DacLue’s Copa America Tour Stop deck list so we have one reference point (and because his is similar to most on the standard ladder) but know that many variations of the deck exist, some featuring tech cards and some featuring an abundance of burn — even Pyroblast. Apxvoid’s list, complete with a Ghastly Conjurer and Fungalmancer, might be the most interesting of them all. Not a common inclusion, Fungalmancer will likely surprise your opponent for now, and its powerful battlecry allows for an extra push toward lethal or for more efficient trades. It will be a while until we have the data to suggest an optimal build, but for now this spin on the tried-and-true formula is doing well.

Despite its struggle against Aggro Paladin and excruciating, draw-dependent mirror matches, a few new cards have allowed the deck to flourish against Control Warlock and push Big Spell Mage out of certain sections of the ladder entirely. Explosive Runes provides an amazing tempo swing and extra burn, but the new legendary Mage weapon Aluneth pulls the most weight, providing the card draw it always lacked. This made it suffer in the late game, dependent on key top-decks. Now, Aluneth keeps your hand full of cards, giving you freedom to adjust your line of play on the fly as the cards pour in.

These new additions round out an already great core set of cards designed to cheat their mana cost for maximum tempo. Two copies of both Kabal Lackey and Kirin Tor Mage allow you to play a secret for free, should you be so fortunate as to have one available. On curve, this is devastatingly powerful. Kabal Crystal Runner meanwhile fills the void left behind by pre-nerf Corridor Creeper, providing an often cheap or free minion capable of value trading or pushing damage. These possibilities for cheap swings should be carefully carried out; don't miss an opportunity to drop Mana Wyrm before casting spells or to cheat out a secret with Kabal Lackey. While Aluneth is active, spill your hand and avoid burning cards on an overdraw.

Secrets offer the potential for massive tempo swings, at best denying your opponent a turn at all. But at rank 5 and above, most opponents will play around those devastating consequences, testing Counterspell with The Coin and playing Plated Beetle into Explosive Runes. If your opponent has the coin and you have these two secrets to choose from, it is almost certainly correct to play Explosive Runes, denying the easy dodge by your opponent, perhaps forcing your opponent to mismanage mana, and setting up a valuable Counterspell play on consecutive turns.

Unfortunately, playing Tempo Mage optimally requires more thought than throwing Fireballs at the opponent’s face. Ideally, you will grab the board with Mana Wyrm on turn one, build that board and draw a secret with Arcanologist on turn two, and cheat out your secret with Kirin Tor Mage on turn three. 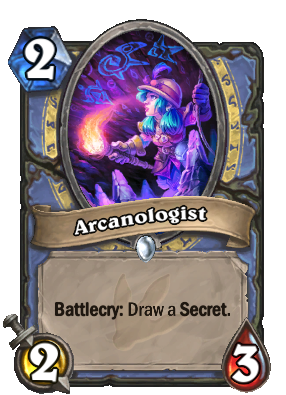 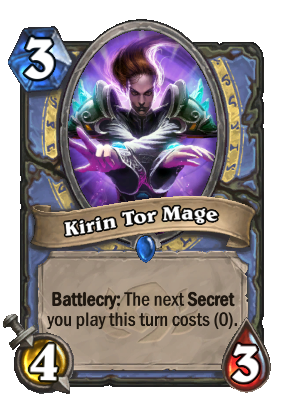 That’s the ideal first few turns, probably allowing you to remove enemy minions, push face damage, and deny tempo in the mid-game with Counterspell or Explosive Runes. The continual chip damage from minions after clearing the board is essential, too — allowing you to push for lethal damage earlier with the 50+ damage burn potential in the deck before finding additional resources via Primordial Glyph. With all of that at your disposal, don’t be afraid to use Frostbolt, Fireball, and Firelands Portal to clear minions and maintain control. This deck loses, after all, when it loses the board and takes too much damage before finding burn. As in all things Hearthstone, situational awareness is key. Consider your health and your opponent's, your hand and remaining cards, and your opponent’s next possible plays. Then decide to either push for lethal or grind out value trades. Experienced Zoolock players will feel at home here, as they will be accustomed to considering lines of play and committing to them in the mid- to late-game.

Our worst match-up in the current meta is Aggro Paladin. Against it you should mulligan for Mana Wyrm, bait any spell sans The Coin into your Counterspell, and do your best to keep the board from getting too wide. Controlling the board into turn five will make it much more likely for you to simply hit the Paladin hero with your minions once and burn them out over the next few turns — but doing so requires a great draw on your part and a bad draw on their's. It’s not in DacLue’s deck, but some players have chosen to include a copy or two of Ghastly Conjurer for added defense against decks with a wide board presence. A less common tech choice, Acidic Swamp Ooze can devastate opposing Tempo Mages and Cubelocks. I, like DacLue, opt for Pyroblast — because few things are more satisfying than top-decking a game-winning ten-mana spell.

As long as Aggro Paladin is around, especially the Murloc variant, Tempo Mage won't wreak havoc like Apxvoid would like it to. But it has helped alleviate concern the community had about the power level of Cubelock. As it turns out, Voidlord does very little to stop the burn spells going over the top of it.