Rogue is definitely not a class that I have spent that much time playing.  The competitive decks that the class has offered since Hearthstone's release have never really appealed to me due to the fact they weren't very minion based and were based more around spell combos.  However, the other night I saw a pretty interesting Rogue deck posted on Twitter from Chandyland, a player which I respect because she hits legend every season.  She claimed to have gone 10-3 with the deck at Legend, which is very solid so I decided to give the deck a whirl.  Within a couple hours of playing the deck I had moved from 700 legend to 200 legend and was thoroughly impressed with the smooth play style of the deck and its ability to last in the long game by utilizing so many value cards. 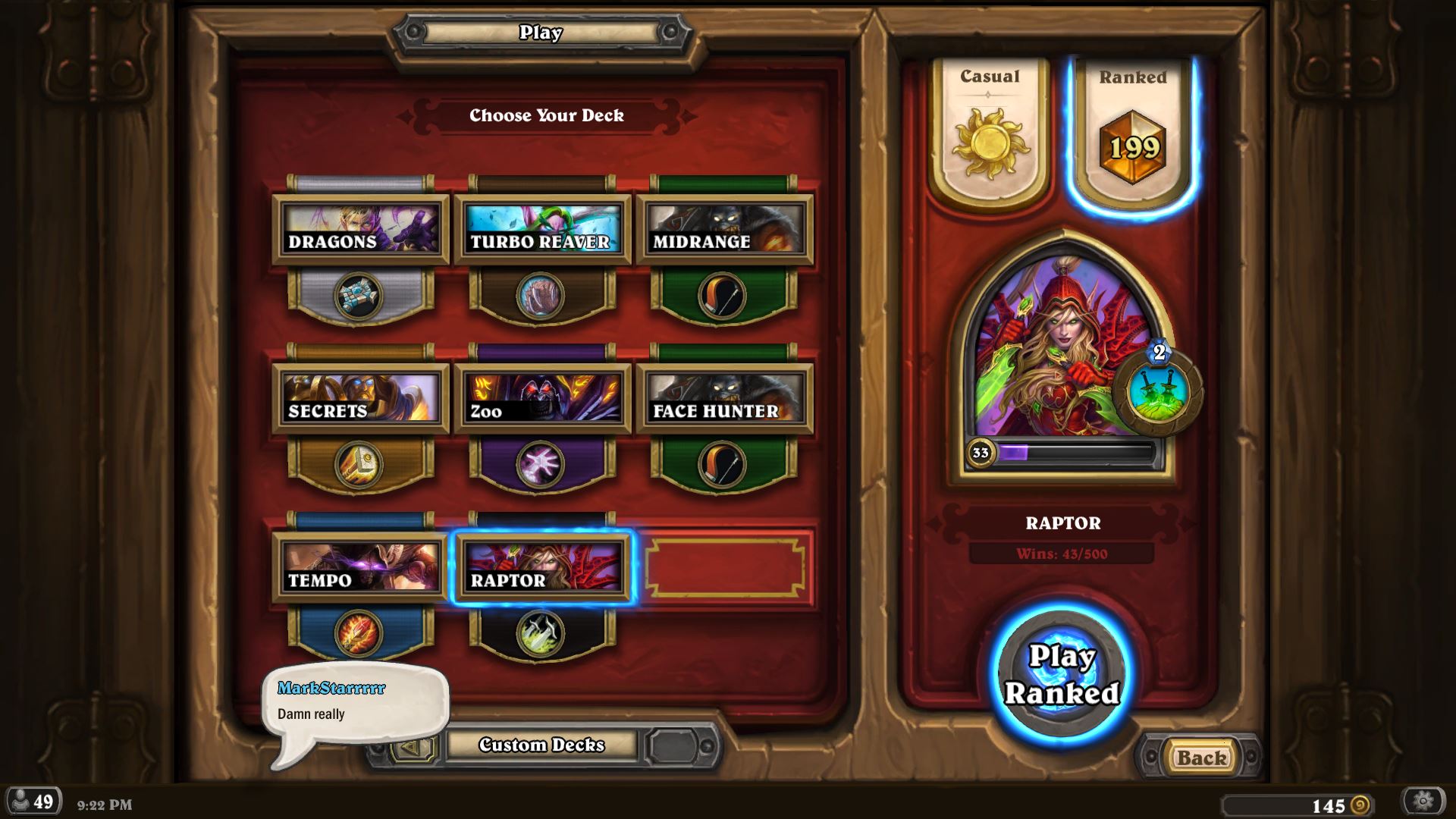 Unearthed Raptor itself is a terrific card.  Generally, Deathrattle minions have slightly weaker stats in order to balance them, but Raptor has very good stats for a 3-drop, weighing in a 3 Attack and 4 Health.  The deck is basically built around Raptor, and your typical gameplan is to develop an early board, play a Raptor and then copy one of your Deathrattle effects and then seal the late game with a big finisher like Sylvanus, Dr. Boom or a Tinker's Sharpsword Oil.  The deck is very much a Midrange deck and wins by making plays that yield a little bit of value every turn over the course of the entire game.

Backstab:  Solid removal for early minions and a great combo activator.  You want to keep this card if you think you are facing decks that will be playing early minions.

Deadly Poison:  Great weapon buff that fuels your Blade Flurry.  Can be used as removal or to kill your opponent.

Eviscerate:  Great removal for the early, mid and late game.

Sap:  Sap is an excellent card for gaining tempo and can really set your opponent behind, when you opponent spends their entire turn spending 5 mana on a single minion you will be very glad to have this in your hand.

Bloodmage Thalnos:  Offers great synergy with the rest of the deck due to the amount of spells we have that deal damage.  Also has a great early deathrattle effect that you can copy with Raptor.

Loot Hoarder:  Allows you to cycle through your deck and make decent early trades with your opponent, can also be copied with Raptor.

Fan of Knives:  Also cycles through your deck, and a great way to stop the flood of 1/1 minions that is so ever present in the current meta-game.

Big Game Hunter:  It blows up Dr. Boom.  Move along.

SI:7 Agent:  Solid body and great combo.  Keep in mind that his ability is not a Battlecry, which can have an effect on the game in certain situations.

Piloted Shredder:  One of the best minions to copy with Raptor.

Antique Healbot:  We play one of these just to slow down the onslaught of aggro decks on ladder.

Azure Drake:  Allows you to cycle, gives you a large body, and makes your spells stronger.  I love this card.

Sludge Belcher:  Acts as a huge roadblock for opposing aggro decks, and copying the deathrattle with Raptor isn't half bad.

Sylvanas Windrunner:  One of the best cards to copy with Raptor.

Dr. Boom:  Dr. Seven is hear to stay for a while it seems, even with the introduction of new cards.  Copying a boom bot with a Raptor is really strong.

This deck plays much like other midrange decks in Hearthstone.  You want to establish and early board presence and make trades in the early game and then seal the deal in the late game.  As far as Mulligans go you want to make sure that you have some early minions and no late game cards.  I like to keep Shredder's with this deck if I have The Coin if I am playing against slower decks.  This deck is all about value and trying to cycle through your deck.  You will notice that this deck doesn't have any literal card drawing spells, but most of the cards allow you to make a 2 for 1.

Preparation:  Since we are more minion based than other Rogue decks we don't run this card.  We also don't have Sprint in our deck so it isn't as needed.

Edwin VanCleef:  We don't play as many spells in one single turn as other Rogue decks so he isn't as easy to abuse.

Violet Teacher:  See the above explanation for Van Cleef.

OTHER BUILDS OF THE DECK:

There have been so more aggressive version of this deck seeing play on ladder that run Leper Gnome and the like, but I am fairly pleased with the performance of this deck so I am sticking with a more mid-range build.  I am also a little burnt out on playing Aggro at the moment because the last few seasons I have played lots of Face Hunter and Aggro Druid.

This deck is very new so I will be making changes to it over the next couple of weeks and I'm also going to be interested in trying out Tomb Pillager when he is released.  It's possible that one of the Belcher's could up being a Pillager, but we will have to see because Belcher plays a pretty pivotal role in this deck.  If you want to see newer builds of the deck as they develop be sure to check out my stream and follow me on Twitter.  I will try to answer any questions you have about the deck or about the game in general.  I am always here to help.