Hello everyone! I'm Darkshadow. You may remember me from my Aggro Egg Druid. I'm going to present you the deck i used to finish top 100 on EU.

I build this deck together with SensoR, who came up with a interesting approach to zoo. We improved the deck from early in the season until the last day.

Ideas behind the deck

Soulfire: dealing 4 damage without sacrificing anything on the board is really good in a fast meta as it allows you to keep or establish board control while dealing with your opponents threat.

Wrathguard is just a 4-3 for 2 mana it snowballs really hard if left unanswered and enables good trades. Health doesnt matter as long as you are ahead so this deck negates the downside of the card.

Lance Carrier acts like 2 extra copies of Abusive Sergeant which is one of the best cards in fast/aggro decks. A problem with abusive is that its quite weak on turn 2 if you want to trade with it also it dies to whirlwind effects. Lance carrier doesnt have those problems also lance carrier gives a permanent buff so it enables good damage over turns and has great synergy with sticky minions. Overall its a great card to beat midrange and control decks but it can fall short vs aggro decks.

Young Priestess takes the spot of Possessed Villager due to the lack of Power Overwhelming in this deck it enables great openings and usally wins the game vs fast decks if it sticks more than 1 turn. 2 attack is nice because it creates nice pressure and good trades.

Argent Horserider enables nice trades and is good at any point of the game it has good synergy with Dire Wolf Alpha, Lance Carrier, Abusive Sergeant.

Argent Commander is the most clunky card in this deck. It acts like a third copy of Doomguard. It's in the deck to keep up with the value of midrange/control decks (mainly warrior). It can be replaced with Dark Iron Dwarf if you mostly play vs fast decks.

Cards you keep vs Aggro:

When to keep Imp Gang Boss:

When to keep Lance Carrier:

Why no Leeroy Jenkins?

This deck deals steady damage throughout the game. You try to avoid the usage of your heropower on early turns which works well with the discard cards. On later turns  you want immediately play every card that you topdeck. If a card is situational and gets stuck in your hand you will not only lose tempo but also discard it. Also this deck doesn't use Power Overwhelming so you can't burst that much with Leeroy Jenkins. 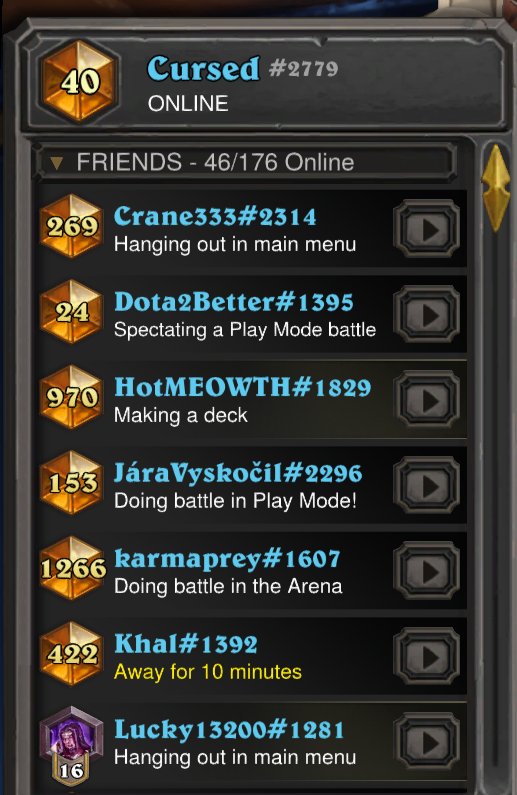 This is the warlock deck Xixo used it in his line-up at SL i-League StarSeries S2 Finals. He ended up winning the tournament.

Shoutouts to Картошечка for making a guide about the deck in russian you can find it here.