Hello, some of you might know me for my recent Beast Druid deck - http://www.hearthpwn.com/decks/467677-enter-beastmode-saranjivacs-beast-druid-deck
I have been toying around with the deck, playing Violet Teachers, and double Druid of the Fang and had a very nice 14-5 run on rank 4-5, then I decided to check what cards the deck was going to lose and decide how to replace them.

UPDATE: Played the deck today and went 12-2 from rank 4200 to 750 legend! The deck seems very strong in this meta but it needs to be tested further. It seems to outpace the C'thun decks (unless they get perfect curve) and can be faster then face shaman so the winrate so far is amazing (only 14 game sample tho).

EDITS:
Because of the recently announced nerfs to some cards decided to go with:
-2x Ancient of Lore +1x Forbidden Ancient +1x Fandral Staghelm I think the Forbidden Ancient might be great to fill out the curve, and if you draw it late game it makes a big threat which this deck kind of lacks. If we do end up needing more card draw I will probably go for either Azure Drakes or Loot Hoarders or 1 of each. Fandral Staghelm is just an amazing card for this deck with so many choose cards.
-1x Keeper of the Grove +1x Addled Grizzly
+1x Savage Combatant It is back in, as a 1 of for now, since I don't really see it as a true 4 drop.
-1x Forbidden Ancient +1x Mire Keeper

GENERAL GAMEPLAY:
You want to start with early board pressure if possible, don't try to fish for combo-es just play them as they come. In your starting hand you want Innervate, Living Roots, Darnassus aspirant, druid of the saber, even power of the wild if you have no other 2 drops. You want to keep 3 drops if you have innervate in hand (except Addled Grizzly) which is more of a combo card then a 3 drop. Don't try to keep Fandral staghelm even with innervate it is often not worth it. Only time you might consider it is if you have coin+innervate, then you can keep one of your 4 drops and just play from the topdeck as you gain insane tempo and almost all your cards synergise with your 4 drops.

If you don't have any good trades on board and they played a big taunt you can't deal with, just don't attack with anything and hope for a savage roar, it is your best chance since trading in your entire board into their taunters will leave you top decking and this deck does not have much card draw and is all about synergy and finishing the game between turn 5 and 8 usually.

I hope that helps.

No longer just a theorycrafted deck now it is a real deck and seems very good in this fresh meta! 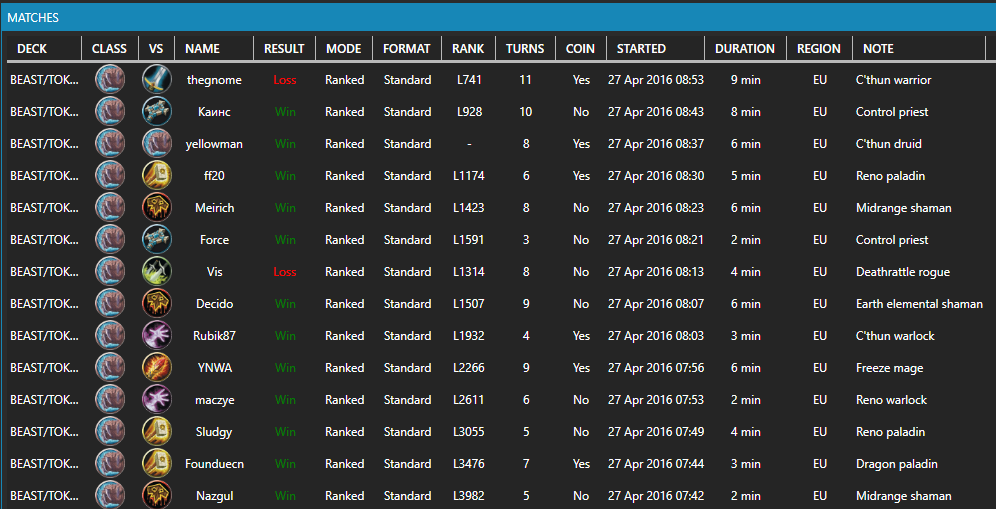 Any feedback is much appreciated, so be sure to post your ideas in the comment section below!

P.S. Also to note is that this deck is cheap to craft! (Final price will depend on the final version)