Are you tired of Face and HL Hunter? Want something fresh and fun?  Maxima

Did Hunter get a new legendary that hasn't seen much play at all?  Maxima

Do you want to shoot fatty McDragons at your enemies?  Maxima

How about 8 damage donking your opponent multiple times with Badonkatonk? Maxima 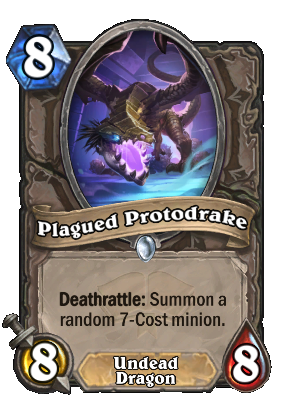 This is a control-focused deck that relies on summoning and re-proccing powerful deathrattles from Darkmoon Tonk and Plagued Protodrake (mostly Tonk to deal face damage).  The goal is to get get big deathrattles out early through Oblivitron and Maxima Blastenheimer when possible, then use Nine Lives for cheap pressure and damage to close the game alongside flexible damage cards (Rapid Fire, Arcane Shot, Corrosive Breath). Jewel of N'Zoth is important for the control matchups.

2x Crescents weren't feeling helpful- we are very low on minions to begin with and I found myself just replacing it with Rinling's Rifle most of the time, but it does have its uses.  2 flex damage for removal or face (or killing our own minions) could be more useful.

Although you can apparently make it to Legend with this deck (see comment section user WoodcuttingLVL99), I wouldn't recommend crafting it if you don't have Maxima and Oblivitron already.  For climbing faster, you may want to go with HL Hunter.  I've played 100+ games with the deck, though mostly casual, and see about 68% WR.  This number will definitely go down if I switched to Ranked exclusively.

That being said, this deck is really fun and can be very effective with creative burst lethals- killing off your own Tonk with Corrosive Breath, Trueaim Crescent, or Marked Shot can do a ton of face damage, especially paired with Nine Lives.  Wish I had a video to post here but this guide will have to do for now.

Guide Update 1/9: I haven't had the chance to play as much as before but I don't feel the need to alter the list at this time but happy to entertain change suggestions if you've got em! If you're struggling please use my recommendations in the guide for nonessential/subs or go with a more meta hunter deck as the list does have some pretty bad matchups and I really just enjoyed playing it for fun and appreciate the support :)

If you can, keep 1 Darkmoon Tonk or Oblivitron

We have to survive until we can, ideally, cheat out some big boys.  Carrion Studies is a great way to cheapen Oblivitron so you can get it out as early as Turn 3 with Coin if you have 2 studies (this would be the nuts draw though).  I recommended keeping 1 Tonk in hand in the mulligan in case you draw Oblivitron or sometimes Maxima summons Oblivitron and you want to have one tonk in hand just in case.

The studies can also find other mechs to go with Oblivitron like Claw Machine and Safeguard.  Fishy Flyer isn't bad in a pinch and Bad Luck Albatross is awesome against highlander.

Once Maxima or Oblivitron summons a Tonk or Drake, use Nine Lives for more tonks/tron procs.  If you have a Tonk in hand, take another Oblivitron off of Nine Lives and it may summon both the tron and the tonk at once.  Using Nine Lives for 8 face damage if the opponent has no board is great burst.  Maxima can also give lethal over taunts.

Playing Plagued Protodrake from hand isn't really what we want to do unless we have to but is very sticky if you have the freedom to play it.  Ideally Maxima will blast one at the enemy face and leave you with something good behind.  You can highroll Winged Guardian, Archmage Antonidas, Arch-Villain Rafaam, Cursed Vagrant, Priestess of Fury, Marsh Hydra, Evasive Drakonid, Skeletal Dragon, or even another Darkmoon Tonk!

Jewel of N'Zoth is your late game finisher if your other summons didn't do the job or were cleared.  1 is enough, 2 was too clunky.

Hunter is really not meant to be a heavy control class but we're not trying to play a long game here, just long enough to get our win conditions going.  Explosive Trap is the only decent AOE hunter has and can be critical against Evolve Shaman if they have to attack your face to activate the weapon as it will clear most of their boards.  Any time you can use it to take out 2 or more minions it's worth it to save your face.

Against control or large minions like Edwin VanCleef or Questing Adventurer, Deadly Shot and Hunter's Mark shine.  Sometimes need RNG for Deadly Shot but it's not RNG if there's only 1 minion left.  Hunter's Mark has been nerfed twice but I think it can be very useful to set a minion to 1 before using Explosive Trap or hitting it with Rapid Fire.  Arcane Shot and Corrosive Breath (alongside Rapid Fire) are flexible and can be used for spot removal or lethal damage as you sometimes have a drake sitting in hand.

Marked Shot is good for value and removal as you work to survive into the mid game.  Try to not use it on baby minions unless you have to.  Much of the deck is spells, so you're bound to find something useful most of the time, be it damage or another Nine Lives, Tracking, etc.  Rinling's Rifle is just straight good, giving you the secrets you need to stay alive- Misdirection, more Explosive Traps, Freezing Trap, Snipe, Pressure Plate as the best options.

Don't forget that you can kill your own minions with the flex damage as part of a lethal play.

Trueaim Crescent was too much at 2x but I didn't want to completely remove it as it can be useful in clearing small minions, even at the cost of face damage.  It can take a 3 health minion to 2 to be killed by Explosive Trap or give your Oblivitron/Tonk rush to kill it off after pushing face damage as well since they can attack twice.

Tracking is more critical than I think it gets credit for.  Hunter lacks card draw, so we're relying quite often on the topdeck, using hero power, to build up a hand.  Tracking gets us our combo pieces and makes our topdecks better by thinning the deck.  There are a lot of cards you won't be so sad to miss if you can pull a Maxima or Oblivitron on curve.

Animal Companion is a solid spell. Not really too great to get Leokk but Huffer and Misha are pretty good to help clear or protect.

I'd recommend subbing the secret based build that was suggested before (Petting Zoo, Pack Tactics, Freezing Trap). I saw Regis playing a list today that ran 6 secrets and played it myself and it felt better in the earlier game!   You might consider playing his midrange variant if this version is too slow.  It's probably better against current ladder.

I've also considered 1x Ursatron to help draw the mechs but it'd ruin Maxima if you didn't mulligan it or draw it 1st sometimes. Could be worth a try but I feel that aggressive Tracking and keeping Tonk or Oblivitron in the mulligan gets the job done.

Looking for suggestions and constructive comments, please!  Deck can struggle vs. aggro but has its moments. Evolve Shaman please die quickly.  Have a great day everyone.