The Deck has been updated with GvG but I wouldn't recommend it since the Undertaker nerf. I'm keeping it as an archive ;)

The Deck was kinda revived with the release of League of Explorers : Deadly Zoo

Hello everyone I'm Spark, Legend player from Hearthstone and today I'm presenting you my update on my good old Tempo Rogue Deck with the release of Naxxramas.

The deck focuses a lot on valuable deathrattle minions which will lead to tempo or card advantage. It is especially centered around deathrattle that gives you another minion when they die so it gives the deck a really strong stickness power.
The deck is now a little bit more Control oriented with some annoying Legendaries or stronger drops overall and it fits perfectly with the current meta since we are seeing less and less finish burst and the games tend to be slower and more focused on value.

What does Naxxramas bring to it ?

Undertaker is the perfect one drop for this deck. It can give you a turn 1, a combo starter or be used later in the game followed by a couple of deathrattle minions to power it up instantly. this little guy has not to be underestimated ;)

I cut off some situational cards to give more consistency to the deck and play the new deathrattle minions that fits the curve pretty well : Haunted Creeper and Sludge Belcher.
The first is really appreciable to ensure some minions on the board just like the good old Harvest Golem, Defender of Argus has now an easier time finding some targets.
The second one often generates a lot of tempo and bring some more taunt to the deck to prevent aggression.

Baron Rivendare has some interesting interaction with the deck as you'll be very happy to draw 2 cards with Loot Hoarder or Bloodmage Thalnos. It is also insanely strong with Cairne Bloodhoof and Sylvanas Windrunner which are coming back into the list for obvious synergies and superb value overall. They replace perfectly Argent Commander from my older deck as the card felt a little bit lackluster to me in the current meta.

Loatheb is pretty standard nowadays as it prevents your opponent from board clears or finishing combos. A strong tempo card overall so it's a must have for the deck.
Besides that, I'm still running Azure Drake to keep up on card advantage and help the spells reach the damage needed when necessary and The Black Knight for strong tempo swing against many match ups, especially in the current meta where every decks possess some form of taunts.

You really wants to mulligan for your early plays : Undertaker, Haunted Creeper, Loot Hoarder, Harvest Golem, Backstab, Deadly Poison and SI:7 Agent (especially if you have the coin).
Those cards will allow you to get to the mid game safely while controlling the board or applying slight pressure, depending on the match up, and then go for your strong end game plays.

Always be very careful on how you use your resources, playing Rogue is a matter of precision and understanding of what you are facing. You really need to plan you next turns so you don't mess up with an SI:7 Agent combo, a well timed Blade Flurry or an empowered Eviscerate.

As I updated the Deck with GvG and feel like it's in a pretty good state right now, I'll probably keep playing it and post some interesting games on my Youtube Channel ;)

Here is one against Handlock (which is normally a very tough match up), don't hesitate to subscribe for more ! 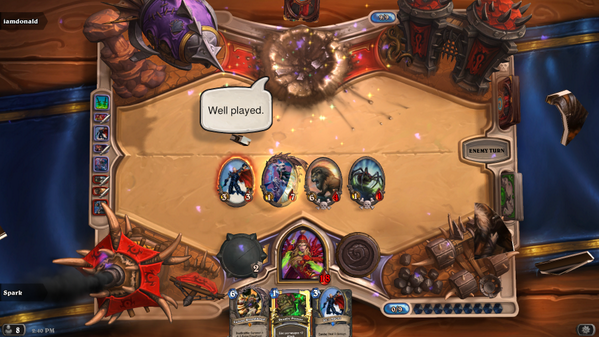 I'm currently playing it with amazing success at rank 2 (I wanted to ladder with my Hunter only but the deck is just too exciting) and its versatility allow you to adapt to many match ups. Beating Zoo is generally pretty easy if you can have a decent start but will sometimes depend on a nice Deadly Poison into Blade Flurry to get the edge in the mid game. The other popular deck of the moment, Mid Range Hunter, is also a favorable match up as I'm currently 5-0 against it.