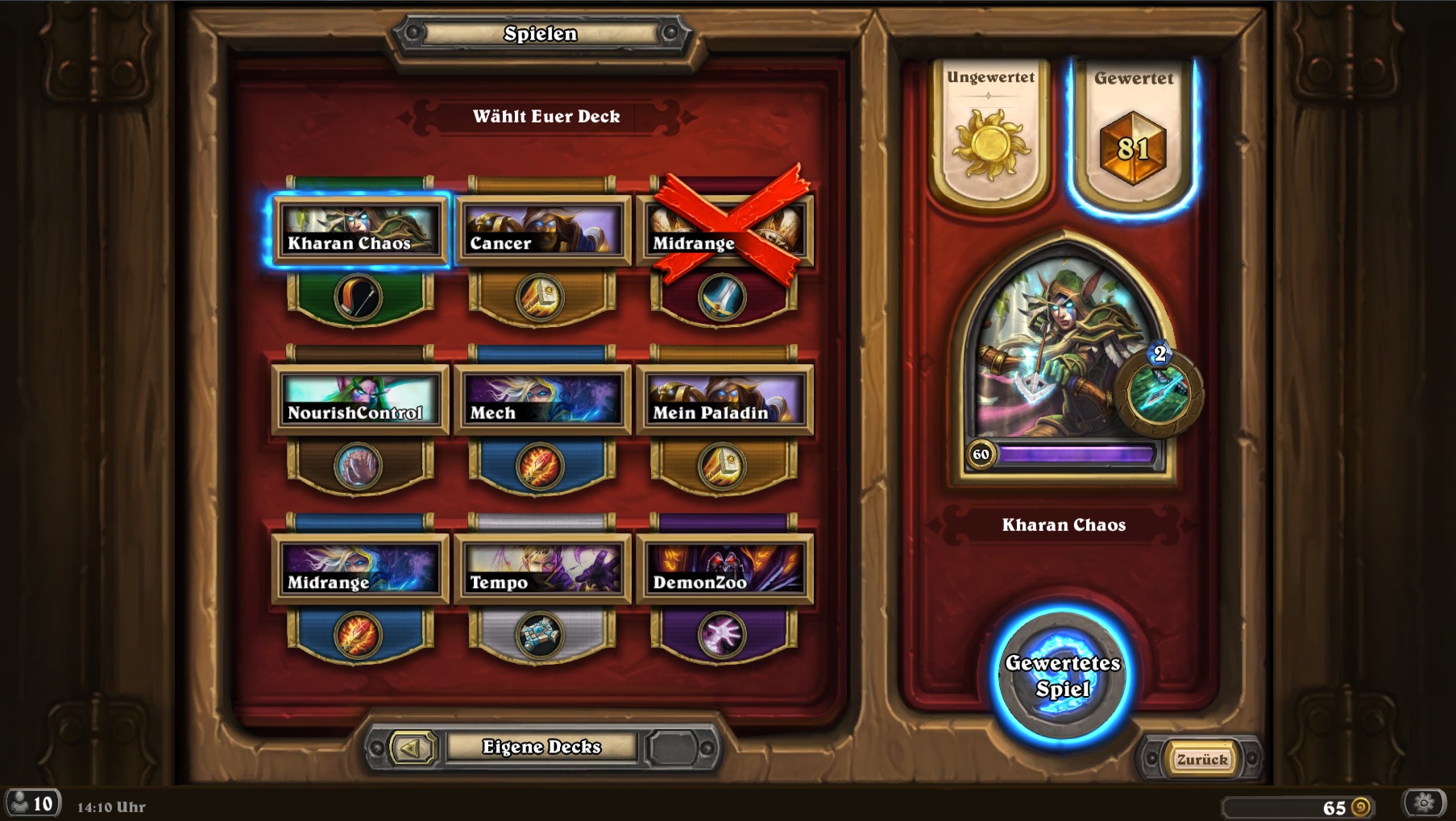 Many of you asked for an update so altough I didnt have that much time to play in the last months I tried to reach Top100 again and managed to do it a few days ago with these changes:

I tried many cards but had by far the most success with these changes.

- 1x Quickshot: 2x QS were too many. I often had both at the end left on hand and one was always useless because I couldnt draw a card from it. I also hate putting two of the same card in a deck because they limit the possible choice.

+  Ragnaros: I often put him in when it was possible to play another late game card without dying to aggro. It's a fast and responsive card witch can win a game by its own and fits in really good right now.

- 2x Shredder/Senjin & + 2x Loot Hoarder: Shredders/Senjins were the main reason why the deck got weaker in the last seasons. These cards are good for a midrange playstyle but have no benefits to a control deck. With two additional Loot Hoarders you have more than enough possible plays before turn five to survive and gain card advantage.

I played this Deck a long time with 2x Novice Engineer and 2x Flare before both got nerfed and I really missed the draw power/deck thinning they provided. Loot Hoarder helps to fill this gap and also is useful to survive the early game and to get important cards faster.

There are also now tutorials and explanations about this deck available:

I also hope to get a better internet connection soon so i can finally stream this deck again. ( http://www.twitch.tv/teamoverrated_kharan )

Thanks everyone for the great support! 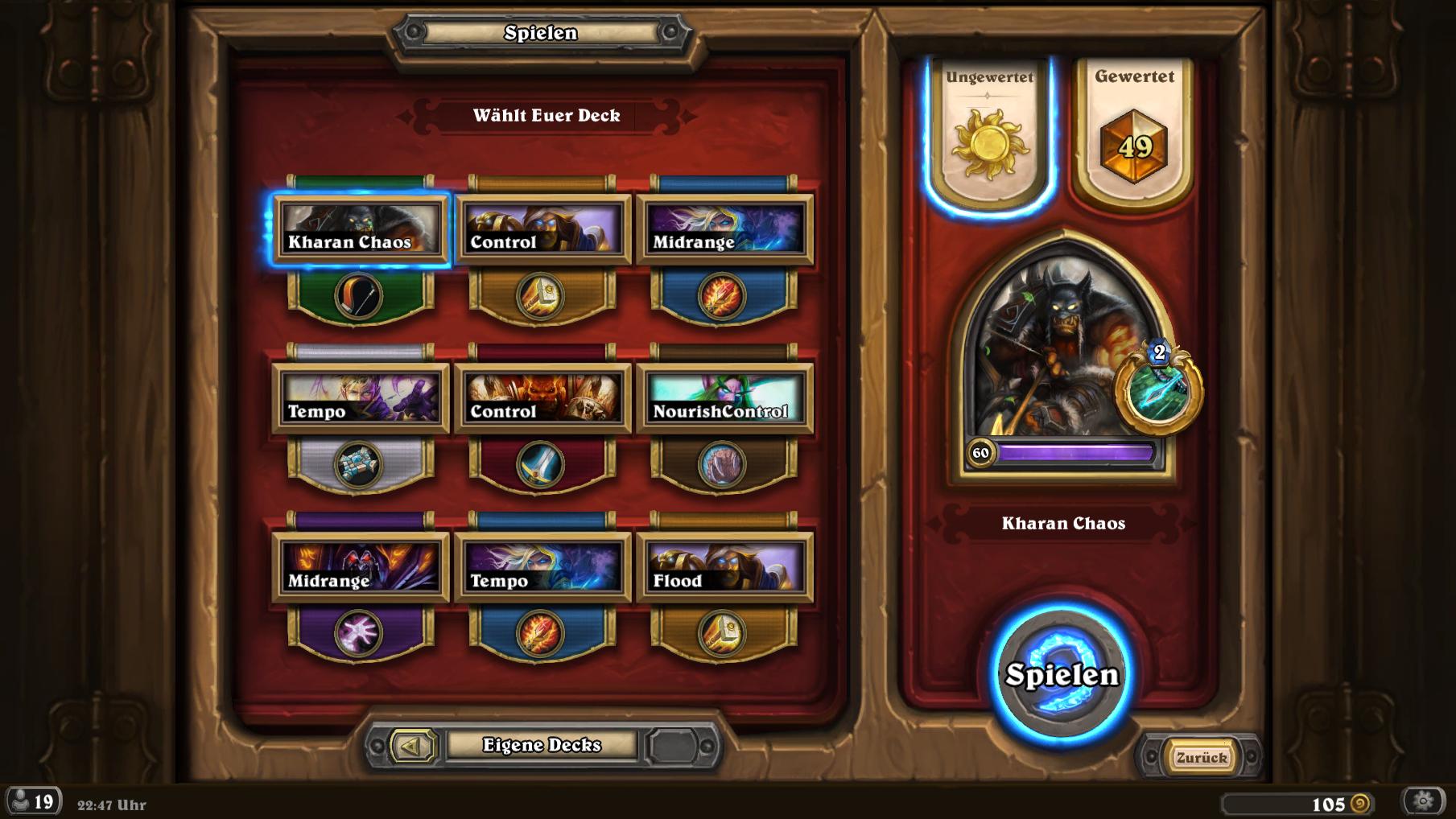 Maybe you remember my older versions of this deck. Since closed Beta (even before that, in Cockatrice) I mainly played control hunter and reached legend quite often with it.

With the new Blackrock additions (Quick Shot/Emperor) it hits harder than ever before and after hitting Legend Top50 I got a lot of requests for the Decklist, so here it is.

As you can see I don't play any Beasts. Well except for King Krush!

The main problem of a controlly approach at Hunter is the card draw. Thats why you need high value cards and (my favorite card in the game) Acolyte of Pain. Hunter works really good with acolyte because of the Pyromancer/Hunter Mark combo. This synergy is the core of this deck and you have to use it wisely.

You play this deck passively. In general you mulligan for Tracking/Acolyte/Bow/Sniper and control the board.

Use the hero ability as often as you can, your main damage consists of bow hits + Steady Shot + King Krush to end the game.

If I'm facing more Control Decks I play Deadly Shot, 2x Shredder and if I'm facing a lot of aggro I switch to Earthern Ring Farseer and 2x Sen Jin instead.

Explosive Shot is really strong in this meta right now, cause it kills 2-3 minions most of the time. (Belcher / Loatheb / Emperor + 1-2 small minions for example) Sometimes I even play it 2x.

Krush also works really good now because of emperor. You can deal 13 damage in turn 10 (Bow / Krush / Hero Ability) from hand if you played emperor before and reduced krush to 8 mana. I prefer him to leeroy because you don't necessarily have to use him to end the game.

I don't want to go into too much detail and explain every card for now. Every card has a reason, just ask if you want to know why or how I use certain cards.

Because the deck is pretty diverse it does good in every matchup. I think control warrior is the hardest to play.

I guess most people only played Face or Midrange Hunter and it could be hard to adapt to this passive playstyle. You are always defending/clearing the board and don't push for minion/face dmg.

If there is great demand, I will play this deck on stream. ( http://www.twitch.tv/teamoverrated_kharan )