In a tweet early this morning, Hamilton Chu responded to Ben Brode's leaving tweet with something very simple. Both of the ex-Hearthstone team members have set their Twitter bios to "Starting up something new!". 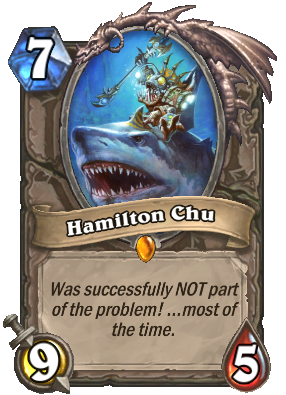 Today is my last day at Blizzard. 😢 Thank you for all the laughter and fun we shared. I will miss you.

Not many were aware of Hamilton's involvement with Team 5 as he wasn't out there interacting with the community like Ben. Things he was responsible for though were writing most of the flavor text in Whispers of the Old Gods expansion and the strategic planning and business operations on the Hearthstone side of things. He also headlined Blizzard's strategic Initiatives Group which included business ops for World of Warcraft. It would appear that this isn't only a blow to Hearthstone, but also other areas at Blizzard.

As executive producer for Blizzard Entertainment's Hearthstone: Heroes of Warcraft, Hamilton Chu provides the leadership and direction necessary to deliver players a Blizzard-quality gaming experience. In his role, Chu is responsible for strategic planning and business operations, providing management support for the development leadership, and generally tanking issues for the team whenever necessary.

As head of Blizzard’s strategic initiatives group, his other duties include leading business operations for World of Warcraft and managing Blizzard’s creative development department. Before joining Blizzard Entertainment, Chu served as a producer on Halo and Halo 2 for Bungie before going on to sell his soul to the MBA gods.

In his spare time, Chu enjoys reading comics, writing stories, and pwning noobs of all shapes and sizes.

Which beloved developer is leaving the Hearthstone team next to work alongside Brode and Chu?