Hello! This is my deck that I used to climb to rank 45 Legend this season with a 68% win-rate from Rank 5 to Legend. The deck is a hybrid build between a Mid-range Secret Hunter and a Face Secret Hunter. I have found is very effective against the meta as it does well against Shamans (65% win-rate) because of the aggression, but also well against slower decks like Control Warrior (100% win-rate) and Malygos Druid (~80% win-rate) because of the inclusion of Barnes and Savannah Highmane.

Astounding! Over 100k views - thank you so much everyone for the support. I really hope you enjoy climbing the ladder with this deck!

I have written a guide to explain some of the match-ups. If there is anything I can do to improve my guide, I would love the feedback. 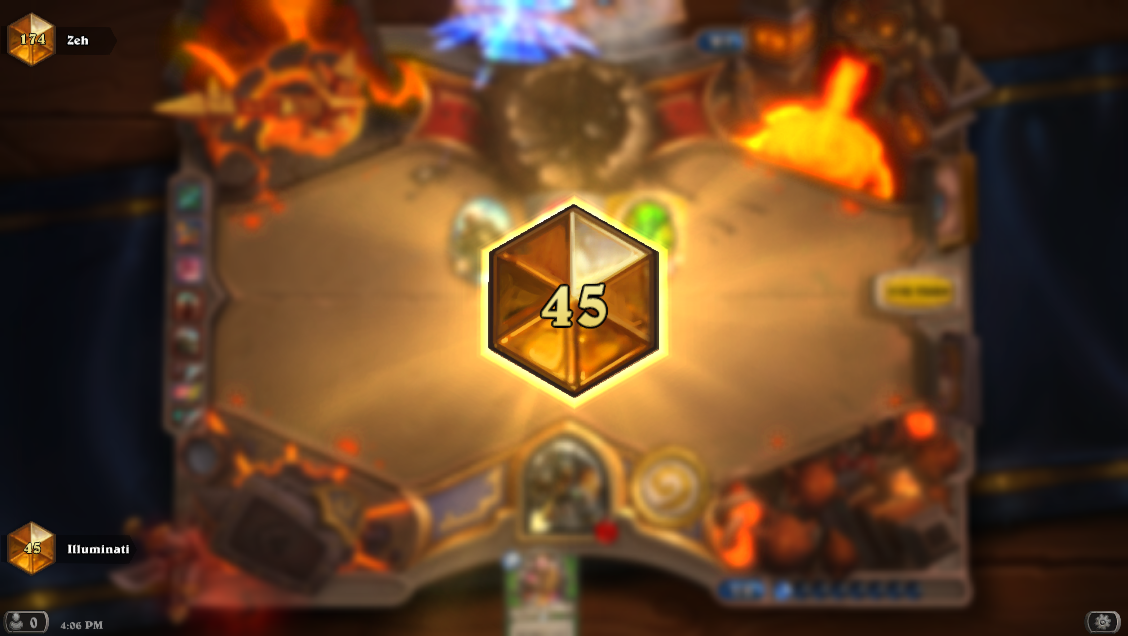 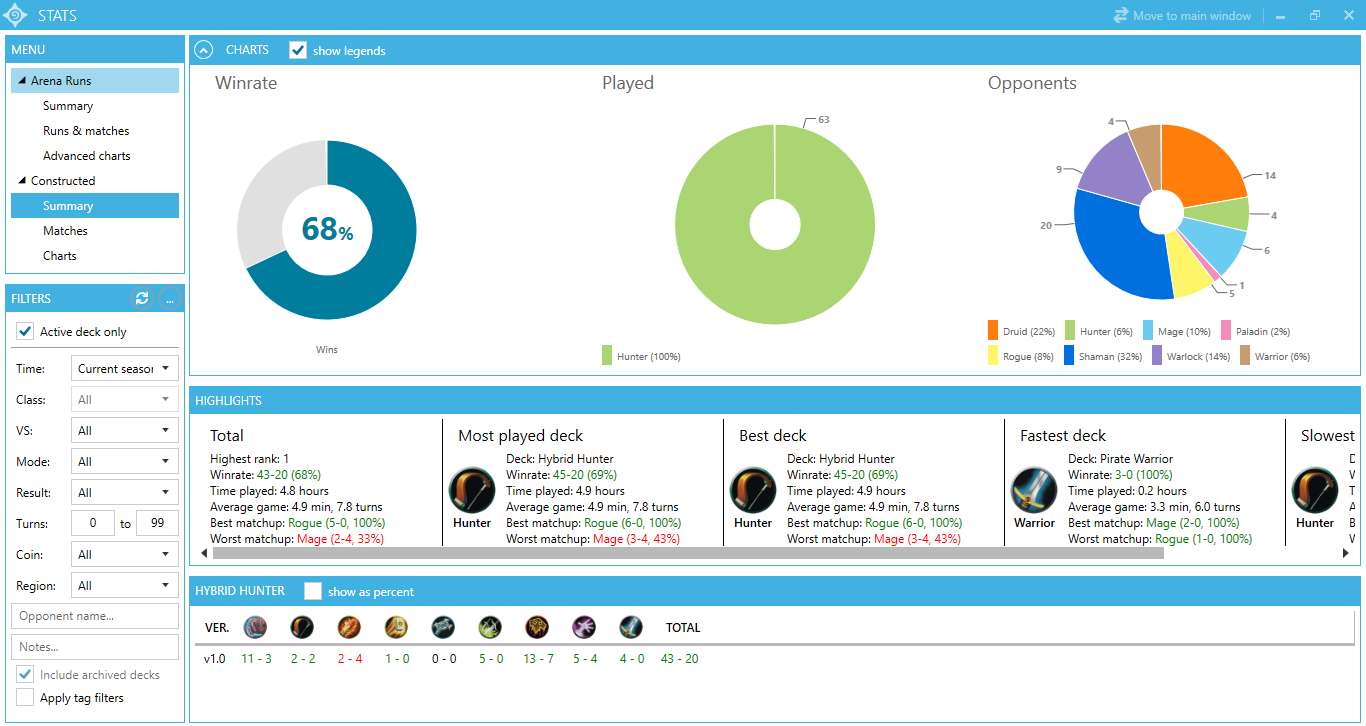 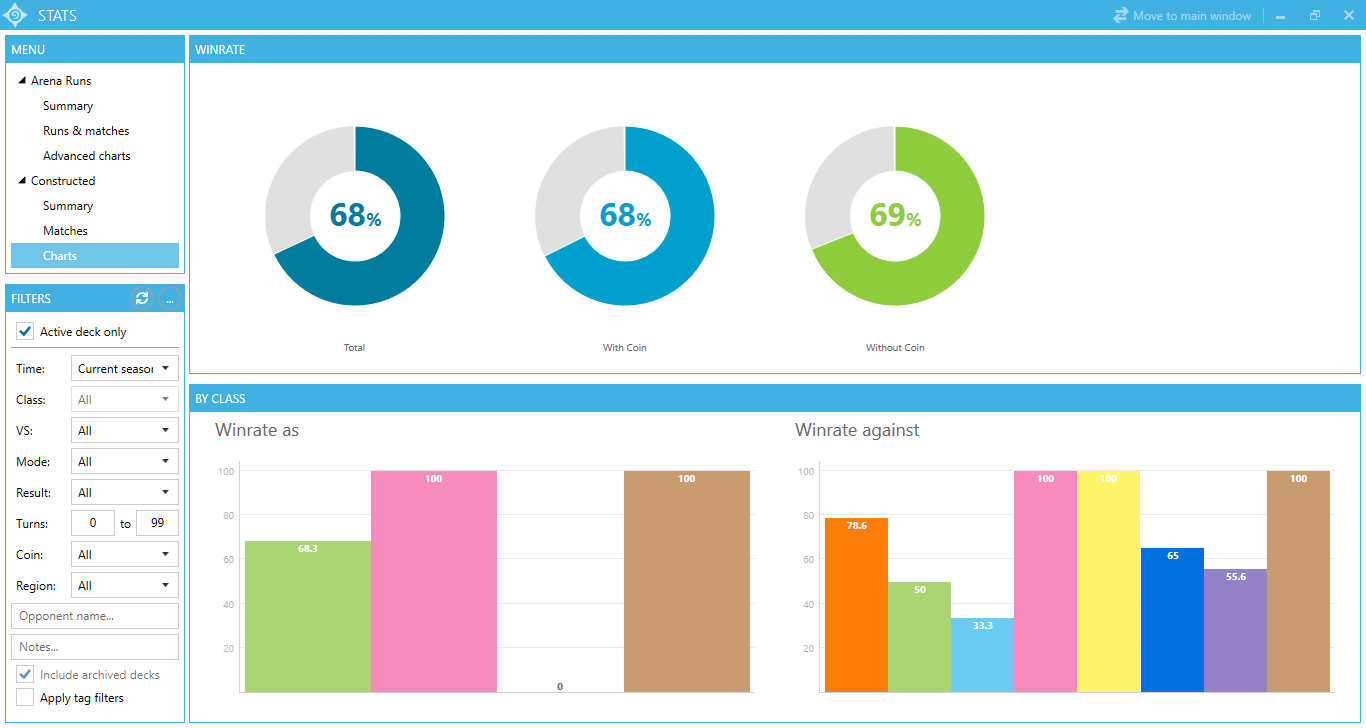 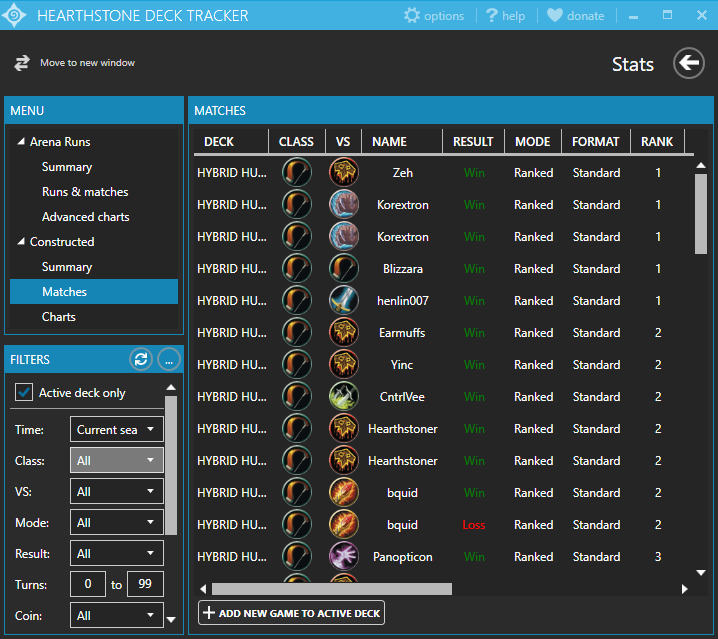 In general, you will want to fight for the board early and gain a huge tempo swing on turn 3 or 2 with Cloaked Huntress and a Secretkeeper on board. Make good trades early on, then in the mid-game, switch to full on face mode and burst them down with Quick Shot, Kill Command, Unleash + Leeroy, etc. Make sure to squeeze in your hero power in later turns until you are ready to finish them off.

This is actually a pretty good match-up. Mulligan for Secretkeeper, Kindly Grandmother, Freezing Trap, and Cloaked Huntress. If you have a good hand, sometimes a Quick Shot is a good keep to kill their Tunnel Trogg if you go first.

In the mid-game, look to play Secretkeeper, but avoid playing Cat Trick until the opponent has used the coin if you went first, as he will probably coin, Bloodmage, Maelstrom or coin lightning storm later. After the Shaman has used a board clear or two you are good to go. Going second, you can play coin, Huntress, Cat Trick because the opponent will probably use a spell before he can clear your board (Turn 4 earliest with lightning bolt then lightning storm). Around turn 5 or 6 you need to start going face because you WILL lose the board to board clear into 0 mana 5/5. Avoid playing your Highmane unless the opponent has already used a hex, which he likely will not have done.

You can generally ignore the healing totem and 1/1 totem (unless you suspect it is a totem shaman or a flametongue would really hurt your board), but ALWAYS kill the spell damage totem unless you have lethal next turn. You should still make good trades if the opportunity presents itself in the mid-game, but most attacks should go face. Don't be greedy in your trades and try to keep as many 4+ health minions as you can to avoid Lightning Storm. Leeroy + Unleash is a good finish as the opponent will probably have a lot of totems. Don't forget to play around a potential Bloodlust - killing a 1 heath minion could be the difference between victory and defeat.

Malygos Druid is a really good match-up for us. Keep Secretkeeper, Cat Trick, Kindly Grandmother, Cloaked Huntress, and with a good hand Freezing Trap and Animal Companion. Push for face as fast as possible in this match-up - if it goes beyond turn 10 he will overwhelm you with 0 mana 8/8s and 16 life gain (Feral Rage).

Cat trick is and excellent turn 2 play as the opponent will probably Wild Growth, giving you a 2 mana 4/2. He will try to remove your minions with Living Roots, Wrath, Swipe, etc., so just try to kill him as fast as possible. Always kill Fandral, Azure Drake and Emperor, and try to play around Swipe. He might get insanely lucky with his innervates and there is nothing you can do about that.

Control is a very good Match-up for us, but Pirate not so much. Mulligan for Secretkeeper, Kindly Grandmother, Cat Trick, Cloaked Huntress, Animal Companion, and if you suspect control warrior, Savannah Highmane, as it is very hard for a warrior to remove is entirely on turn 6. Control is another race to the face match-up. Kill them before they can get their insane 4 armor per turn with Justicar. Don't play too many minions at once, but if it is turn 5 and you have a couple deathrattle minions that will leave stuff behind, then you can continue to flood the board. avoid popping these deathrattles to guard against brawl.

Against Pirate Warrior, just hope that they don't Upgrade their Arcanite. Race them for face damage, and make trades that will limit their damage output while not hurting yours too much. Avoid taking too much damage with your Eaglehorn Bow.

Against Dragon Warrior, just fight for tempo. Do your best not to fall behind on the board and get a good cloaked huntress to swing the game in your favor.

Tempo mage is a tough match-up, as they can sit there and avoid your Explosive Trap to burst you down with spells/Flamewaker. Keep Secretkeeper, Kindly Grandmother, Cloaked Huntress, Eaglehorn Bow, and Quick Shot. Fight for the board in the early-game, and ALWAYS remove Sorcerers Apprentice, Flamewaker, and the 3/2 spell damage one. An explosive trap can be good to remove the 3/2s if they decide to attack, but a lot of the time they wont, so you'll have to be ready to remove them yourself. Either win the board and kill them quickly, or kill their threats and out-value them as they run out of cards (which they tend to do).

Against Freeze Mage, just go face and save your spells til lethal. Don't run your resources too low, because if you run out of cards after you pop their ice block and you have no board, Alextraza can heal them and put an 8/8 on the board. Pretty easy match though, just be aggressive.

Race to the face. Keep Secretkeeper, Kindly, Huntress, and Freezing, Cat, and Bow if you have a good hand. They will probably be a secret hunter, so play around their traps, checking one by one. If you suspect Cat Trick, avoid casting spells until you know you can handle a 4/2 on the board. Your goal is just to kill them faster than they kill you, so in the mid-game, most everything must go face.

Zoo is a really bad match-up, Renolock is good. Always keep explosive, and the usual SK, KG, and CH, but also Unleash if you have a good hand but do not have explosive. Try not to let Zoo take the board - they will overwhelm you quickly with Councilmen, Doomguards, and Defender of Arguses.

Try your best to fight for the board and make good trades. Watch out for soulfire and Doomguard. Always kill Malchezaars Imp and Darkshire Councilman. You can afford to use your freezing trap liberally because finding a good target will often be very difficult with their plethora of 1/1s. Use explosive trap to clear as much as possible, but don't be too greedy - 3 minions is plenty usually. Also watch out for Defender of Argus, who can raise two minion's health above 2 to play around Explosive Trap, so try to set threats to 1 health. Go face after turn 5ish because you cannot hope to control the board most of the time.

Against Renolock, burst them down and hope they don't have Reno. Sometimes you can get a turn 5 lethal before they can even play reno.

Free win. Keep the usual SK, KG, CH, and also Quick Shot, Eaglehorn Bow, Cat Trick and Freezing Trap. Kill them quickly, use a freezing trap on Tomb Pillager or Azure Drake, kill SI7 with Quick or Bow. Avoid playing Highmane if you can because Sap is such a strong tool against it. Rogues are beginning to cut Sap, but better safe than sorry for now. Watch out for turn 2 8/8 Edwin (which I faced 3 times on my climb) and hope for a freezing trap.

Mostly Anyfin Pallys. Normal mulligan SK, KG, CH, Cat Trick, Animal Companion. Don't overextend because they will clear your board with Equality + Pyromancer, but try to kill them quickly. They have a lot of healing with Forbidden Healing and Ivory Knight, which can make the match tricky. Just try to kill them before they can heal.

LUL Priest. Probably Resurrect or Dragon. Against Resurrect, get Freezing Trap to shut down Injured Blademaster + Resurrect, and kill Priest of the Feast ASAP, otherwise they will heal 6+ virtually every turn. Another one just to kill fast.

I do not have any personal experience against Dragon Priest, but I have been informed that it is a bad matchup. I would mulligan for the usual cards, as well as Freezing Trap. They will try to play on curve, so try to get the biggest tempo swing you can out of your Cloaked Huntress and never look back.

Snipe is a card that is too easy to play around for most classes. Shamans and Rogues will drop Thalnos to gain card advantage, while Druid will drop 0 mana 8/8s and Ragnaros, also gaining them card advantage. It doesn't do direct damage so it is a worthless late game draw.

Yes. Yes it is. The ability to basically "discover" the perfect card in your deck for your situation and get rid of the cards you no longer need for such a marginal mana cost late in the game is irreplaceable. So many games have been won due to a Tracking topdeck on turn 8+.

At the end of the game, doing damage to face is all that matters, and Leeroy does a really good job of this, especially when paired with Unleash the Hounds. If you want the deck to be optimized, craft Leeroy.

Ragnaros is ultimately too slow for this deck, as most games will be over by about turn 8 anyway, and dealing 8 damage to a random enemy for 8 mana is worse than dealing 13 damage to the opponents face with 2x Kill Command and Quick Shot on turn 8.

Highmane is dropped at a point where you will need to be putting as much damage on board to set up for lethal as possible. Even if the enemy kills it on turn 6, you will probably sill have 2 2/2s left over to deal 4 face damage and the enemy just spent his turn dealing with the Highmane instead of healing or clearing the rest of your board. If he doesn't remove it, that's just 6 more damage to his face the next turn. This is included to beat slower decks like Warrior and Druid. You need to play faster cards against Shaman usually unless you have the board or you have no other options.

Wolfrider is the best replacement card for Quick Shot available to Hunters. Keep in mid that this is very sub-optimal, and will reduce the value of Barnes.

You can sub in a Wolfrider or an Argent Commander for Leeroy if you do not have him. Do NOT under any circumstances use Reckless Rocketeer. The card has horrible stats for its cost - only 5 attack for 6 mana. Wolfrider at least gets a 1:1 Damage/Mana ratio, and Argent Commander gets a divine shield that increases survivability greatly. Argent Commander is also better with Barnes.