You can find me playing this deck in action, among other decks and arena runs, on my Twitch channel.  My moderators and I will try to answer all questions that you have about the deck or anything else Hearthstone related.

Although I spent most of the season playing my budget rush Paladin deck, towards the end of the season I found myself stuck around Rank 4 not being able to make the final push needed to achieve Legend for the season.  This took me back to the drawing board, and after tinkering around with multiple decks in pretty much every class except Priest and Warrior I finally happened to put something together that got me the final wins that I needed. Flamewaker was the proverbial beast that I rode to victory, reaching a peak of 185 Legend. 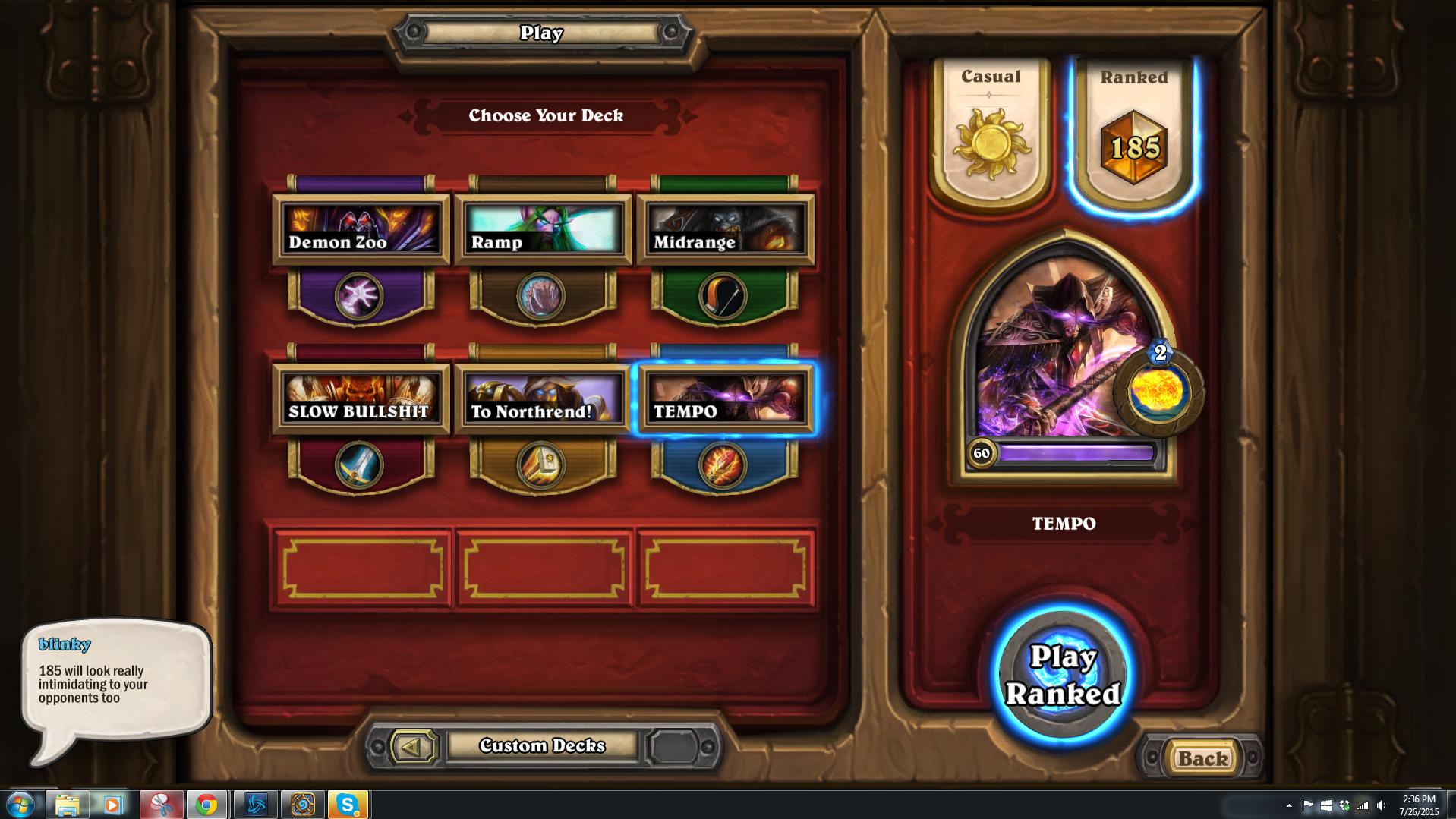 Many of the Tempo Waker decks that have been popular lately have been utilizing spare parts and Archmage Antonidas to seal the deal in the late game, and while I acknowledge that cheap spells coupled with and Archmage can quickly end games, the more I attempted to utilize that strategy the more inconsistent I found it to be.  In this build you will find no cards that make spare parts or Archmage.

Mirror Image:  Used mainly to trigger Flamewaker and slowing down aggro decks.  You can keep this in your hand if you have Mana Wyrm and/or Sorcerer's Apprentice and you should always keep it against aggro decks.

Arcane Missles:  I used to not like this card but with the onslaught of Hunter and Rush Paladin on the NA ladder at the moment it seems pretty necessary (The Paladin problem is partially my fault, I apologize).  A lot of times you will want to hold this card back to use after you have Flamewaker in play.  Flamewaker+Coin+Arcane Missles = 7 points of burst damage.  You should always keep this in your hand against aggro decks but mulligan it against control.

Mana Wyrm:  This card is the best Mage one-drop in the game, and has a tendency to get really huge in this deck.  Works great with your and cheap spells and the fact that it has 3 health means that it outclasses a lot of other early drops.  Always keep this card in your opening hand.

Flamecannon:  Solid cheap removal and has the added bonus of being able to hit stealthed minions.  Keep this in your opening hand if you have the coin, or are expecting to be facing aggro or are expecting to face minions with stealth in the early game.

Frostbolt:  This card should need no introduction.  Keep this card when you have the coin and against aggro decks and against priest so you have an answer for their Northshire Cleric

Unstable Portal:  I've talked about this card extensively in my other mage deck write-ups.  Basically this card is one of the best cards in the game because it is so unpredictable and your opponent cannot play around it.  On average you will get a minion that is just that, average, but since you are netting one mana it makes that minion above average.  More often than not your results from Unstable Portal will be solid.  It also has the added benefit of being a "minion that is actually a spell" so it triggers your Mana Wyrms, Flamewakers.  Keep this card if you have Sorcerer's Apprentice and/or Mana Wyrm.

Sorcerer's Apprentice:  Makes all of your spells that much better.  The amount of value that you get off this card in this deck is pretty crazy considering the amount of cheap spells that you play.  Always keep this card.

Arcane Intellect:  The most important card in the deck in my opinion.  This card really helps you refill your hand while triggering your Flamewaker.  Always mulligan this card.

Mirror Entity:  The best Mage secret.  Forces your opponent to be reactive and let's you dictate the pace of the game.  Always mulligan this card.

Counterspell:  This card is surprisingly good against aggro decks.  Shutting down an Unleash the Hounds or a Blessing of Kings can provide a very huge tempo swing and in many instances prevent you from losing the game then and there.  Always mulligan this card.

Flamewaker:  The deck is built around this guy.  You can go crazy with this guy and cheap spells.  keep in mind that the trigger happens after you cast the spell, and not when you cast the spell.  Most of the time you will want to mulligan this card because it is a little too slow in your opening hand.

Fireball:  It kills your opponents minions, and it kills your opponent.  I shouldn't have to explain to anyone regardless of how little time they have spent with the game.  Always mulligan this card unless you are playing against Druid and you can curve into it perfectly.

Water Elemental:  Right now I like this card more than Piloted Shredder for our 4-drop minion.   There are a lot of weapons in the current meta and this guy does a really good job of making sure those weapons stay in check.  6 health is also nothing to scoff at.  This is probably my favorite card in the deck.  It's fun to play and tough for your opponent to kill.  You can keep this card if you have the coin and are expecting to be facing a slower deck with weapons.

Azure Drake:  Gives the deck more card draw and is a solid body.  We have a lot of direct damage spells in this deck so the +1 spell damage is icing on the cake.  Always mulligan this card.

Sylvanas:  Sylvanas is one of those cards where most of the time her Deathrattle will probably be underwhelming because your opponent played around it, but that's the entire point of playing this card...it HAS to be played around.  While she is not good on an empty board, when she is on a board full of minions she can really change the pace of the game and make your opponent react in a manner that makes them make plays that aren't exactly optimal.  Every once in a while you will also get to steal something huge.  Keep in mind that you can use your burn spells and hero power to kill her to steal something.  Always mulligan this card.

Flamestrike:  This card gets cut from a lot of tempo decks but I feel like it's necessary, it helps keep mid range decks in check and can yield a ton of value.  You pretty much need this card if you expect to clear a board full of Grim Patron and his cohorts  I can't stand Grim Patron.  Let's blow them all up.  Always mulligan this card.

Dr. Boom:  The best 7-drop in the game.  Always mulligan this card.

Ragnaros the Firelord:  Since we aren't playing Archmage in this deck we need another big finisher to bat clean-up for us.  Ragnaros fills this role just fine.  Always mulligan this card.

HOW TO PLAY FLAMEWAKER PROPERLY:

You usually want to mulligan Flamewaker, Unless you have the coin and you are up against an aggro deck and can play Flamewaker on turn 3 and then coin out a cheap spell.  So if you have something like Flamewaker+Coin+Mirror Image or Arcane Missles then you should keep the Flamewaker.  Otherwise just mulligan him because a lot of the time you will not play Flamewaker until the mid-game.  You very rarely want to play him "naked", you want to be able to play him and utilize his ability on the same turn by casting spells on the same turn that you played him.

The key to playing this deck is identify what your role is early in the game.  Some games you will want to go balls to the wall aggro, and some games you will want to be playing more of control role by clearing your opponents board so you can finish the game with your mid to late drops.  This deck can be very proactive or very reactive , it's all about identifying what your opponent is playing and identifying what they are capable of from the get go.

Keeping double Mad Scientist can be a bit of a gamble because sometimes one of your secrets might get stuck in your hand causing one of your scientist's deathrattles to fizzle.  I think that it is worth it to keep two of them in your opening hand but just be aware that it can backfire.

Rush Paladin:  This matchup favors you mostly because their minions are so fragile, it is very easy for your Flamewakers to wreck their board and you have lot's of cheap removal.  The name of the game against aggro paladin is to make sure you are controlling their board very well, You play like a control deck against them.  Counterspell is very good in this matchup because all of their spells are very high impact.  Water Elemental is great against Paladin.

Zoo:  I used to have lot's of trouble against Zoo decks with older versions of Flamewaker decks that I was playing but after adding Flamestrike to the deck the matchup has improved a bit.  It is still a very tough and grindy game but if you can keep their onslaught of minions at bay until you cast a big Flamestrike on Turn 7 you should be able to pull it off.

Hunter:  You are favored against Face Hunter, it is a similar matchup to aggro paladin, it is very easy for you to control them.  Midrange Hunters are more 50/50 though because Highmanes and Shredders can cause you problems.  Water Elemental is great against Hunter.

Rouge:  This matchup is all about getting the leg up on them in the early game so you can kill them before they get a chance to burst damage you out of the game in the late game.  Rushing them really early can be really tempting but at the same time you have to be careful not to wrecked by Blade Flurry.  This game is a bit of cat and mouse with all the removal that they have.  Oh yeah...very few things are as satisfying in Hearthstone as Counterspelling a Sprint.  Water Elemental is great against Rouge.

Druid:  Make sure you keep Flamecannon in your opening hand in this matchup, it's ability to kill a shade straight-up is very powerful.  This matchup is all about getting a fast start and fireballing their big taunts off the table.  Once again Water Elemental is great in this matchup .

Handlock:  This matchup is pretty bad for this deck.  Their drakes are really hard for this deck to deal with because they have so much health and all of their removal can make it difficult for you to get damage through.  Water Elemental is pretty good in this matchup surprisingly just because of the amount of health that it has, and it can also shutdown Jaraxxus in the late game.  More often or not you will yourself on turns 5-7 praying that they don't have an Antique Healbot.

It is important to keep in mind that this deck could change drastically after the release of The Grand Tourney.  I cannot wait to try out Fallen Hero and possibly Effigy in this deck.  Coldarra Drake seems pretty cool but I have a feeling that it will probably be too slow.  While some people don't seem impressed with Efigy, I think that it has lot's of potential.  It almost seems like a "faster" duplicate.  The new expansion is likely to shake things up in a major way much like Goblins vs. Gnomes did, but I highly doubt that this deck will be outdated with the release of the new set, if anything it could be even more powerful.

I would like to personally thank the Hearthpwn.com community for giving me so much positive feedback and taking the time to come check out my Twitch stream.  You guys are awesome, and I wouldn't do this if you guys didn't enjoy these guides so much.  THANK YOU!