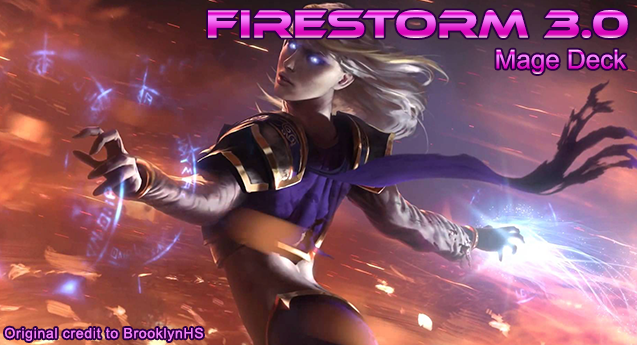 About - Greetings, Zion7 here (formerly known as MarineKingHS) to share an interesting Tempo Mage deck which has been working very well this season. I specialize in high level play on NA server and have obtained #200+ Legend Rank legend many times. I have roughly 5000+ wins in constructed ladder and like to help others improve their game.

This deck is called "Firestorm 3.0" because it is based upon the wildly popular Mage decks Firestorm and Firestorm 2.0 made by BrooklynHS. They were wonderful, fun decks for their time but BrooklynHS had retired (now un-retired) from HearthStone and Firestorm 2.0 was his last work so I will be taking over future development of Firestorm. The credit for the original idea behind this deck goes to him.

Deck Explanation - This deck is designed to win by establishing tempo early to mid-game through the use of high value synergies and unpredictable secret plays. This deck is highly difficult to anticipate and has a wide variety of well rounded tools. This is one of the few Mage decks that features both hard removal and anti-spam AOE. Fireballs and Polymorph can be used to deal with big threats, while the dual Flamestrikes deal with annoyingly large boards. This deck is a very good counter to many of the currently popular strong meta decks like Patron Warrior, Zoo/Demonlock, Mech Mage, Hybrid Hunter and many more. 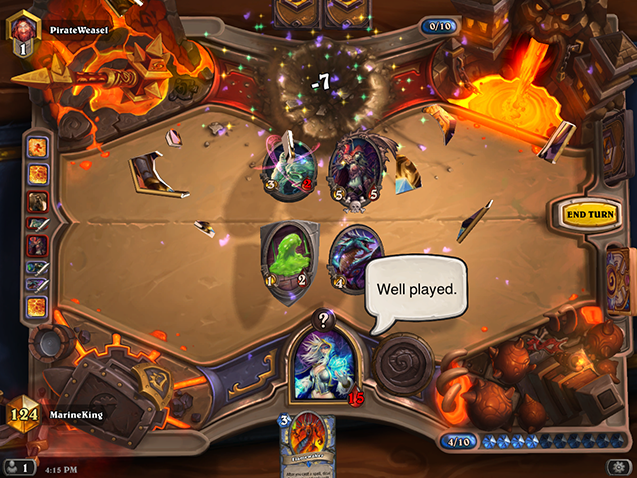 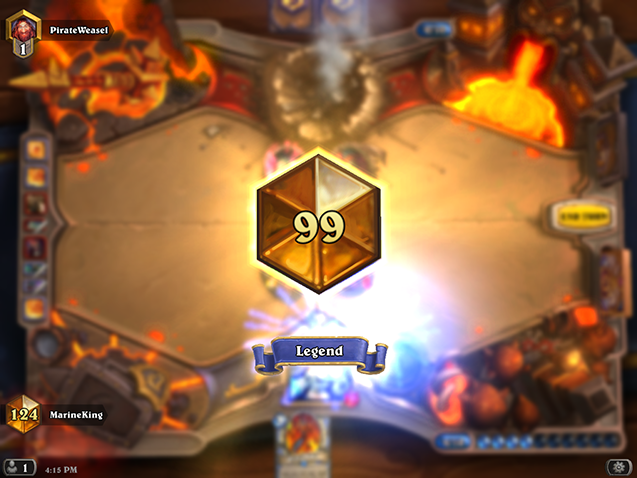 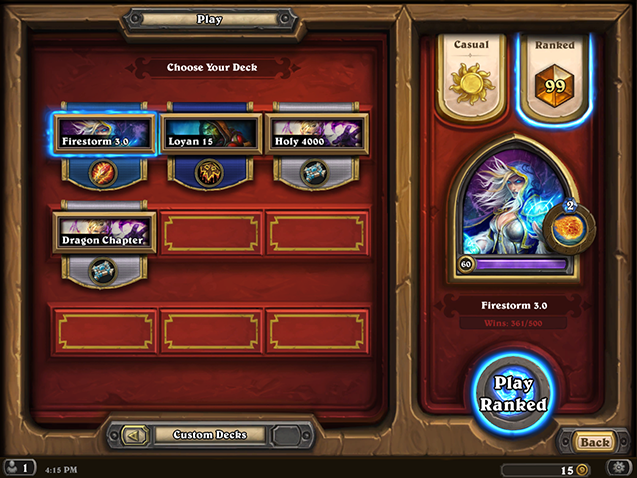 Update: New videos have been added for Season 18. This is a special "never lucky mulligan" ongoing instructional series (this was provided for all the people who say Firestorm 3.0 can only work if you get great opening mulligans) and more vids are coming soon, enjoy.

<-- Below is a video of Firestorm 3.0 submitted by Khristophesaurus -->

Most cards should be fairly obvious, so I'm only going over a couple of cards choices that might seem strange.

Duplicate - This secret hasn't been popular for a long time but it really works nicely in this deck precisely because we run so many different secret. Duplicate gets excellent value from so many cards in the deck including Flamewaker, Shredder, Water Elemental, Blecher and more. But it's also very useful even if it duplicates Kirin Tor Mage, Mad Scientist and Mana Wyrm. In most Mage decks you wouldn't want to duplicate a Mad Scientist or Tor Mage because those decks ran very few secret cards and thus couldn't get value, that is not the issue in this deck though because we run 4 different type of secrets.

Vaporize - This is a RARELY run secret card that has been widely overlooked and ignored. Nobody expects it, which is exactly why it's highly effective in this deck. When you have it in play, just focus on removing any small threats with your spells or hero power and let the enemy kill their big minion or burst minion. Buffing up for one big burst dmg charge has become very popular and this secret practically wins the game if they run into it.

Flamestrike - It's not unusual to see 1 copy of Flamestrike, but few Mage decks run 2x copy of it. This reason we run 2 copies is because this deck is less of an aggro deck and more of a partially "stall" deck. What I mean by that is, this deck already has answers to single large minions, it's only real weakpoint is vs spammy boards. Flamestike is our MVP tools for dealing with that and slowing down the game. Once you draw into your Pyroblast, you can begin setting up lethal. Pyro lethal is easy to do if you can stall the game out long enough to chip away the enemies hp down to 10. Flamestrike helps greatly with that.

Pyroblast - This is another card that used to see play but hasn't been popular in a while. This card really gives you that "reach" to finish the game once the enemy has dropped below about 15hp. Basically you want to control the board early and once you draw Pyro, start preparing to nuke the enemy on turn 10. It's pretty easy to set up once you get the hang of knowing what to do with your fireballs and icebolts, depending on the situation. Also, don't be afraid to use Pyroblast even if the enemy lives. This is because you know that you also run 2 Frostbolts and 2 Fireballs, so chances are you will draw into one of them very soon after if you hadn't already.

You typically want to mulligan for 2x Mana Wyrm, 1x Forstbolt, 2x Mad Scientist, 1x Kirin Tor Mage, 1x Unstable Portal and 1x Flamewaker in that order. The reason we want the Tor Mage is because chances are VERY high that one of our 4 secrets will be drawn soon and playing a free secret is a huge tempo gain.

In addition, here are some mulligans you'll want vs each class:

• Against Hunters, you'll want to keep the Arcane Blast.

• Against Paladin you'll want to keep 2x Flamewaker. This is the only matchup where you would purposely keep 2 Flamewakers in your mulligan hand.

Firestorm 3.0 is a little weaker against Dragon Pally, Control Priest and Wallet Warrior.

This is a carefully designed deck so I would not recommend changing too many things around, but here are a few things you can do:

Vaporize can be replaced with Big Game Hunter or Mirror Entity.

1x Azure Drake can be replaced with Loatheb.

Dr.Boom can be replaced with Archmage Antonidas, Ragnaros the Firelord and Chromaggus (in that order).

Pyroblast can be replaced with Ragnaros the Firelord, Archmage Antonidas, Ravenholdt Assassin and Deathwing (in that order). The purpose of this card slot is for that extra "reach" to finish out the game when then the enemy starts running low on hp. They actually don't even need to be that low for you to begin chipping them down with minion dmg to face, hero power, fireballs and frostbolts etc. Try to think 2 or 3 turns ahead. Even Ravenholdt Assassin can get the job done efficiently if you use a little forethought.

August 27, 2015 (Post GT Expansion) - Harrison Jones has been cut because at the moment weapons have become a less less prevalent. In his place we run a simple Arcane Blast because it combines very well with Flamewaker and provides the 1mana spot removal we need now that everyone is playing more low cost early game minions. Polymorph was switched to Polymorph: Boar because it provides us an extra burst option while still giving us a way to deal with super threats and it's 1mana cheaper anyway.