Hi I'm ThreeHESIS a seasonal recurrent legend player. I've been playing hearthstone as a hobby since May 2014 and reached legend every season since June 2015. 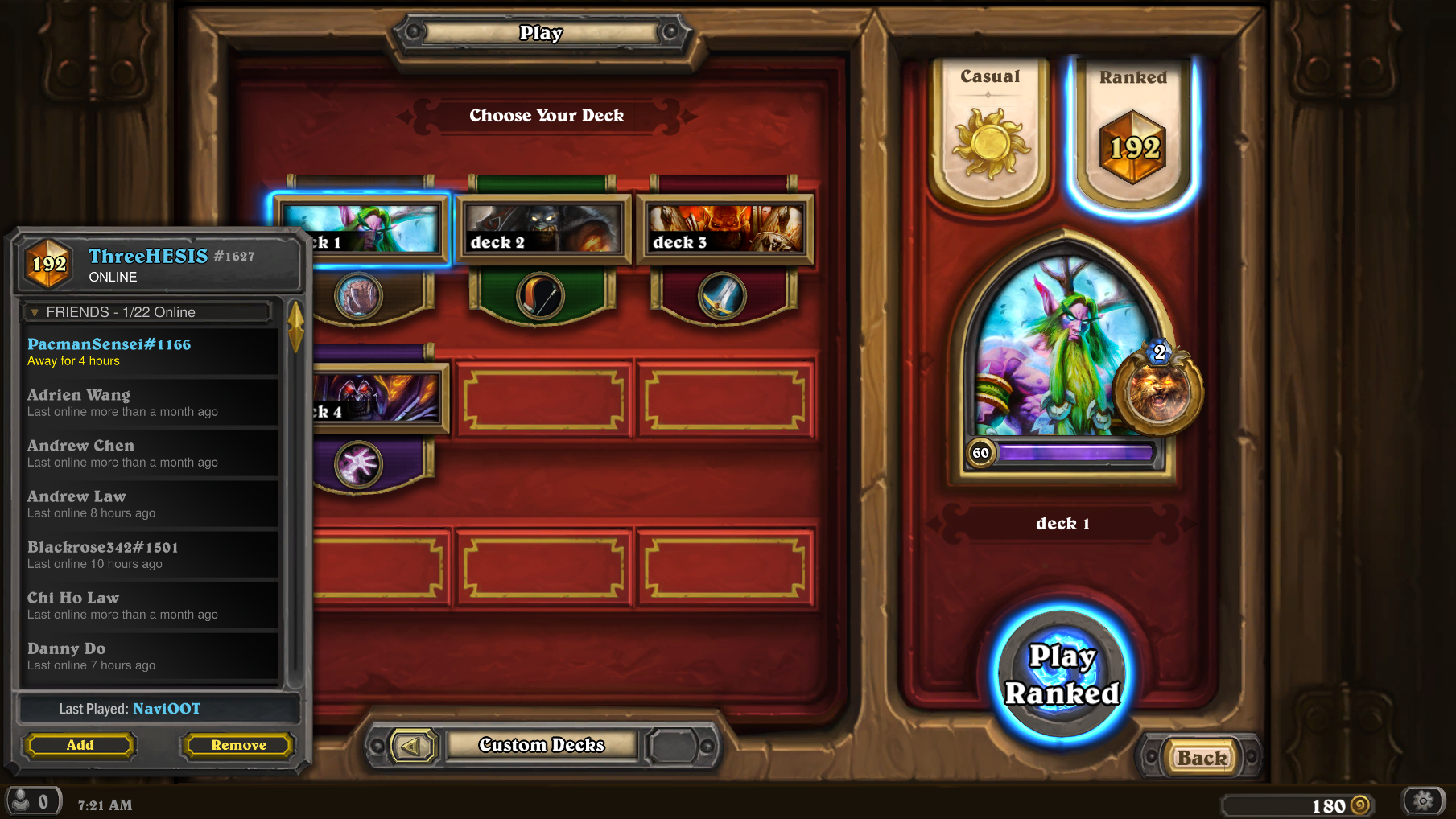 This deck was tested in a sample size of 113 games since tgt release with a record of 79-34 and a staggering 24-8 vs control matchups.

Here is my take on the intricate Druid:

Druid
I have been known to play minion heavy decks and the reason I do this is to consistently win tempo vs my opponent and dominate the board. Also, you never want to be in a position where you are given a chance to place a minion on an empty board but fail to dominate the board because your hand is full of spells and removal. Always fight for the board by placing minions with favorable trades and deaggroing the injured minions with taunts. Your minions are your source of board removal.

There are very gimmicky cards like kezan mistic, ooze, and harrison that players will run to win tempo but these cards are only effective to about 1/3 of the 9 classes out there. Since druids do not run secrets or weapons, this deck rejects players from gaining strong value and tempo.
Vise versa, this deck does not run any of those tech cards. I understand that the tempo gain is insane when tech cards are used properly but it is far more important to have a strong matchup vs all 9 classes than to tech for dominating a single class with secrets and weapons. Also,
This deck contains no bgh targets, it is actually quite difficult to lose tempo with this deck. You are simply asking a class to out tempo a minion heavy deck without using minions past 7 dmg and make efficient trades.

Remember: the druid combo is 14 dmg on an empty board and +2dmg on the bonus minions on the existing board for easy math.

Why is 2 Savage Roar and 1 Force of Nature run?
Savage Roar and Force of Nature are cards to relieve you from a further war on board control. This combo will instantly win you the game most of the time and since Thaurissan is run in this deck it is very possible to fit a hero power in, 2 savage roars in your combo, or perhaps a keeper/swipe. Often times, double savage roar with quantitative minions on the board will give you just enough reach for lethal but 2 Force of Natures will leave you with a dead play. So for this reason, 2 Savage Roars and 1 Force of Natures is played for synergy and because any 2 cards from this 3 will give you a pretty damn good reach for lethal.

Almost never overextend especially past 3 minions. At most you are playing 3 and they are playing 3 or less. You should be winning the board around turn 4-6, anything the opponent plays past 4 minions is punishable by Mind control tech, swipe, and Sylvanis. Playing more than 4 minions is actually a liability since you may get AOEed and just lose the game from 1-2 cards that got insane value from your overaggression.

Never coin out wild growth since this deck does not run shades or any 3 drop bodies.

Nexus-Champion Saraad allows druids to have insane value when lore is not found or late into the deck. A 5 drop for 4/5 is very fair alone and drawing a free spell for a turn you are hero powering anyways is insane. The best part of this card is that it holds a great threat for your opponent. You can safely assume this card has a taunt just like Thaurissan and most likely removed next turn baiting out removal spells for ancient of war. Failure to do so will be give you insane value and just win you the game.

Detailed mulligans for this deck will be released after 50 upvotes!
http://www.twitch.tv/ThreeHESIS

To improve the matchup against aggro and weaken it vs control, switch savage combatant for Sludge Belcher. If you feel you are suffering late game reach with this deck, consider switching one copy of Mind Control Tech for Ysera or Cenarius.