The deck is having quite a lot of success, here and in the competitiveHS subreddit!
Some people are also experiencing very bad loss streaks, so instead of telling them to git gud, I decided to record some random matchups. I'd like to do some more (maybe against pala, mage and lock) with live commentary, check video info for further informations.

Why you should play the deck: 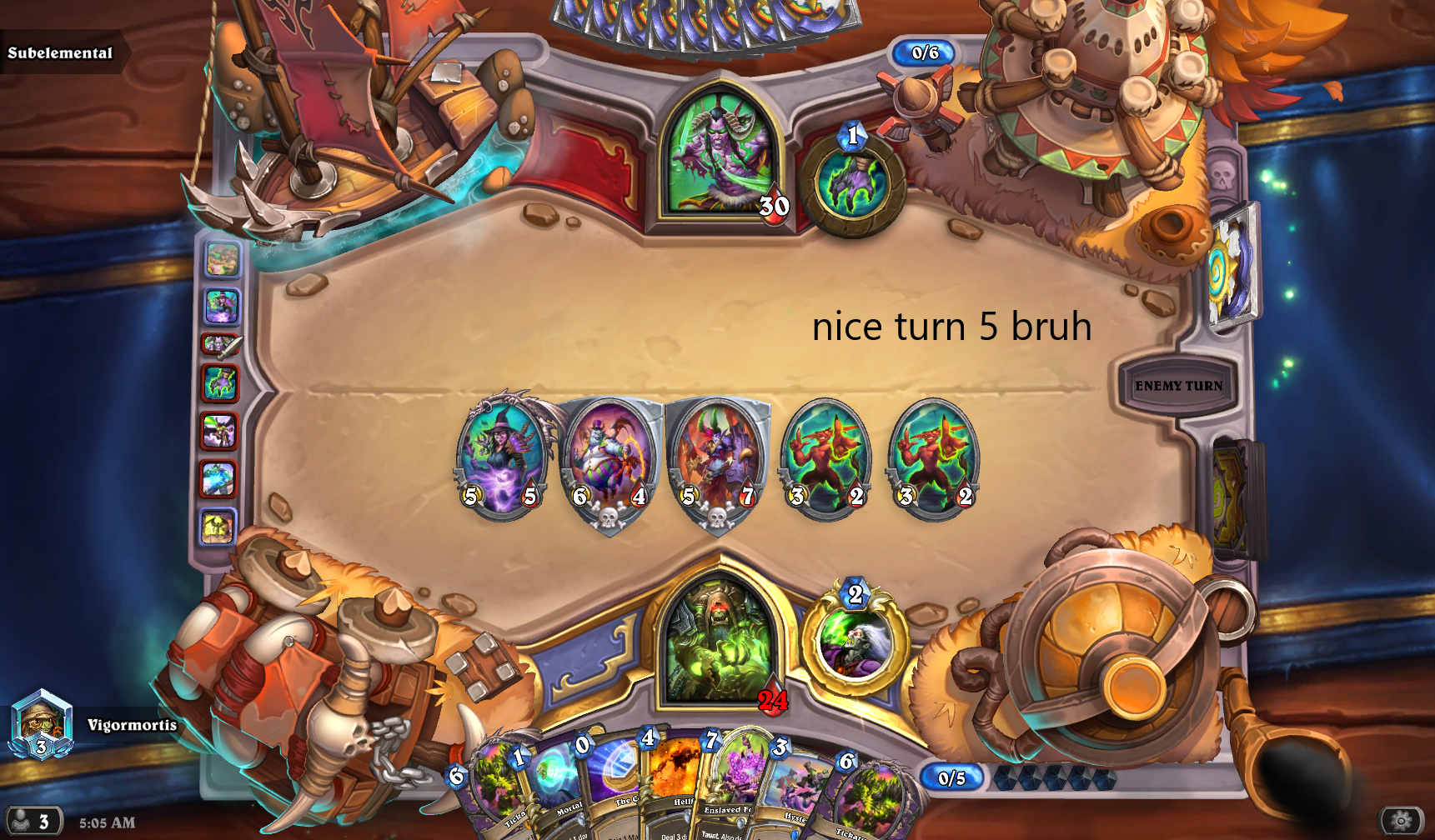 I'm Italian, I play since beta and got to legend pretty every month with offmeta decks (reno priest with double shadowform, very hybrid hunter, miracle shaman etc) and won some local tournaments (I actually won a bo3 final with a Moorabi keleseth spell shaman).
If you know Chump or do you like to brainstorm troll decks feel free to add me in game. (IGN: Vigormortis#2439)

Shootout to my multiple-legend friend Froppino which helped me build the deck, his ability to find niche spots for fun decks like this when the meta is so stale still amazes me after years <3

This deck is 10/10 fun. The most retarded factor in this deck is the mana cheat with The Dark Portal and Free Admission, IE you are able to play Ring Matron on turn 3 consistently, or multiple fat demons by turn 5 (personal record: played 3 corrupted 9-9 Tickatus by turn 5) with Felosophy.

The deck performs well against aggro, Man'ari Mosher is an awesome healing tool. You can combo it with Enslaved Fel Lord's cleave for juicy 21 hp heal or with cheaper minions on the board in faster matchups (the underrated Imp Swarm and Ring Matron bois will help do the job).

Yes, you winally found a deck where Archwitch Willow (as your only non-demon minion) is beyond amazing.

Matchups from Dsomething to Legend:

Legend proof is recorded on video, will upload the gameplay after +10 upvotes

Now it's even being tracked by HSreplay.net.
Idk why is people keeping Felbolt. 2% is actually keeping 7+ demons, even more Rustwix o.O

Baseline it's hard toss for Dem Studies and Free Adm.

Dark Portal is 90% keep, ofc always on coin. Felosophy is keepable with portal, very strong with coin. You can think about tossing portal against hyper aggro if you already have a Free Admission and any 1-2 mana spell.

Keepable (it's kinda always worth to look just for mana scam, I usually keep only if I already have at least one of the above):

Mosher or Drain Soul against aggro if on coin;

Imp Swarm if already have studies and Free Adm is usually nuts; In slow matchups lways keep a t2 play with coin and Admission, as you can't tap on t2 without overdrawing.

Keeping Tickatus/Willow/Jaraxxus against warlock and priest I don't think is a mistake but you are cutting your chances for a funnier game for sure.

Deck difficulty: 7/10.
Most turns seem pretty straightforward but 2 to 3 turn of planning ahead truly makes the difference.
It's also the reason why people are having bad results with this deck on lower ranks, and no less than 50% in high legend.

Let me know how this works out for you in the comments below.