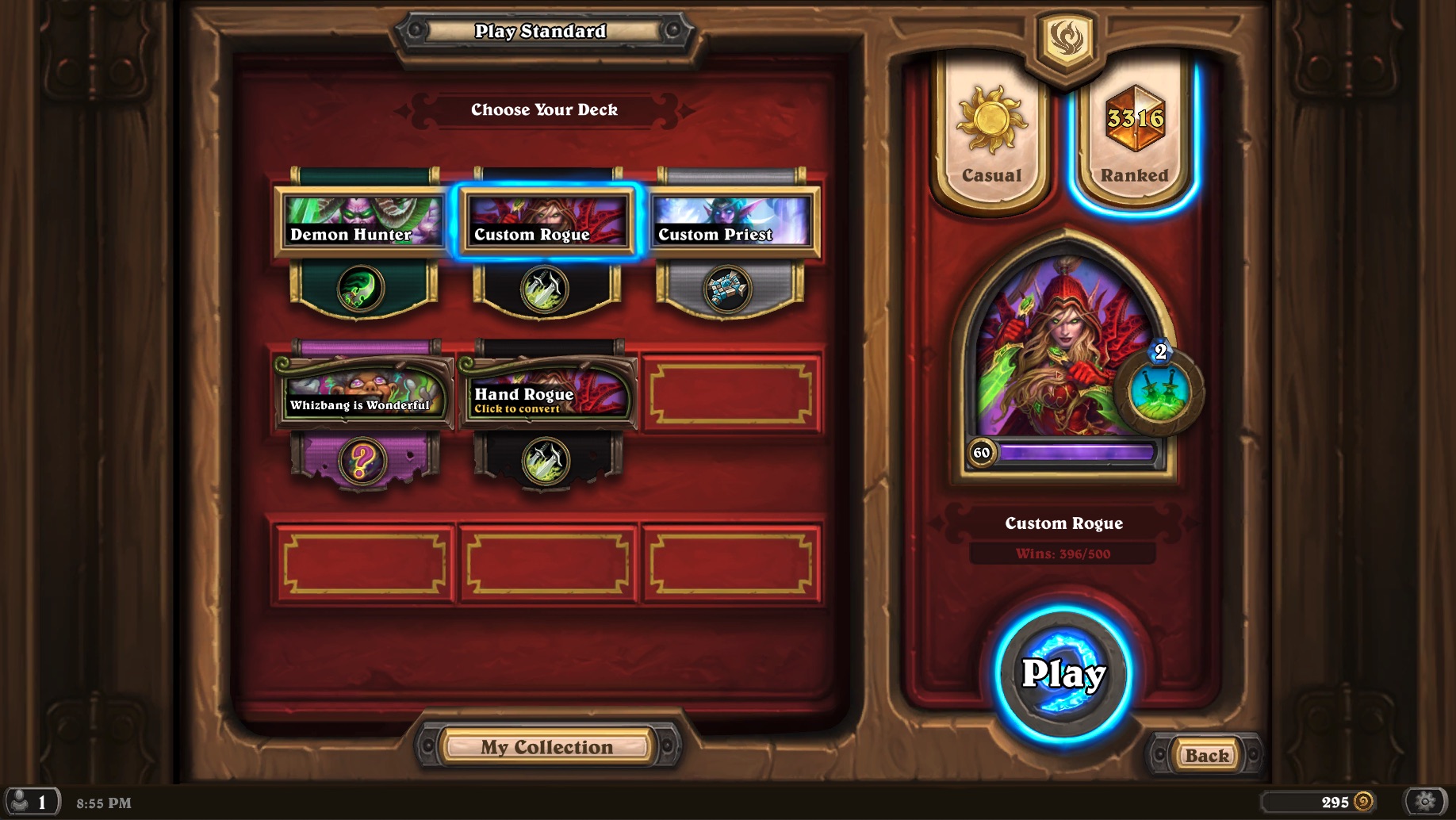 I am getting a high win rate (around 80%) in my climb to legend with this deck (also a dozen of games on legend) so I am sharing this deck with you. I admit there's a luck factor to get such a high win rate but the deck is just strong and fun to play. However, this is the hardest deck to pilot that I've ever played. There are just too many options in the mid late game. Therefore, if you want to try out this deck, be patient and get better at it.

News: other things are nerfed so this deck is even stronger now!

This is a slow deck that in some cases can get a fast start. The key to play this deck well is the  balancing of your pace and understand your match ups. Your best turns are after turn 7, where you can play your Galakrond or Wanderous Wand. When you have free cards in the burst turns, try to dump things fast as time is also you enemy. I am flipping good at the deck but I still rope for burst turns. Also, hand space management is also key since very often your hand is crowed with cards that gives your more cards. Sometimes you have to discard cards just to free your hand space (e.g., throwing a Goblin lackey on to an empty board).

The secret package is there because of the power level of Blackjack Stunner and Shadowjeweler Hanar is just too high to ignore. Blackjack Stunner is extremely effective against 9 cost cards as they as no longer be played after bounced. e.g., use it on those 8/8 or 4/12 dragons. Shadowjeweler Hanar can build you a Christmas tree and provide a tons of value. However, this is not a secret based deck, so it is common to hold secrets in hand just to combo in the future.

Umbral Skulker is tough to be played correctly. There are a few main usages: (1) make a huge Edwin (at the right time) (2) draw for free then you can actually play more stuff this turn (this requires you to play things really fast, so when to decide to draw with your Galakrond or Wonderous Wand, do that immediately at the start of the turn so you have time to do other crazy things (3) save three coins for the DragonHoof + Galakrond (or the other way) combo. If you do not see good usages like these, do consider playing a 1 mana 3/3.

The other thing I like about Umbral Skulker is that you can play it preemptively unlike Faceless Corruptor which is better be played to trade the opponent's board (5 mana vanilla 7/7 isn't that impressive). You can smooth out your turns by saving coins, allowing to "take it slow" for a turn (e.g., don't have many proactive cards) and burst when you need to. Dragonqueen Alex is strong because of its burst potential, and playing your Galakrond and DragonHoof on the same turn is stronger than on two separate turns for the same reason. However it is inconsistent so I updated the list to swap one out for a Faceless Corruptor.

On Fatigue Games: It is common for this deck to fight fatigue games and here's how you win. (1) Don't be too afraid of drawing, unless you know tempo is not important for now and you deck has less than five cards left. When the opponent is a full hand priest, and you have only 4 cards in your deck, then don't play that Dirty Tricks to draw. If they have 5 cards in hand and you have 5 cards in deck, play that Wonderous Wand. In addition, always play your Galakrond as early as possible against slow decks to generate values with your lackey button (press it every turn). (2) Don't let them breathe easily. Spam your board in control match ups every turn and let them deal with it. You will notice that their hand sizes decrease over turns but yours don't. Eventually they run out of reactive cards. If you are at 35 HP and you fatigue, you still have 7 turns until you fatigue to death. If you managed to spam the board every turn, you can win within 7 turns. (3) Fish for fatigue winning cards early. When you know you're in a slow match up that is likely to go to the fatigue phase, pick the fatigue winning cards from your lackeys early. These cards include: Togwaggle's Scheme, Waxadred, Shadow of Death (surprisingly good late game value card, use on Waxadred to double the fun), Golden Kobold, Dragonqueen Alexstrasza, and any other card that generates the most value.

Demon Hunter: This is the hardest matchup simply because the demon hunter is too strong right now. Your health is more important than ever. You have to understand when to counter push. The key card to keep your eyes on is their Altruis the Outcast. Before they play the card, do not go too wide because it will be wiped out anyways. However, after they played that card you can go super wide as their other aoes are weak. When you have an option to taunt up a big minion and a small minion, use it on the big minion as their health would suffer more by attacking it. Blackjack Stunner can be used for a lower value (e.g., bouncing back a 2/2 is fine) as you usually win if you can drag the game to the late game. Also Shadowjeweler Hanar provides a great distraction, so sometimes if you are dying, just slam it onto the board so the other player has to deal with it. Also, fishing for Alexstrasza with your dragon lackey can help you stabilize. I've never lost a single game where I discovered an Alex.

Spell Mage: They have mostly reactive card so you can develop comfortably in the early and mid game. Just make sure you have an answer for their 6/6 dragon (e.g., save your Blackjack Stunner together with a secret). Play for a little tempo but mostly value. In the late game you can play a board of stuff every single turn and they just can't deal with it. Eventually they ran out of cards, fatigue, and lose.

Galakrond Warlock: You two have very similar paces. Their biggest threat is actually Crazed Netherwing. I would love to Flik Skyshiv it so I don't have to worry about it anymore. Prepare for Dragonqueen Alexstrasza by spamming the board every turn so they can't play their queen easily, or save your Blackjack Stunner to bounce it and they won't be able to play it anymore. The only way for them to kill a huge Edwin VanCleef easily is their Plague of Flames, so make a big one once they ran out two of them. If they twisting it you also don't lose so much. In general, you have more values in the deck, so keep up the tempo so they don't rush you down.

Spell Druid: Flik Skyshiv is your MVP, always keep it in your starting hand. Also, they can't deal with an early Shadowjeweler Hanar, so play in on turn two to disgust them. Other than that, try to build a wide board every turn so you have things to trade into fire flies and forest aid. If they don't have anything on board, their buffs are useless and you win easily.

Embiggen Druid: Blackjack Stunner is extremely effective. Don't hesitate to bounce their big stuff even if they have battlecries. Also Ambush one hit all their big guys so you want to play it preemptively. And again, they can't deal with an early Shadowjeweler Hanar, so play in on turn two to disgust them.

Priest: They have a lot of reactive cards and you win by out-valuing them. Play your Galakrond as early as possible and press the hero power to get lackeys every single turn. Spam the board every turn (but don't over commit, ~10 attack is enough) so it's hard for them remove and develop at the same time. Eventually they run out of stuff. Do not afraid of drawing because even though it is most likely you fatigue faster than they do, you can take fatigue damage for a few turns but they will soon run out of removals. Also, pick Togwaggle's Scheme with your spell lackey so you have a guarantee fatigue win.  The way you lose is their mass resurrect turns, so it is vital to have board every single turn even though you know your board will be gone by the next turn.

Hunter: Blackjack Stunner is your best tool against their death-rattle minions. Ambush is nice against their 3 health 1-2 attack early minions. Your forms of healings are: 5 from Galakrond, 5 from DragonHoof, Potential Khartut Defender from Pharaoh Cat, Potential Alexstrasza from dragon lackey, Potential Ice Barrier from Hanar. If you're low on HP, only trigger their explosive traps until you can finish them in two turns. It's not like DH match where you win by stabilizing because Hunter can hit your face with their Hero power. You win by counter pushing very hard and win in one or two turns, e.g., making a huge Edwin or a huge board. Say you have 9 HP and they have nothing on board, instead of Heal 5 with your DragonHoof, make an 8/8 and finish them in two turns. Other than that, it's largely dependent on their draws. If they play Toxic Reinforcements on 1, there isn't a lot you can do.

Most Cuttable Cards: Umbral Skulker, Ambush (have at least four secrets though)

If you don't have certain cards, you can replace them with these cards:

Also, if you want my advice on certain matchups, just comment and I will add those.