The Last Call of Grandmasters enters week 2 this Friday! Last Call features 4-weeks of action in what will be the final year for Grandmasters. Unlike previous years, only the top 4 finishers of Season 1 advanced to the Last Call. Those twelve competitors have joined the top 4 Masters Tour points earners in a 16-player global region.

Full details of the changes to this year's Hearthstone eSports can be found here. All the competition can be viewed over on the Hearthstone YouTube Channel.

Drops will be returning for Grandmasters Last Call. Viewers can earn up to eight free packs just for watching the action live on YouTube. They will be awarded as follows for watching two hours of the stream. Viewers are required to link their Blizzard and YouTube accounts to claim packs -- directions can be found here.

You can earn up to 8 total packs as you watch Grandmasters! On any of the below YouTube channels, watch two total hours to receive one pack and two more hours for your second. Time watched is cumulative within each of the four reward blocks, so even if you can’t watch for the entire four hours in one sitting, your time will still count toward earning the Drops.

Once again Grandmasters will feature a rotating format from week to week. A summary of each week is below. This season also will feature an all new experimental format -- Trio! 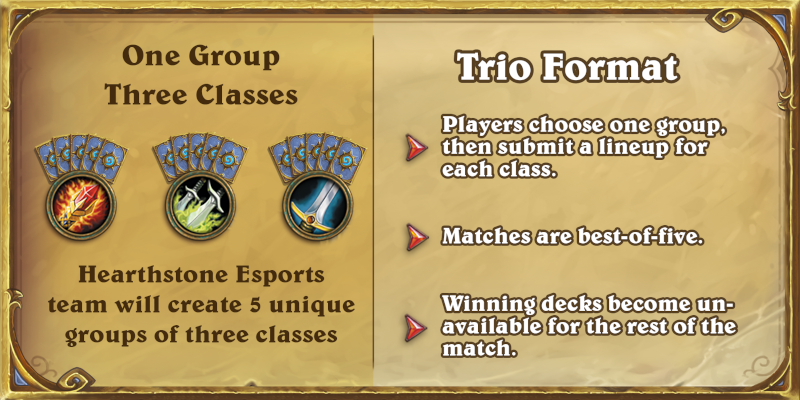 During weeks 1-3, players will be separated into four groups for dual-tournament play. Unlike in previous GM seasons, all matches will occur live on broadcast. The two winners of each group will then play on Sundays. Players will receive points based on total number of wins each week, which will determine final standings before the Playoffs. The new weekly groups will be posted to the Hearthstone Esports twitter!