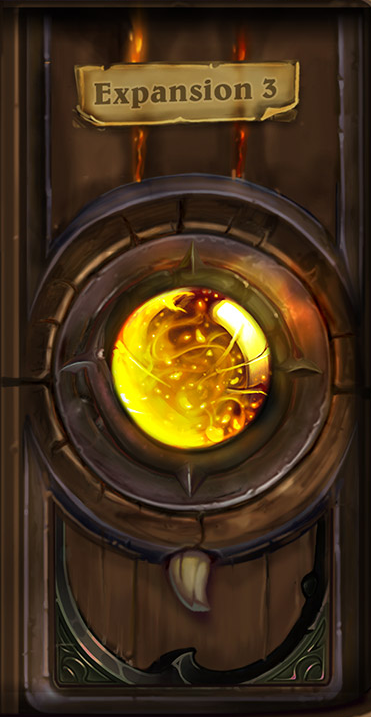 Near the end of every expansion we Hearthstone players collectively wrack our brains to try and guess what the next expansion will be. Sometimes there's good clues to make our guesses more accurate, sometimes we have no clue whatsoever and guess more based on what we would like to see than what we know.

Let us put the clues we have seen so far together and guess at what they might mean. First off, the picture with "Expansion 3". It's the oldest clue we have and Blizzard still uses a cropped part of it on their website to indicate the next expansion here.

What does it tell us though? There's some definite firey trails on the wooden top part, and an also pretty firey looking centre jewel, but other than that it is rather dull brown with little detail. There's 2 green-brown metal looking parts in the lower corners, but they do not seem to have any significant markings that would clearly point to something. The only detail that really stands out is the tooth or claw shaped thing below the centre jewel.

So, firey and something that looks like a tooth or claw. It does not take a huge leap of imagination for that to conjure up the image of Dragons. And as has been memed more and more throughout this rotation year, it is the Year of the Dragon and we have not yet seen any dragons featured in any way. Makes sense that the 3rd expansion would have some kind of Dragon theme, perhaps. Well, there's certainly something to that logic, but then, did we see any featured ravens in the Year of the Raven? Did we see any mammoths featured in the Year of the Mammoth? The answer there is a pretty solid no. Truth is however that Blizzard have taken a decidedly more story driven approach this year with Hearthstone. Maybe that story based approach lead to them to choose to put this forshadowing out there at the start of the year, to only bring it up once we got to the seeming end of the tale of Rafaam and the League of E.V.I.L.that we started with the Rise of Shadows expansion.

But this is where things get tricky. Because the last time we dealt with Rafaam and the League of E.V.I.L. was at the end of the Tombs of Terror adventure. There, after the fight with Tekahn, Plague Lord of Flame, we witness a conversation between our heroes, the League of Explorers which we will detail below.

Quote from League of Explorers

Reno: We did it! We saved the world! We're THAT good!
Elise: What did Tekahn mean about the "Final Plague"?
Brann: And where did Rafaam run off to? Dalaran is gone!
Finley: Indeed, my friends. I hazard that this ordeal is not...quite...over.

Just to make this clear for the people who did not play the adventure, it revolves around plagues being released, which resulted in several Plague Lords being spawned, which were really difficult bosses to defeat. And now Rafaam, the Arch Villain, has scampered off with the Final Plague, whatever that might be. Lovely.

What we have then is 2 different prominent clues without a way to properly connect them. On the one hand we have Rafaam and his Final Plague traveling somewhere on the floating city of Dalaran and on the other a picture that conjures images of Fire and something wild and primitive looking. None of the plagues had anything to do with dragons, and neither did anything else the League of E.V.I.L. or Rafaam did this year, with one exception: They crashed Dalaran into Blackrock Mountain at one point, home of several factions, including the Black Dragon flight. Would this be the connecting factor then? Or is it more reasonable to expect that Blizzard would have not let the League of E.V.I.L. make a stop in Blackrock Mountain in the summer if they intended to go there for an expansion in the winter?

Find Anything That Sticks, Part 1 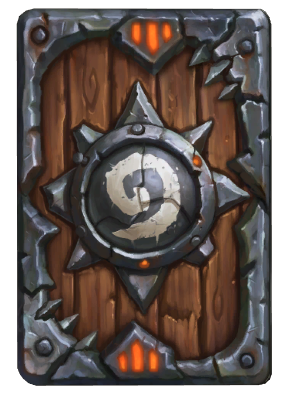 With nothing making much sense so far, let's try to look at the clues separately to see if anything makes sense that way. The Expansion 3 graphic has 1 particular association in the Warcraft universe that makes a lot of sense: The Warlords of Draenor era orcs from the MMORPG.

As you can see from the official expansion card back from that expansion, the themes are strikingly similar: dark wood, firey accents and metal. The players and NPC's from this era were also known to wear clothes and armor made from the wild environment of Draenor with plenty of tusks and teeth and claws.

Without the knowledge about Rafaam and his cronies it would make a lot of sense to see the expansion having something to do with this part of the Warcraft story. Then again, there's nothing really connecting the League of E.V.I.L. to Uldum either, and we still ended up there, so who knows?

Find Anything That Sticks, Part 2

Similarly, if we ignore the Expansion 3 graphic, and look at the villains of the current Hearthstone story, then it's easy to lock in on Rafaam. He's been the mastermind behind all of this and it's his actions that have lead us to where we are now. So who exactly is Rafaam? 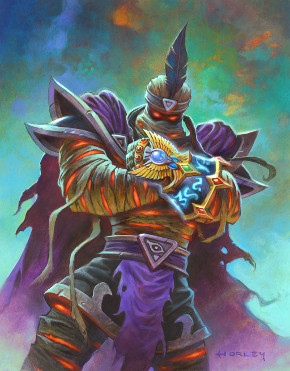 Rafaam styles himself as "The Supreme Archaeologist". According to lore he travels across worlds to find treasures, though the purpose for collecting them has never really been clear. This "travels across worlds" bit implies he has gone to more places then just Azeroth, which makes perfect sense, since Rafaam is an Ethereal, who are a race of interstellar travelers specialized in finding and trading (arcane) treasures.

They originally lived on the world K'aresh which was invaded by an enormous Void being called Dimensius the All Devouring, who's void energy ripped the world and the Ethereals apart until clever Ethereals devised a way to shield themselves. They still ended up as mere arcane infused souls, who had to use magically infused cloth to wrap themselves up and keep their spirit together to survive before Dimensius completely took over their planet and scattered the Ethereals across the universe, where they still live mostly as traders and peddlers in rare and powerful items.

All we know for sure is that the League of E.V.I.L. is still out there with the Final Plague and bent on revenge on the world that rejected them and we can guess that the League of Explorers won't just let Rafaam run off without trying to stop him. But in what kind of setting can we expect the story to continue?

We end up with quite a lot of things that make sense in some way, but nothing that fits everything we know perfectly. What, in the end then, is the most likely thing?

Let us know in the comments what YOU think will be the next expansion!