This weekend the Battlegrounds Lobby Legends saw it's third ever tournament, Eternal Night, and it was a blast. We will fill you in with the results of both competition days and of Final Standings and the winner! Congratulations to them and commiserations to the players who missed out! 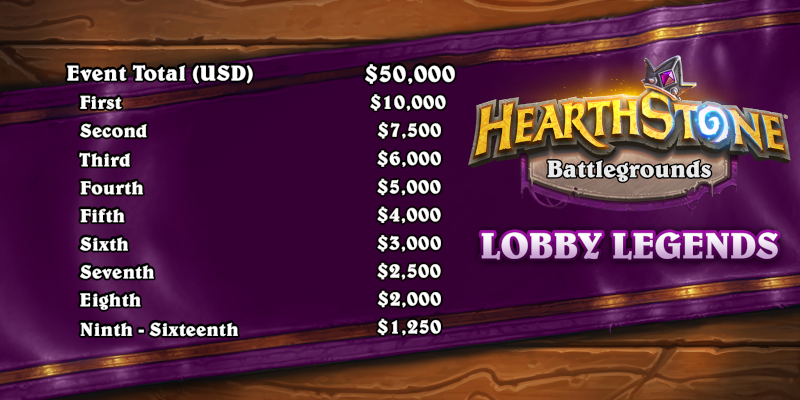 This tournament was played with the 16 eligible players divided into 2 Lobbies, A and B. On Day 1 three games were played in each Lobby, with a simple scoring system, ranging from 7 points from first place to 0 points for last place, with the rest of the rules the same as you would find in any other Lobby in Hearthstone. The first 4 players in the standings after 3 games in each Lobby make it through to the Top 8 on Day 2.

In the Top 8 on Day 2 was played in the so called "Check Format". What this means is that the players get points for their ranks in each game, just like on Day 1. Instead of capping off after 3 games however, the point total is counted up to 20 points, which is the "Check" point.

After the moment a players gets 20 points their goal is to end as a winner in 1 Game, which secures them the victory. So getting a first place before hitting 20 points does nothing. This means several players can end up with 20 points, and that multiple games might have to be played to decide a winner and that the first player to 20 might not end up the winner, if they cannot secure a first place finish afterwards. 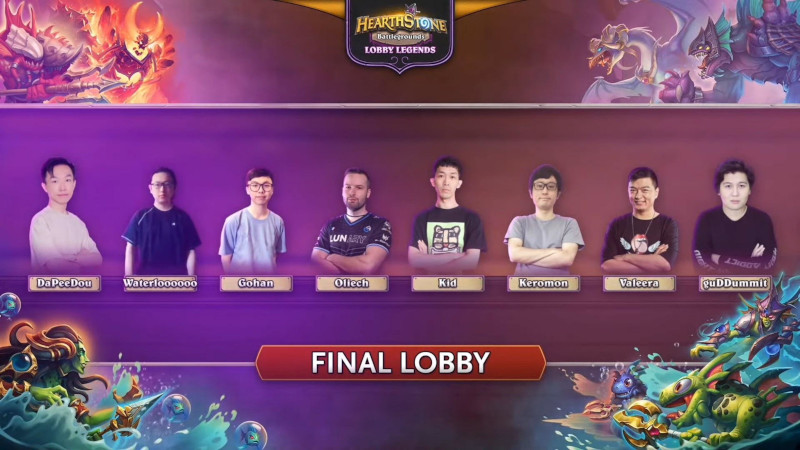 It took only 4 games for a player to put the Lobby on Check, and it was DaPeeDou! His good fortune stopped dead there however because his Hero choices in Game 5 were Queen Wagtoggle, Ragnaros, Saurfang and Captain Eudora in a Dragons, Elementals, Murlocs, Pirates, Quilboar lobby. He went with Eudora as the best choice where he'd either highroll and have a chance or low roll and stand no chance.

He stood no chance as it turned out, and at the end of Game 5, Waterloooooo joined him as having the lobby in Check. With the start of Game 6 DaPeeDou chose Vol'jin as his hero and Waterloooooo picked Millhouse. The way things started for Waterloooooo were amazing, with him ending up getting 3 Deck Swabbie and then a 4th on his second turn, making for amazing economics in his first few turns and rapid level up of his Tavern Tier.

And things didn't stop there. Not long after Waterloooooo had a Nomi, and two Dazzling Lightspawn and was rolling hard, taking time to make sure the Lightspawns procced a bunch for further snowballing. The other players put up a brave fight in the face of this, but there was no stopping Waterloooooo, who won the game and with it the title of Lobby Legends: Eternal Night Champion! 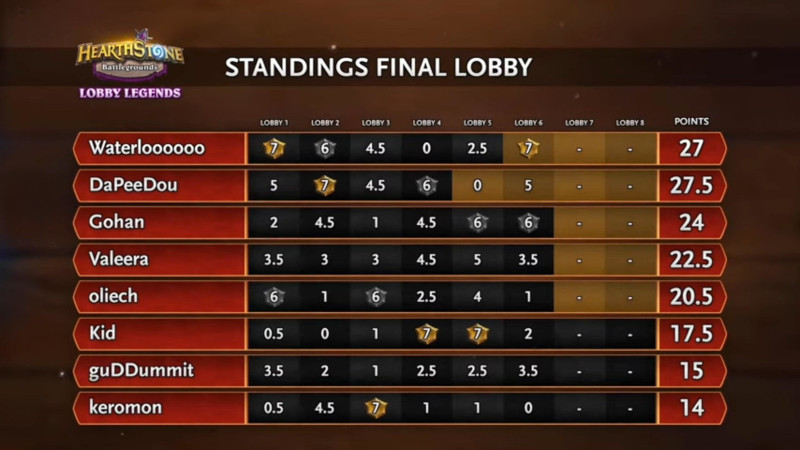 The tournament ended up going 2 games after the Check was reached, which made for some real intruige, and edge of your seat moments. There will be further Lobby Legends in the months to come, so we hope to see you again for those, as of yet unnamed, Tournaments!

In the meantime, let us know your thoughts about this official Battlegrounds tournament in the comments!