With Darkmoon Faire almost upon us, everyone can’t wait to use some of the new decks we’ll be able to make. We, as well as many of you, have discovered several potential combos that will soon be possible. Here, we'll talk about some of the interesting synergies these new cards will have with some cards from Wild. 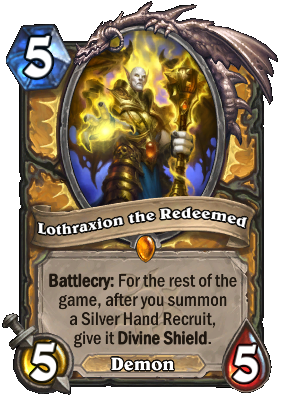 Any odd cost card that can support the army of 1/1 Silver Hand Recruits Odd Paladin pumps out is taken under consideration for the deck. One look at Lothraxion the Redeemed and you can see that he does it better than almost any other. Your opponent will have to spend the rest of the game using 4 instances of damage just to clear away the minions created by your Hero Power. 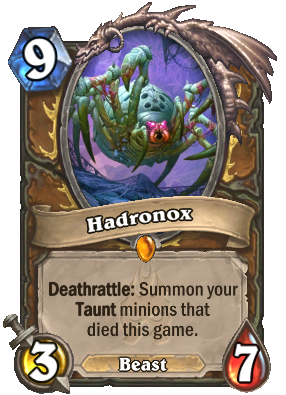 Greybough is already a fairly sticky minion. The more that die, the more Hadronox will resummon. It’s a very annoying board for your opponent to deal with if they lack a way to eliminate them all simultaneously. 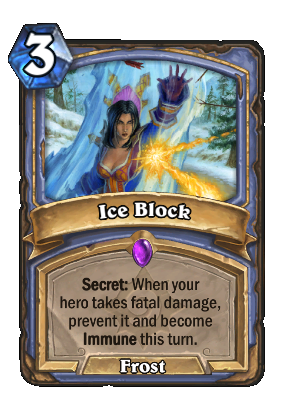 Occult Conjurer is clearly intended to be a follow up turn 4 play to casting a Secret on turn 3. However, this won’t work if the Secret is triggered beforehand. Ice Block lasts longer than any other Secret. So it will not only make sure you get full value out of your Occult Conjurer the next turn, it will likely be able to do so during most stages of the game. 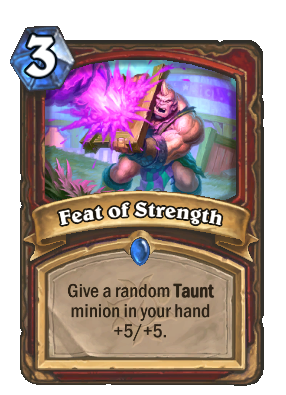 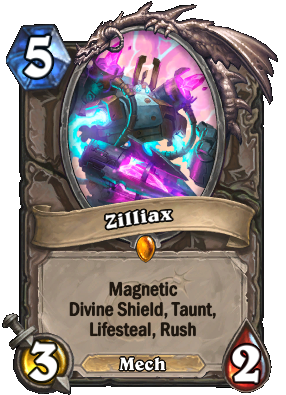 Anything that makes one of the most popular minions in the game even more of a behemoth than he already is can work really well against any board, especially aggro. Since Feat of Strength specifically targets Taunt minions, you can easily aim the stat boost to make sure your Unified, Precise and Perfect minion becomes an (5) cost 8/7 monster. 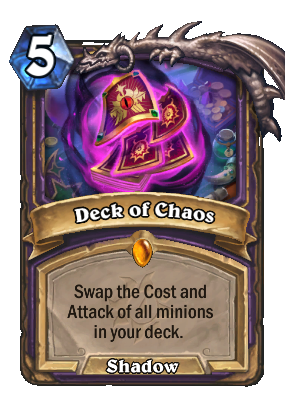 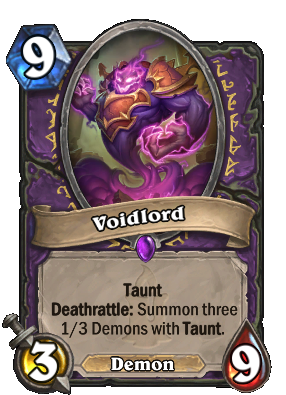 The bigger the Attack/Cost gap, the more value you’ll get out of Deck of Chaos. Of course, the minions you include in the deck will have to be capable of functioning without the buff and discount or you’ll be frequently be struggling until you draw it. Voidlord gains one of the biggest value jumps through this spell becoming a (3) cost 9/9 with its original effects. It can surpass the tempo loss from playing Deck of Chaos by itself and is even a good minion even if you draw it before the value boost. 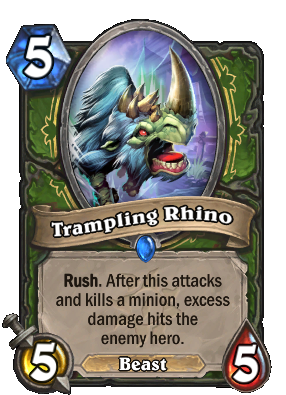 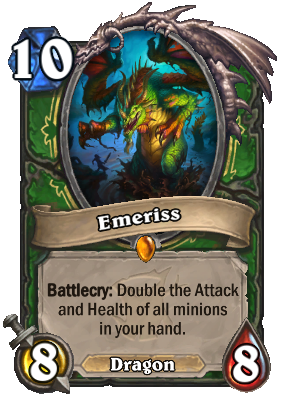 While it’s not a combo that can bring your opponent from 30 to 0, it’s a relatively powerful finisher that’s way easier to set up than a hand full of free King Krushes. By the time you get to turn 10 , you would most likely have dealt a fair amount of damage to your opponent. A pair of 10/10s whose overkill damage hits face can easily set up for lethal if not outright kill them. 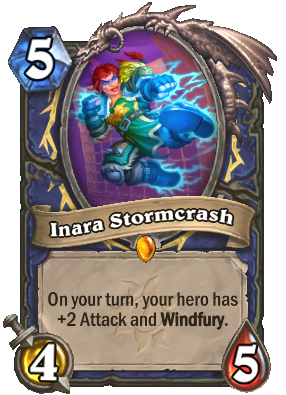 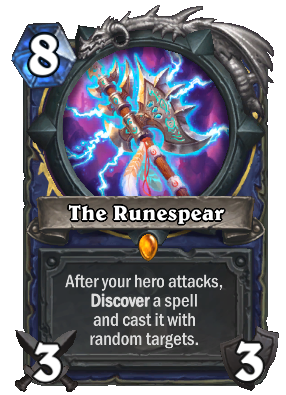 The Runespear has potential for great value, it’s just a little slow in getting that value getting in only 3 damage and 1 spell each turn. With Inara Stormcrash, you can turbo put 10 damage and 2 spells instead, making much easier to keep up pressure. 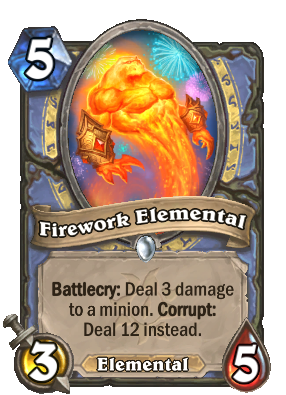 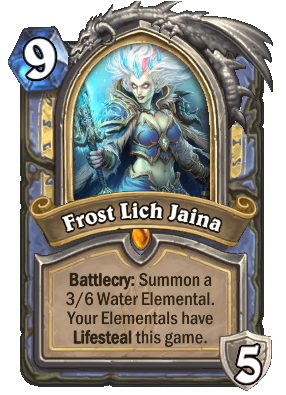 Jaina’s Death Knight has always had a few Legendary Elementals that significantly heal her such as Ragnaros the Firelord, Siamat, and of course Baron Geddon. However, Firework Elemental has a couple additional things going for it. It’s easily controllable damage, a notably cheap minion with good stats, and you can have two of them in your deck. If your running Frost Lich Jaina and a decent number of Elementals, consider adding Firework Elemental to your deck. 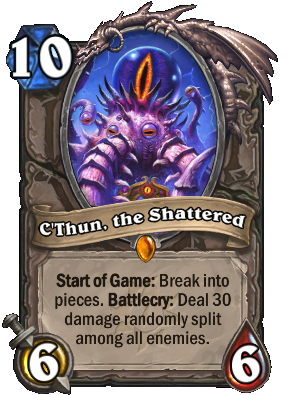 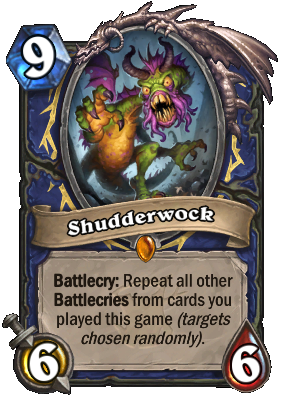 Shaman has shown in the past that it can stall out long enough to make combo decks work, so one centered around C'Thun, the Shattered isn’t a bad idea. If you opponent has 30 or less total Health across their hero and minions, new C’Thun will just kill them by himself. But usually minions will soak up a chunk of the damage since you won’t have the mana to play anything else. After you’re opponent’s board is decimated and their remaining Health is significantly cut down, Shudderwock should be able to machine gun them down to zero. A similar combo can work in Standard with a preemptive Tour Guide after completing the Uldum Shaman Quest, the aforementioned combo requires less set up and can even work regardless of the other 28 cards in your deck are. 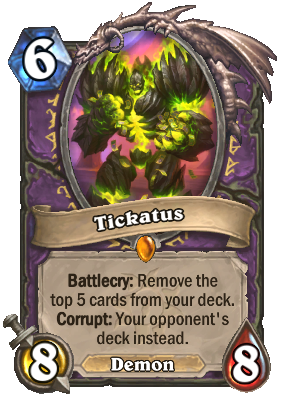 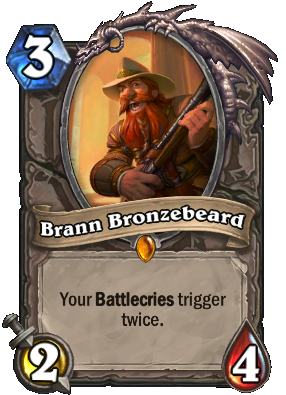 Tickatus is already a strong card be himself. Plenty of Wild decks tend to rely heavily on combos in order to function. While removing 5 cards from their deck can severely limit their options, but burning 10 of their cards can eradicate most of the cards they needed to follow up with what they’ve already set up for. Since it specifically destroys the top cards of their deck, this is probably Lorekeeper Polkelt’s biggest counter. You can annihilate your opponent’s entire game plan who rely on their best cards like Highlander Priest.