The Second Season of the Hearthstone Grandmasters 2020 went into its seventh week this weekend. 48 of the best players in the world began the eight week event with a total of $500,000 and a ticket to the World Championship on the line. The season saw the same format as last season which saw players start with Swiss Rounds and are now divided into groups and completing Round Robin stages.

This weekend saw the tried and true format of 4 Deck Conquest with 1 Ban. The way it works is that both players bring 4 decks, and both players ban 1 deck of their opponent. They then choose to play a deck of the remaining decks and every time they win with a deck it gets eliminated. Once either player wins with 3 decks, they win the match.

Since we are posting our article close to the ending of Day 3, not all of the matches may have been put onto YouTube yet, so check the official Hearthstone Esports YT Channel for the uploads later here!

The Grandmasters started with 3 weeks of Swiss, where everyone scored points. Those points lead to players being divided into Groups A and Groups B. In every Region those Groups will fight in a Round Robin style over the next 4 weeks before the Playoffs and Relegation matches will be played. Who gets to go to the Playoffs and Relegations will be decided as shown in the graphic below.

The Americas Region featured matchup between bloodyface and muzzy saw 2 highly rated players go at it, with the difference being that muzzy was fighting for a top rank, while bloodyface was, surprisingly, trying to stave off having to fight in the relegation bracket next week. Game one saw bloodyface bring out his Tempo DH deck versus muzzy's Control Priest deck and bloodyface wasted no time in trying to get face damage in on muzzy. Muzzy on the other hand made some deft plays to stay alive, but bloodyface's pressure was unrelenting and he eventually brought home the win. Game two saw bloodyface on his Tempo Mage vs muzzy on his Rogue deck. This game was a dizzying ride, which saw muzzy use Secret Passage to lock spells from Evocation into his hand and other neat tricks and plays. In the end Muzzy's resources and his big Edwin were too much for bloodyface to deal with, letting muzzy even the score.

Game three then saw bloodyface swap to his Priest deck, with muzzy taking up his Tempo Mage. This game was utter insanity and went deep into fatigue, with both players going back and forth on board and in hand, with tricky plays and smart decisions. In the end bloodyface ended with a Deathwing on board that got frozen twice in a row, that would have given him lethal, only for muzzy to snatch the win away from under Deathwing's nose. Sadly this is where the YT broadcast ends, and since we did not see this game play out live due to timezone differences, that is about all the reporting we can do on this series. We know from the game log that bloodyface ended up winning the next game with Tempo Mage versus muzzy's Priest, getting his own back and that in the final game of the match, a Priest Mirror between the 2, that muzzy ended up victorious. We can only assume given the heroics in game 3 that these last 2 games were amazing too. The end result left bloodyface deep in the danger zone for having to play in the relegation bracket and muzzy with the guaranteed no. 1 seed in Group A. Bloodyface on Sunday lost his final match up, firmly placing him in last place in Group A and in the relegation bracket for next week.

The final standings (also shown below) in Group B of the Americas will mean that Firebat and Empanizado have definitely relegated out of Grandmasters Americas for the next season and will be replaced by the highest winning players across their region after the conclusion of Masters Tour Online: Madrid near the end of this month. 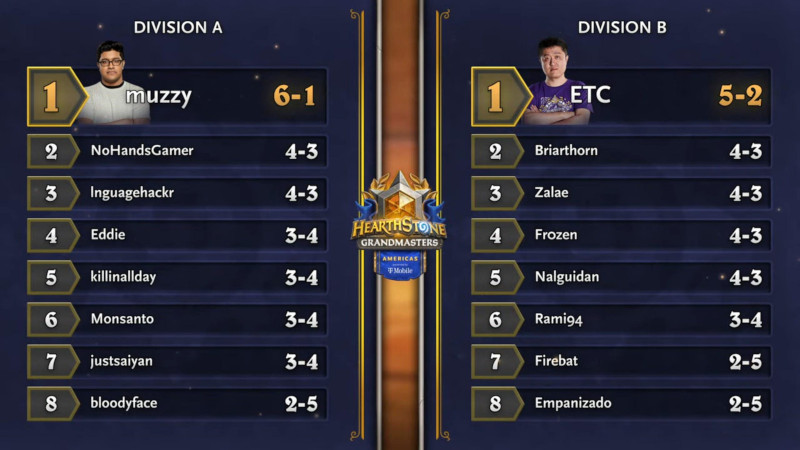 The Europe featured match between Rdu and Thijs was one between team mates and rivals. The idea was that this match up would also help decide who ended up in no. 1 rank and who might have to play relegation matches. Game one was a Tempo Mage Mirror match, which saw Rdu get on board first and he was also the first to get his Giants on board with Conjurer's calling. Thijs never recovered which gave the win to Rdu. Game two was again a mirror match, this time with Tempo DH. The game went quite back and forth, but Thijs was the one to find both of his Aldrachi Warblades and managed to do both damage and healing with them to even the series.

Game three then saw Rdu stay on his Demon Hunter and Thijs swap to his Rogue deck. Rdu pretty early in the game was faced with the problem of a Questing Adventurer, and went all in to clear it, which meant he had nothing left when Thijs steam rolled on after. It is likely he would have been dead anyway had he not cleared it. Game four was the best game of this match up, with Thijs on his Tempo Mage and Rdu staying on his Demon Hunter deck. The match had everything, with smart plays and calculating risks. Rdu spent a lot of the game on low health, but kept staying alive and putting Thijs on the spot but in the end Thijs eventually did find lethal to secure the match win and vault himself out of the relegation danger zone. He also gets the bragging rights of having beaten his team mate! Good luck to both players in this featured match in the Playoffs next week!

The final standings (also shown below) in Group B of Europe will mean that BoarControl and SilverName have definitely relegated out of Grandmasters Europe for the next season and will be replaced by the highest winning players across their region after the conclusion of Masters Tour Online: Madrid near the end of this month. 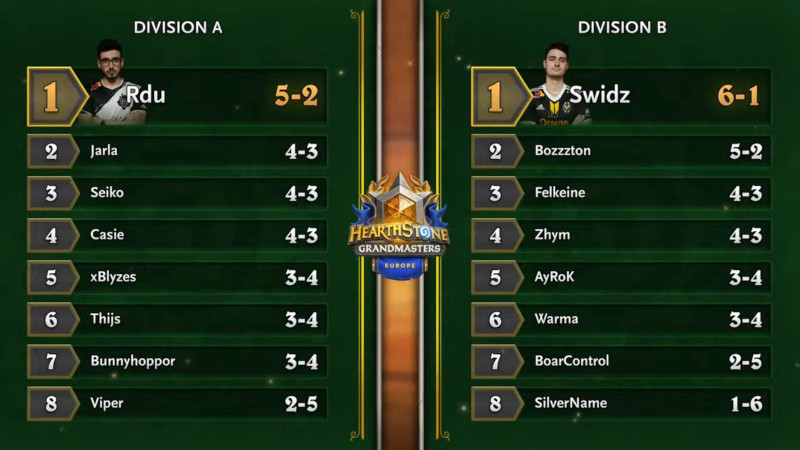 We had it all figured out for this match up, tom60229 was in danger of having to play in the relegation bracket and blitzchung was fighting to be among the top seeds. Just a few matches later in the tightly fought Asia-Pacific Group A and this match up had turned into "Winner of the match ends up being the no. 2 seed, loser ends up being the no. 3 seed and both players are totally safe". That might have been okay if the match at least had been a tightly fought affair, with lots of smart plays and back and forths. Sadly this match can be described in no other way then as "a beatdown". Blitzchung just did not get any draws or plays go his way while tom60229 had everything go his way and in little more than 30 minutes this match was done.

As we said though the consequences of this match had already been reduced to minimal by the matches earlier in the week and so tom60229's match win meant he ended up in 2nd place of Group A behind a near untouchable Surrender and blitzchung ends up in 3rd behind both of them. Good luck to both players in this featured match in the Playoffs next week!

The final standings (also shown below) in Group B of Asia-Pacific will mean that Ryvius and kin0531 have definitely relegated out of Grandmasters Asia-Pacific for the next season and will be replaced by the highest winning players across their region after the conclusion of Masters Tour Online: Madrid near the end of this month. 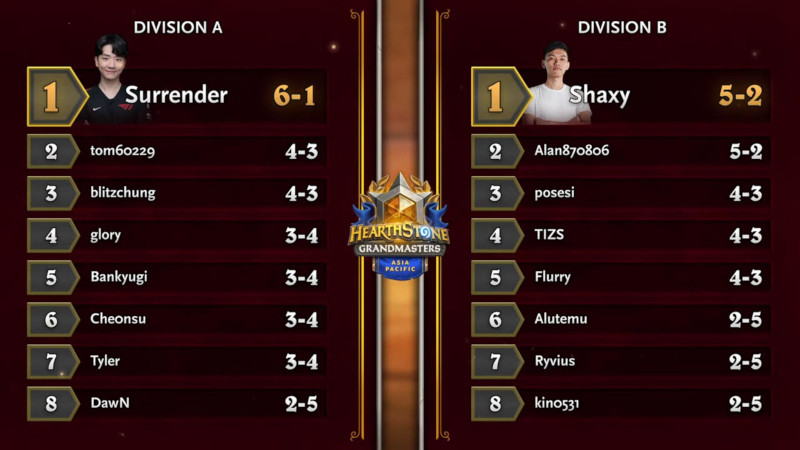