Hearthstone developer Alec Dawson just posted a bunch of tweets about the upcoming changes and his reasoning as to why they got changed.

Tons of amazing content coming out over the next few weeks. You may have also seen some balance changes. Overall, the meta is very balanced so our approach will be light unless there are greater gameplay concerns.

First up is Secret Passage, one of the top cards across all Rogue archetypes. Going down to 4 cards takes some of the raw power out but still gives you a solid draw option for a more aggressive package. Some future protection in this change, the question was when not if.

Moving on to Cabal Acolyte, going to 4 Health will tone down some of its defensive capabilities on turn 4 and post-Spellburst effect. Acolyte was one of the best performing cards in Priest and we want these sort of effects (mind control-esque) to be a deckbuilding choice.

Then there's Darkglare, this is a change mainly done for Wild. In Wild, Darkglare Warlock is fairly rampant and creates early board states that make for a lot of non-games. The change to 2/3 and 1 mana being refreshed is aimed to retain some of its identity in a smaller form.

Finally, we have two buffs! With the Darkglare change, we wanted to give Warlock a buff. Willow going to 8 mana makes for an intriguing late game option for heavier Warlock builds. We played at this mana cost for much of development and thought it was right to go back.

The change to Totem Goliath is more of a correction, the 2 overload was too limiting for a deck that wants to follow up with another strong play for 5 mana (bloodlust, second goliath). We'll continue to monitor how Shaman performs in the meta and see if other buffs are necessary.

Thanks again for the feedback throughout the first month of Scholomance. Excited to see how the meta continues to develop!

These are the nerfs Alec is talking about 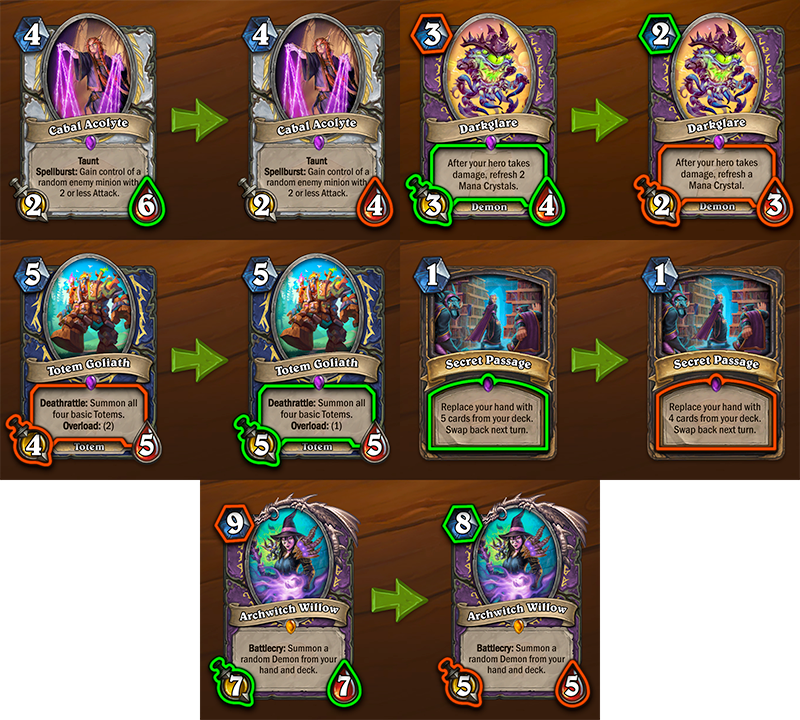 (you can click on the image for the full image version)