Year of the Phoenix Expansion Speculation!

One of our favorite parts of the Hearthstone calendar is the periods just before the announcement of a new expansion, when speculation starts to heat up: What Could The Next Expansion Be?!

As you can see in the official graphic below there are always some details in the art work that make you able to guess at what might be coming. 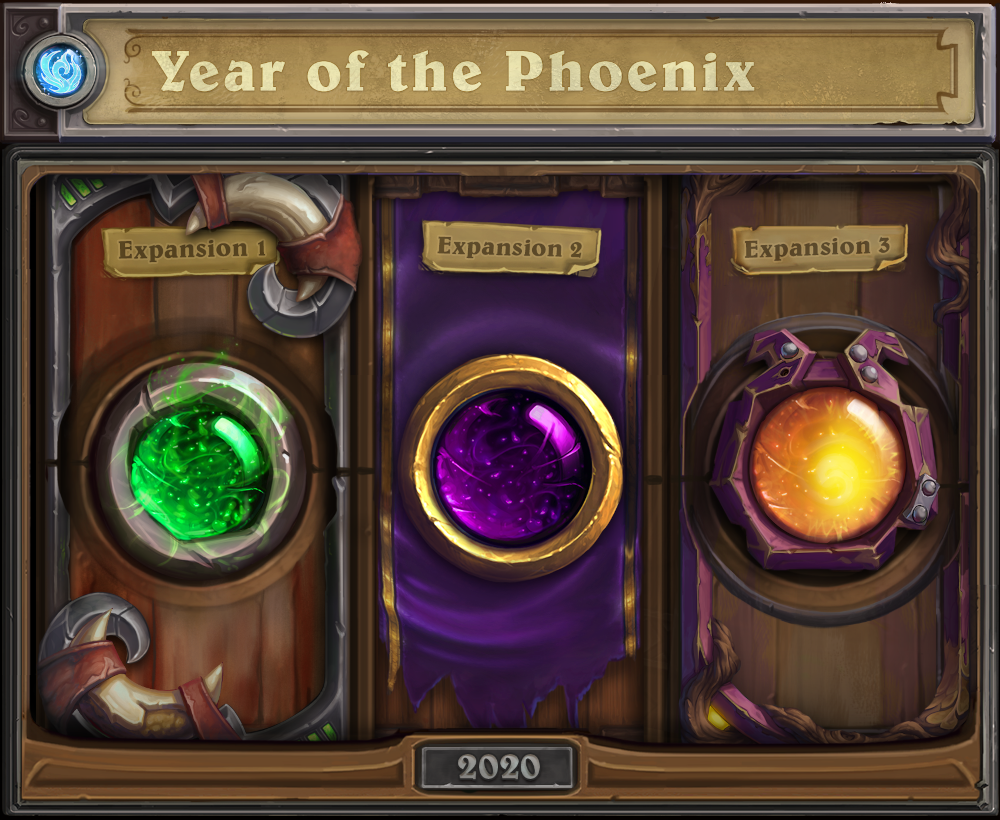 For instance, in the first panel, which we now know was Ashes of Outland, we can clearly see the Fel green bauble in the centre. The bauble is a clear hint at Demon Hunters, but the surrounding parts of the panel hint at things that only really make sense in hindsight: the claws and metal parts of the Rusted Legion.

So what then about the other 2 expansion panels, what do they portend?

Let's start with the expansion 3 panel, since there's a strong consensus there for the theme: The Darkmoon Faire. If you look at the kind of flaked, badly painted wood, and the purple colour it has, as well as the metal bolts in it, it all screams Darkmoon Faire to those that have been to the Island it is located on in World of Warcraft. The more natural wood parts that resemble branches or roots are reminiscent of the trees that grow on the parts of the island not directly involved with the Faire (but which do hold their own secrets and stories). In our opinion the mystery here is not so much what the theme is for expansion 3, but how they will choose to represent it in a playable form.

Speculation about the expansion 2 panel however is nowhere near as obvious, but since this is the next expansion, potentially being revealed within the next few weeks, it is of high interest to anyone that wants to know what's coming to try and figure it out. We have made an out take of the panel and present it below (click it for the full size version if you want all the detail!) as well as a few of the potential themes that might be connected with it.

A purple bauble, and a purple banner, and a mysterious sheen; The Expansion 2 panel looks kind of rich and magical. So what better explanation for this then the Kirin Tor, the organization of Dalaran Mages that has been the back bone of the pursuit of magical knowledge in the Warcraft universe? The trouble with this guess is that we have had a Dalaran inspired expansion with a heavy dose of Khadgar and the Kirin Tor very recently, in the Rise of Shadows expansion.

So perhaps if not the Kirin Tor and Dalaran, the purple bauble points to some other magical, purple place. Netherstorm certainly comes to mind when combining those 2 words. Like with Dalaran and the Kirin Tor however, we have had quite a recent expansion taking place in Netherstorm: The Boomsday Project. Netherstorm is also a part of Outland, where the current Ashes of Outland expansion takes place. So while possible this would suggest that this too is not as likely to be the expansion theme and place.

A more open minded guess as to what panel 2 might hint at lands us at the intergalactic race of the Draenei. The Draenei certainly are some of the more posh and high character members of the Warcraft universe, and the panel certainly has that kind of vibe. Perhaps the Hearthstone team would do something quite unique and take us back to the planet Draenor before it shattered into pieces and became Outland or even further back to the original world of the Draenei, Argus. Those worlds have yet to be explored in Hearthstone so there's certainly merit to thinking they might be now.

A very different race, that has been shockingly underrepresented in Hearthstone lore is the Night Elves. There's definite links to the color purple for the Night Elves (they are purple in some cases) and they also have a proud and rich history. There's even the rather frayed bottom end of the banner in panel 2, that might suggest combat or war, and the Night Elves have just had one of the most horrific events happen to them in the Warcraft universe, where during an assault on their lands during the War of Thorns, Sylvanas Windrunner set fire to the great World Tree that the Night Elves called home. This would make for an amazingly interesting Hearthstone expansion, even if somewhat more serious than usual.

The Ethereals are a race of techno-mummies, who's home planet K'aresh got destroyed by Void creatures. They are an enigmatic race and have long been a favorite to be featured in a major role in new World of Warcraft expansions. So far their role has never grown beyond being purveyors of sought after magic, often at steep prices. But Hearthstone would certainly be a place where Blizzard could stretch some creative muscles and finally give the Ethereals more story and depth. They certainly have the mystique to fit with what the expansion 2 panel portrays.

Lastly in our list of guesses there is a rather vague guess: The Void. The expansion 2 Panel's main attraction is it's purple bauble and the rather magical look it has. There's little in the Warcraft universe that's more magical and more associated with the color purple than the Void. But it is also a very wide ranging theme. The Void could mean the Old Gods, which have had their expansion in the past, though long enough ago that a return to the theme should not be dismissed.

There's also a chance that the Void is pointing to the Void Elves, and we might see a Void Elf centered theme. They are quite a new race in the Warcraft universe, having been outcast by the Blood Elves, but they have an even more likely claim to being connected to the expansion 2 panel than the Draenei or the Night Elves, through their connection to the void.

Lastly there's the Void as a force in the universe and the opposite force of the Light. This is a wildly broad topic that could be turned into an expansion in numerous ways. One of them would be the Battle between the forces of Light, lead by Anduin Wrynn and Prophet Velen and the forces of the Void, lead by the Void Lords, which is something that has been delved into a little bit in World of Warcraft, in particular in the Legion expansion. And you know who was the other person playing a major role in this storyline? None other than Illidan Stormrage.

Now, before that last line about Illidan being involved sets you up for too much hype: Blizzard very clearly said there was not going to be a connected story during the Year of the Phoenix, so even if Illidan shows up it is unlikely to be as a featured role or anything connected to Ashes of Outland.

As parting words, I want to leave you with what Hearthstone Dev Dean Ayala told us in an interview way back in February, which was published with the big media reveal of Ashes of Outland and the Year of the Phoenix. He said "All 3 upcoming expansions are distinctly different, they are all really cool and we’ve been wanting to do all of them for a while."

What do you think will happen in the next expansion?