A new GvG minion has been revealed, this time from a post on Touch Arcade. Say hello to the Shaman minion, Whirling Zap-o-matic. 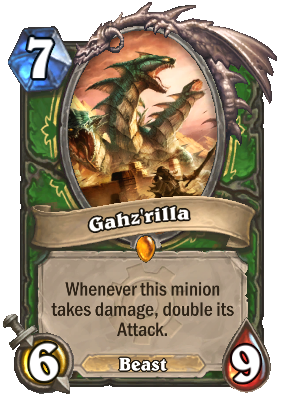 We've got all the currently revealed Goblins vs Gnomes expansion cards available in our card database.

We’ve received a lot of feedback regarding the initial action we took against players who were using bots to automate gameplay. One of the major concerns that you expressed centered around whether the offenders would get to keep their golden hero portraits.

We’ve discussed the situation amongst the team, and we agree that those found to be botting should not get to keep their golden hero portraits. We’ve decided that the number of wins associated with each class on the offending accounts will be reset to 0, which will also remove any golden hero portraits that were obtained on those accounts. We know this issue is important to you, and your feedback is extremely important to us as we explore issues like this for the first time in Hearthstone.

As we demonstrated again recently, rest assured that we will remain vigilant and Hearthstone accounts found to be cheating will continue to face permanent closure.