Saviors of Uldum has been out a few weeks, so we wanted to take you through some of the best cards that came out of the expansion. Today we will bring you all of the most plentiful Plague cards from Saviors of Uldum, in alphabetical order.

Some notes before we start: Plagues were introduced with Saviors of Uldum by Blizzard as "spells of ancient power wielded by the 5 League of E.V.I.L. classes (Priest, Shaman, Warrior, Warlock, and Rogue.) Affecting both friend and foe alike, plagues have a devastating impact when played, so time them wisely!".

These cards are an ingame expression of several devastating plagues that the League if E.V.I.L. unleashed on Uldum, resulting in us facing their manifestations, the Plague Lords, as End Bosses in the upcoming adventure Tombs of Terror. 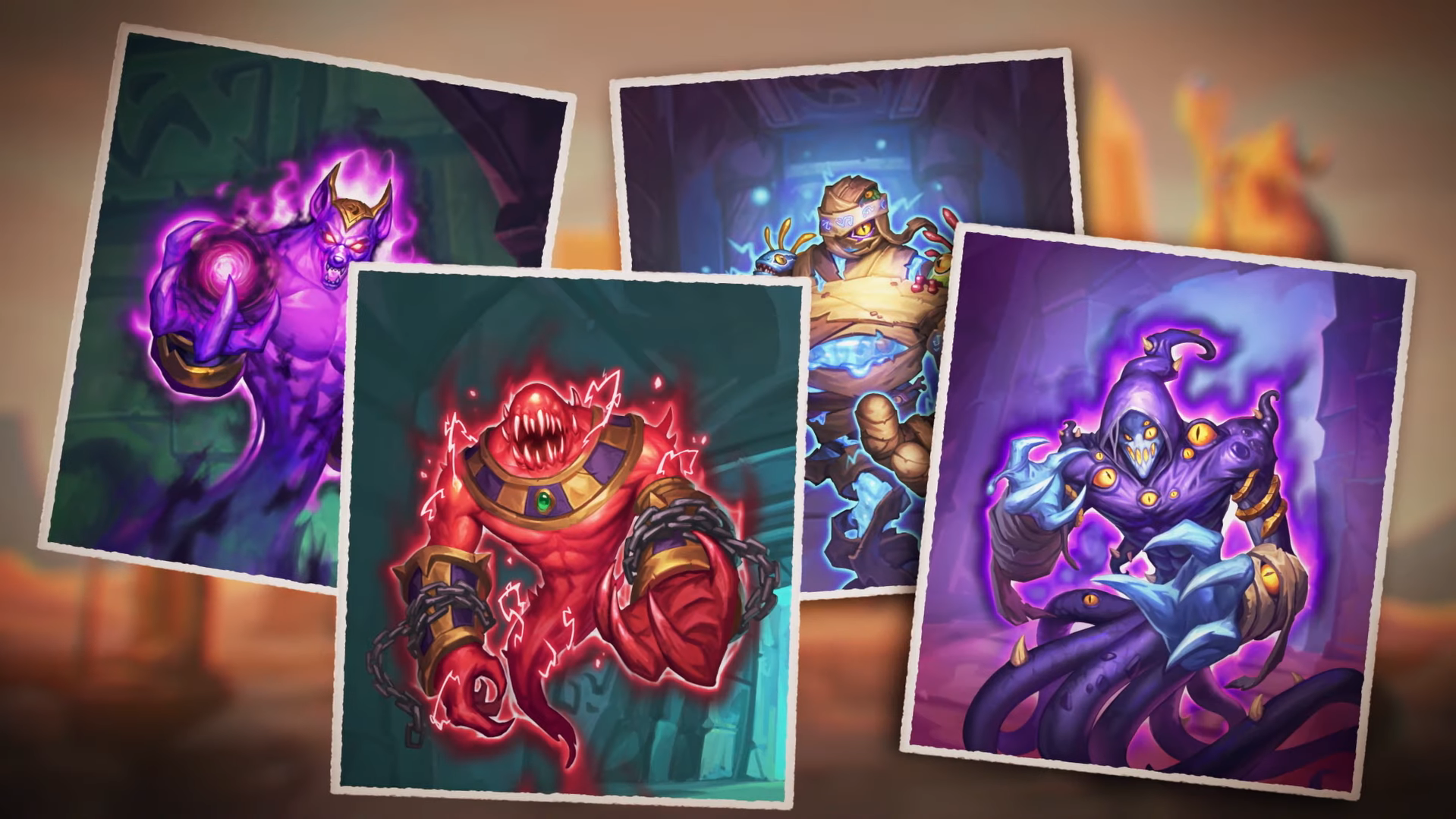 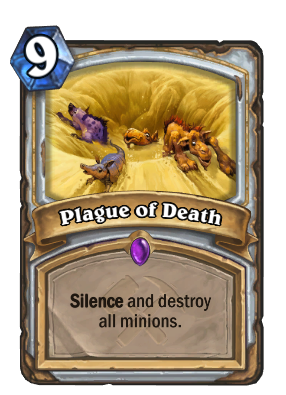 The Plague of Death is probably the best boardclear in the game. It's also among the most expensive, which means that, yes, you clear the board, but you can't play anything to get board control yourself. Which might just put you back where you were in short order. Then again, that's the problem with most big boardclears. At least Plague of Death doesn't leave any pesky Reborn or Deathrattle results behind.

It's always hard to tell just how good boardclears are in a deck, since playing them means you were already in a disadvantaged situation. So winning after playing a boardclear is tough to attribute. With Plague of Death we can at least say that it is featured in successful decks. And not just that, but it's quite a good card in Arena too, which is often an indicator of a card being good on its own.

So what then is the verdict on Plague of Death? It's situational, but in certain decks it's devastating, because knowing you are playing against it means you can't over commit. But not committing enough means you play right into the Priest's hand by letting them work towards their own win condition. Forcing your opponent to fear what you might do is a powerful thing to have in a deck. 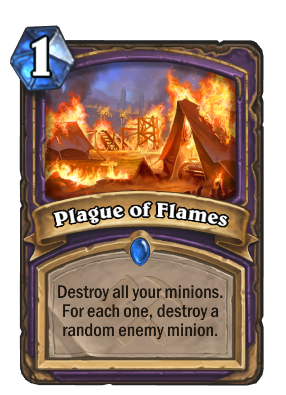 As you can see at the top of this article, the new adventure will feature Plague Lords. Every plague card has it's associated plague and it's associated Plague Lord. Not Plague of Flames though. It would have been kind of hard too, because a manifestation of flames would just be a Fire Elemental of some sort. Been there, fought those in another adventure. Glad we are getting something new.

The Plague of Flames card though. It's so cheap! And with Warlock's ability to easily put cheap minions on the board with cards like Rafaam's Scheme, it can be very effective too. With Plague of Death you have no chance to build any board yourself. Plague of Flames let's you build back all the board you would want, making it a sweet tempo play.

To be fair, the downside of having to sacrifice your own minions balances the card quite well in value decks since running cards that bring out cheap minions is not very efficient and doing a 2 card board clear is not very efficient either, so it's not crazy powerful. It's just a decidedly average board clear that plays into the Warlock flavor very nicely. It does very well in Arena though! 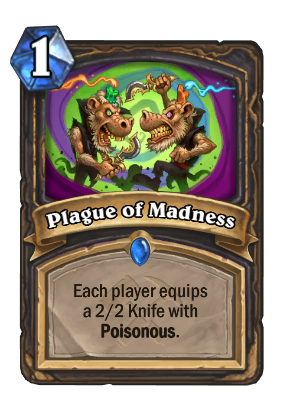 Originally Plague of Madness was going to be something different. Blizzard dev Mike Donais stated: "one of the designs I remember is "Give all your minions poisonous" and that was really good, but it was often a full board clear and that's not something that we liked them having". Them being Rogues.

After that they went with the current itteration, and it's frankly flat out bad. Some cards are bad in constructed, but at least have the redeeming quality of being good in Arena. This card has none of that. There is simply no way that a card that gives your opponent the exact same advantage that you get, while you pay the mana for it, is going to produce a valuable card for your deck.

Question that we have been unable to shake is why Blizzard chose to give both players the weapon. Why not only give the Rogue that plays it a weapon with poisonous? Maybe adjust the mana cost if it's too powerful. For some reason they didn't do those fairly obvious things and we somehow ended up with this version, which pales compared to the Plague cards other classes received. A missed opportunity. 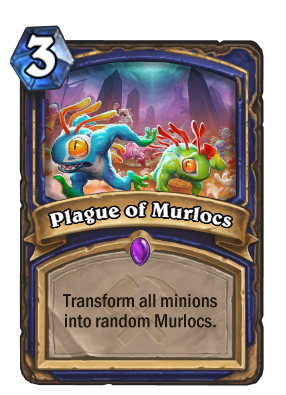 The Plague of Murlocs is not a unique card. We have seen a similar effect before, in Shaman too, with Devolve. The cards get transformed and not destroyed, meaning no Deathrattle or Reborn triggers go off. Plague of Murlocs has a similar downside too, the newly transformed minions might end up being quite a bit more powerful than you had hoped for when you played it.

And so Plague of Murlocs is a risky play. If your opponent ends up with a Murloc Warleader things might end up going really badly. Then again, if you were facing 2 or more high health, high impact minions before (with deathrattles for instance), then you still take the Murloc Warleader gladly as the lesser of 2 evils.

So how good is the card? More than any other card among the Plagues, it matters when you play it and what your opponent and you had on the board. Situationally it can be great, situationally it can also be terrible, regardless of precise RNG with what Murlocs you end up with. Like the other Plagues though, this card is better in Arena than it is in constructed even. 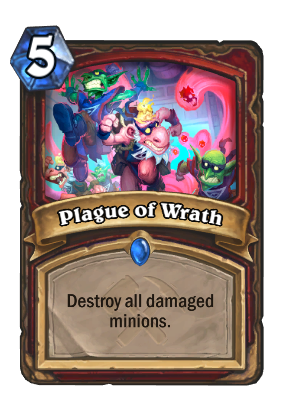 People have been experimenting with Plague of Wrath since the start of the expansion. Control Warrior when it was dominating was often running 1 or even 2 copies, depending on precise match ups it saw in the meta.

All the plague cards have some kind of downside to them and for Plague of Wrath this is that minions need to be damaged. This can be problematic if cards have been hidden behind taunts or if you have no minions on the board to damage your opponent's minions. Then again with Warpath and Brawl Warriors have more great tools to board clear, as well as multiple tools to single target clear, like Shield Slam, so it's not like Plague of Wrath is their only option.

Plague of Wrath, much like its spiritual predecessor Sleep with the Fishes, is a situational tool, but can in those situations be very effective. It's an average card in Arena, where conditionals on cards are often harder to achieve.

That's it for this Saviors of Uldum Plague card review, check back for more reviews in the future.