Saviors of Uldum has been out a few weeks, so we wanted to take you through some of the best cards that came out of the expansion. Today we will bring you all of the most diligent Discover cards from Saviors of Uldum, in alphabetical order.

Some notes before we start: we left out Frightened Flunky since we have featured it in the Terrific Taunts post we did. Also not mentioned here, but of note in this expansion, is the card Dwarven Archaeologist which reduces the cost of cards you Discover by (1). Since it is not itself a Discover card however, we left it off the list. 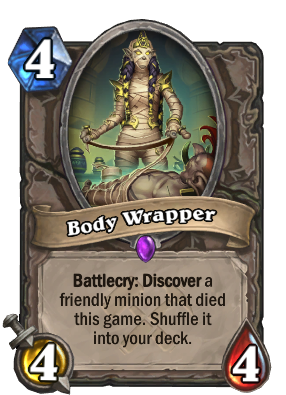 For most people Body Wrapper will feel like a neutral Eternal Servitude with a body attached. Given how popular that card is for Priests in Wild, it's not crazy to have expected Body Wrapper to be successful too. It hasn't really played out like that however.

Maybe it's because other classes lack the support for the card, maybe it's because the card doesn't have more immediate board effect but fact of the matter is that there's not really been a deck built with this card that would not also be successful without it. Even in Arena, where card generation is at more of a premium, the card fails to be more than average.

Perhaps some greedy deck will come along that puts this card to good use, and make it a popular inclusion, but for now it's niche seems to be mostly in Priest decks with similar effects. 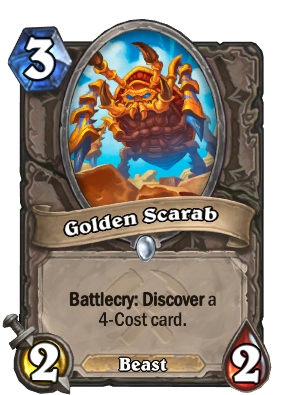 In a nice call back to the League of Explorers adventure, Blizzard introduced Golden Scarab which is Jeweled Scarab's bigger brother (or sister, hard to tell with scarabs). Either way it introduces the same mechanic, with increased stats and costs.

Not unlike their sibling, Golden Scarab is kind of slow and bad on its own, but shines when you can draw good situational cards from it. It finds itself in a different meta game however. Back in LoE card generation was not that common and Discover was a new mechanic. It made Jeweled Scarab a uniquely useful card in greedier decks, which is not so much the case for Golden Scarab. They both are very nice cards in Arena however.

So while Golden Scarab lacks the more universal appeal it will still shine in Arena and that's okay. Not every card has to change the way we play the game.

Of note here, if you click the link below to see the Golden Scarab Discover possibilities, make sure to set the filters for what class you play, and if you play standard or wild.

All Golden Scarab Discover possibilities in our card database 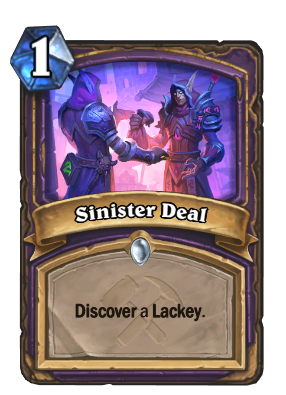 Lackeys have been some of the more interesting introductions in Year of the Dragon and Sinister Deal makes getting the Lackey you want in a specific situation slightly less RNG-filled.

With Warlock getting some Lackey specific mechanics in Saviors of Uldum, through Dark Pharaoh Tekahn and EVIL Recruiter it made sense for the class to also get some on demand, low cost, Lackey generation. This card fills that role perfectly. It's a usual inclusion in many Zoolock decks that employ Lackeys and those decks are pretty successful. Due to the quality of Lackeys in general, it's even become quite a nice card in Arena.

The verdict here is simple, much as the card itself. It has a clear niche and does what it does well, and gives much needed support to some deck defining cards. A very solid addition to the game.

All Sinister Deal Discover possibilities in our card database 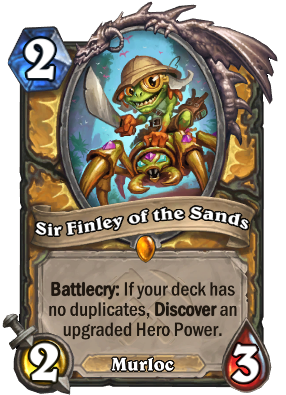 Fact: Sir Finley of the Sands is a usual inclusion in one of the most successful current Meta decks. Also fact: He's mostly in there for being a Murloc with decent stats and will rarely be played like Blizzard had intended him.

Strange how the Hearthstone card meta plays out sometimes. In this case it turns a card that was likely not powerful enough on its own to be worth building around into a card that supports a meta defining deck on ladder. But that's not the only place to play cards. With Arena often being somewhat easier to build a Highlander deck, Sir Finley turns out to be quite good there, even if there too he's not meta defining.

It's not out of the question that a good Highlander Paladin deck might still emerge, but for now we can be happy that Azeroth's most intelligent Murloc has at least found play in several places.

All Sir Finley's Discover possibilities in our card database 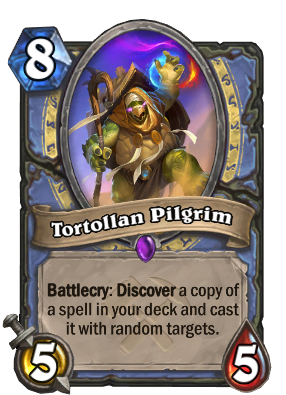 Tortollans can live very long lives and many of them are quite old fashioned so it would not be a stretch to think that maybe Tortollan Pilgrim is thinking of times past, and humming "Glory Days" to themselves. The glory days in question being, oh, 10 whole days ago, when they were part of one of the most successful decks in the post release meta.

Yeah, time to take off the rose tinted goggles and face reality. With the nerfs, Mage decks took a hit, and with them so did Tortollan Pilgrim. Mage decks using the card are average at best it seems, and the randomness of deckbuilding in Arena means that he's not always that useful there either.

So the conclusion about this card is that it does what it does well, and if the rest of the deck can have success then Tortollan Pilgrim can help. Currently though it's wishing it was still in the past. 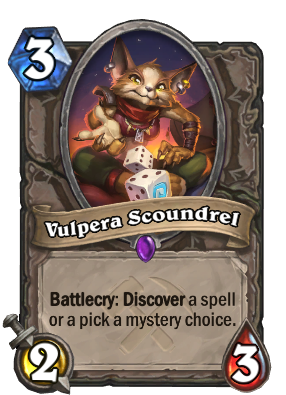 The Vulpera Scoundrel introduction in Saviors of Uldum came along side the popular Highlander cards, like Dinotamer Brann and Zephrys the Great and it has found a fit in those Highlander decks by being a versatile if somewhat RNG-plagued answer when looking for solutions.

The unique thing about the card is that it gives you 3 normal Discover choices, and then a 4th Mystery Choice!, which is hidden and totally random. It is this last option that makes the card also a popular inclusion in RNG decks, like Randuin and Casino Mage.

Not only is Vulpera Scoundrel a pretty good card in ladder decks and a fun card in fun decks, it's also a very good Arena card, where it's spell generation can be game changing.

All Vulpera Scoundrel Discover possibilities in our card database 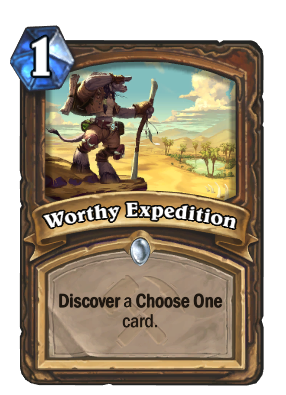 For our last card today we have Worthy Expedition that much like Sinister Deal, mentioned above, provides some on demand card generation for a new Legendary in Saviors of Uldum. In this case the Druid Quest Untapped Potential.

It took a while for the Druid Quest to really find its groove, but since the nerfs there has been a steady rise in its success and Worthy Expedition helps by providing the extra Choose One cards that the situation demands. And not only is it a very useful card when used with the Quest, it's a useful card in general, since many Choose One cards are quite powerful and having a low cost, on demand, choice for whatever situation you are in makes the card work in just about any Druid deck, including Arena decks.

It is very likely that Worthy Expedition will see use in Druid decks not just now but in the future too, given the usefulness of card generation and the ability to help more than just the Quest archetype.

All Choose One Discover possibilities in our card database

That's it for this Saviors of Uldum Discover card review, check back for more reviews in the future.