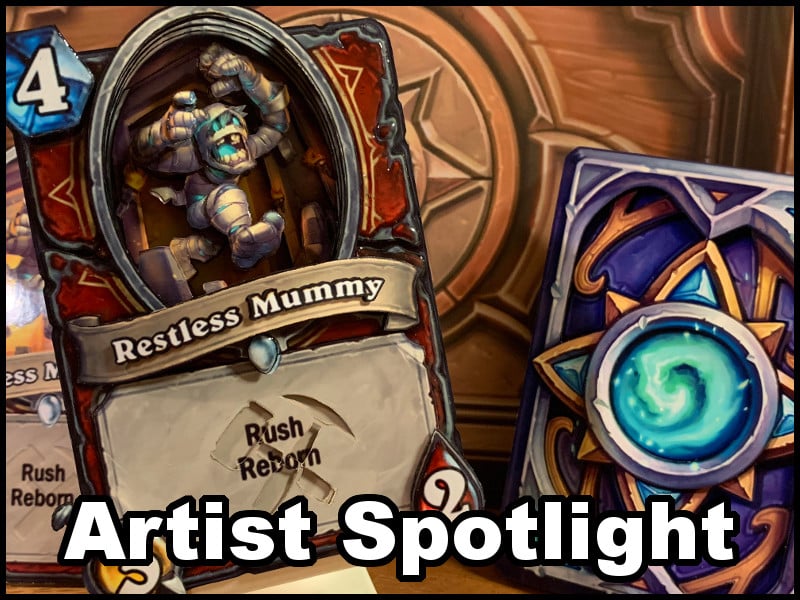 In today's Artist Spotlight we bring you some of the art and background story of Jun "Jorge" Yamamoto; as well as a giveaway of one of his amazing pieces of shadow box art!

In the past few weeks, before the Saviors of Uldum launch, if you watched any of the card reveal videos you may have seen in some of them that Blizzard did not just send the streamers a pixel card to reveal, they sent them an actual physical representation of the card as well. Those cards were made in what is known in the art world as "Shadow Box art", a way to shape flat 2-dimensional pictures into lively 3-dimensional objects.

One of the people creating these shadow boxes for content creators was Jun "Jorge" Yamamoto, today's featured artist.

Jorge hails from Yokohama in Japan and spends most of his time either at his day job or with his wife and 3 children, but in his spare time he loves to game, just like most of us. "I played each series of Diablo" he told us, his first introduction to Blizzard games. "And of course, I love to play Hearthstone. I’ve played HS since it’s release on PC" he added. "Problem is, I’m now too busy with this artwork and barely have time to play games, no more than doing daily quests."

Being called an artist is a new experience for Jorge, and not one he is used to yet.

Quote from Jorge »
I feel very odd being called an “artist”. I’m just a usual father and was never an artist during my life, I like making things myself, though, like cooking and DIY. I’m pretty good at carpentry and made things like wood decks, a dining bench, and a desk for my children.

It's all very modest, but a brief look at the things he's produced tells anyone that he is an artist and one that can be proud of his work. 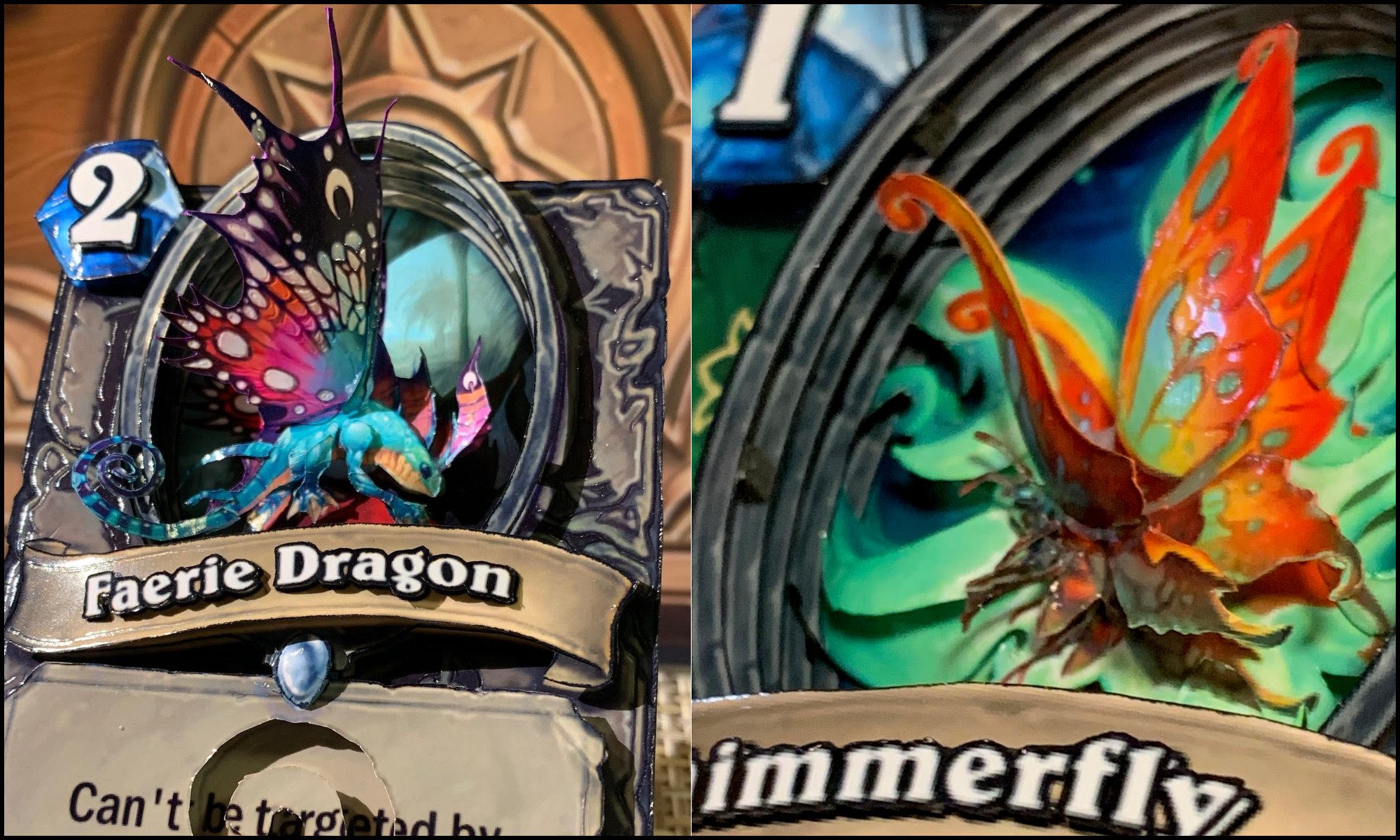 So how did Jorge end up making shadow box art? "I found a piece of artwork made by a Japanese person on Twitter and it struck me. I wanted to try it myself and that was the beginning," he tells us. "I just kept making one after another without stopping since I have started. I made about 20 of them (without counting card backs) including official ones up until now."

Quote from Jorge »
It is basically made of photo paper. I print the card from my inkjet printer, and cut, round, and assemble it to 3D. I cut the paper with art knife and use some tools to manipulate, such as tweezers, metal sticks. Sometimes I use resin material for some parts to make it look better. The basic technique is to define layers, and overlap each layers one by one. If you increase layers, the card will be thicker and look more “3D” but requires more time and intricacies.

I usually need 7-8 hours to finish a piece, and it depends on the difficulty of the illustration and number of layers. I spend large portion of hours on non-illustration part such as the frame and decoration parts (such as attack, health crystals) since these things make huge difference on the finished art.

When we asked him if he had a favorite piece he worked on, he doesn't hesitate. "Hack the System," he answers, the card that ended up being revealed by Trump. "It was very difficult one in terms of the illustration, and I could tell with the first glance when they gave me the card information. So, I saved it till last, and kept thinking how I could make it while making the other 6."

So how did he end up creating shadow box art for the Saviors of Uldum expansion? Many artists around the world would love a chance to do the kind of thing he did. How did it all come about?

Quote from Jorge »
After I made several pieces, I opened a Reddit account to post my works. Blizzard found it and contacted me. I thought it was someone with a personal interest in buying one. As I had thought it was a personal inquiry, I was like, “what are they saying? And then I understood, it wasn’t their personal interest but Blizzard want me to do something for them. They even told me that everyone in their office loved my artwork! You must be able to imagine how excited I was at this moment!.

We can definitely imagine, anyone would be. In total, Jorge created 7 fantastic pieces for Blizzard to use in the Saviors of Uldum reveal season.

We'll end this article with Jorge's contact information and the giveaway of one of his art pieces, but as a final look at his art, watch this fascinating time lapse video he shot while creating the Faerie Dragon card, shown earlier in the article.

Interested in one of Jorge's art pieces, and unfortunate enough not to win our giveaway? Here's how you contact Jorge directly to discuss what card he can make for you:

We can highly recommend following these accounts even if you are not interested in commissioning a piece, because Jorge posts about his art on them too, which always brightens up the timeline. 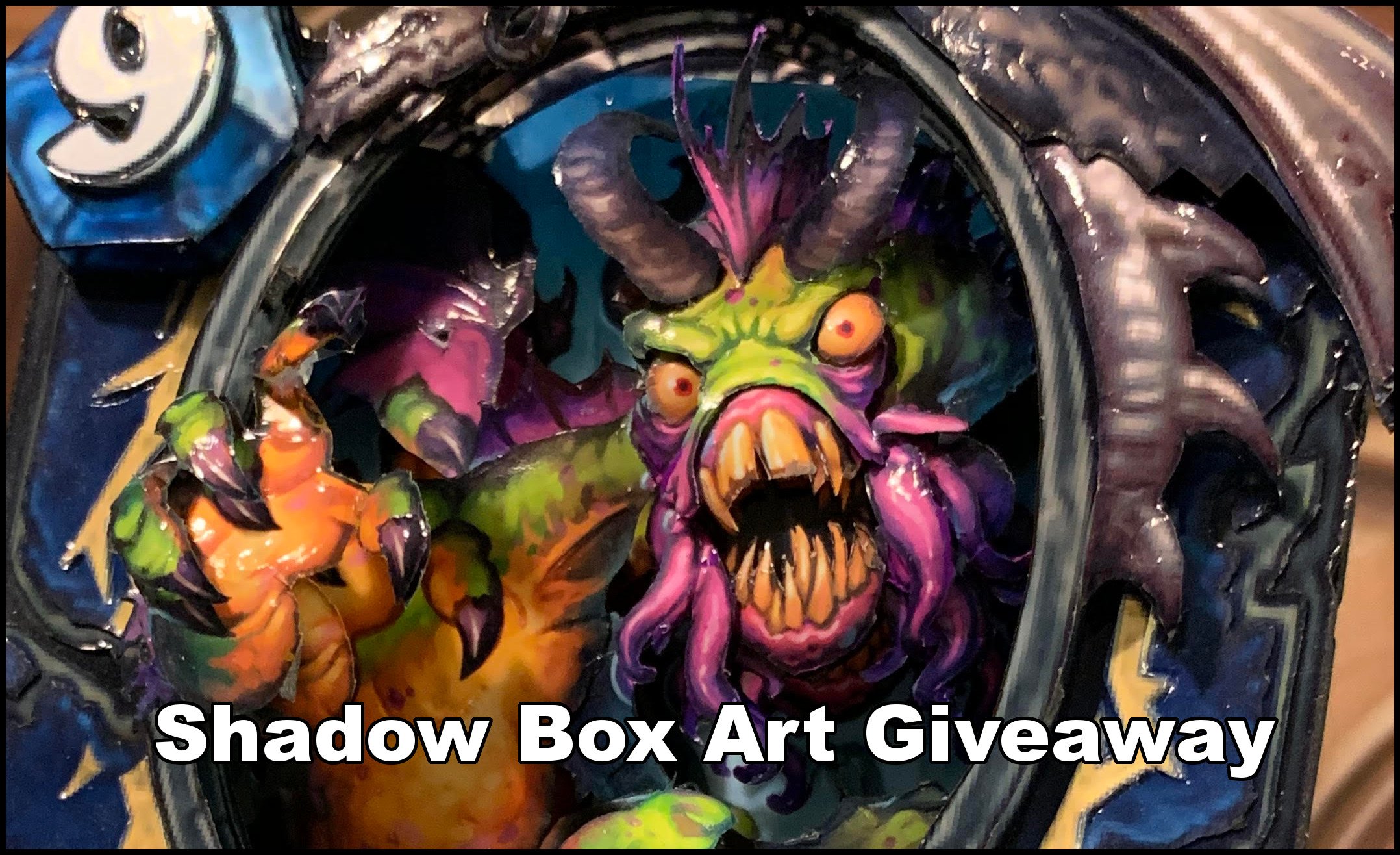 Did you love the art displayed in this article? Do you want a Shadow Box art card of your very own? You are in luck because Jorge has kindly agreed to make one for just one lucky winner.

What do you need to do to win?

The giveaway is hosted through our GiveawayBot on Discord, all you need to do to enter is to click the 🎉 reaction underneath the post in the #announcements channel! 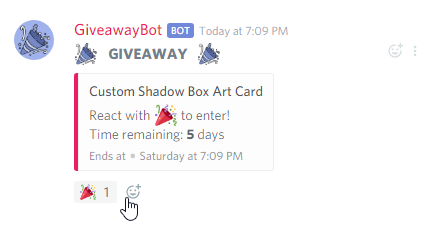 Thanks for reading and good luck everyone!