We're in the last stretch of the Year of the Raven which means next year, in April, we're going to see some expansions rotate out. Today we're talking about our favourite moments from Kobolds & Catacombs.

Kobolds was an interesting expansion for me because it was the first time that year I wasn't crazy excited about anything. Being someone who really likes Mage it was cool to see Elementals gain even more support, and the addition of the RNG goddess Deck of Wonders probably made the entire expansion for me, but nothing else was an immediate, personal stand out. I played some memes, Spell Hunter was fun to play around with, and there definitely was a bit of fun with Mill Rogue, but that was it.

Definitely have some classics though from the set - Carnivorous Cube, Corridor Creeper (so bad, right? :P), that stupid Spiteful Summoner, the soon to shine Level Up!. It's a shame that we had so many ways to cheat out cards though, I feel like it hurt the game's health overall for the next year and was a primary source of players becoming frustrated, some streamers giving up on the game, and those cards unhealthily remaining as staples.

With that said, even though we had some strong cards, it didn't quite hit the power level we saw from Un'Goro and Frozen Throne which may have actually made it the best set from that year from a longevity standpoint. Death Knights and plenty of things from Un'Goro have plagued us all year whereas I don't think the same is true for as many things from Kobolds & Catacombs. Yes, we probably should have seen some nerfs, but the things that were potentially really scary (legendary weapons) and should have been very excited for were overall a disappointment.

That's just me though. I could be in the minority and if you disagree, I'd love to read what you think in the comments!

Oh yeah, did anyone else remember when Dragon Keleseth Priest was a thing. Absolutely hilarious.

Linkblade91 - The Bear and the Maidens Fair

Can any story about Kobolds & Catacombs really top the fact that Spell Hunter worked out? Rhok'delar and To My Side! are the feel-good movie of the expansion: written off as jokes, only to overcome the memes and the bullying on their way to glory, riches, and a certain Queen song blaring at full volume. Essentially The Mighty Ducks of Hearthstone. Combined with Kathrena Winterwisp and her Big Beast deck, the Hunter went from one of my most-hated classes to my absolute favorite. All hail Queen Misha, long may she reign! 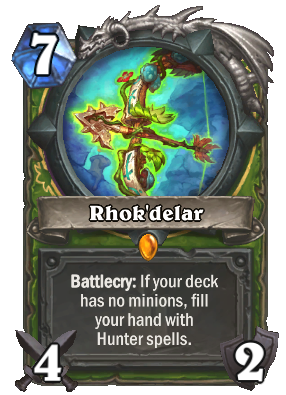 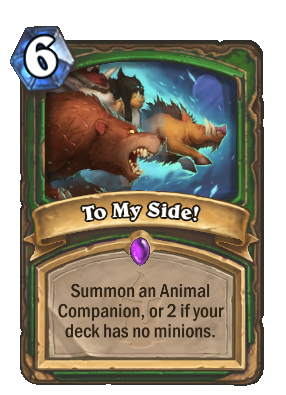 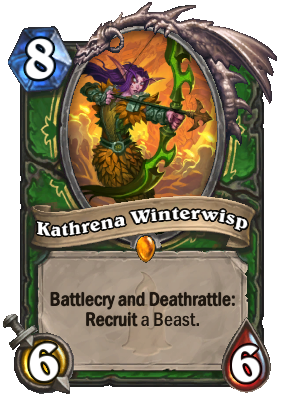 Speaking of which, Marin the Fox may think himself the headliner - having made his appearance known first - but the women of the dungeon were the true highlights of the expansion.

Kathrena united the Big Beasts under her banner, joining My Collection but a single day after with my pull of King Krush from a Tavern Brawl pack. A couple Charged Devilsaurs later, and I was one of the first to lead the Charge! Lynessa Sunsorrow proved herself the champion of Quest Paladin, and I crafted the deck without regrets; never figured we'd come back to it with Rastakhan's Rumble, but I ain't complainin'. Sonya Shadowdancer convinced us The Caverns Below needed yet another nerf, so pulling a golden copy after the first hit worked out for me in the end. Dragoncaller Alanna burned the board to the ground time and again - much to my amusement - while Rin, the First Disciple trolled her fellow Control decks time and again...much to my annoyance. Oh and let's not forget about Zola the Gorgon, although I'm running out of anecdotes.

Neonangel - I Can't Hold All These Cards

Kobolds offered several cards that shook things up on the Constructed scene.  So much, in fact, that a couple of cards have already been nerfed.  I’m talking about Corridor Creeper and Level Up!.  Corridor Creeper was absolutely amazing as a 5/5 minion and could easily be used by any class since it was a Neutral card.  After the nerf it was barely playable since it lost half its Attack.  Level Up! wasn’t astounding by itself, but once “Odd Paladin” became popular it had its cost increased so it could not be included in that deck due to the speed at which it allowed players to overwhelm their opponents. 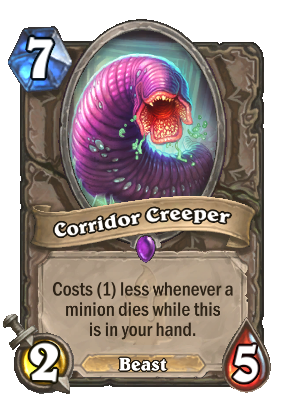 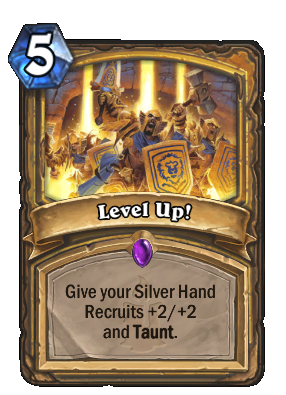 The new Spellstones were pretty cool, but the Lesser Amethyst Spellstone and Lesser Emerald Spellstone really stood out against the rest.  Both were incredibly easily to upgrade and Hunter could simply run over you with a horde of wolves while Warlock could remove your largest threat and gain back a ton of Health.  The are currently staples in decks like “Secret Hunter” and “Cube Warlock”.

Priest got a great new AoE with Duskbreaker, which still shows up in “Dragon Priest” and most Control decks.  Priest is typically slow and this card made players fear turn 4 when playing against them, especially if they were playing an Aggro deck and had filled the board with small minions.

One of the other great cards from the set has got to be Fungalmancer. Being a Neutral card, it showed up in lots of different decks and according to HSReplay it’s currently in about 16% of decks right now (it was almost 25% at the start of the month).

Perhaps the biggest change that Kobolds & Catacombs brought to Hearthstone was the new mode of Solo Adventure content with the introduction of Dungeon Runs.  The was the first expansion that Blizzard moved away from the linear dungeon model they had been using and were able to create a format that was fun, challenging, and offered a lot of replay value.  It is still being used in new expansions and offers players something different to do for a change.

I look forward to considering Rastakhan’s Rumble next year and thinking about what memorable changes it introduced to Hearthstone!

When looking back through the cards introduced in this expansion, I was shocked at how many of them have left a memorable impression - it really does go to show that this expansion increased the power level of the game by a lot. Even ignoring the nerfed cards, this expansion gave us entire decks like Kingsbane Rogue, Spell Hunter and the bones of Hadronox Druid - not to mention Healing Rain, Murmuring Elemental and Grumble, Worldshaker which would eventually give us Shudderwock Shaman. The class I will remember most, however, is Warlock. 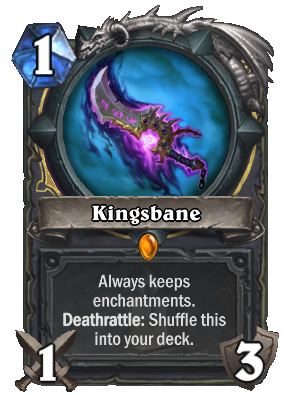 Warlock got a whole suite of fantastic cards in this expansion - even the duds Hooked Reaver and Cataclysm have found uses in Arena and Adventures respectively. Zoolock enjoyed the addition of Kobold Librarian and Vulgar Homunculus, but it was Control-style decks that won out - picking up the Librarian, they also got Dark Pact, Lesser Amethyst Spellstone, Possessed Lackey, Voidlord, Skull of the Man'ari and Rin, the First Disciple. Think about how insane that is - 70% of the new Warlock cards were used in one new Warlock deck, 80% over just two decks. It's no wonder they were so oppressive.

Though it wasn't the better version, the deck running Carnivorous Cube - ever so creatively named Cubelock - was by far my favourite, simply because it was so synergistic. You wanted to kill your own minions so often, and had so many ways to do so. I was lucky enough to happen to stumble into owning almost all the pieces for the deck straight away in the expansion - only missing the optional Rin - so I was running it straight away. I will be the first to admit, it deserved those damn nerfs, because it was just so good. The best part about it was that Carnivorous Cube also found a home in my favourite jank deck of the expansion, Tiger Druid. Filling a board with Astral Tigers after playing a N'Zoth, the Corruptor was just so fun. It also functioned as a more fair feeling 'un-fatigueable' deck, compared to the often rage-inducing Jade Idol.

Beyond that, I really feel like Arena was given a lot of love this expansion - though whether that was healthy for it or not is debatable. After getting powerhouses in Bonemare and Cobalt Scalebane in the previous expansion, the train just kept on rolling with cards like Cursed Disciple, Sleepy Dragon, Violet Wurm, Dragonslayer, Stoneskin Basilisk; there's honestly too many to list them all.

I won't miss a lot of the cards in this expansion in Standard - they were too swingy, too synergistic to be fair in such a limited format. I'll be Cubing things all day in Wild though.