Predicting a card's usefulness or popularity isn't always easy. Sometimes, cards that seem like they will be a surefire hit fizzle out in the blink of an eye. Other times, cards that got little to no buzz upon reveal steal the show weeks or even months later. Which brings us to this list — the most overhyped cards from Boomsday Project.

Before we get started, I just wanted to make some important notes:

We've also included some decks that are running these cards, if you want to check them out and decide for yourself if they live up to the hype. Okay, with that out the way let’s dive right in! 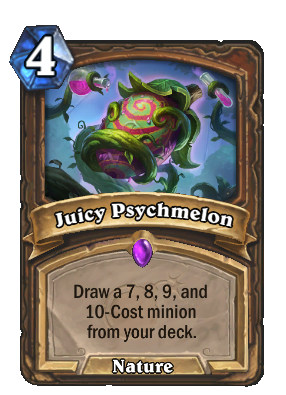 This card is doing well in wild but in standard, not so much. There was a lot of pre-launch hype about this card but in the end the high mana cost for the very specific card draw just didn’t pan out for most players. It's seen a steady drop in popularity and a pretty steep drop in win rate, significant enough for it to be included on this list. As I mentioned, wild is a completely different story for this card. It’s doing really well there, but this article is only concerned with standard mode so don’t @ me. This card was talked about A LOT before launch. It even made many “Most Anticipated” and “Top Cards” lists as well. But did it live up to all that hype? Not really. In the end, the randomness of the mechs revived made this card less playable than initially anticipated.

Not only has the popularity of this card been in a steady downward trend since launch, but its win rate has as well. The win rate got off to a solid start right around launch, but it has been hovering in and out of the red (below 50%) ever since. Off the bat, this Rogue card looked like it was going to be mega-popular. Factoring in its low mana cost and synergy with sister card Pogo-Hopper (and basically a helluva lot of other Rogue cards that rely on playing multiple copies of the same card), it looked like Lab Recruiter was going to be a winner.

You’d think this would mean a big resurgence in the dreaded quest rogue, right? Well, it is played a lot in quest rogue decks now, that much is true. But when you look at it overall not only is it just not being played that much, it’s also doing pretty poorly when it comes to win rate, having been below 50% its entire lifespan. This card didn’t necessarily get a lot of pre-launch hype. Let’s be real, it’s not flashy enough for that. But this steady 5 mana 5/5 saw a huge surge in popularity once the expansion launched.

The magnetic mechanic on this card seemingly gave it a big advantage. You could play it on a mech already on the board and have the same effect as getting +5/+5, Magnetic really does open up a lot of new ways to play around with cards and their synergy and I for one am thoroughly enjoying it.

Despite all that however, this card has seen a steady decline in popularity and win rate since launch. As the meta refines and people find more specified decks to play with, some cards just get left behind despite how good they seem at first blush. Wargear is one of those cards. 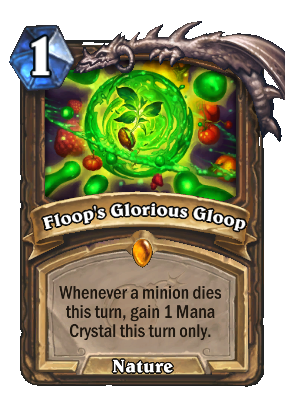 Unlike Flobbidinous Floop himself, which has remained popular, his gloop just couldn’t make the cut. This is another card that had a lot of pre-launch chatter surrounding it. It seemed like people were excited about it when it was first revealed, but today it's simply not seeing much action.

The thing about this card though, is that it actually has quite a good win rate. Sure, it does require some set up to maximize the benefit, but I'm surprised that it isn't being included in more decks. What do you guys think?

With that we’ve wrapped up our list of the most overhyped cards in the Boomsday Project expansion! If you've got the cards already, I encourage you to try out some of these decks featured in the article. Maybe we can turn some of these cards around? With Hearthstone anything is possible. The least popular cards now could be the most popular cards in a few weeks. Speaking of which...make sure to tune in next time for the most underhyped cards.

Which cards were you most anticipating only to find they fizzled out when you actually got your hands on them? Were you surprised that Mecha'thun wasn’t on this list? Are you mortally offended that we’ve included one of your fave cards here? Let us know in the comments below!