You should get used to hearing about Spellstones, the new mechanic Blizzard believes will radically influence the deck-building process for all nine classes — whether you are modifying an existing archetype or conjuring something novel.

When Kobolds and Catacombs drops, each class will have a unique Spellstone card to play with. Each unleashes a powerful effect in keeping with the theme of the class. The Hunter Spellstone summons beasts, the Mage Spellstone adds random spells to your hand, and so on. When you hold the Spellstone in hand and meet certain conditions, its effect becomes more powerful and remains its original mana cost. This upgrade can happen twice. By this time, theoretically, the upgraded Spellstone effect will be worth the cost of building your deck in part around it. These powerful new cards are Rare, too, so two can be included in each deck for only 200 dust.

Some specific interactions are still unclear, but that didn’t stop us from dreaming of the effect that Spellstones will have on existing decks, the archetypes they may well spawn, and insane combos to try on December 7th. So in the lead up to Kobolds and Catacombs, indulge us in a bit of speculation, then let us know how you plan to spend those first few experimental days trying to beat Razakus Priest. The Lesser Sapphire Spellstone summons a copy of a friendly minion for seven mana. If you manage to Overload for 3 while the Spellstone is in your hand, it will summon two copies when played. Save it and Overload for another 3, and you’ll summon three copies — giving Control Shaman advocates, I believe, another card full of false hope.

Evolve Shaman decks have done well in the Knights of the Frozen Throne meta. In Wild, Aggro Shaman remains a force. But these have been the only viable options for Shaman for a while, and a lot of players are clamoring for the tools to create a Shaman deck that doesn’t rely on RNG evolutions or an army of early minions.

As of right now, Jade Claws is the only Overload card included consistently in the most competitive decks, and it’s pretty difficult to justify overloading with other cards in today’s meta. I think we can expect Shaman to get a makeover, but I’m not so sure Big Shaman, Taunt Shaman, or some variant of Control Shaman will be viable. The class simply doesn’t have the tools to compete in the very late game against Priest or Druid — or even Warlock, for that matter.

But if it does, the Sapphire Spellstone will be a component. And it’s been awhile since we have complained about a four-mana 7/7, hasn’t it? Imagine four of them for 11 mana total. The pieces for a new, control-oriented archetype are there: White Eyes, Earth Elemental, Snowfury Giant, Flamewreathed Faceless, Ancestral Spirit. But the proliferation of board-destroying AoEs — Psychic Scream, Duskbreaker, Dragonfire Potion, Defile, Twisting Nether — will keep this beefy bunch of cards from being a dominant force. Grumble, Worldshaker may be capable of generating crazy amounts of value with N'Zoth, the Corruptor and the Spellstone, but Razakus Priests will find their combo too quickly and Jade Druid can go infinite with Jades and the new Astral Tiger. When Raza the Chained goes to Wild in April, perhaps this will be a different discussion, but until then, Control Shaman will not find much success in the Standard metagame.

Ladder viability aside, we’re excited to see the highlight reels: In Wild, an Emperor Thaurissan reduction for 1 on both the Greater Sapphire Spellstone and Leeroy Jenkins is worth 24 points of burst damage. If a Malygos sticks for a turn, a Greater Sapphire Spellstone and two Lightning Bolts would deal 46 damage. It’s very hard to get Shaman minions to stick, but it will happen, and we’re here for it when it all comes together. 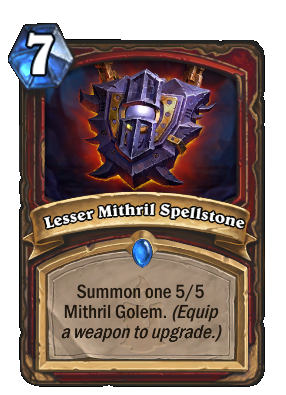 After what felt like an eternity of ladder dominance, Golakka Crawler and an AoE renaissance has kept the power of Pirate Warrior at a dull roar. Control warrior hasn’t been a thing in a while, but some have found success with Dead Man's Hand decks that generate infinite value.

The Problem: The Mithril Spellstone does nothing to contribute to either of these gameplans.

The payoff simply isn’t worth the investment: equipping weapons to push tempo works in Pirate Warrior, but Pirate Warrior wants to curve out, not hold a Spellstone in hand. So far, the Spellstone isn’t helped by anything new in the set, either.  In some other Warrior archetype, even upgrading the Spellstone to summon three Mithril Golems will likely be too slow if the meta continues to value tempo. The stats also leave the Golems open to Dragonfire Potion on 6, Psychic Scream on 7, and Shadowreaper Anduin on 8. If the Mithril Golems were 4/6s, we would be having a different discussion. But when it comes down to it, in the best case scenario, it’s a losing play against the most popular deck in Hearthstone and an excruciatingly slow play against the rest. 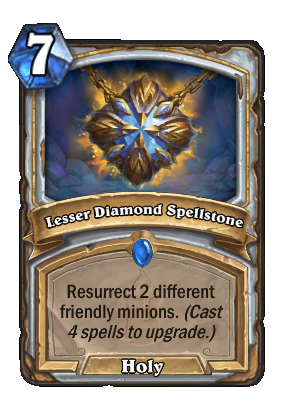 Unless the meta undergoes titanic shifts that counter Priest, we can rightfully call this Spellstone broken.

No other Spellstone so clearly plays to the strengths of a deck archetype quite like the Diamond Spellstone. Jammed into a current Big Priest list, players could resurrect Ysera, The Lich King, Obsidian Statue, and Y'Shaarj, Rage Unbound — a whopping 26/38 worth of stats spread across four bodies, even after their opponent dealt with them once or twice — for just 7 mana. Decks struggle to find enough removal for Big Priest as it is, and the Diamond Spellstone gives Priests yet another out. It’s extremely powerful against even, say, Control Warlock’s double Twisting Nether and double Siphon Soul. And don’t forget that half of Big Priest lists are made up of spells that cost 4 or less, making the probability of upgrading both Spellstones twice rather likely. That seems, in a word, unfair.

With the addition of Duskbreaker, Dragon Priest may well make a comeback. Duskbreaker would crush the momentum of aggressive decks just before the all-too-important Drakonid Operative turn. Dragons like Ysera and Bone Drake could give a deck like this viability into the late-game, and with enough spells to trigger the Spellstone and perhaps Dragon Soul, the new legendary Priest weapon, control matchups become even more favorable. This might be an archetype to keep an eye out for. Or perhaps players will jam dragons into the Razakus package for tempo. Either way, we think the Spellstone has the potential to play a big role in either, used as a means to reload the board after players have exhausted their opponent of answers.