A new Legendary Paladin Weapon card has been revealed by IGN! 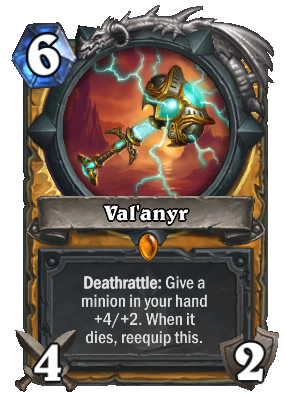 Val'anyr, Hammer of the Ancient Kings was a Mace created by the Titans and given to the first Earthen King, Urel Stoneheart. The weapon was used to create and give life to the Earthen, a race of proto-beings created by the Keepers to help shape the subterranean regions of Azeroth. During a war between the Earthen and Iron Dwarves, Val'anyr was shattered into fragments.

In World of Warcraft, Val'anyr was added to the game in Patch 3.1.0, Secrets of Ulduar. Players were able to collect Fragments of Val'anyr from the bosses of Ulduar (the Prison of Yogg!) with drop rates being as low as 3%. A player who was able to collect 30 Fragments was able to bundle them up and throw them into the maw of Yogg-Saron, Hope's End. After a successful defeat of the Old God, the player who collected the fragments would recover the Legendary mace from his corpse.

A wild Fluxadin outside Ulduar equipped with Val'anyr and Tier 2 Judgment Armor.

The mace is a healing item available to Druids, Paladins, Priests, and Shamans (with Monks being added later). The effect provided a chance to place a blessing on the target being healed, Blessing of the Ancient Kings, which lasted for 15 seconds and caused all healing done by wielders of Val'anyr to provide a damage absorption shield worth 15% of the amount healed to the target. 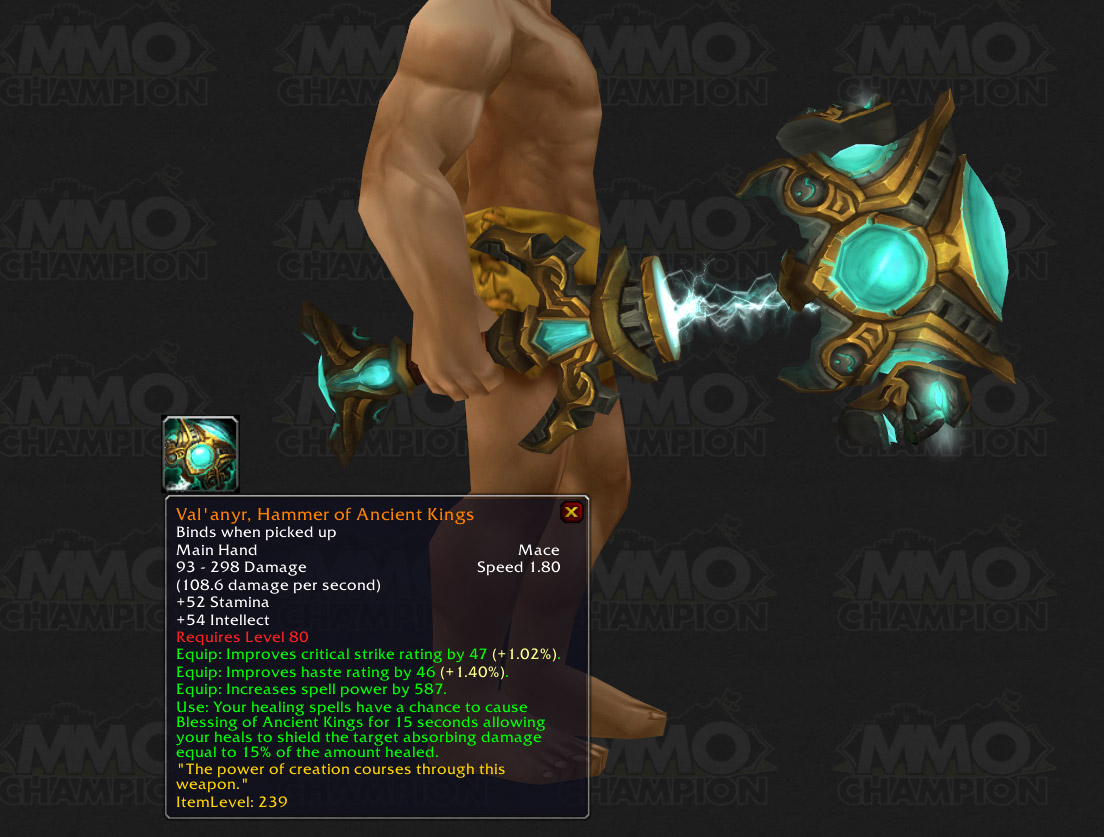 It took months of hard work to get a single mace for your guild, but it was worth it in the end. Guilds continued to run Ulduar to equip their heal team with the item well past the raid tier's viability not only due to the overpowered nature of the proc, but also because the item level was upgraded (from 239 to 245) in the next raid tier. It was so good that Blizzard was forced to nerf the proc rate for players above level 80 leading in to the next expansion, Cataclysm (featuring Deathwing!), because it would have continued to scale. The item was also plenty of fun to those who took it out in Arenas and Battlegrounds, it was like the Warglaives of Azzinoth Rogues all over again.

Hearthstone isn't the first card game rodeo for this Legendary weapon! Val'anyr was an epic, 1-Handed Mace introduced in the Icecrown expansion set. It has a cost of 4, attack of 1, and strike cost (resources to spend to attack with the weapon) of 4. 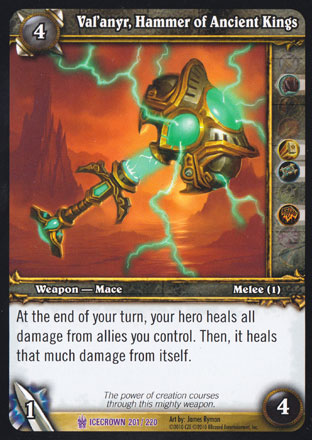 The effect in WoW:TCG was much closer to what players saw out of the World of Warcraft item. "At the end of your turn, your hero heals all damage from allies you control. Then, it heals that much damage from itself.". Hearthstone is the odd one out!