Learn more about BaiZe, her run through events this year, and how she's been doing so far in the HCT Summer Championship in a blog from Blizzard.

This weekend at the Blizzard Arena Los Angeles, the Hearthstone Championship Tour (HCT) has its first-ever woman competing in a seasonal championship. Wang 'BaiZe' XinYu is a well-known Hearthstone competitor in China, and became more of a household name in the Western scene after advancing to the playoffs of the 2017 Hearthstone Wild Open. Her prior performances in NetEase's Gold Series are all notable, but she's making a big entrance on the world stage at the HCT Summer Championship.

Heading into the tournament, BaiZe was already making waves with her uniquely teched deck lists. She's modified a popular Token Shaman with Masters of Evolution, Cult Masters, and the tournament's only copy of Prince Taldaram. While her Zoo, Priest, and Tempo Rogue lists are more in line with what other players settled on, no other player brought the same lineup she did—in part because she's also the only person not playing Druid. Did BaiZe read the field better than her opponents? Read on to find out...

On Friday we spoke to BaiZe about her career leading up to this moment—and she's had some exciting moments thus far. "I started last March with the regional playoffs; we call it the Super Premier, which is the equivalent of the regional HCT playoffs," she said. "This year, in June, I traveled to the U.S. for the Hearthstone Wild Open. Finally, in July, I played in the Summer playoffs."

A lifetime Blizzard fan, BaiZe enjoyed Warcraft III and World of Warcraft before coming to Hearthstone. Besides playing the game professionally, she spends most of her time casting the game in China. What does she get up to outside of Hearthstone? "I enjoy reading and watching movies, and I've also started learning how to play the piano," she said.

Though BaiZe is having fun, that isn't to say that she isn't feeling the pressure, too. "As a professional Hearthstone player, you always want to tell people that you have what it takes to perform on big stages and be great," she said. "I don't want to go out there and have people say to me that I'm just the best woman they've seen play the game. I don't like that. I want to go out there and prove myself." 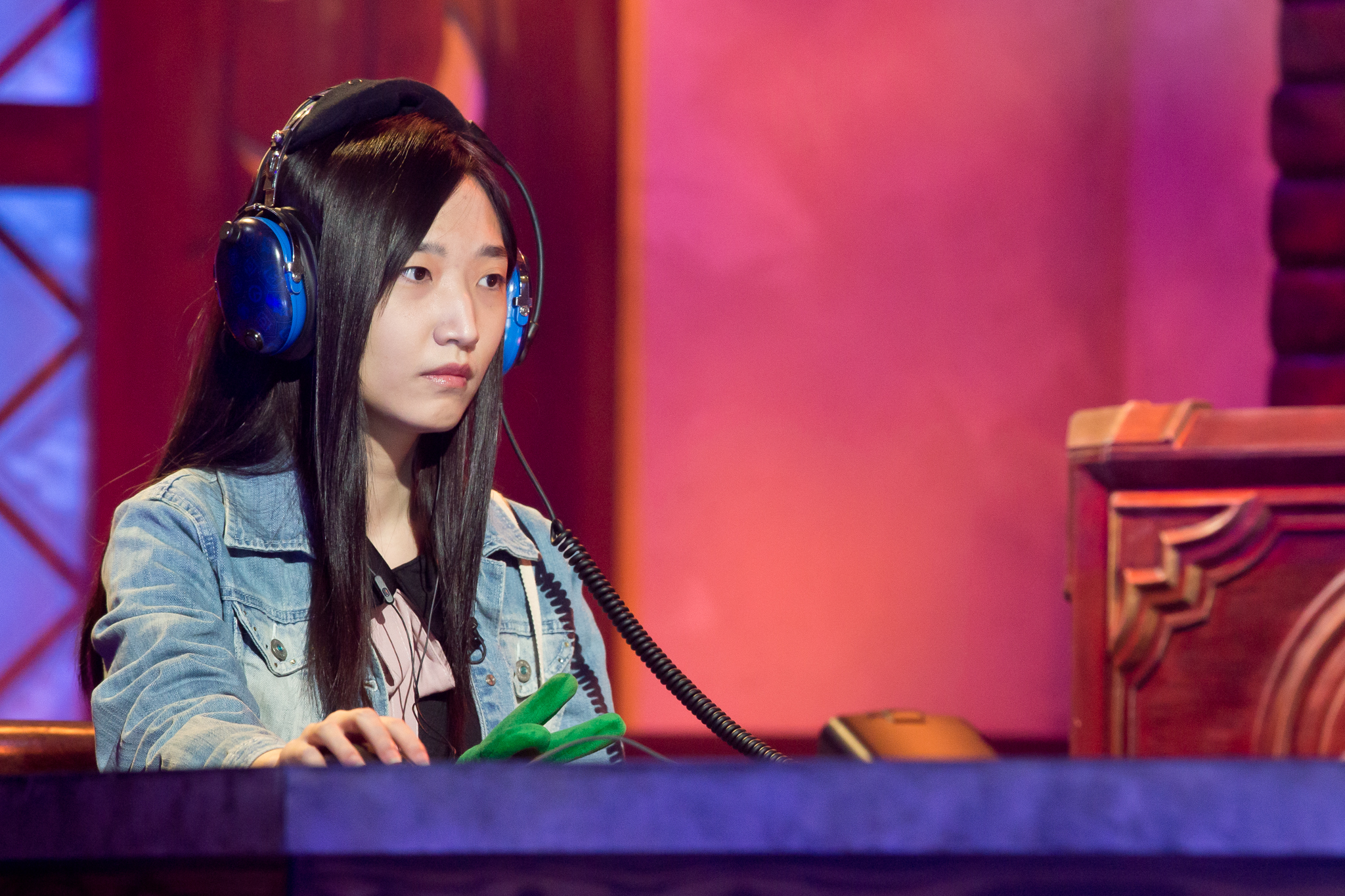 BaiZe's first series against Pavel 'Pavel' Beltukov on Friday was extraordinarily tense. She took a strong lead in the Shaman mirror, but Pavel tied up the series with his Tempo Rogue over her Highlander Priest.

Arguably the best game of day one followed, with BaiZe skillfully navigating the Highlander Priest mirror. At one point, she made an unexpected call with the 5-cost potion from Kazakus, holding it to confuse Pavel's read of her hand, and then executed a powerful swing turn using Lyra the Sunshard after baiting Pavel into a defensive Priest of the Feast.

Sadly, in the fourth game, BaiZe's Rogue deck fell to Pavel's Shaman, and game five was decided by a series of underwhelming draws for BaiZe as both players exhausted their hands.

Regardless of the outcome, it was a thrilling series, and case in point why BaiZe has to some extent been the talk of the tournament. She is thankful for all the new fans she's accrued this weekend, and wishes they'd follow her on Weibo—a Chinese microblogging service similar to Twitter—but admits, "It might be a little tough for my Western fans!"

Her whole heart has been in Hearthstone for the last few years, and she says she had been feeling as though she had hit a bit of a ceiling. "If I get another opportunity to compete in HCT, I'll come back much stronger," she proclaims, adding that her fans will still see her on the caster desk regardless.

She also shared some insight into her much-discussed Shaman deck. "There are two Shaman cards that I dislike that are prevalent in most people's decks—Mana Tide Totem and Thing from Below," BaiZe said. "I don't think they're effective against all the Druids and Rogues. I wanted to switch to something that was more aggressive, and thought Masters of Evolution and Cult Masters would work. All of those 4-cost minions left room for Prince Taldaram, which is a flexible and very interesting card to play around."

Watching BaiZe take on defending world champion Pavel and compete in Los Angeles has been amazing, and we hope to see her again in future tournaments. What did you think of her matches? Let us know in the comments!