Knights of the Frozen Throne is Hearthstone's Next Expansion

A new expansion for Hearthstone is releasing in August! Knights of the Frozen Throne will be adding a few brand new mechanics to the game so check out everything that is being added below.

Five new cards have been revealed along with a new hero power that goes along with Deathstalker Rexxar. 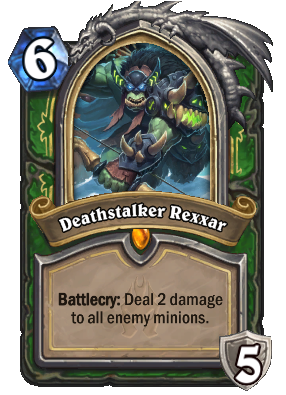 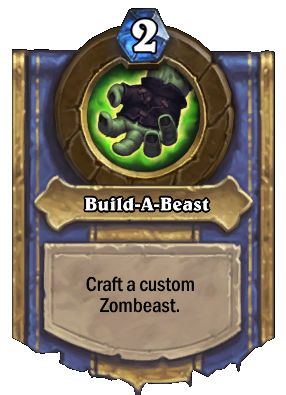 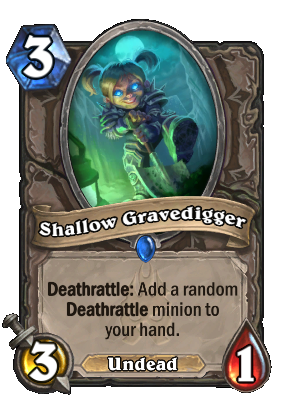 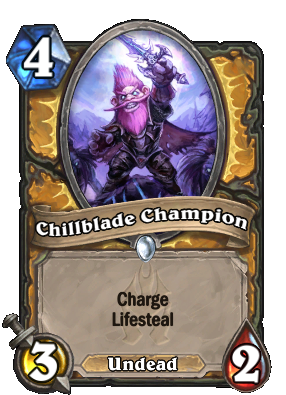 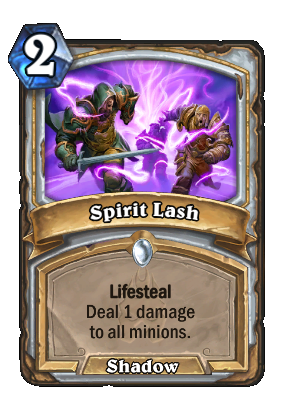 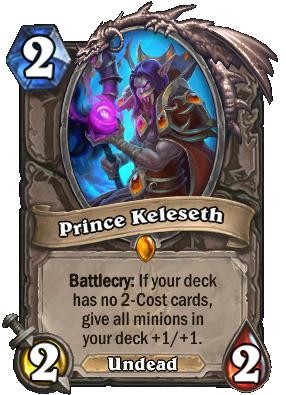 A new card back is available to those who pre-order the expansion. Frostmourne can be yours for $49.99. 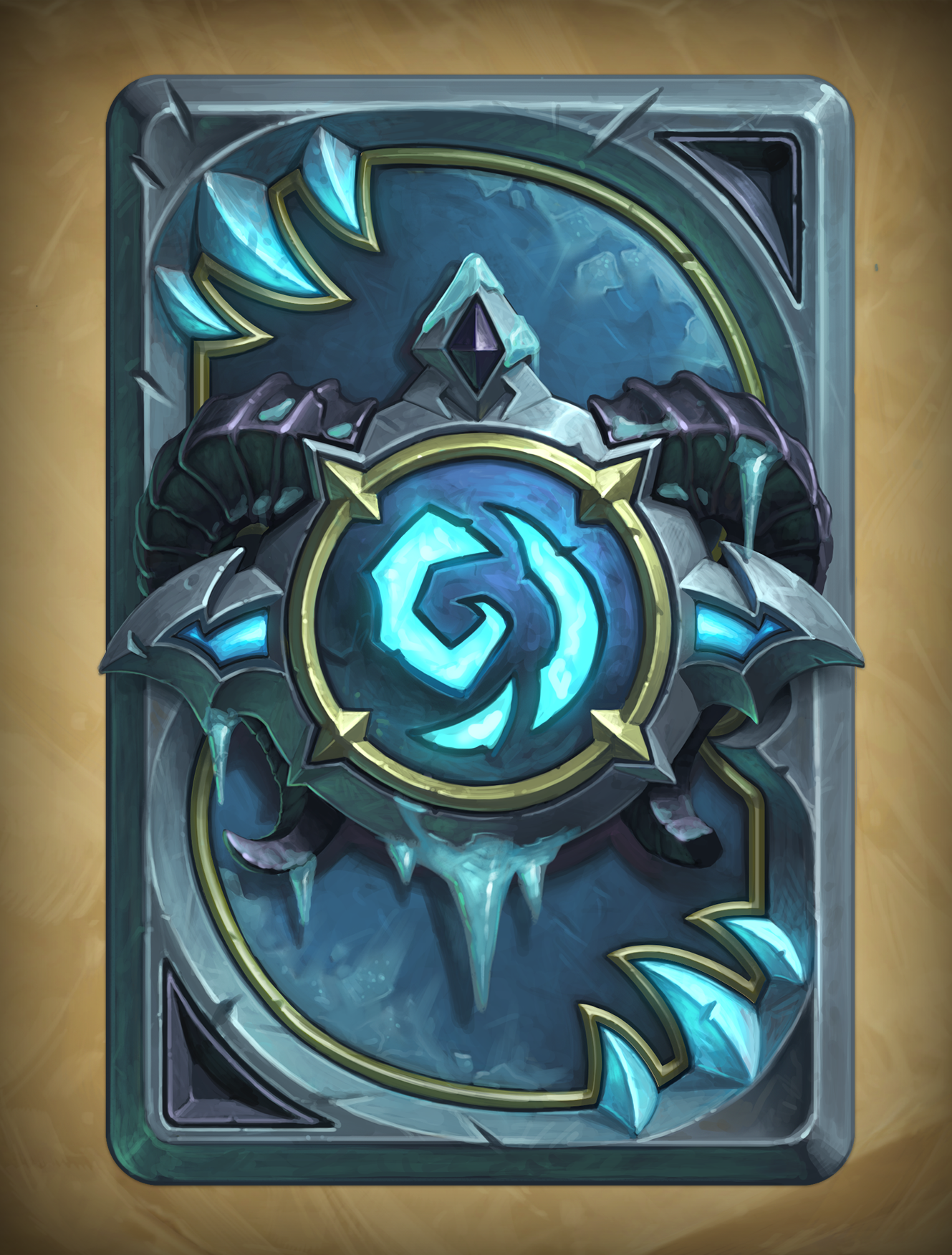 Our usual expansion guide is live!
Updates to this will not happen until post event. You want to be right here on this news post for the latest and greatest news! 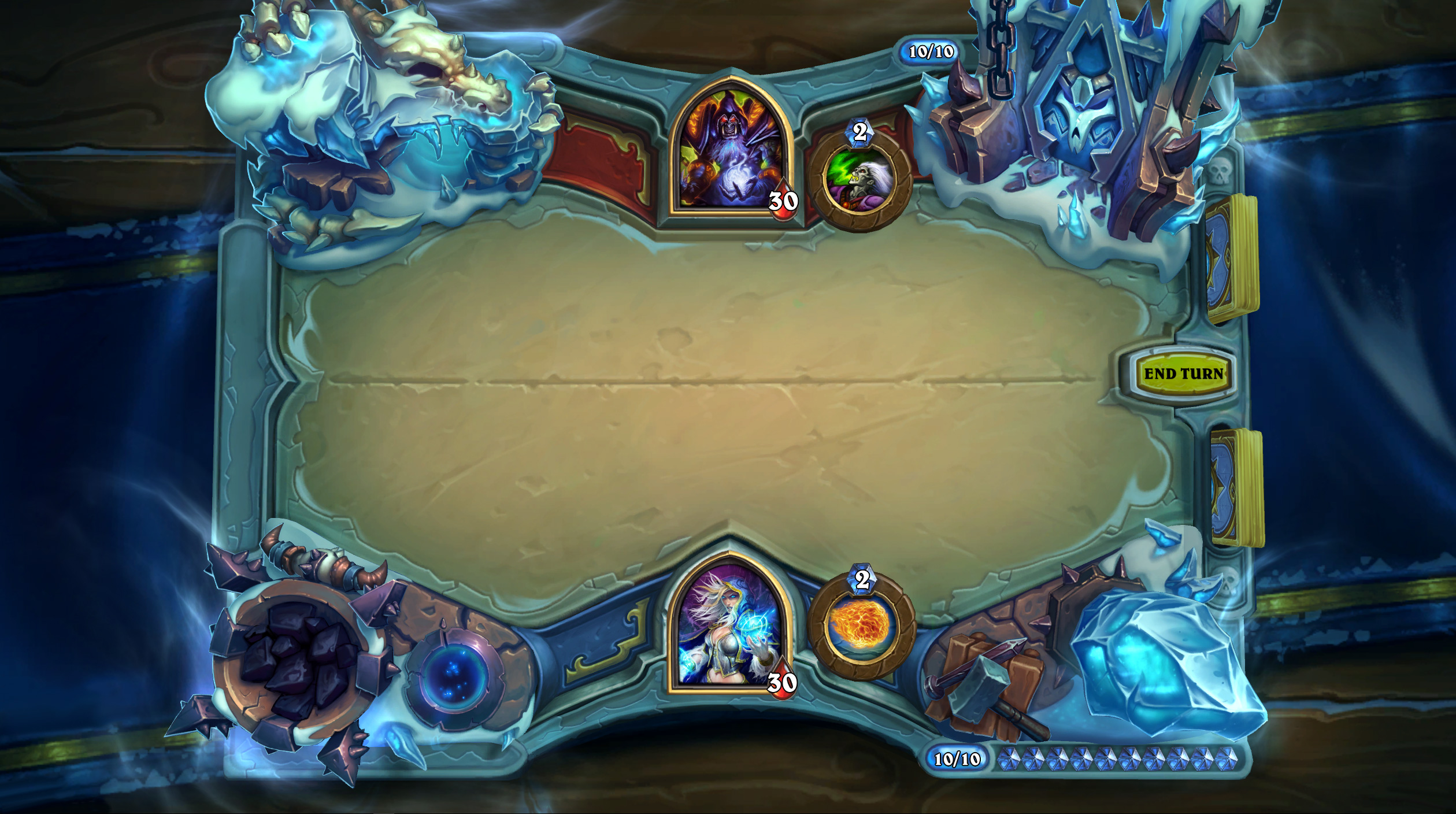 The Scourge. Death Knights. The Lich King. These are among the most frightening, tragic elements of Azeroth’s past. The awful beings residing in Icecrown Citadel are dark, brooding, and terrifyingly powerful… but also really, really cool! The Hearthstone team knew they wanted to explore the story of the Lich King and his horrifying minions, but how to visit such grim themes while preserving the game's friendly and whimsical spirit?

The answer was obvious: kill EVERYBODY!

Well, not everybody. Just all nine Hearthstone heroes. . . In Hearthstone’s next expansion, Knights of the Frozen Throne, we ask the question: what happens when the heroes fall from the light? When the Lich King raises them from the dead as Death Knights, what will they do with the immense and terrible powers he gives them?

But who is this Lich King we speak of?

The Lord of the Scourge

The tale of the Lich King is a tragic one. It is the story of a young hero willing to take any risk and employ the most extreme measures to save his people. His fear and desperation drove him to take up the cursed runeblade, Frostmourne. While he did gain great power in the process, the promise of power was a trap. The evil in the blade consumed him, setting him on the path to become one of the most powerful and horrifying beings in existence: the Lich King.

As the Lich King, he manifests his strength in the physical realm as the strongest of the Death Knights—commanding power over mortal blood, freezing ice, and unholy corruption. When combined with the soul-devouring hunger of Frostmourne, he is an unstoppable, armor-clad juggernaut. If that weren’t enough, he also controls the vast undead army known as the Scourge from his Frozen Throne atop Icecrown Citadel.

All told, the Lich King and his minions represent one of the greatest threats to life on Azeroth. Foremost among those minions: the Death Knights! 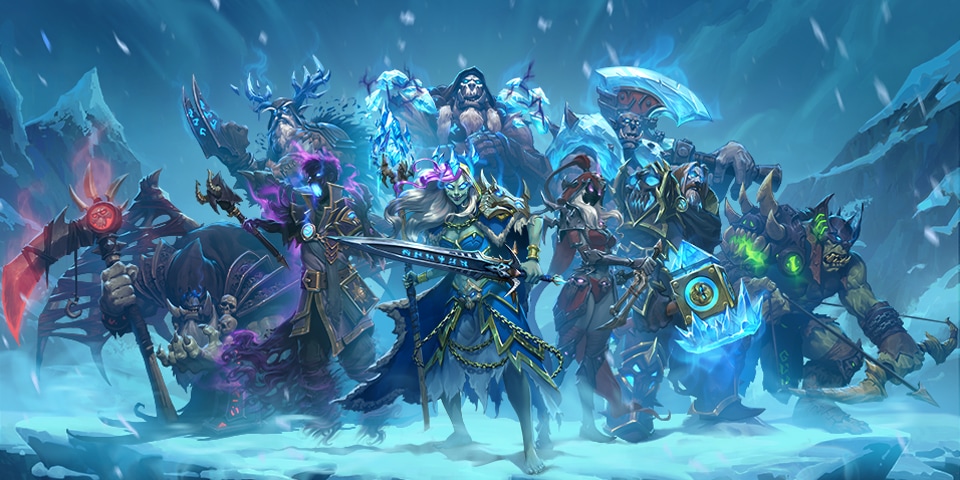 Dead and Loving It

Each Death Knight was once a mighty hero of Azeroth—but after the Lich King raises a hero from the dead, they gain unimaginable strength from beyond the grave. In Knights of the Frozen Throne, each of Hearthstone’s nine heroes has embraced the Lich King’s dark power to serve him as a Legendary Death Knight Hero card! Despite their transformation, they have not fallen completely under the Lich King’s sway, so it’ll be up to you to decide how to wield the awesome abilities at their command.

Hero cards are an entirely new card type that are neither spell, minion, nor weapon. When played, each Death Knight Hero card replaces your hero, casts a Battlecry, dons some hefty armor, AND provides a new Hero Power. While each Death Knight hero is different, they all offer possibilities that can transform the way you play Hearthstone. 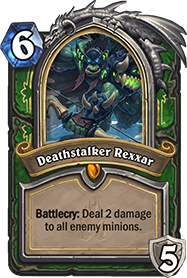 When Rexxar’s hunt came to a premature end, he was resurrected as Deathstalker Rexxar. When played, Deathstalker Rexxar fires a flurry of arrows—dealing 2 damage to all enemy minions—and replaces your hero, granting 5 armor and changing your Hero Power to Build-a-Beast.

Build-a-Beast allows Deathstalker Rexxar to stitch together a horrifying new Zombeast by ‘Discovering’ pieces of two former animal friends. The new creation combines all the stats of both creatures he’s sewn together; mana cost, attack, health, and card text. The beastly abomination is then added to Deathstalker Rexxar’s hand to later be unleashed on a hapless foe.

Terrifying indeed! Of course, there are many other threats to found within the Scourge.

Death Knights may be vicious combatants, but they are only a small fraction of the Lich King’s monstrous army. The legions of the Scourge are a menagerie of ravenous undead beings, from lowly ghouls and zombies to hulking, unspeakable abominations that have been stitched together from the flesh of countless victims. The teeming armies of the undead are as gruesome as they are deadly—so you can expect to find some potent abilities among their number! 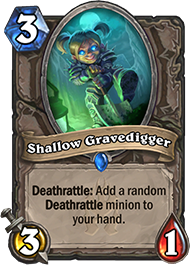 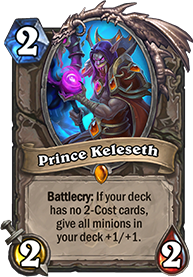 Some of the Lich King’s spells and minions have the awful power to draw sustenance from the very life essence of a victim: Lifesteal. Lifesteal expands on an ability already found on some cards and gives it a new dedicated keyword. When a card with Lifesteal deals damage, your hero is healed for the same amount. A useful ability to have at hand when you’ve already got both feet in the grave. 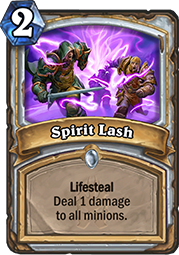 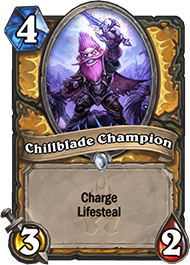 The first steps you’ll take to join the Knights of the Frozen Throne will be within Icecrown Citadel. There you’ll be faced with eight Missions – new single-player content for Hearthstone. Beginning with the Prologue, and then proceeding through grueling battles with Icecrown Citadel’s mightiest denizens, your trial will culminate in a showdown with the Lich King! 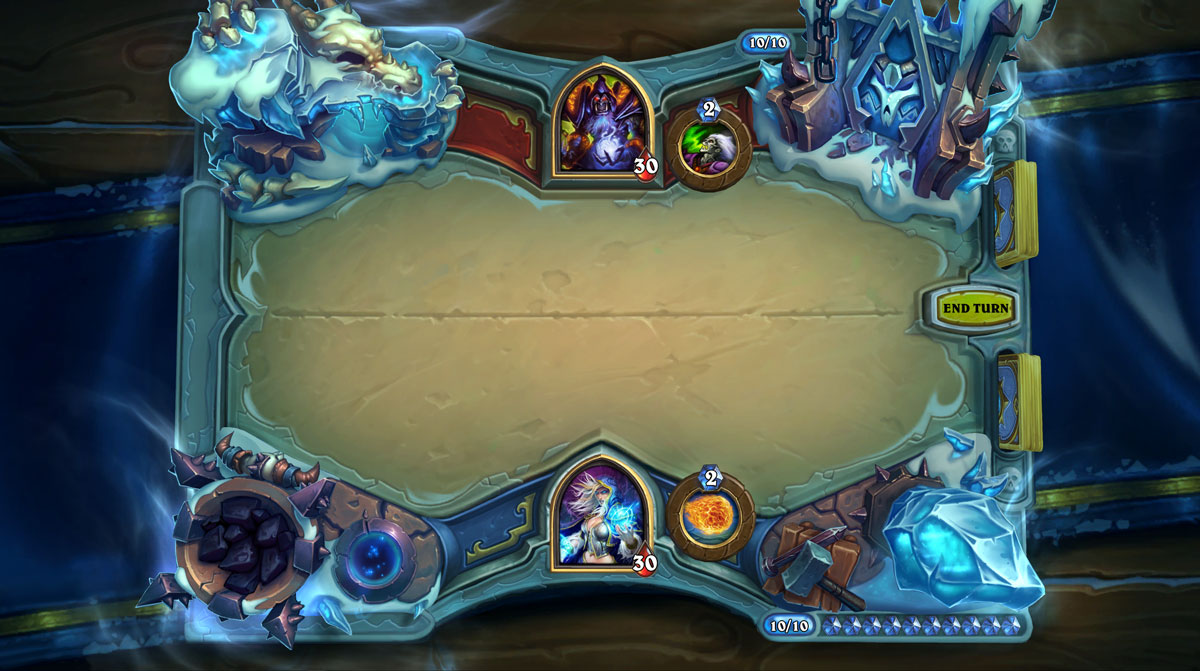 Be forewarned! You may find that these are unlike the battles you’ve fought in the past. The forces of Icecrown Citadel are dangerous, and only the determined will prevail. The Lich King himself is a fiendishly difficult opponent, and his tactics will vary when facing each of the nine Classes.

Though you risk your soul merely by entering Icecrown Citadel, the Missions will cost you nothing! The rewards for braving them, however, are enticing indeed: after completing all the Missions, you’ll receive a total of three Knights of the Frozen Throne card packs. Completing the Prologue mission will also add a random Legendary Death Knight Hero card to your collection!

Pre-Purchase Knights of the Frozen Throne

The Lich King rewards devotion. Visit the Blizzard Shop and Pre-purchase 50 Knights of the Frozen Throne card packs for $49.99 USD and receive the soul-devouring Frostmourne card back now. 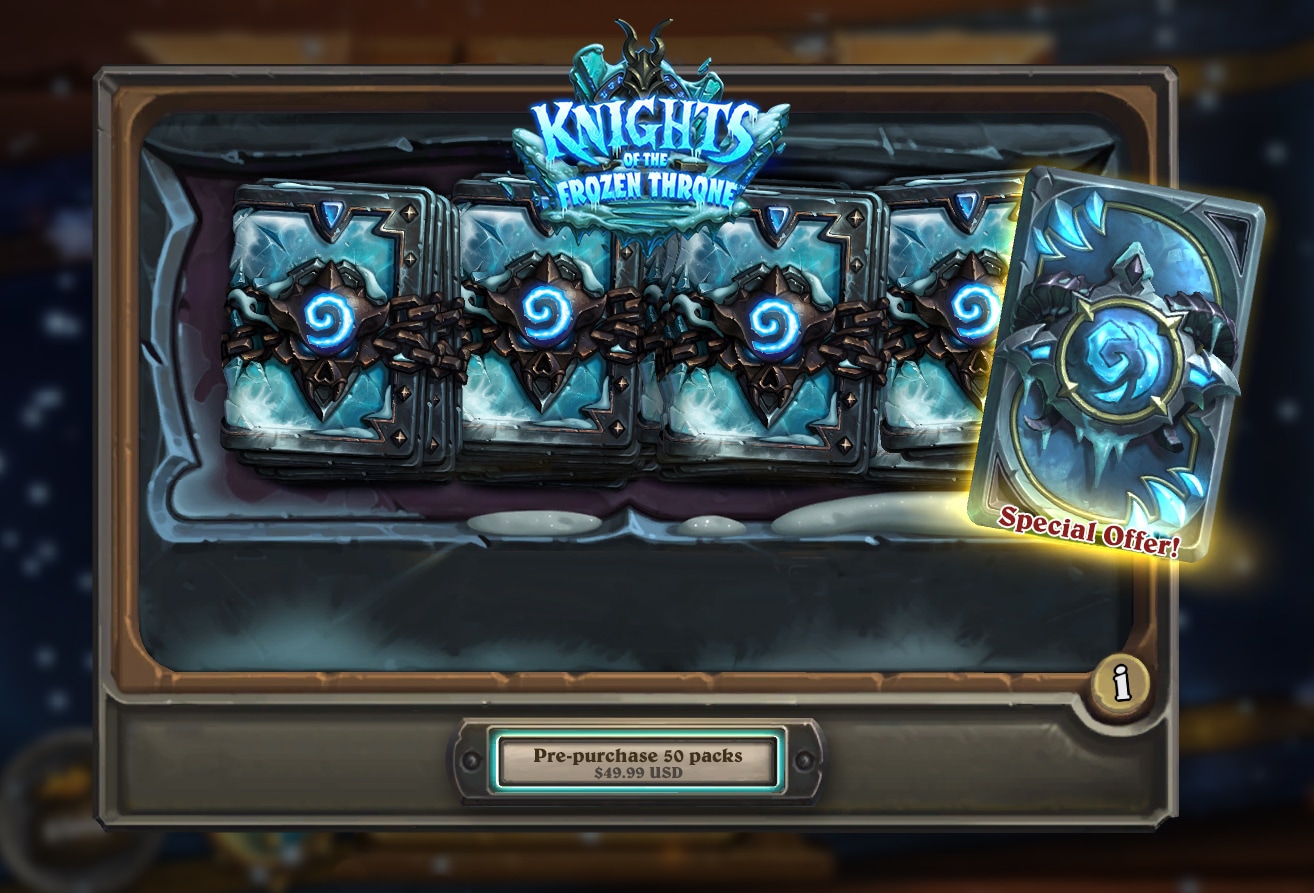 You will receive the Frostmourne card back and your packs as soon as your purchase is processed, and you can break the seal on your card packs once the expansion is live in your region in early August.

The dark walls of Icecrown Citadel loom are looming, but you can prepare for the trials ahead by visiting the official Knights of the Frozen Throne site. Hints of the Lich King’s influence pierce the mortal realm even now. Find them on Facebook, Twitter, and YouTube.

We look forward to seeing what you will accomplish with the tremendous powers of the Death Knight when you join the Knights of the Frozen Throne!

Although you can't make use of this offer for the new packs yet, you can collect cards on the cheap from expansions by using Amazon Coins. It does require an Android device though since you need to install the Amazon Underground Appstore in order to get the correct Hearthstone app that lets you redeem the coins.

So go buy some Amazon Coins at a discount to get cheaper packs! You can save your coins for the launch or spend them on older packs now. Be sure to visit our guide to learn more about Amazon Coins.