China's Heroic Brawl has been delayed a week and replaced with what is a new version of Encounter at the Crossroads which has an interesting modification - Party Crashers! These minions are 4-mana 3/5s which have Taunt and attack automatically at the end of your turn into your opponent's face.

This brawl rewards players with an Un'Goro card pack, which can't be opened until the expansion releases in April.

Maybe we'll get this Brawl mashup next week when China gets their Heroic Brawl, but no official word has come out yet on that or if we'll be seeing Un'Goro packs from any future Brawls. 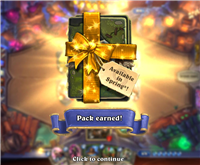 Thanks to /u/VinnyKappa on reddit for the information and screenshots.

What is truly interesting about this Brawl is that it looks like this is a mashup of two different Brawls; Encounter at the Crossroads, and a new Co-Op Brawl that is incoming which celebrates the Year of the Mammoth, which we datamined in Hearthstone Patch 7.1 last week.

This Co-Op Brawl looks like it's going to hit somewhere around the launch of the Year of the Mammoth, more likely afterwards due to a client string that states we are celebrating the year itself, which is traditionally done after it actually begins.