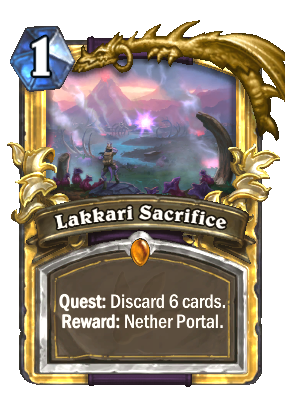 Ahoi, this time it's a non-rogue wild deck from me. I had a lot of fun with this semi-competetive Quest Warlock utilizing the Malchezaar's Imp + Cataclysm Combo to clear the board and instantly finish the quest. This combo deck might be confusing when you first look at it, so let me explain everything.

What is the game plan?

At turn 4 - 6 you usually play Malchezaar's Imp + Cataclysm combo to clear the board, finish the Lakkari Sacrifice quest and refill your whole hand

Depending on how aggessive your opponents deck is, you need to use removals/heals before you can finish the quest

This deck has a lot of removals and heals, so after we completed the quest and drew a bunch of cards we have good comeback mechanics.

Your win conditions against Control decks are: Nether Portal, Kazakus and Bloodreaver Gul'dan

It's okay if we discard Reno Jackson, Kazakus or Bloodreaver Gul'dan since Nether Portal can win games on its own but if you draw some of them in late game it's ridiculously strong

Freeze Mage (the OTK versions only)

The mulligan in this deck is the easiest part, since you keep those cards in all matchups and throw everything else away

Keep in mind this deck is still a 'fun' deck but in the right meta it can be really strong. It has good matchups against most token/minion based decks which try to fill the board. Your bad matchups are mostly other combo decks, which is kind of a problem since alot of meta decks right now are combo decks.

Let me know what you think, any suggestions are appreciated since this deck is completly new and undiscovered.