Not so unknown but in reality - unknown. Designer of JOKE Shaman that shifted wild meta, creator-precursor of competitive Hunter deck in Gadgetzan meta and big fan of cookies with pieces of chocolate. 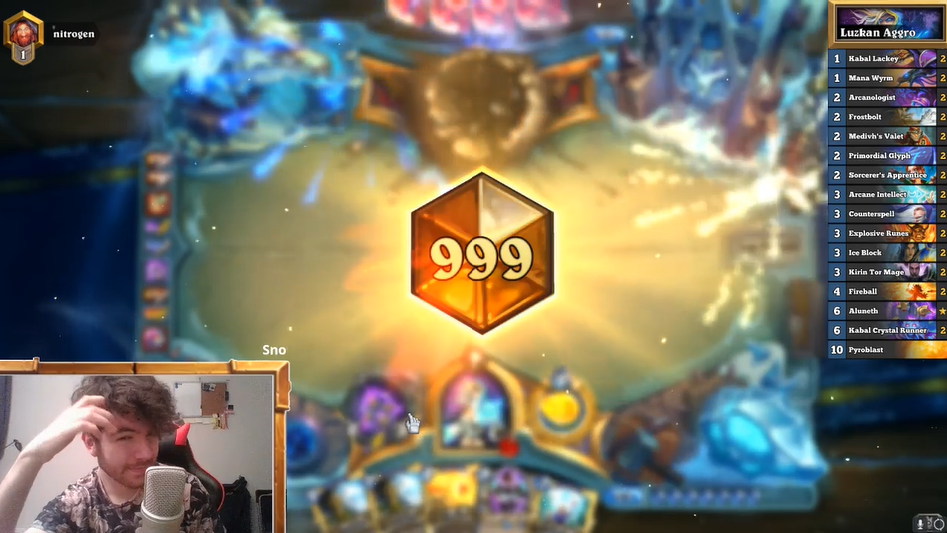 With Medivh, The Guardian (old Tempo Version of the deck, start of the expansion): 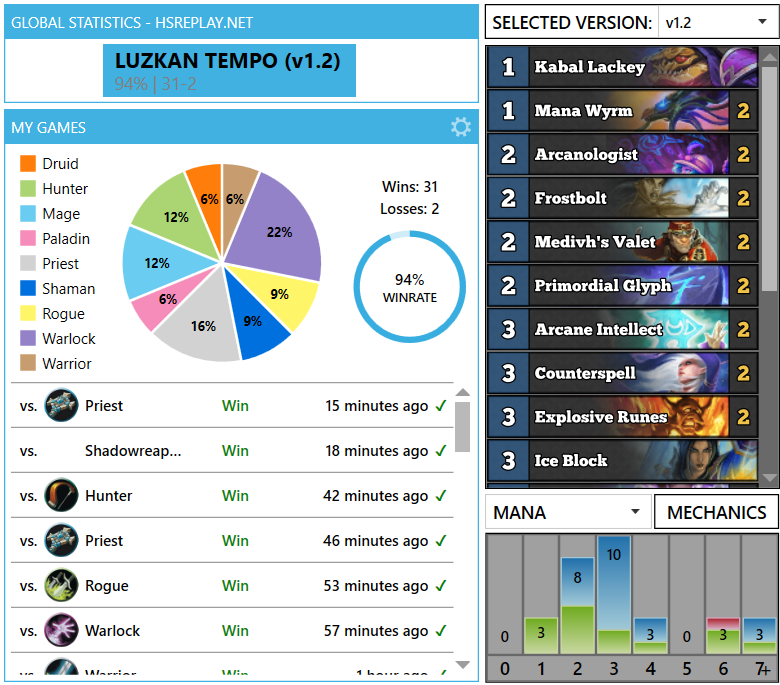 Have fun with this deck when everyone will just pull out crappy decks like we always do at the start of new season. I'll try to polish this deck as soon as meta settles but at this moment it's a rush climb to legend.

If you are guys interested in watching a stream with strategy and explanation behind plays then visit my stream. Answering to all questions! :)
It's up everyday from 19;00 to about 22:00.
https://www.twitch.tv/luzakk30

The Meta actually isn't random anymore. Now mulligan is key to success. Here is the general good-to-go mulligan phase, but for all the details that from time to time give you an additional win - check out my stream! :)

(Mana Wyrm / Arcanologist / Frostbolt / Primordial Glyph)
You can never go wrong with those. But not only that.

2. Why this deck rekts things:

It's pretty much self-explanatory.

3. Matchups (of updated version) of the deck:

Just in case you are wondering.

I switched from Tempo to Aggro at 11/12/2017. By that time my winratio again went up. I highly suggest the new Aggro version the higher in ranks you are. To play the old tempo just switch these cards back:

This is a live guide/deck/thread. As long as I have time for it, i'll keep this updated.

You can check my other decks:

If you have any questions - just ask in the comments. Cheers!

In this spoiler is just old text about Tempo version of my deck. It's still working so if you want to have a read, here it is! :)

1. Testing at this moment:

The fallowing is old and outdated.

Using the suggestion from user "targeting" i swaped Bittertide Hydra for Medivh, The Guardian. Didn't impact the winratio right now - I mean - winstreak is still going, altough felt much better in Priest matchup where I can stop drawing from the legendary weapon and get huge value out of Firelands Portals. Slot 5 is anyway almost busy due to 3+2 mana cards in the deck (including reduced price of Kabal).
[ Bittertide Hydra | Medivh, the Guardian ]

So we ran into some problems sadly. The deck was meta defining and as a result other decks pop-out as a counter to this deck. Deck has no longer any problems aside from Aggro Paladin. Rekts everything else.

There are two decks that ruins the free legend every time for players using this deck.

Spell Hunter (43% WR) and Aggro Paladins (46%) are very good against our Mage. That wouldn't be a problem right? Only two decks are prepared to destroy us. But... not really if these two decks are the most popular decks on the ladder.

So what can we do about it?

Here comes the help with tech cards. But... it's not that easy actually. Spell Hunter is spell based while Aggro Paladin floods the board. Eater of Secrets works only against Hunter (and it's a weak tech choice, cause he will be playing secrets on turn 2 and i'm not sure if 1 eater of secrets will have any impact on the game). Gluttonous Ooze works against Eaglehorn Bow and in other matchups it can have an impact as well - like Pirate Warrior or Legendary Weap from Warlock etc. 3/3 body for 3 isn't as terrible as 2/4 for 4. So it's and improvement but is it enough? And it doesn't really help against Aggro Paladin. I was thinking about Frost Nova to stop the board from killing us while we are looking for the finishing burn cards. Maybe a second Ice Block? That's really hard to wrap my mind about what will be the best in that situation.

Overall if you just play the deck, you'll still win about 60% of time. It means that if you play, let's say, 1000 games, you probably will win 600 games and lose 400 of them. So if you are desperate enough, you can hit easy legend that way ^^. Looking for a discussion about the tech cards in the comments! :)

Some stats and tips. Kinda old, but still okay.

Turns out this deck is insane - hitting global 60% winratio.

Deck is stomping on all clases except it's even (50% wr) against Paladin and bad against Hunter (43% wr). Hunter is a great counter due to playing no minions and making our deck really meh to play against that. I'll copy here my comment about that situation:

"Do not keep Frostbolt without Mana Wyrm / Arcanologist / Primordial Glyph. Generally you wan't minions and pressure. Don't keep Kirin/Kabal if your secret is Explosive Runes.

Hunter is the control, Mage is the aggro in this match up. Pressure him. Throw cards for tempo even if they don't bring you value with their battlecries unless it's highly not recommended by the situation on the table. Keep in mind that they have 6x removals that deal 3 damage (sadly that's the number of hp on most of our creeps). But so - 4 of their cards summon 3/3 wofles and our cards are great at dealing 3 dmg as well.

Most importantly: HUNTER'S CANT HEAL THEMSELVES.

While tempo-ing out also deal little bits of damage to their face and pay attention to the cards in your deck. What's the chance of drawing lethal in 1/2 turns? How to set up a burn plan? Etc."